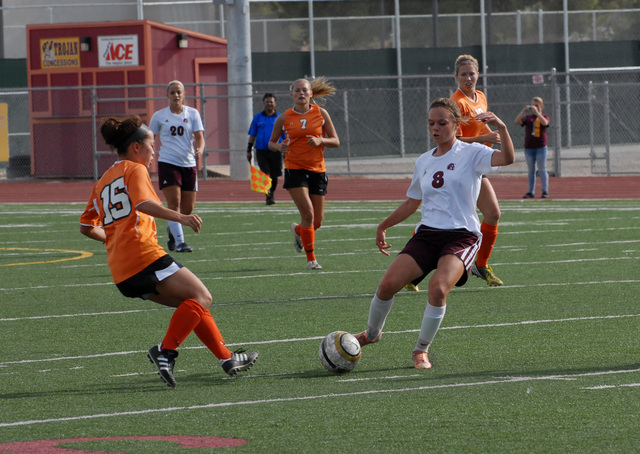 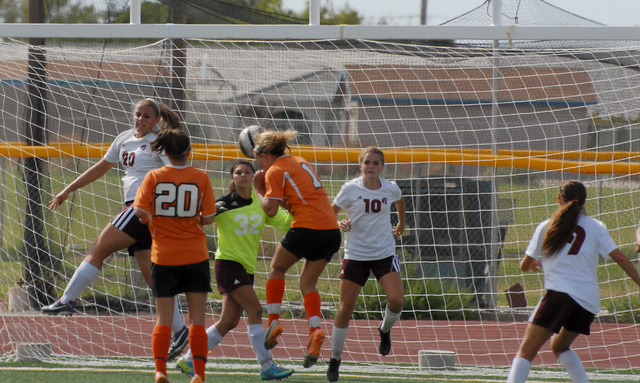 After losing seven seniors last year, the Trojans didn’t have the talent developed yet to stop an experienced Douglas team. Douglas came down from Northern Nevada to play Centennial, Boulder City and Pahrump. Douglas defeated all three teams.

The Trojans had a good half and held the strong Douglas team to just one goal at the halftime.

Lexi Smith, who played defense for the Trojans all four years and will be playing college ball soon, said the Trojans defense was a work in progress and was coming around. “On the outside it’s hard to figure where the ball is coming from. So it’s about learning the positioning and learning where the ball is coming from,” Smith remarked during halftime.

The bottom line Smith said is that the girls are young and just need to learn to communicate better. The Trojans defenders consist of senior Brittany Klenczar, who has played on defense for two years. She knows the position and knows where to go. She is back there with two other veterans, Ashlyn DiBlasi and Maddeline Pereira. Sabrina Lunetto did well and hopes to make the starting lineup.

The Trojans have a strong midfield. Alyssa Turner was used as controlling midfielder because of her strong presence and her strong leg. Freshman Sydney Dennis made her debut as a midfielder and gives the midfield some speed.

Paige Chafee is the player the Trojans will depend on to score. She scored the only goal for the Trojans and with her speed she should score a lot more this year.

Douglas Coach Warner Christian was aware of the Trojans rich soccer tradition. “We knew this game would be tough and that is why we wanted to play this game. We knew playing them would make us better. I also knew they are building a little bit. This was a nice physical game for us,” the coach said.

His team beat Centennial 3-0 and beat a rebuilding Boulder City team 12-0. “This was the toughest game we played. I have seen this team play and they do things the right way,” Christian said.

Trojans Coach Pam Larmouth was positive and not worried in the least after the game. “I say we have four starters coming back and my team looked great despite that. We have a whole new team. It will take us some games and that’s why we played Douglas and that’s why we will be going to that tournament on Sept. 5,” Larmouth said with confidence.

Larmouth said the game may have revealed some weaknesses, but that is not what the last game was about.

“There were a lot of good things going on out there and that is what I want to concentrate on instead of worrying about the weaknesses,” she said.