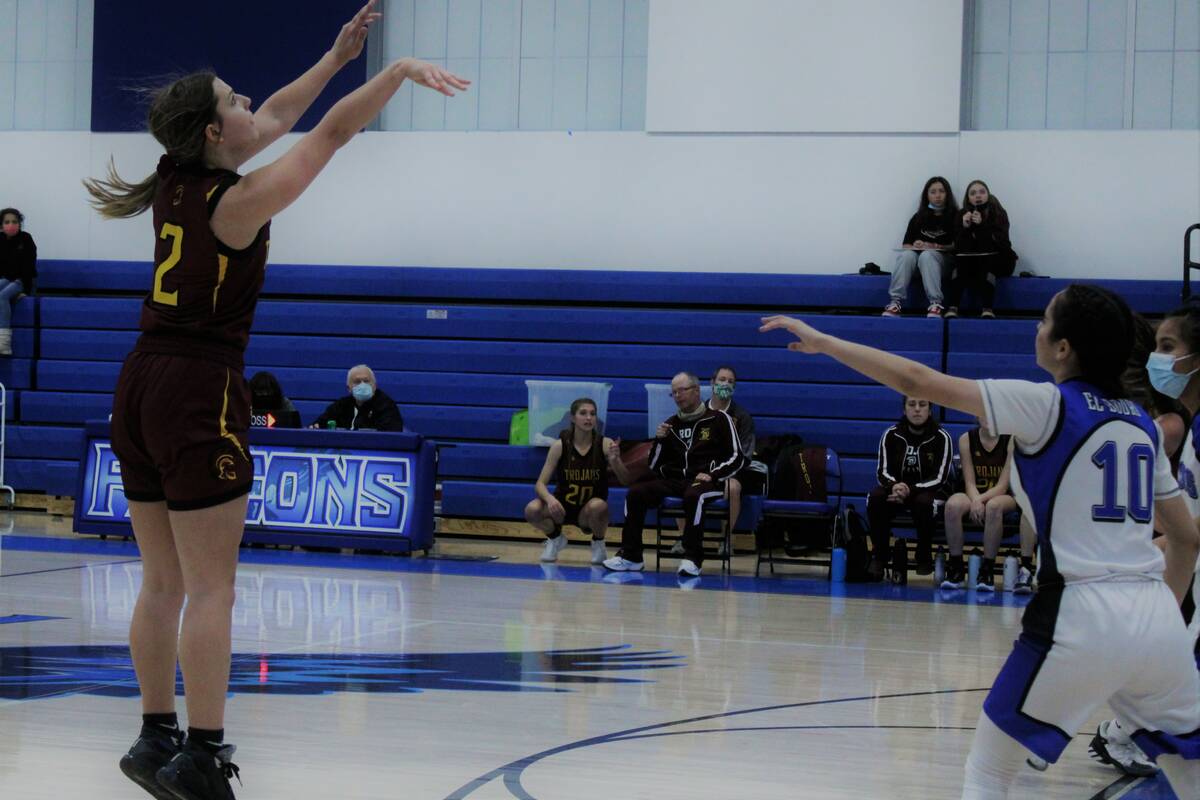 The Pahrump Valley girls basketball team has now won 12 games in a row to start their season. It’s the best start for the Trojans since the 2006-07 season when they started 14-0, before losing their first game to Hurricane High School.

This week, the Trojans participated in the three-day Bullhead Tournament in Bullhead City, Arizona before taking their holiday break.

Pahrump opened their tournament Monday evening with a matchup against the Lake Havasu Knights. These teams played each other twice during the 2019-20 season, with the Trojans winning both games by a combined five points.

This game, however, was a different story.

Pahrump Valley started fast out of the gate and never looked back. By the end of the first quarter, the Trojans were shutting out the Knights 13-0.

Senior guard Tayla Wombaker led the way for Pahrump Valley as she has done many times this year already. She finished the game making seven of her 13 shots, including three 3-pointers, for a total of 18 points.

This was Wombaker’s fourth game of the season with 18 or more points for the Trojans.

Sophomore guard Abbigail Ramos pitched in 12 points, while sophomore forward Kailani Martinez and junior forward Adryanna Avena each helped with ten points of their own.

The Trojans really pulled away in the second quarter as they were able to outscore the Knights 25-7 and take a 38-7 lead into halftime. Pahrump Valley went on to win the game by a score of 67-20.

In the second game of the tournament, the Trojans faced off against the Bobcats from White Pine.

This game went much like Pahrump’s first tournament game — it was over before it got started.

The Trojans shut out their opponent in the first quarter for the second game in a row and for the third time this season.

Pahrump Valley reached a 22-0 lead before White Pine was able to get on the board midway through the second quarter.

Avena and Wombaker led the Trojans in the scoring department with 12 points each. Sophomore Avery Moore pitched in eight points for the Pahrump offense.

A strong defensive effort by Pahrump helped them get another huge win for the season. They defeated White Pine by a score of 44-12.

The Trojans closed out their tournament with a second game against White Pine for the tournament championship.

Pahrump Valley got off to another great start at the beginning of the game and nearly held the Bobcats scoreless in the first quarter for a second consecutive game. White Pine scored their first points in the final seconds to take away the shutout.

Junior guard Peyton Odegard scored all nine of her points in the second quarter, leading the Trojans to a 28-5 halftime lead.

The Pahrump Valley Trojans went on to win the game by a score of 50-11 and took home the tournament championship.

For their performances throughout the tournament, Wombaker was awarded the tournament Most Valuable Player award and Avena was selected to the All-Tournament team.

Following the tournament, the Trojans will be taking a break for the holidays. They will resume play on Thursday, Jan. 6, when they host the Del Sol Dragons. Tipoff is scheduled for 6:30 p.m.