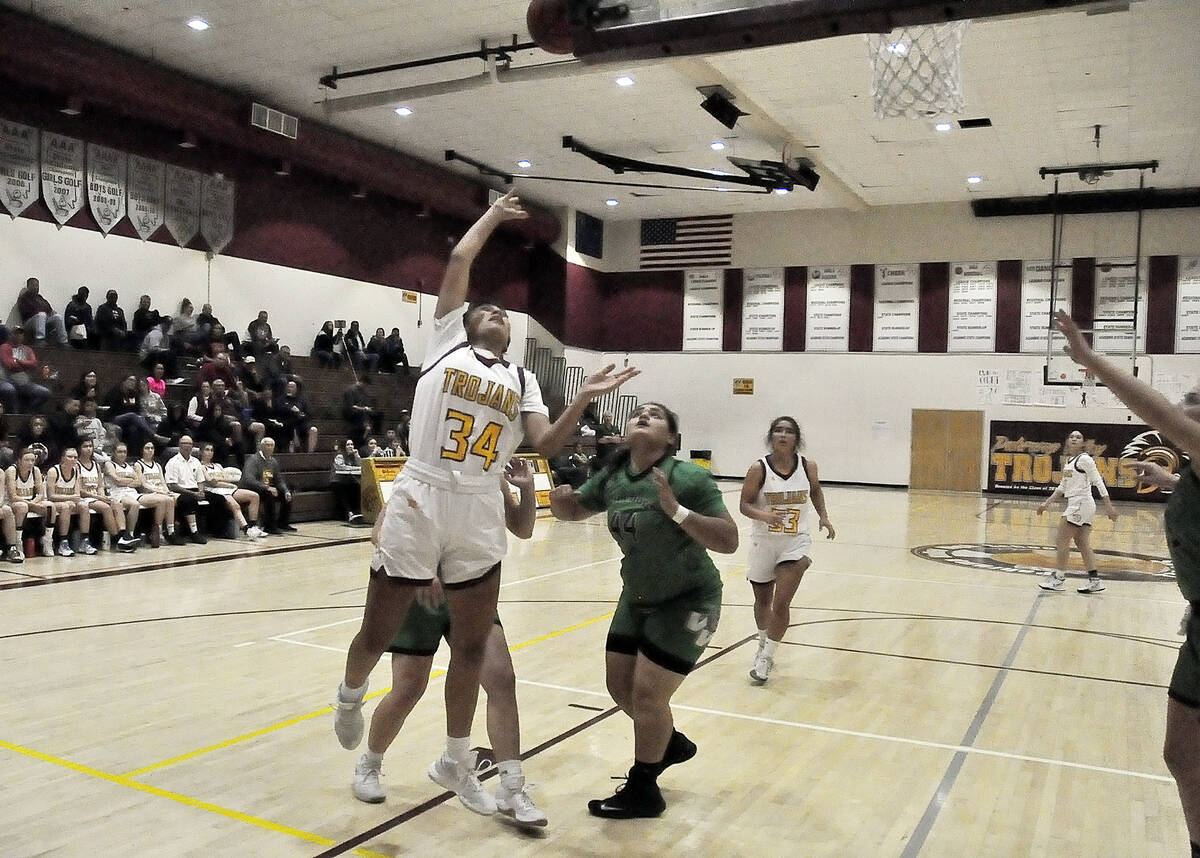 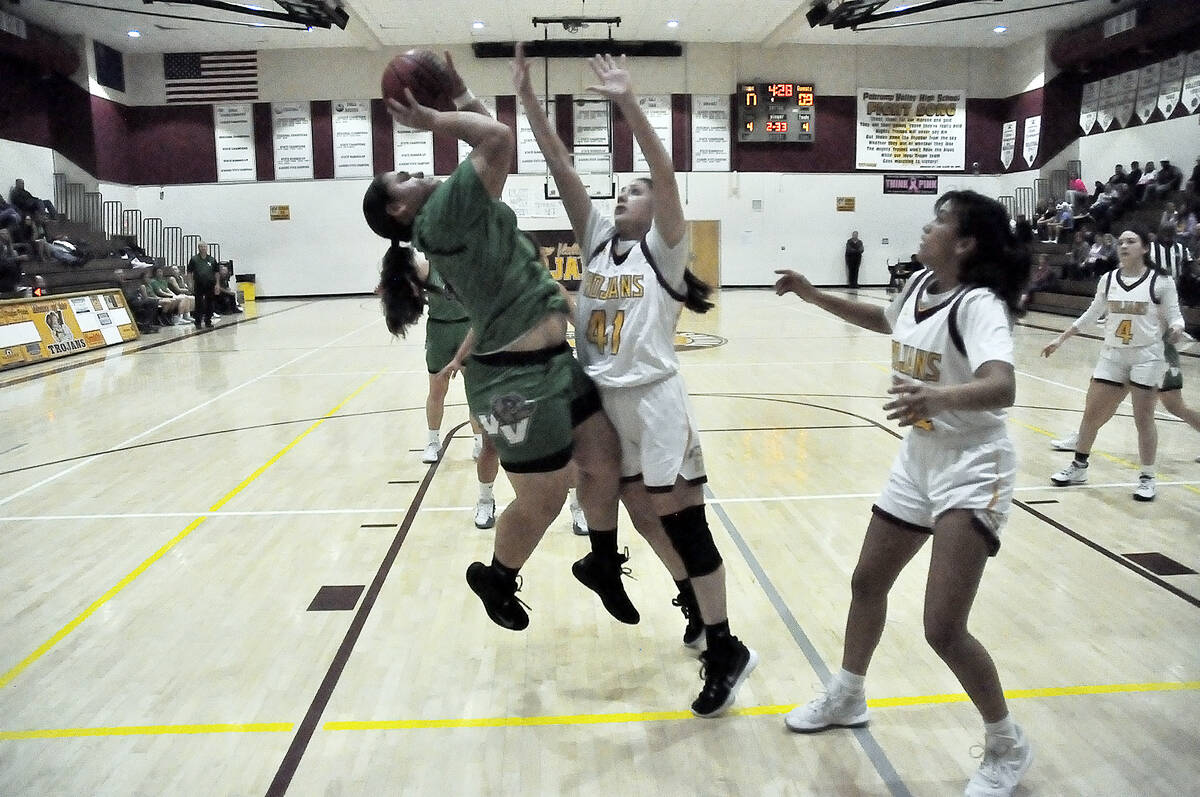 The Pahrump Valley girls basketball team has qualified for the Nevada 3A state tournament following their performance at the regional tournament.

Last week, the Trojans participated in their 3A southern regional basketball tournament. They opened the playoffs with a huge win at home against the Southeast Career Tech Roadrunners on Tuesday night.

With that win, they advanced to the regional semifinals on Thursday night against the Virgin Valley Bulldogs. This game was going to decide the Trojans’ playoffs future – win and they go to the state tournament, lose and they’re out of the playoffs.

At the end of the first quarter, both teams were neck and neck. They were tied at nine points apiece after the opening eight minutes of game play.

Sophomore Paris Coleman had one of her best games of the season. She scored four of the Trojans’ nine first quarter points.

Coleman just barely missed out on her first double-double of the season as she ended the game with nine points and 10 rebounds. She also had six steals to lead the Pahrump Valley defense.

The game was decided in the second and third quarters when Pahrump Valley outscored Virgin Valley 25-4 in those two quarters. By the end of the third quarter, the Trojans were comfortably in the lead by a score of 34-13.

Kailani Martinez finished as the game’s only double-digit scorer. She had 13 points on 6 for 14 shooting. Martinez also added four rebounds and three assists.

The fourth quarter was the only one where the Bulldogs outscored the Trojans. However, it wasn’t enough for Virgin Valley as Pahrump Valley came away with a 43-26 victory.

In the regional finals, the Trojans were matched up against the Moapa Valley Pirates. The Trojans’ only loss of the regular season came in their matchup with this same Pirates team back in January.

Pahrump Valley had their worst offensive game of the season against Moapa Valley. The Trojans scored a season-low 29 points.

Their offense was led by sophomore center Abbigail Ramos, who finished the game with a team-high seven points. She also added four rebounds and two assists for the Trojans.

The two teams found themselves in a 16-16 tie heading into the locker rooms at halftime.

The Trojans were able to outscore the Pirates 8-7 in the third quarter. However, after struggling on offense in the fourth quarter, the Pirates were able to pull away from Pahrump Valley and outscored them 12-5 in the final quarter.

Tayla Wombaker finished with six points and seven rebounds. Four other Trojans scored in the game, all tying with four points apiece. Martinez finished with a team-high eight rebounds.

With this win, the Pirates secured the southern regional championship and they will be entering the state tournament as the No. 1 south seed.

Despite the loss, Pahrump Valley is still guaranteed a spot in the Nevada 3A state tournament this weekend. They are going in as the No. 2 south seed and will be matched up against Lowry High School, the northern regional champions and the No. 1 north seed.

This is the second consecutive season the Trojans have made it to the state tournament. In the 2019-20 season, they dropped their semifinal game to Fernley High School.

Coming into the game, Lowry has a season record of 25-3, including 12-0 in league play. Lowry’s top player is their sophomore forward, Savannah Stoker. She’s averaging 22.7 points per game and 9.2 rebounds per game.

Tip-off for Pahrump Valley’s semifinal game is on Friday, Feb. 25, at 2 p.m. at the Cox Pavilion, located on the campus of UNLV.

If the Trojans are able to get the win, they will advance to play for the Nevada 3A State Championship on Saturday, Feb. 26, at 10 a.m. at the Cox Pavilion. They will play the winner of the Moapa Valley vs. Spring Creek game.