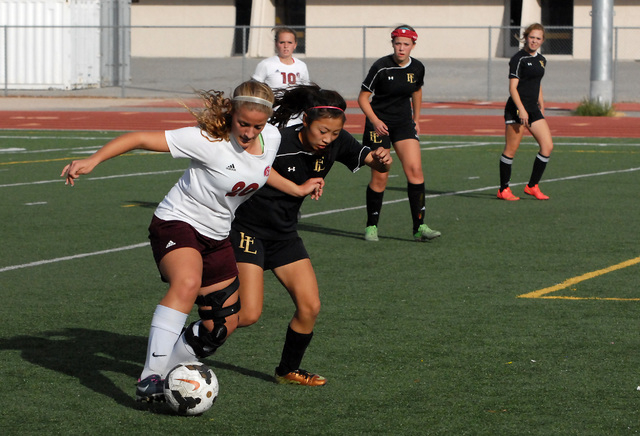 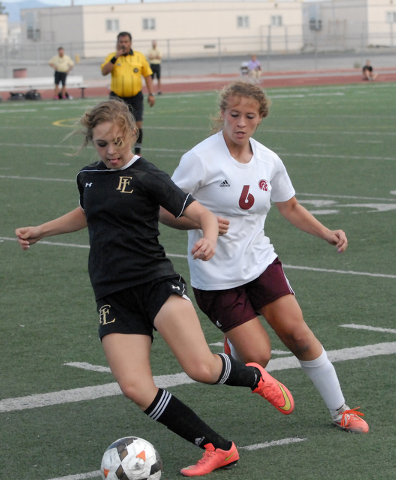 If you have ever watched the Lady Trojans play their rival, Faith Lutheran in soccer you would know that this game brings out a lot of emotions on both sides and both teams play above and beyond their capabilities. It is truly regarded to be one of the best rivalries in high school soccer, with both teams having their share of upsets over each other.

This year’s game was no different. The Trojans played their hearts out in the 1-0 loss.

Prior to the game the team listened to a pep talk via cell phone from Sydney Sladek, who is now a freshman USC Trojan. Sladek led Pahrump in scoring last year with 78 goals.

Senior Alyssa Turner said the former Trojan told them, “This our home and we are family and you all have it in you to win.”

“Just hearing those words from her got me going,” she said.

Faith Lutheran was up for the game too, but they had tied their last two games and the Faith Lutheran coach told Trojans Coach Pam Larmouth that they were pretty badly beaten up.

The game was a see-saw battle going up and down the field, neither team really with an advantage, but late in the first half the Crusaders got a clear shot at the goal and scored with 15:58 left in the half. It would be the only score in the game. The Lady Trojans never gave up and played hard until the end.

The Trojans finished in fifth place (11-7 overall, 8-6 Sunset League). The Crusaders (15-6-3, 11-1-2) finished as Sunset League champions and will go on to the regional playoffs. This was the first time the Trojans hadn’t made the playoffs since the year 2000. This loss to Faith broke a 13-year streak of making the playoffs. Pahrump also had a 4-year streak of state tournament appearances up to this year.

According to the players, the team will have to get more time in as a team. The two years the Trojans won state, 2011 and 2012, they had many players who played on club teams together and so their chemistry was good. They knew how each player would react in certain situations.

Ashlyn DiBlasi: She made the team as a sophomore and was a member of the 2012 state championship team and the state runner-up team in 2013. She was put in the midfield to motivate the team. She is a coach’s dream. She is self-motivated, caring, funny and a great leader. Ashlyn is a champion by anyone’s standards.

Amy Estrella: Amy played midfield wing and right defensive back. She is a starter. She was willing to do whatever it takes to make a contribution to the team. She listens and gives the team her full efforts. There were some concerns at the beginning of the season that she was not aggressive enough to play defense, but she proved us wrong. She is easy to coach and has a great attitude.

Brittany Klenczar: Brittany is the only four-year-letter earner this year. As a freshman she was competing with an entire club team for a spot. That year as coaches we had no intention of bringing up a freshman that year. Brittany brought her “A” game that year. She impressed all of the coaches and returning players. What we didn’t know at the time was Brit brings her “A” game wherever she goes. She started in three state championship games. She has won the coaches award and the defender of the year award, all-academic team each year, all-conference and all-region awards two years running. She has led this year by example and is the co-captain of the team. She works hard and never gives up. No one on the team plays harder than Brit. She is the best defensive back in the league and is a winner on the field and off.

“I will miss everything. Soccer was my most favorite thing throughout high school,” Klenczar said. “I will miss the practices, the games, and the connection you build with your team. You play the thing you love to do most with the people you love most and it’s just over.”

Sabrina Lunetto: She was a starter on the varsity team and played midfield. She has been a real asset to the team. She is aggressive on the field and a sweetheart off the field. Her efforts on the field and willingness to play any position she is asked was an integral part of our team.

“I will miss everyone working as a team together,” Lunetto said.

Terryn Thomas: She came to the varsity team as a senior. This is a rare or unheard of happening. She wanted to play soccer in the position of goalkeeper. Soccer requires eye-foot coordination, which usually needs to be acquired by the age of 12. Terryn did not want to hear this. She came out to practice ready to learn and to go. She is an extremely hard worker and does not mind trying new things. She has done an amazing job as the team’s back-up goalkeeper. She was the only first-time soccer player to make the team. Her hard work and efforts make her a true champion.

Alyssa Turner: Alyssa has been playing for varsity for the past three years. She started as a defensive back and has become one of the league’s best midfielders. She has started in our state championship wins and started in the state runner-up game. She has been our most improved player, defensive player of the year, and has made all-conference and all-regional teams. She is a hard worker and a great example of effort on and off the field. She injured her knee during a preseason tournament and was sidelined for the majority of the season. With the doctor’s permission she came back to play. Despite the injury and dealing with pain, she persevered so she could play and be on the team.

“It has meant everything to me because it was the only sport I have ever done. I put everything I ever had into it. It’s my time to say goodbye to them and it’s really hard. I just wish I had more time here. I have loved every moment,” Turner said tearfully.