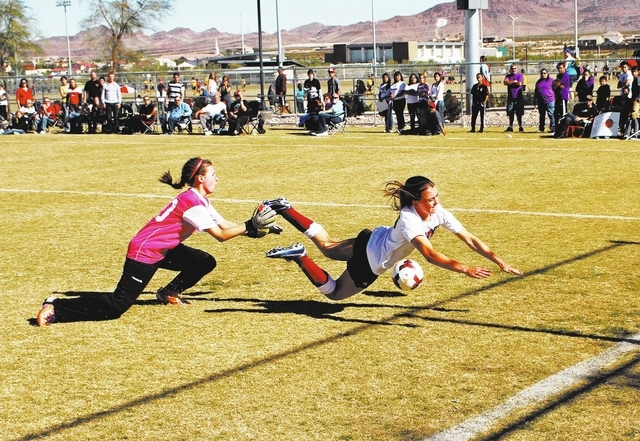 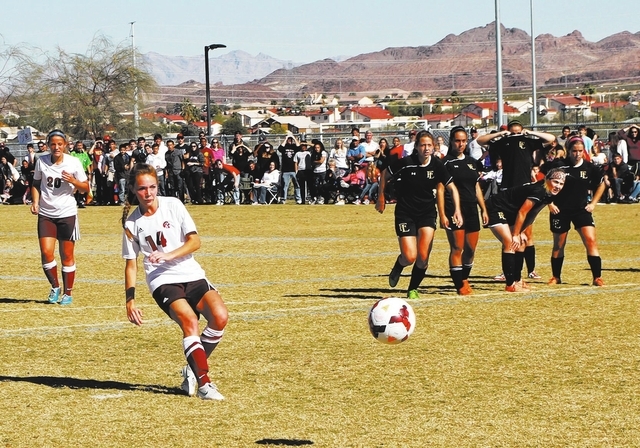 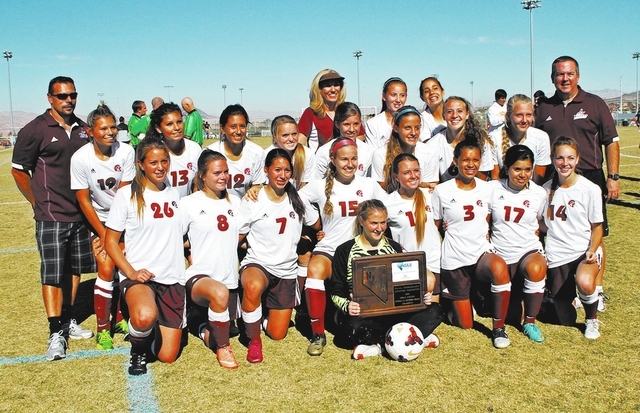 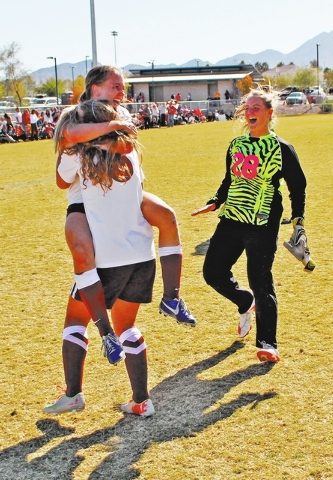 Anytime the Pahrump Valley Trojans and Faith Lutheran Crusaders come together the sparks will fly. Last Saturday for the Southern Nevada Regional Championship when the two women soccer teams came together, it was no different.

The Crusaders drew first blood by scoring in the first 20 minutes of the game, but that lasted only 15 minutes with a goal from the Trojans lead scorer Sydney Sladek to tie up the game.

The two teams took a 1-1 tie into the half and the duel was on.

On a Faith Lutheran corner kick with 10 minutes left to go in the game, Faith scored the go-ahead goal and it was 2-1.

“At first I said, ‘Oh crap, we are running out of time here.’ With this one, we knew we are capable of beating them like we did. We just picked it up,” Smith said.

The Trojans are a team known to keep pounding on you offensively. They look for the slightest weakness and then go for the jugular.

During the game, Faith’s Coach Steve Morrill tried to turn the tables on Pahrump. He must have told his girls they had to stop number 10 Sladek from scoring for Sladek played like she had a bounty on her head. She must have hit the ground at least five times during regulation play.

“I think we were concerned a lot over Sydney being beat up. I think there should have been three penalties against Faith, but they didn’t call them. She didn’t have to say anything, she was staggering a little bit. She was getting beat up pretty bad,” Smith said.

Sladek said she is used to getting beat up.

“I was worried that I would have been taken out by one of my coaches. They asked me if I was dizzy. I told them no. Getting beat up lifts me up a lot. It’s one of those things that helps me progress. They always try to take me out. They try to slide tackle me. It doesn’t work,” Sladek said.

The referees may have been letting the girls play, because they called very little fouls on the hits Sydney took.

As the clock wound down to three minutes, Sladek tried to take a ball into the Faith goal but the goalkeeper had a different idea and collided with her just outside the goal. Once again Sydney hit the ground hard. The referee must have thought the fifth collision was the charm and called a penalty on Faith.

This gave the Trojans a free kick. Sladek was still reeling from the collision and said she was in no shape to take the kick so the honor fell to Courtney Lindsay. This was a rematch between her and the Faith goalkeeper. Just last week the Trojans had a similar situation where Lindsay made a similar kick. Lindsay took the immense amount of pressure like a pro.

A normally quiet person, Lindsay’s comment was the most she said the whole season.

Sladek said Courtney made a great shot. “When we go to take penalty shots in that situation, I always sort of look at Courtney, I knew I could rely on her,” she said.

In the first five minutes of a 15-minute overtime, it was a whole new game for the Trojans. Trojans’ Coach Pam Larmouth said her girls were ready to end the game.

“We told them after regular time expired, play your game. Be calm, play our game. We are going to state just play your game. These guys are in such good shape and they were ready to go and could have played another 30 minutes,” she said.

It was up to the two seniors, Kristen Young and Sladek to again probe Faith for weaknesses. Within the first five minutes of overtime Young made a perfect pass to Sladek who came down the side and tried to put it in the goal from a side angle. It didn’t work. This did not deter Young and Sladek from trying again. If you don’t succeed the first time try again and the Trojans came down the middle this time. Young made another perfect pass over the heads of the defenders and this time Sladek came down the middle and got net. The game was over.

Sladek commented on a missed opportunity towards the end of the game and the last shot.

“I was all alone and I thought I just lost the game for us and we were not going to get another chance, and then when we got the penalty kick right here I said, ‘We are in it.’ I would have even been more screwed if I had missed the last one. I felt like everything just stopped for a second. The last shot was no thinking at all,” Sladek said.

The Trojans and Faith will take their show on the road and probably do it all over again on Saturday of this week. The Trojans will play on Friday at 4 p.m. against the number two seed, Truckee at Dayton High School, while the Crusaders will play the number one seed, South Tahoe at 12 p.m. The championship game will be played on Saturday at 11 a.m.