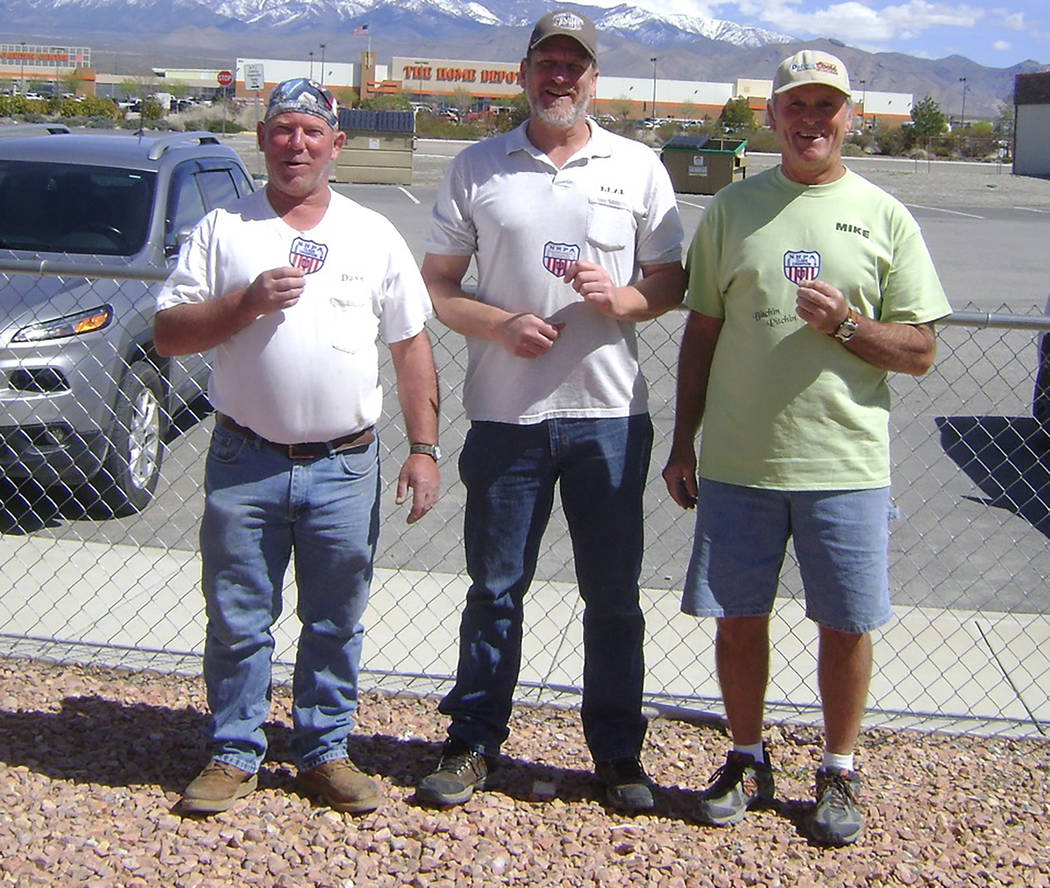 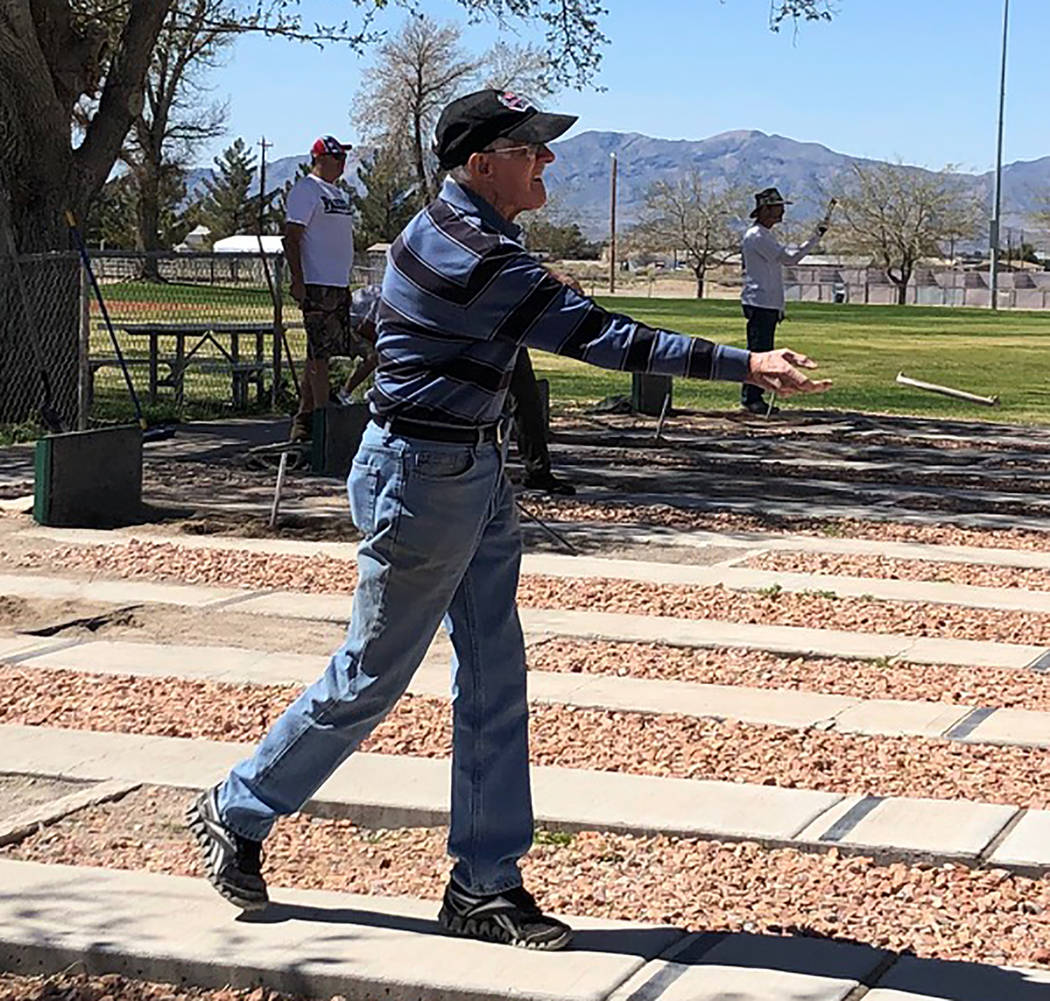 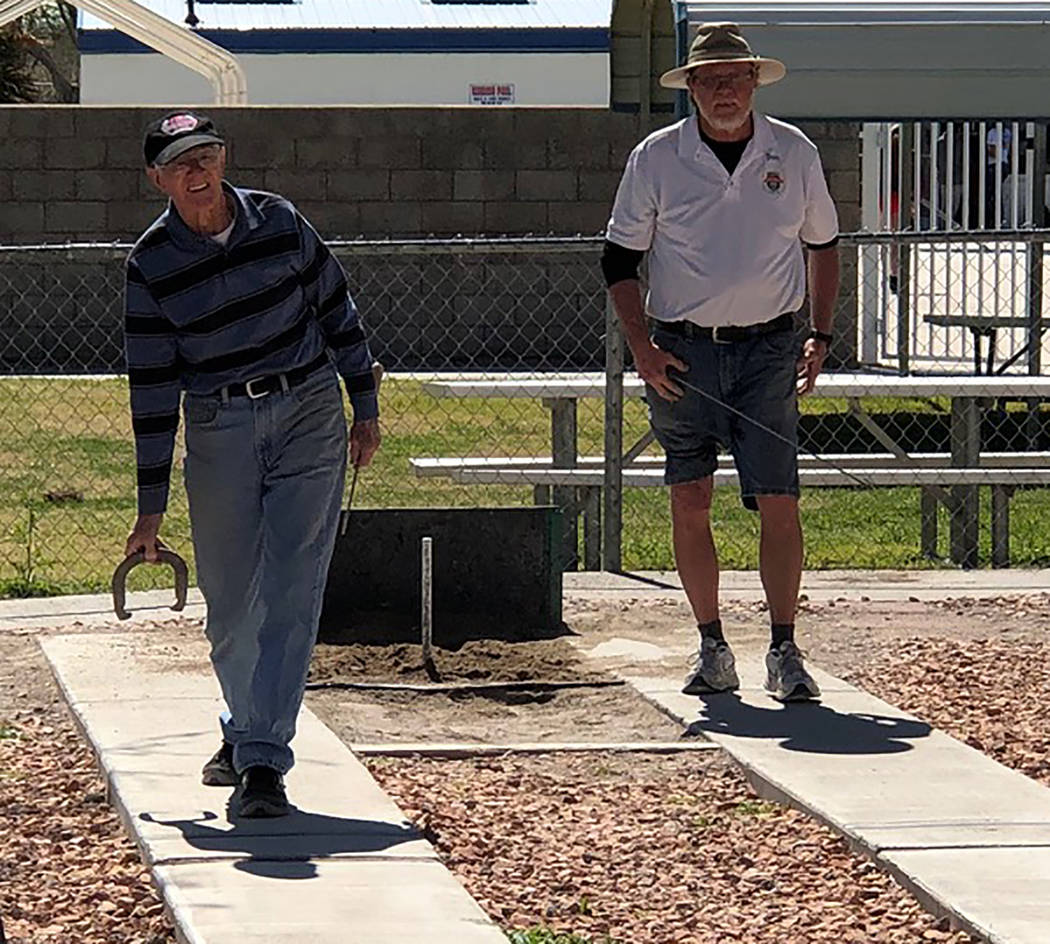 Mike Norton is always looking to see new faces at Nevada Horseshoe Pitchers Association tournaments, even if the new face is an old one.

And while he might not have won the Pahrump Spring Open, 90-year-old Fred Kennedy of Las Vegas was pleased with his performance.

“I won two, tied two and lost one,” Kennedy said Saturday at Petrack Park. “Not bad for the first time.”

Not only did he finish third in the middle group at his first tournament, he only picked up the game seriously four months ago.

“I enjoy the game. It’s a lot of fun,” Kennedy said. “I’ve always liked to play horseshoes at a family picnic or whatever. Gives me something to do.”

Even if it means making the drive over to Pahrump for his first NHPA tournament.

“I came with two guys I play horseshoes with in Las Vegas all the time, Dan (Dunn) and Ray (Leavitt),” Kennedy said. “It’s a good tournament. A lot of nice guys, too.”

The tournament champion was another Las Vegan, Neal Schulte, who went undefeated in Class A.

“I won one last year,” said Schulte, who said he has been pitching with the NHPA since 1992. “Mr. Weaver always said if you pitch your average you’ve got a really good chance of winning the tournament. May he rest in peace.”

The late Don Weaver was a 2007 inductee into the National Horseshoe Pitchers Association Hall of Fame. Schulte’s ringer percentage going into the Pahrump Spring Open was 30.18, and he pitched to a 31.25 on Saturday.

Schulte, a Nebraska native, said he makes two or three of the tournaments held in Pahrump each year. On Saturday, he was one of 16 competitors.

“We’ve had more than 16,” Norton said, surveying the day’s spread that included tri-tip sandwiches. “We should have 18, that would be about right. But it was a good turnout today. If we keep feeding them like this, they won’t stop coming.”

Mark Kaczmarek and Dave Barefield finished tied for first in the Class B, with Barefield winning in a playoff. Mike Nicosia went 4-0 to capture Class C.

Norton said the prize money was $35 for first, $20 for second and $15 for third in each of the three divisions.