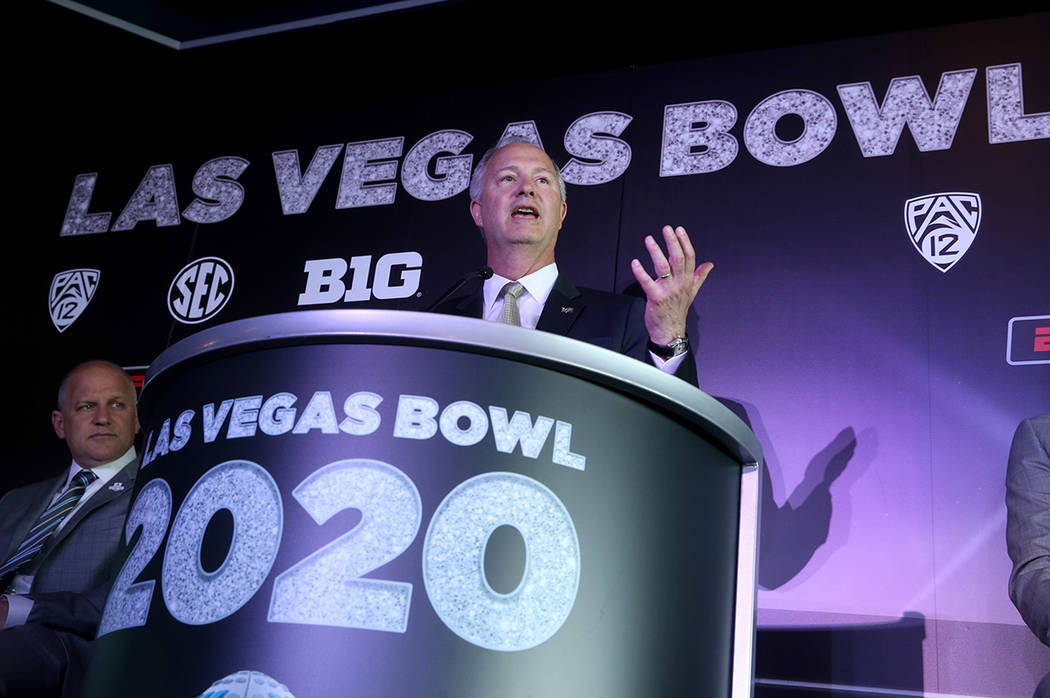 Steve Hill, CEO and president of the Las Vegas Convention and Visitors Authority, right, and Raiders President Marc Badain during announcement for the Mitsubishi Las Vegas Bowl during a news conference in the Apex Social Club at the Palms in Las Vegas Tuesday, June 4, 2019, (K.M. Cannon/Las Vegas Review-Journal) @KMCannonPhoto 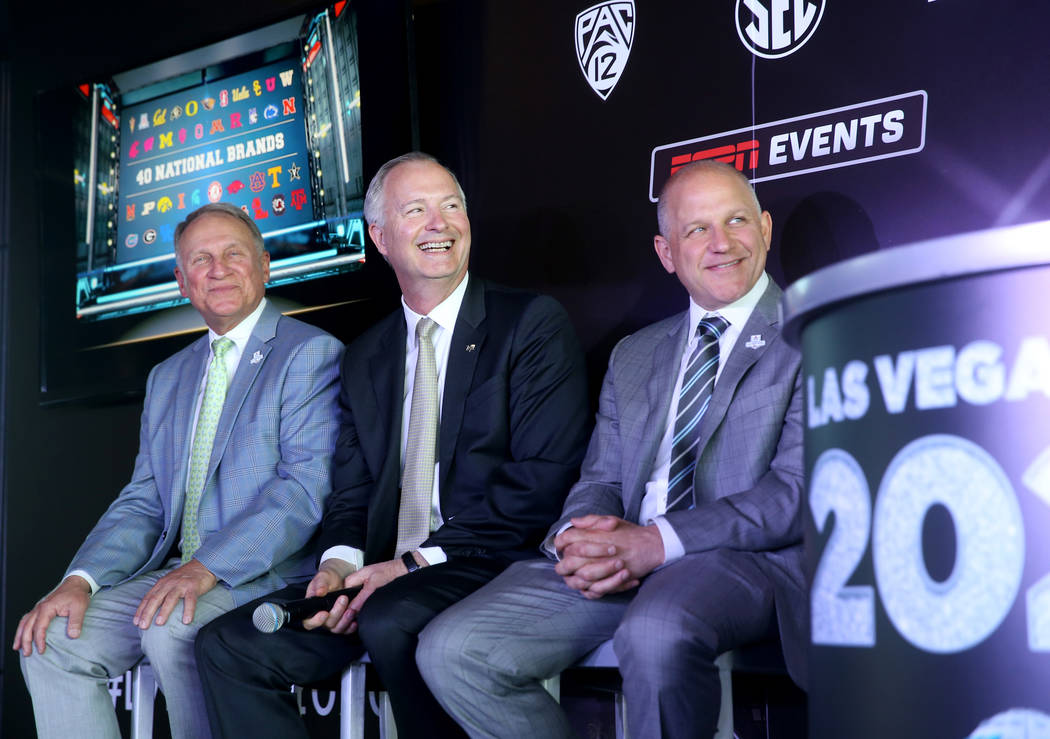 Pete Derzis of ESPN Events, from left, Steve Hill, CEO and president of the Las Vegas Convention and Visitors Authority and Raiders President Marc Badain during announcement for the Mitsubishi Las Vegas Bowl during a news conference in the Apex Social Club at the Palms in Las Vegas Tuesday, June 4, 2019, (K.M. Cannon/Las Vegas Review-Journal) @KMCannonPhoto 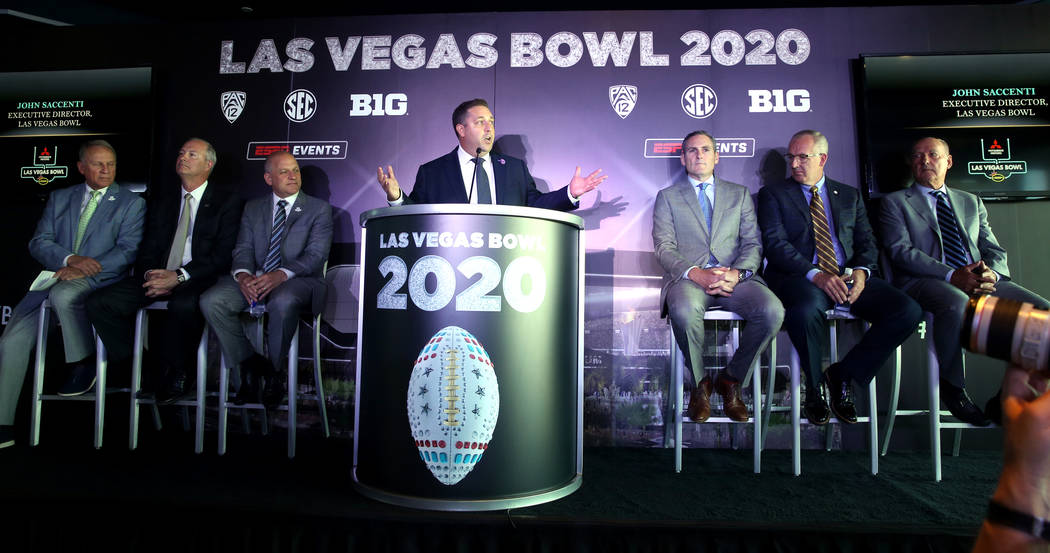 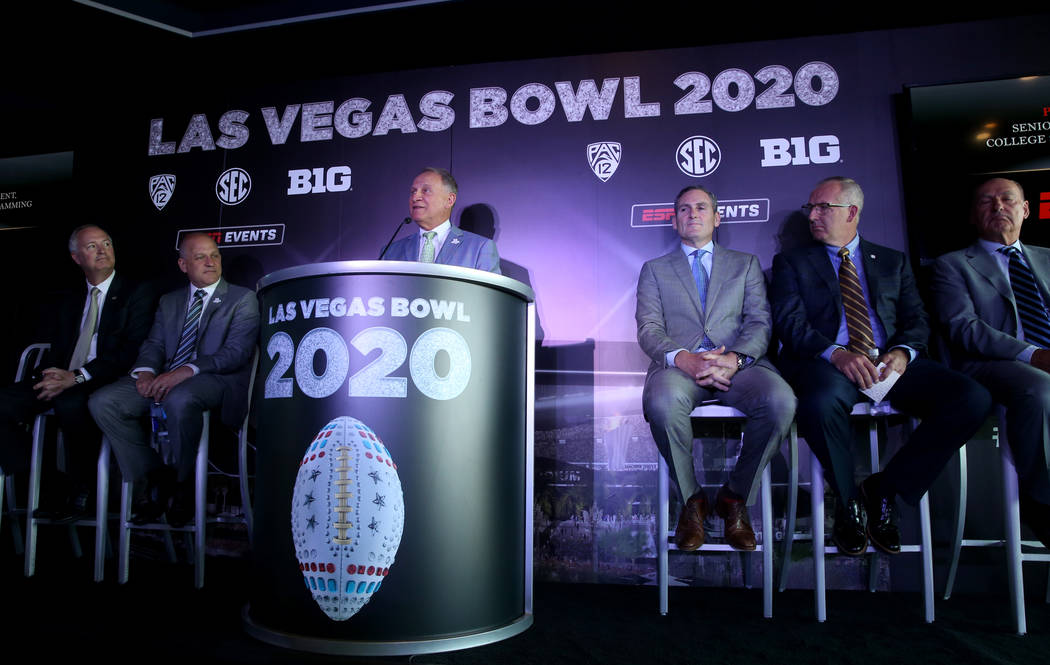 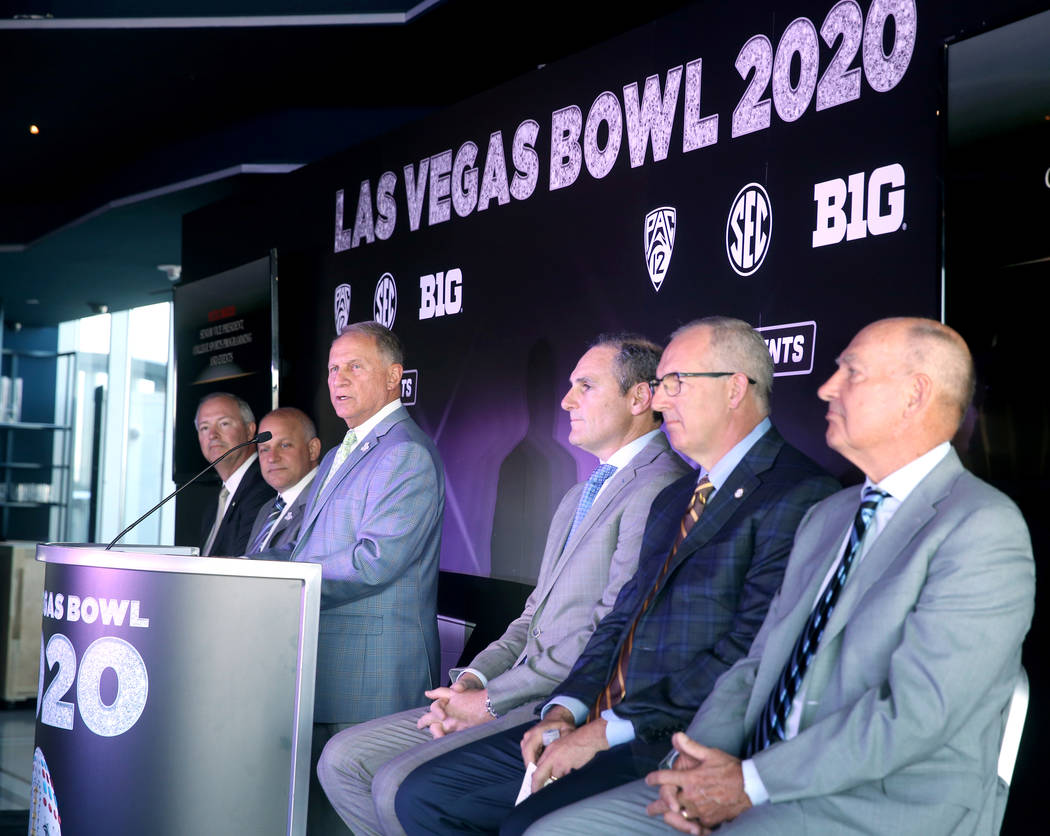 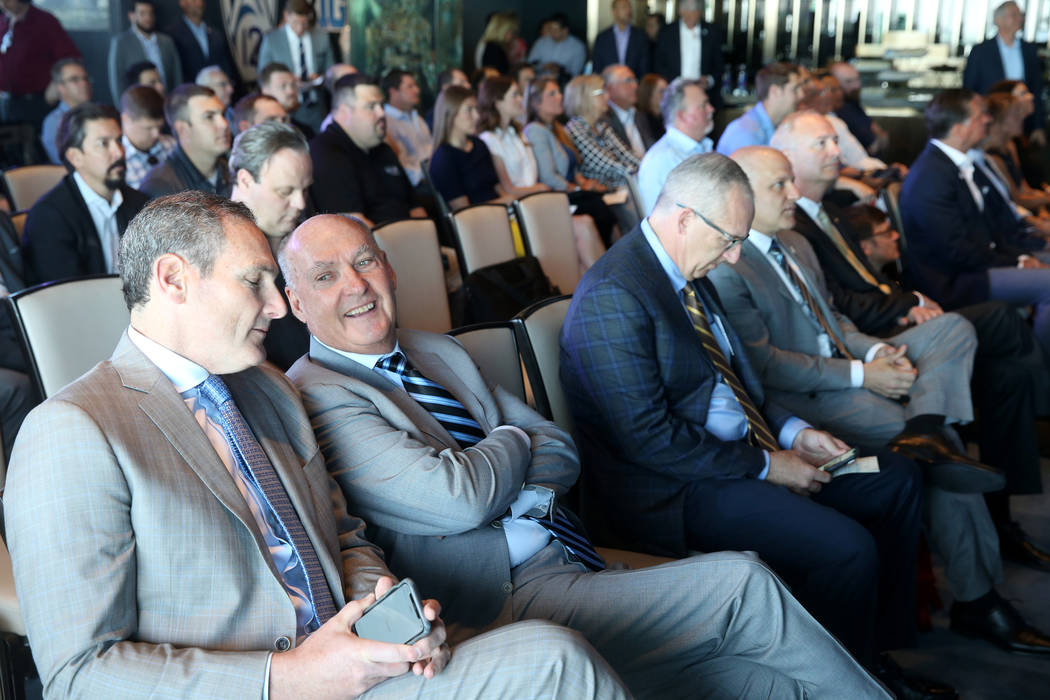 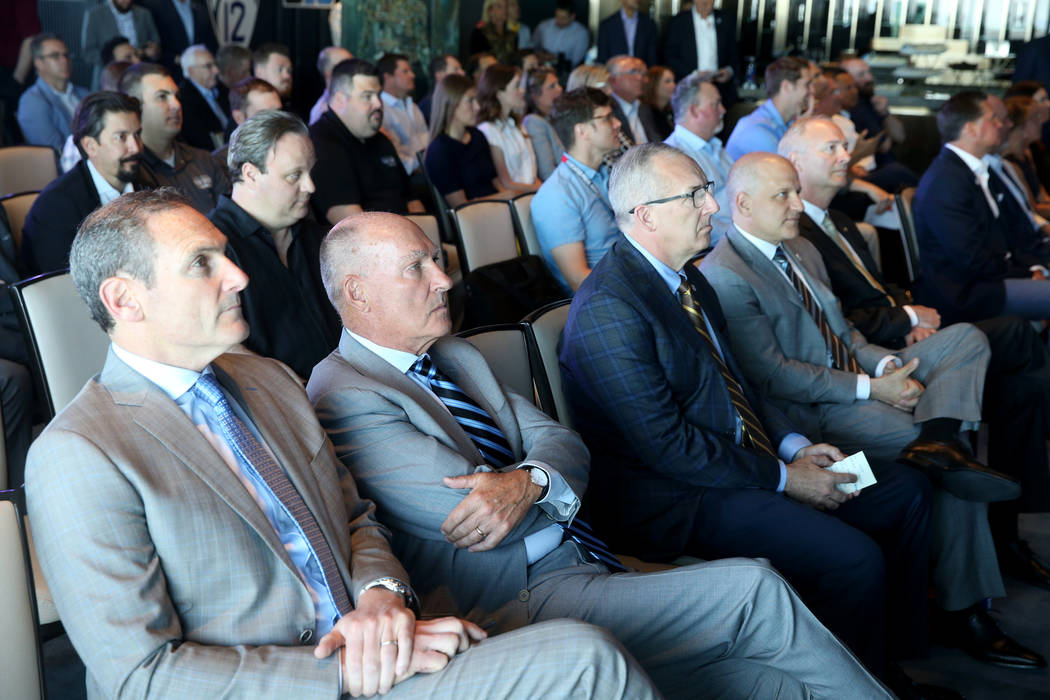 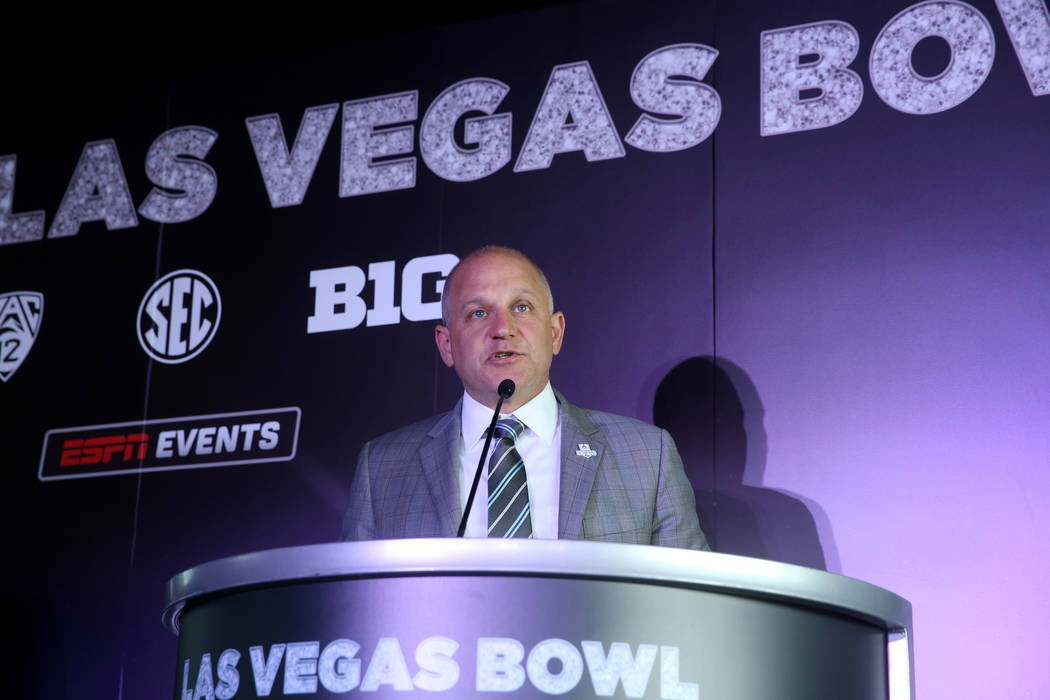 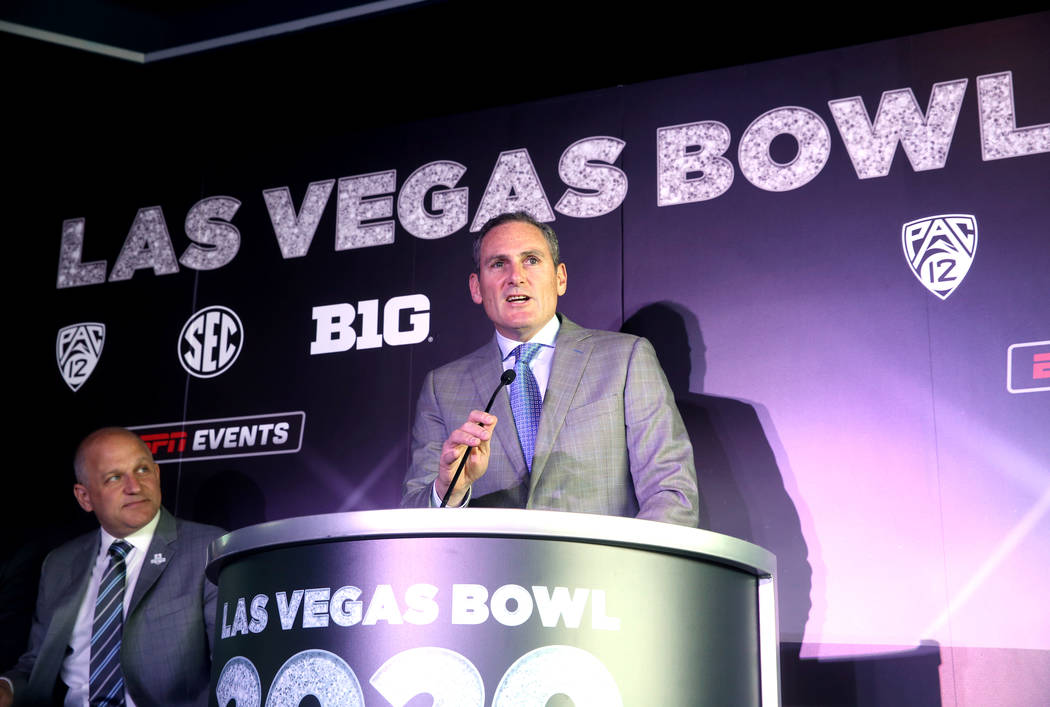 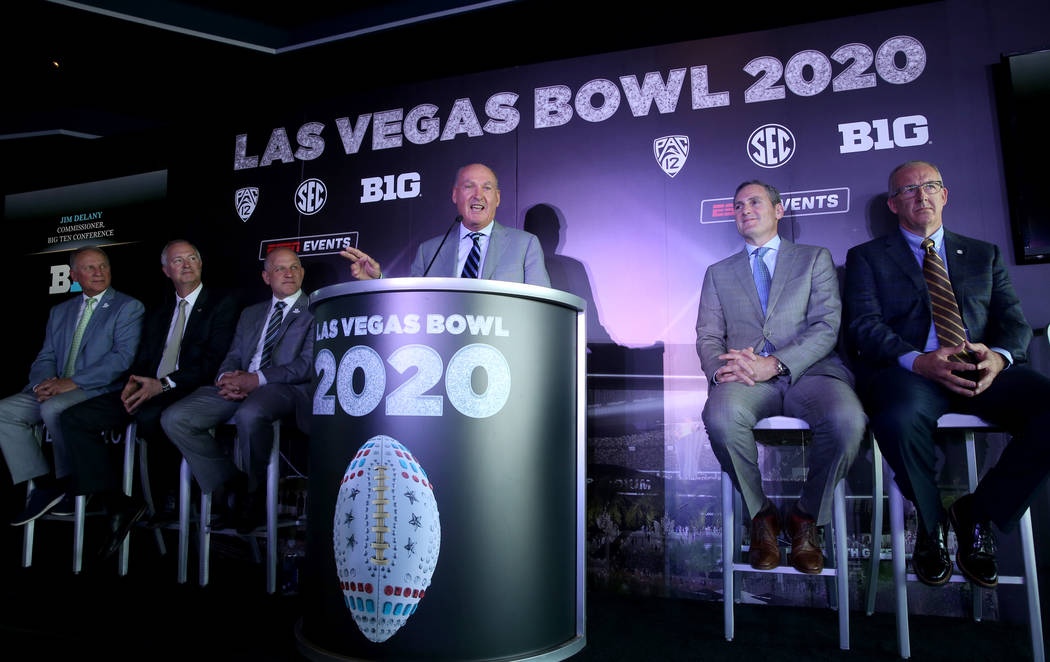 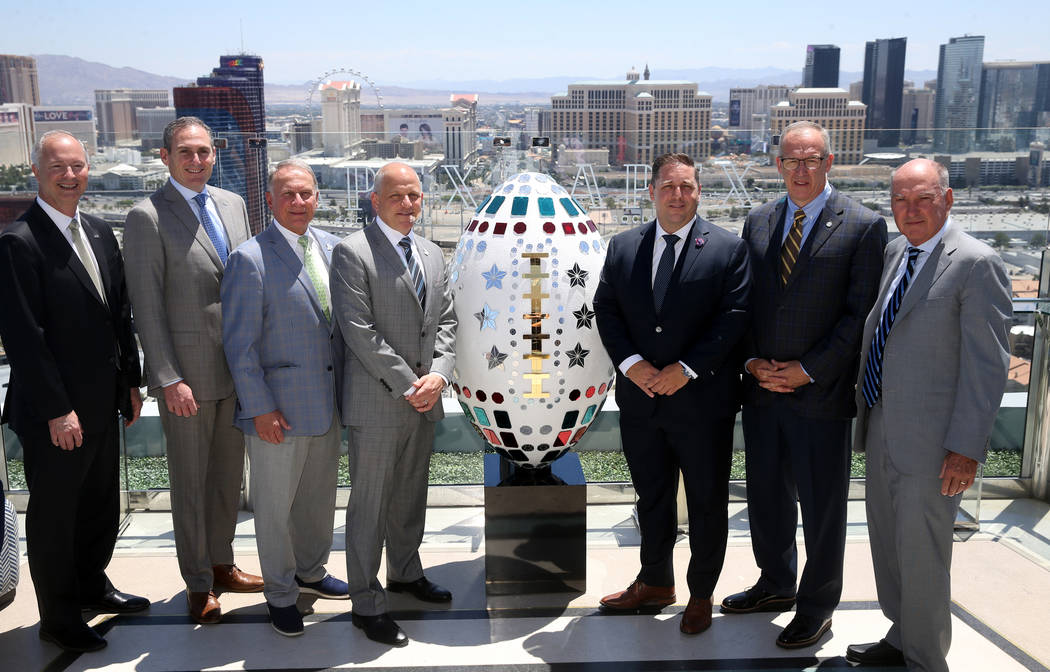 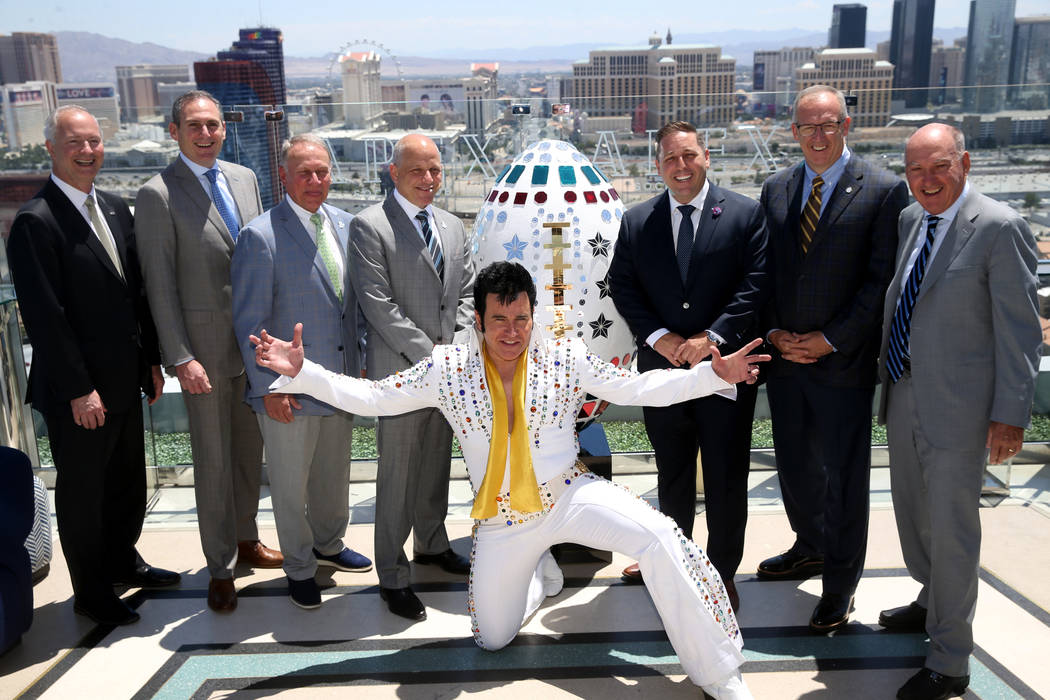 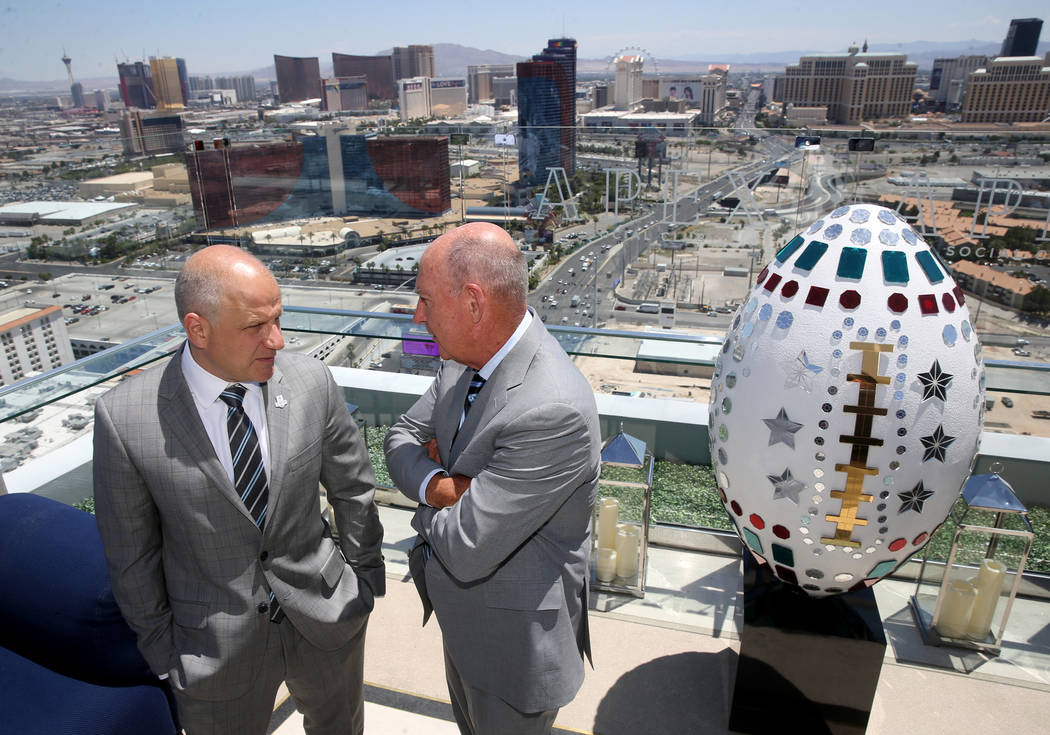 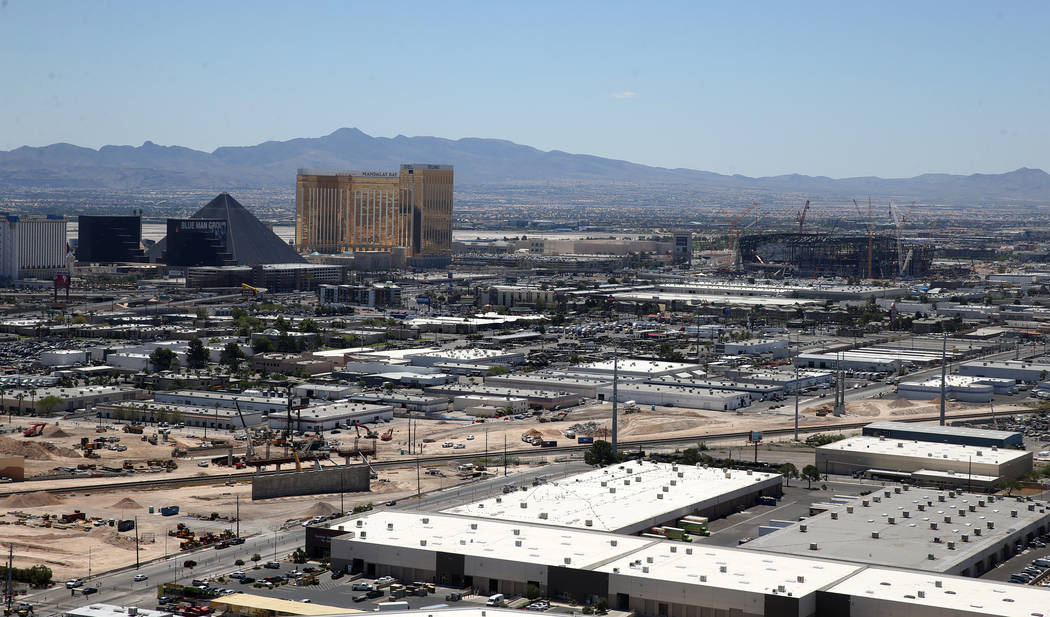 The Raiders Stadium under construction during an announcement for the Mitsubishi Las Vegas Bowl at Apex Social Club at the Palms in Las Vegas Tuesday, June 4, 2019, (K.M. Cannon/Las Vegas Review-Journal) @KMCannonPhoto 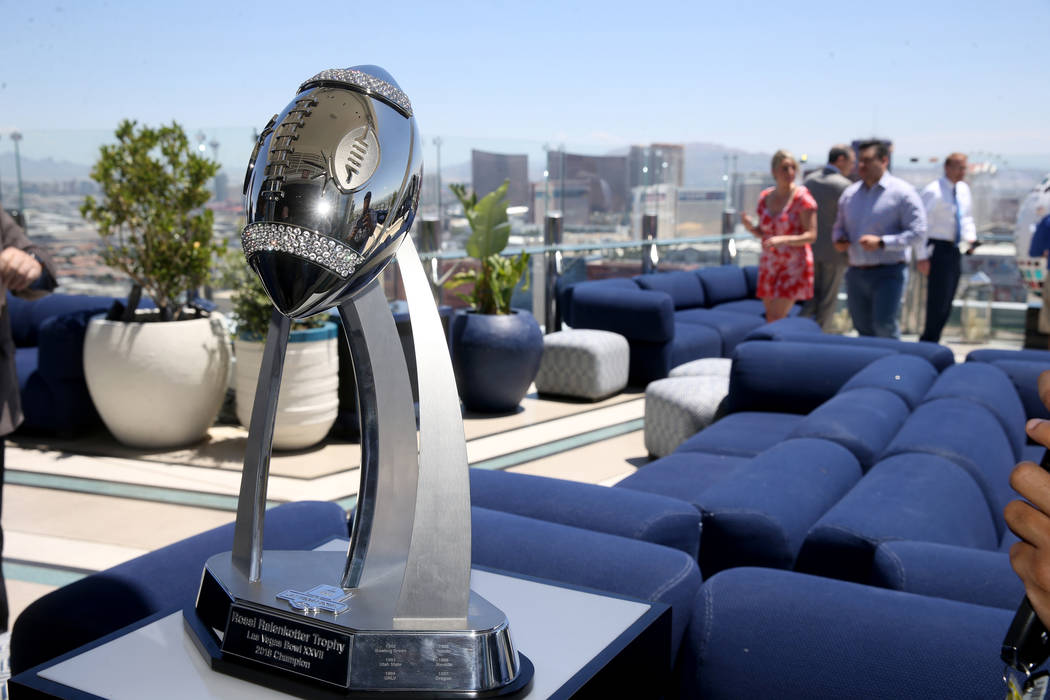 A trophy during an announcement for the Mitsubishi Las Vegas Bowl during a news conference in the Apex Social Club at the Palms in Las Vegas Tuesday, June 4, 2019, (K.M. Cannon/Las Vegas Review-Journal) @KMCannonPhoto 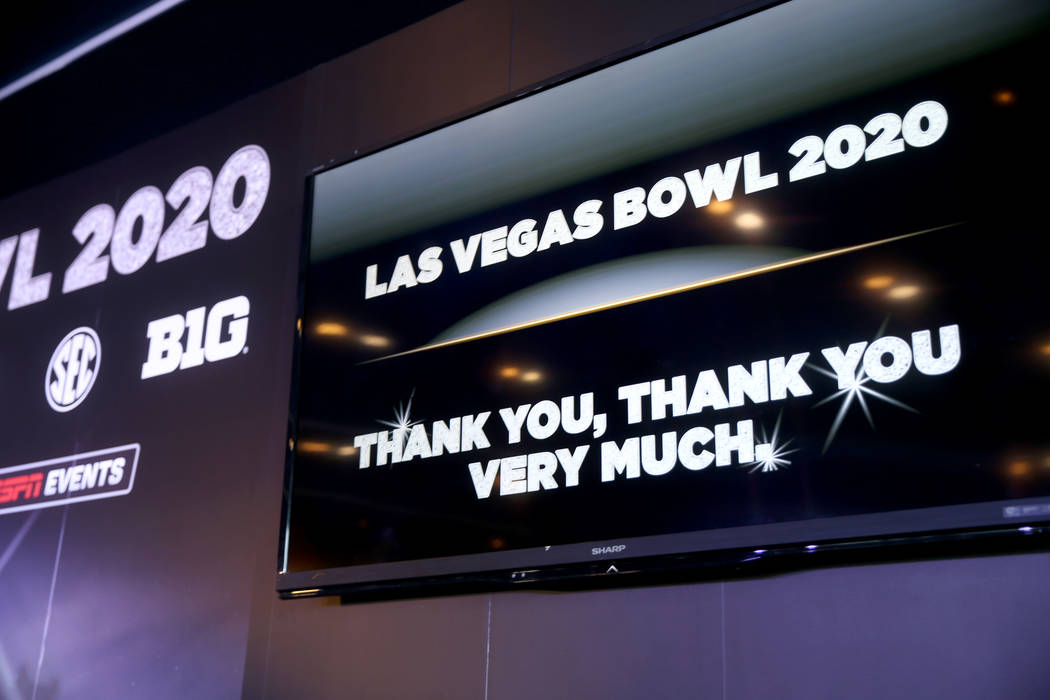 A screen during an announcement for the Mitsubishi Las Vegas Bowl during a news conference in the Apex Social Club at the Palms in Las Vegas Tuesday, June 4, 2019, (K.M. Cannon/Las Vegas Review-Journal) @KMCannonPhoto 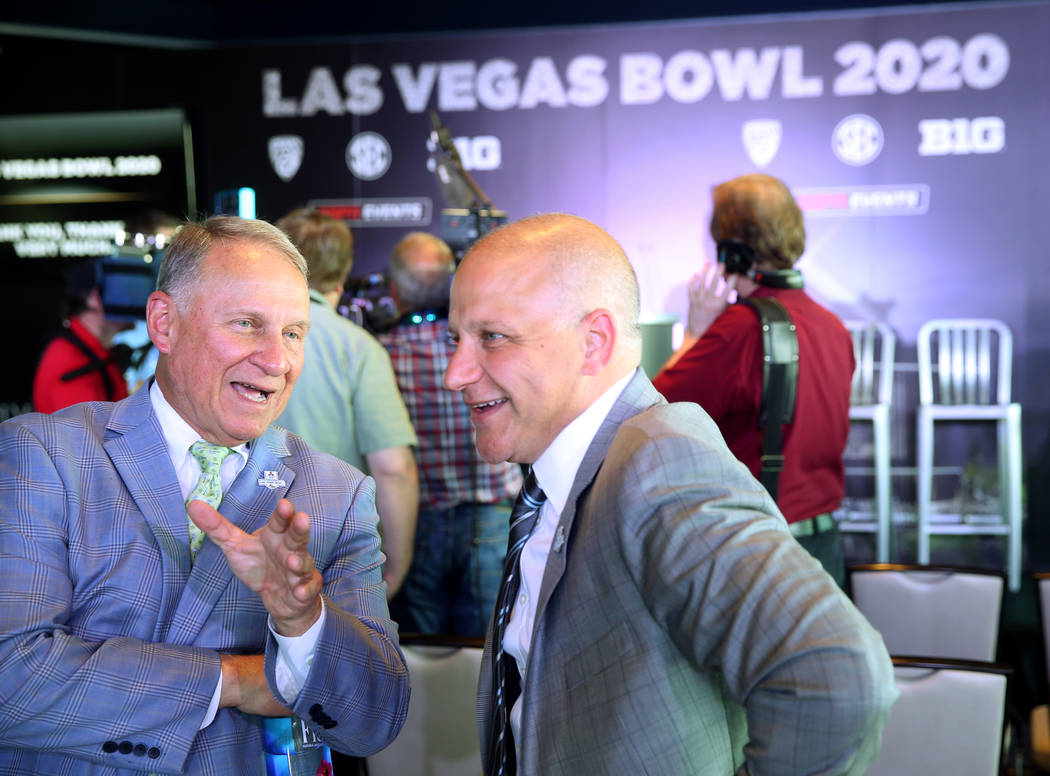 The Las Vegas Bowl is getting later, larger and more lavish.

Officials announced Tuesday that starting in 2020 it is moving from Sam Boyd Stadium to Raiders Stadium and will pit a Pac-12 team against an opponent from either the Southeastern Conference or the Big Ten.

The bowl also will move to a post-Christmas date for the first time, per a six-year deal between the game and the three conferences that runs through 2025.

The agreement means the game will be held in a larger venue, at a more convenient time for traveling fans and feature higher-profile teams than before. Previously, the event featured the sixth selection from the Pac-12 and the champion of the Mountain West Conference and was held on the first day of bowl season.

“We are truly a national bowl game now, as opposed to a regional bowl game,” Las Vegas Bowl executive director John Saccenti said. “We had Mountain West and Pac-12 so once we got to right around Colorado, we were done. But now we’re touching the Southeastern Conference and all the teams within the Southeastern Conference. We’re touching the Big Ten and all the teams in the Midwest and in the Big Ten Conference. So it’s truly a national game.”

The agreement calls for the Las Vegas Bowl to share the second selection out of the Pac-12 with the Holiday Bowl. In even years (2020, 2022, 2024) that team will face a SEC opponent chosen after the College Football Playoff and Citrus Bowl make their selections. The Las Vegas Bowl will split a spot in the SEC lineup with the Belk Bowl and belong to the “pool of six” that shares priority with the Outback, Gator, Music City, Liberty and Texas Bowl.

“This is something our fans have been craving,” Pac-12 commissioner Larry Scott said.

In odd years (2021, 2023, 2025), Las Vegas will host a Big Ten team chosen after the College Football Playoff, Citrus and Outback Bowl selections. It will share a spot in the conference’s lineup with the Music City Bowl. The Las Vegas Bowl has never featured a Big Ten team.

Brett McMurphy of Stadium has reported that the Mountain West champion will play in a new game in the new Los Angeles stadium at Hollywood Park being built for the NFL’s Rams and Chargers. The game basically will be the old Las Vegas Bowl, as it will feature the top team from the Mountain West against a Pac-12 team.

Growing beyond the Mountain West into an agreement featuring three Power 5 conferences should be a boon to the Las Vegas Bowl’s profile, however. The shift from a 36,800-seat stadium to one expected to hold 65,000 will boost revenue, and Las Vegas Convention and Visitors Authority president and CEO Steve Hill estimated the new format will double the event’s economic impact to almost $50 million.

“We’re very confident in that,” Hill said. “We’ll come together as a city to make this a great event. It’s not hard when you have these conferences and the teams that’ll be coming.”