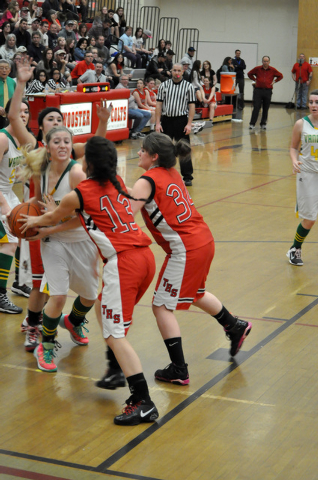 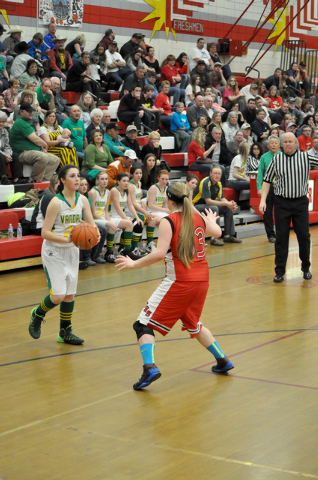 The Lady Muckers basketball team showed people on Saturday that they belonged in the state tournament. They fell fighting hard against the tough Eureka Vandals (30-59) in the semifinal round of Division IV last Friday at Wooster High School in Reno.

The one thing Muckers Coach Russell Olin demanded of his players was to play hard “for yourself, for the crowd and for Harvey Gonzalez” and they did it the whole game. The team has rallied around Gonzalez who coached many of them in volleyball and has stage four colon cancer.

“The Vandals are a great rebounding team and also relentless on defense. Even when we got rebounds, they had girls in double and triple teaming the rebounder. They were out-jumping us on rebounds, and getting a lot of second shots,” explained Olin.

The Muckers’ defense did a good job in the 1st quarter (7-10), but Olin’s game plan did not work as expected in the 2nd quarter, which ended up with Eureka expanding their lead to 23-8.

“We did a better job of beating Eureka’s press, but still committed a lot of turnovers, and missed easy shots and free throws,” Olin said.

At halftime, the Vandals had a 34-15 cushion. Despite the unfavorable result, the girls never gave up.

“They showed a lot of leadership all week,” the coach said.

Senior Ashley Gray, who “again had a double-double” was the leading scorer with 10 points and grabbed 11 rebounds.

Senior Cheyenne Torres recognized that there were strong feelings on the court that day.

“I felt sad and a little nervous, but all I knew is that we were all going to go out and play our best,” she explained. Unfortunately, their opponent did not give in. Natalie Norcutt for the Vandals had 15 points, 11 of them scored in the first half and Taylor Usry had 14 points and led the Vandals to the win.

“Even though we lost, they should be proud of themselves. One of the team goals was to keep improving as the season went on, and they believed they did. I told them like life, sports has a lot of ups and downs, but because they play sports, the experience will help them in the rough times, and if they ever need help I will be there for them,” Coach Olin told the girls after the game against Eureka.

He also had some nice words for his seniors, who he has known for the most of their lives.

“I told Ashley, Julia, Cheyenne, Bria, and Sydney that I will miss them, and I thanked them for playing basketball,” he said.

This was the third time Olin was in the Nevada State Tournament as a coach. He took Gabbs boys in 1992 and the Tonopah girls in 1999. This time was as special as the previous ones. According to Olin, the best part of the tournament was “the excitement you see in the girls’ eyes, and the support of the town in sending us off.”

The whole team showed gratitude for all the support the town provided during the whole season.

“Thanks for supporting us in everything we do. Thank you for traveling countless miles to support us. Thank you for always being our number one fans,” Gray said.

“Tonopah is such an amazing town,” Cheyenne Torres said.

“At the beginning of the season, I talked about how sports can build relationships, and it was shown this year by other communities. The towns of Round Mountain, Eureka, Alamo, and Beatty all did things in honor of Harvey Gonzalez,” Olin said gratefully. “This is by far the most important lesson that we all have learned this season.”