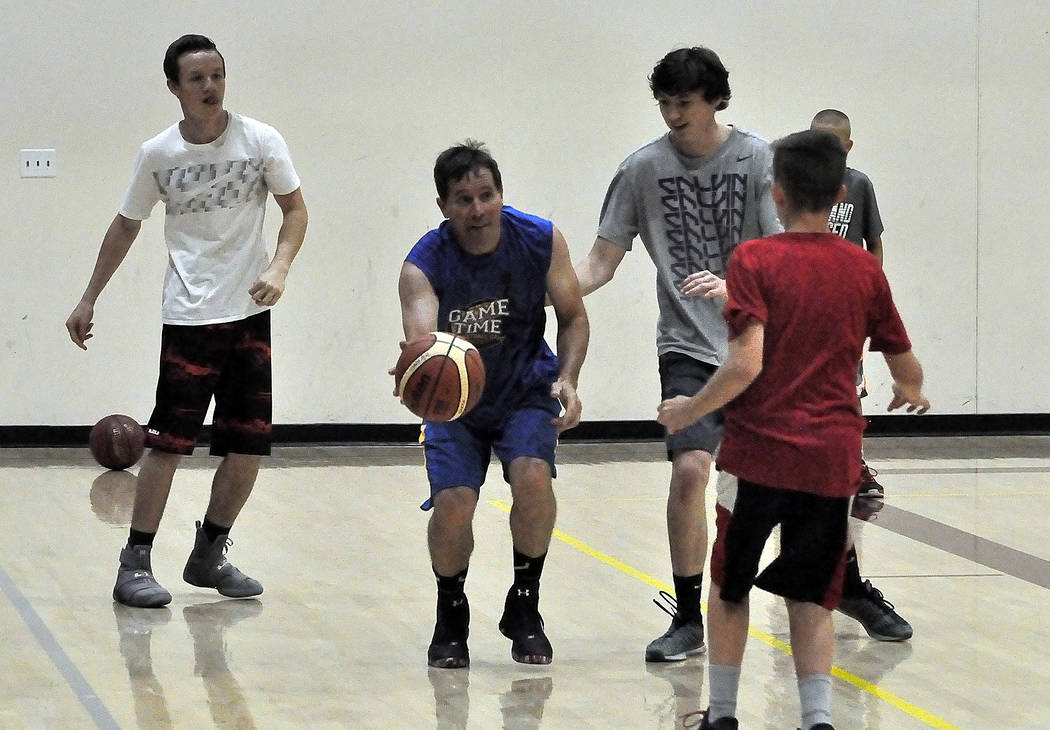 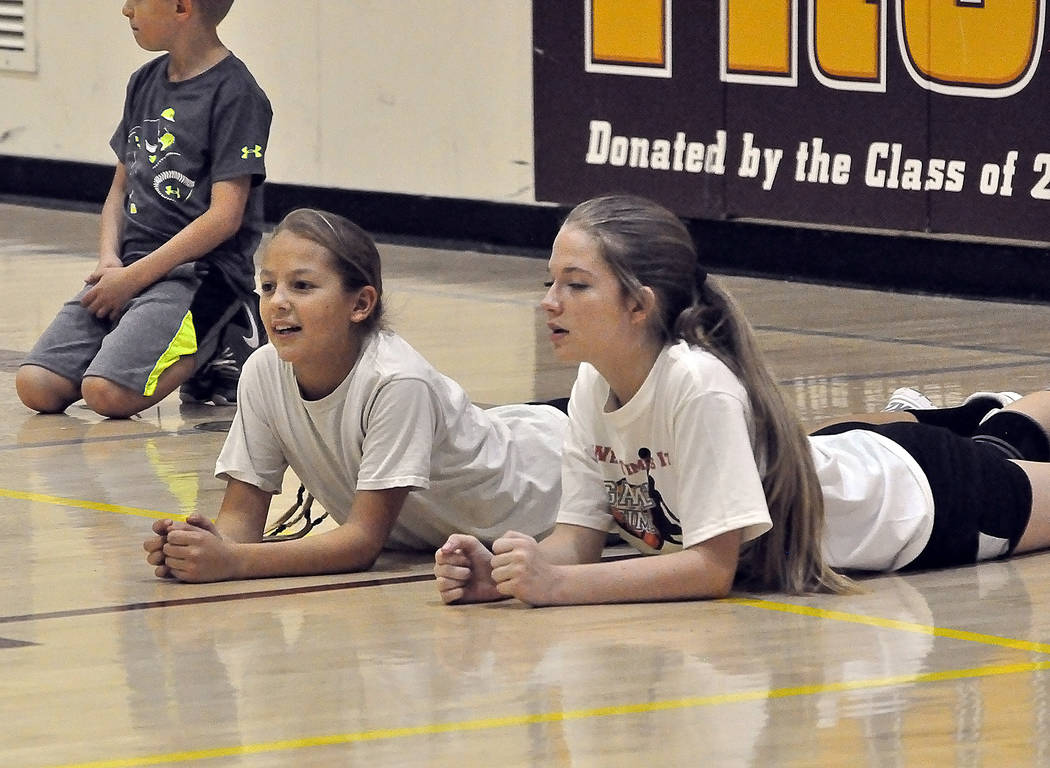 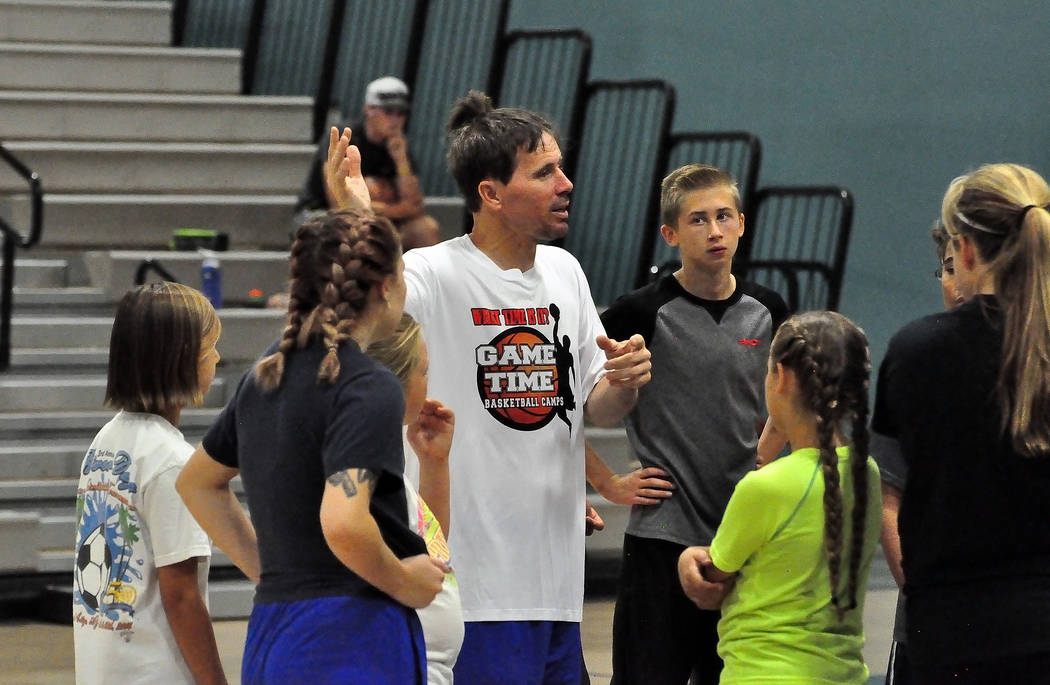 Horace Langford Jr./Pahrump Valley Times Gil Llewellyn talks with some of the aspiring players at his Game Time Basketball Camp in June 2016 at Rosemary Clarke Middle School in Pahrump.

il Llewellyn has played with, collaborated with, coached with, consulted with and otherwise worked with a who’s-who of American basketball.

Despite not being involved in basketball between his days as a high school benchwarmer in Los Angeles until he was 34, Llewellyn’s passion for the game, hard work and boundless energy have led him to develop connections at all levels of the sport.

He will bring that passion and love for the game and what it can teach people to Pahrump when his Game Time Basketball Camp returns June 28-30.

“After being out of basketball for about 16 years, I decided to make a midlife change and pursue what I was passionate about,” Llewellyn said. “I wanted to in some way impact people through basketball.”

Llewellyn carries a long list of credentials to the business of sports camps.

home and abroad. He has captained 3-on-3 teams that have won championships in high-profile tournaments. He has worked with USA Basketball and was the lead trainer for one of the most popular basketball camps in the world for eight years. Pictures of Llewellyn with players such as Thurl Bailey, Tamika Catchings, Michael Cooper and Mitch Richmond dot his personal profile.

“Sometimes you discover something that is connected to a passion that is not quite the way you thought things might go,” Llewellyn said. “It glanced off from my own training. About six years ago, I started my own company because I thought it would be a better way to have the freedom to do the things I felt should be done.”

A major part of that is personal development. Llewellyn, like one of his major influences, former UCLA coach John Wooden, believes basketball lessons translate into many other areas of life.

The game has allowed Llewellyn to reach a variety of people, including some in serious situations.

“Everyone is at a different level, but you treat individuals as individuals,” he said. “You show them the love. My greatest joys have had nothing to do with the basketball side of things.

“I can’t tell you how many times I’ve come across situations where I’ve had young kids in my camp where their father died the week before, or kids with parents going through divorce. They don’t have to say anything, I can see it. I had a little kid who was a terror, very antagonistic, at a camp in Northern California. I found out his grandparents were bringing him because both of his parents were drug addicts and didn’t want to live with him. I brought him to me, told him I loved him and wanted him to be my assistant, and we had a massive change.”

A few of his campers have been adopted children from other countries, even some victims of sex trafficking, Llewellyn said, and he takes enormous satisfaction in reaching them through basketball.

“Basketball absolutely has saved my life at different periods of time,” he said. “I know I have a gift for teaching people through basketball.”

Despite the life lessons and personal development that come from working with Llewellyn, fun remains vital to the success of the camps.

“We obviously mix in fun, because if you’re not having fun you’ve got to change it up,” he said. “There is a schedule, but I also play a lot off the energy of the camp.”

Llewellyn’s first camp in Pahrump was sparsely attended, but the second time around several dozens young players took part. That did not come from sophisticated marketing techniques.

“I’m a little bit behind the times,” he said. “I’m not utilizing Twitter much. I don’t have a Facebook page. But I do have exceptional word of mouth. I do want to reach more people, and I am going to be doing more with digital products.”

Knowing there is always more to learn is one of Llewellyn’s themes.

“I know a lot, but I also know what I don’t know,” he said. “I think I’m really just getting started at 48. I plan to keep doing it as long as I can. … In terms of the camps, I love doing them, from the process of planning and conception, to working out how it can happen, to promoting it. I would like to keep Pahrump there for many years.”