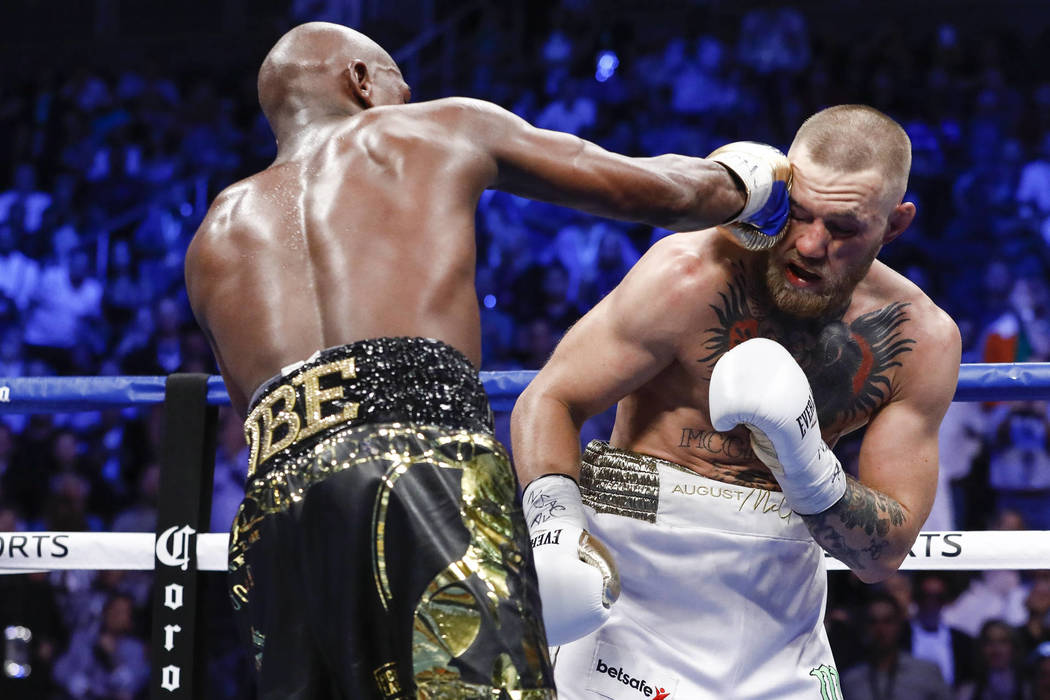 Esther Lin/SHOWTIME file Floyd Mayweather landing a punch on McGregor during the Aug. 26 fight. Mayweather wore McGregor down and was able to win it in the 10th round..

Gonzalez was one of the many who purchased the fight through pay-per-view and had some friends over for a fight party.

“This was easily one of the most hyped fights in combat sports this year,” he said. “Both fighters trained at their respective camps and gave the crowd a show, as promised.”

This was more for show than a fight

Gonzalez emphasized the show aspect of the event.

“Bringing in nine-digit figures for both fighters win or lose without anything truly on the line made it a fight where there was none of the anticipation one has when watching Mayweather or McGregor compete in their respective fields,” he said.

“Was it a fun fight?” he asked. “Absolutely, personally I found it extremely entertaining and fun to watch, especially being the only one at my event giving the win to Mayweather outright. I did not choose any sides, but logically, Mayweather was going to win. Did McGregor put up a good fight? For someone who has barely been in the boxing world (this is a comparison made against true boxers) he did fairly well.”

Was McGregor any good?

How well did McGregor do? Besides taking home 30 million, Gonzalez said he looked good at the beginning of the fight.

Gonzalez said he even gave McGregor the first three rounds.

“He came in strong and it looked as if he was giving Mayweather a run for his money, but Mayweather was simply reading his movements and getting used to McGregor’s rhythm,” Gonzalez said.

“There were some hard hits from McGregor but Mayweather’s defense was tight. One important factor to note during the first rounds that a lot of people overlooked was the subtle body shots delivered by Mayweather. McGregor was throwing heavy hits at Mayweather’s head and gloves, which gave Mayweather opportunities to slip in those clean body shots.”

Why did Mayweather win?

Gonzalez explained that the body shots add up and take their toll and “have a devastating effect on stamina as a match progresses.”

Gonzalez said things started to change in Mayweather’s favor as early as the fourth and fifth rounds.

“McGregor still had significant power behind his punches and was still pressuring Mayweather; however at this time, Mayweather was in his groove and in his element. Picking up on McGregor’s rhythm, he was able to steadily progress forward and put the pressure in return while keeping his defenses tight.”

This was when Mayweather started wearing down McGregor.

“It was ultimately the strategy that worked,” he said. “Mayweather knew that time and stamina was on his side for this fight, which was made evident in the final rounds.”

“Sloppy and wild hits were being thrown at this point by McGregor, and those kind of hits waste energy,” Gonzalez said. “McGregor’s guard was non-existent due to his hands being far below his chest line and allowing Mayweather to do whatever it is he wanted to his upper half. This was especially evident in the eighth, ninth and 10th rounds where Mayweather was still absolutely composed compared to McGregor’s mismatched rhythm and breathing.”

Gonzalez said he can see that Mayweather was very sharp through his eyes.

“One way to tell whether or not a fighter is feeling a punch is to see how quickly their eyes snap back to focus on the opponent in front of them,” he said. “Early in the beginning rounds, McGregor delivered a clean uppercut to Mayweather that landed solid. After that hit, you can see Mayweather’s focus snap back almost immediately to his opponent.”

McGregor started to lose focus and that was in his eyes too, according to Gonzalez.

Should the ref have stopped the fight?

Overall, Gonzalez feels the fight was an entertaining one.

Was it a competitive match and is McGregor a boxer?

“No, on both accounts,” Gonzalez said. “The upcoming GGG vs Canelo Alvarez will show what a boxing match should look like. It will also show what kind of fight another boxer should take, this was something that Mayweather pushed to the side as he had dollar signs in his eyes. McGregor has kudos for taking up the gloves and going into the ring but he gets a 5/10 for skill level in the pro circuit because boxing is much more than landing some hits.”