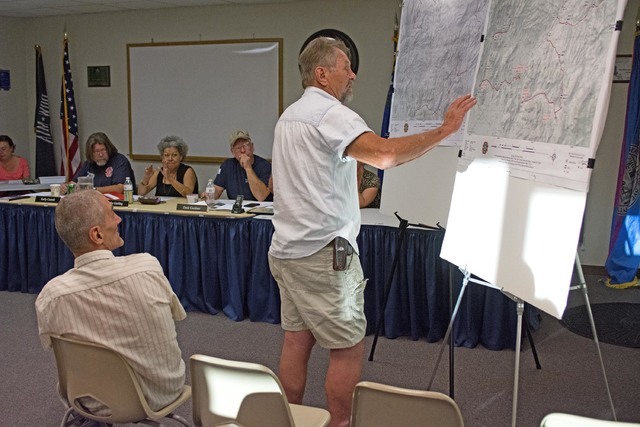 Karl Olson discussing off-road trail routes with the Beatty Town Advisory Board on Monday. Olson finds the geology and the history in the desert around Beatty fascinating and beautiful, and believes it could become a tourist attraction. Richard Stephens/Special to the Pahrump Valley Times

BEATTY — The mountain bike trails developed by David Spicer may well not be the only thing to bring off-road tourists to Beatty if Karl Olson’s dream can come true.

Olson has worked developing off-road routes for the Beatty VFW post’s annual poker run, which began in 2014, but he sees them as much more than that.

Olson finds the geology and the history in the desert around Beatty fascinating and beautiful.

“People don’t realize the treasure we have here,” Olson said at the Beatty Town Advisory Board Aug. 8 meeting.

He has mapped out a hundred miles of Jeep and ATV trails, mostly on old county dirt roads on Bureau of Land Management land, identifying points of interest, many of them connected to the history of mining and transportation in the area.

Maps and guide books on the routes have been shared with the Beatty Chamber of Commerce and the Beatty Museum.

Olson said he met with representatives of an organization called Back Country Trails that is developing a system of off-road trails from one end of the state to the other.

“It is going to be sort of like hiking the Appalachian Trail,” said Olson. The organization will identify and publish trails in rural communities, and people who complete them will earn buttons.

Olson’s purpose in approaching the town board was to seek the town’s support for the project, not in money but in approaching the county and the BLM to get permission and seek the means to put signage on the trails that would help visitors navigate them and identify points of interest.

Ann Marchand said she had seen such signage in Utah and in northern Nevada. She said it could help keep people from getting lost and could be an aid to emergency services.

The board was very receptive to the idea and agreed to approach the county with their support.

There were no other action items on the board’s agenda, but they did give time to Marty Campbell, who presented certificates of participation for people and companies who have provided support for the Beatty Senior Center. These were given to U.S. Ecology, Corvus Gold, the Beatty Town Advisory Board, the VFW post, K.C.’s Outpost, George Radomski (Beatty Mercantile), JT3, and town secretary Carrie Radomski.

Campbell reported that the Beatty Senior Project Council had “pretty much finalized” its bylaws in preparation for applying for 5013c status. He also said that the Senior Center’s bingo night had been going very well, raising $75-$80 per week, “which is very helpful.”

Earlier in the day, Campbell and some town board members participated in a meeting with officials from various levels of government seeking answers to the bleak financial plight of rural senior centers throughout the state.

Richard Stephens lives in Beatty and has been writing for the newspaper for more than 20 years.