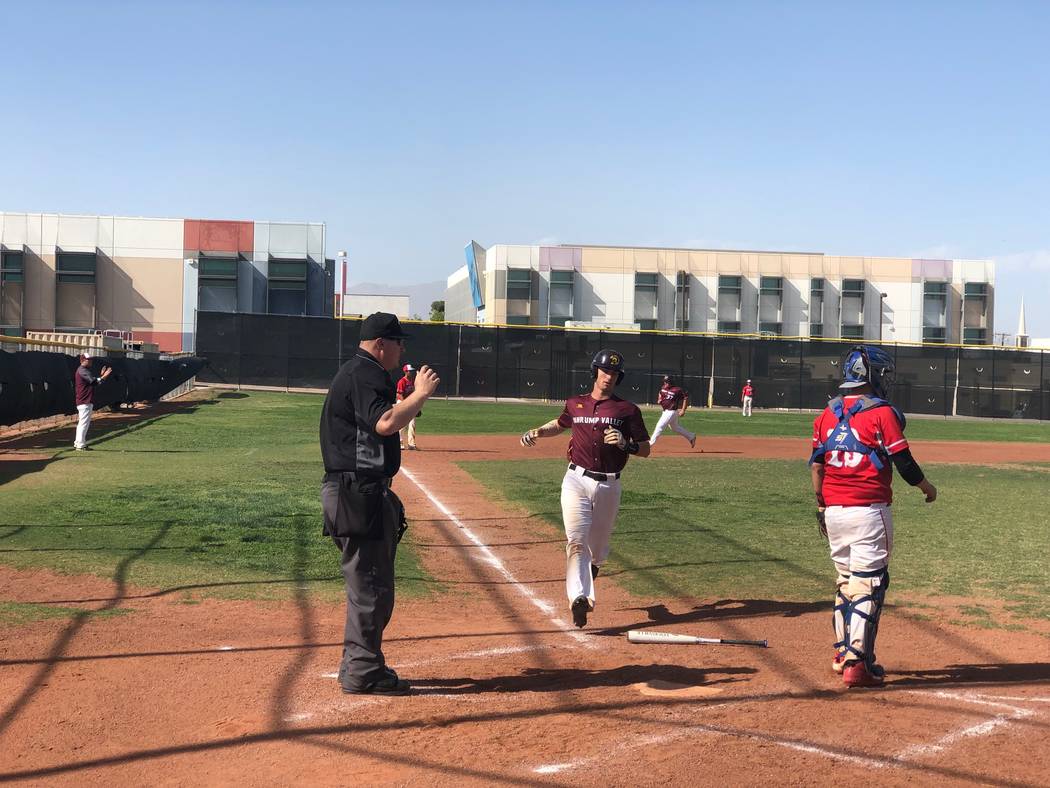 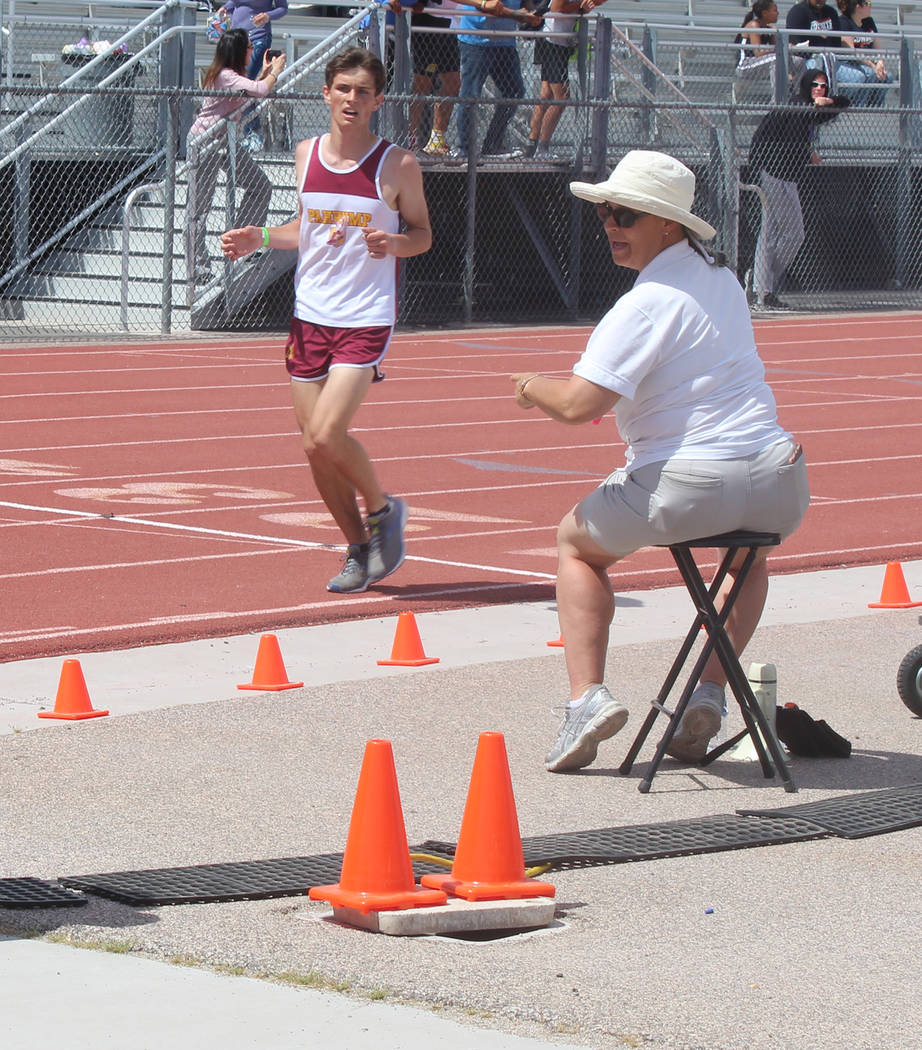 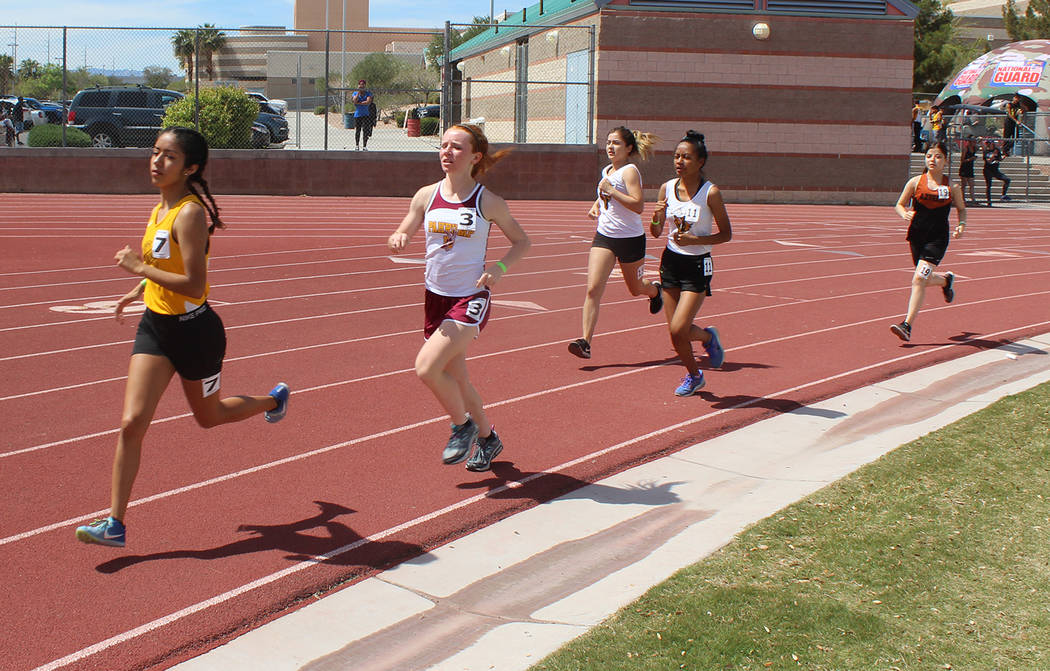 Tom Rysinski/Pahrump Valley Times Sophomore Makayla Gent, second from left, gets off to a strong start for Pahrump Valley in the 3,200-meter race Saturday at Del Sol Academy in Las Vegas. Gent finished fourth in the race in 13 minutes, 26.66 seconds. 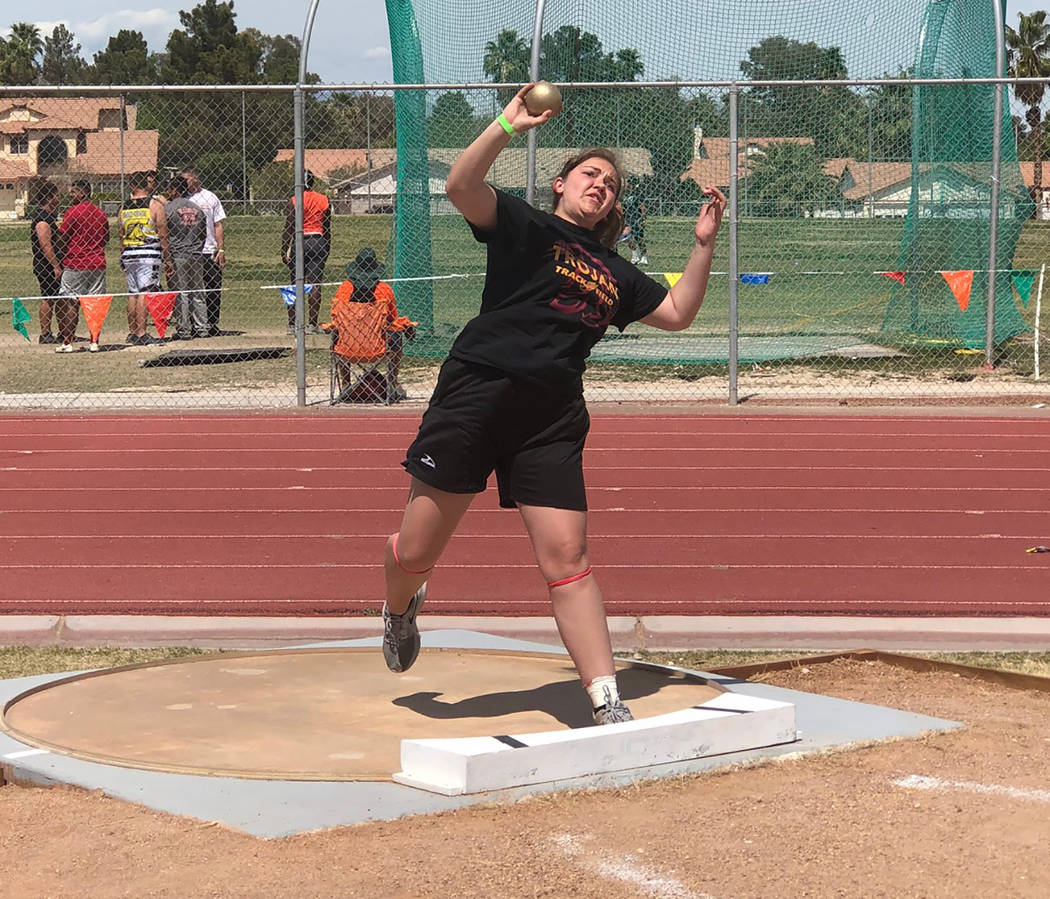 Roughly halfway through the season, Pahrump Valley High School baseball coach Brian Hayes has plenty of reasons to be pleased with his team.

It’s not so much the record — 11-6 overall, 4-1 in the Sunset League — as much as it is seeing some players step up on the one hand and winning games while other players have not yet hit their stride on the other.

“As of now, I would say the two biggest bright spots have been our middle infield, shortstop Chase McDaniel and second baseman Joey Koenig. In addition to playing solid defense up the middle, they have accounted for 42 of our 137 runs.

“McDaniel also leads the team in RBIs with 17 and is one of those kids who just plays the game the right way. He is always looking for the next play, even if he makes a mistake. Joey has been our leadoff hitter for most of the season, but we have been toying with getting him in the middle of the order to drive in runs for us.”

Senior transfer Reace Millette has been an outstanding addition. Millette leads the team with a .577 batting average and is fourth in hits despite playing only 10 games. Hayes added that Millette can do a lot of damage on the bases and is versatile defensively, playing second, short, third and all three outfield spots for the Trojans.

“Another bright spot for us is sophomore outfielder Jalen Denton,” Hayes said. Denton is second on the team with a .526 batting average and “can do a little bit of everything — hit, run, throw and defend,” the coach added.

The biggest hole the Trojans had to fill this season, innings from their pitching staff, largely has been filled by junior Cyle Havel. The closer-turned-starter has four of the 11 victories and is pitching to a 1.33 ERA in 21 innings, striking out 29 and walking eight.

Koenig is helping fill Havel’s old role out of the bullpen, and Hayes calls him “our guy to go to in relief in pressure situations.” Koenig has not allowed an earned run in 16 innings, and opponents have an on-base percentage of just .254 against him.

“Jake Riding has looked good as our number three, and we are hoping to see a few of our younger guys take advantage of opportunities in the future,” Hayes said. Riding, a sophomore, is 3-0 with a 1.08 ERA, allowing 8 hits in 13 innings.

“Honestly, we expected all of these guys to do what they are doing now with the exception of Millette and Joey on the mound,” Hayes said. “Those have been pleasant surprises.”

While only two of the five Sunset League games have been competitive — the Trojans won the other three by an average of 16 runs — the schedule does provide some upcoming tests.

“We will be playing some solid baseball teams in the next two weeks in the Durango Tournament and the Coachella Tournament in California, which will give us a good idea of where we stand before playoffs,” Hayes said.

Sonerholm finished fourth in the 1,600 at last year’s Class 3A Southern Regional meet, and his time Saturday was only 2.5 seconds slower than that effort and more than 8 seconds faster than his previous best this season.

“The last few races I’ve been hanging out in the back and slowly moving up, but for this race I felt like I got out good and really finished strong,” Sonerholm said.

Senior Ethan Whittle cleared 5 feet, 10 inches, his season high, to finish third in the high jump, an event won by teammate Chance Farnsworth at 6-0. Dee Brown’s 35-10 in the triple jump was a personal record good for 18th place, while sophomore Bodhi Ledford’s 85-7 in the discus was also a PR.

The Trojans scored a handful of top-10 finishes in the field events, including two each in the shot put and pole vault. In the shot, junior Kylie Stritenberger threw a PR of 32-7 to finish seventh, while junior Destany Korschinowski’s 30-2 placed seventh. Sophomore Taylor Williamson finished fifth in the pole vault, clearing 7-6, while junior Romilyn Carreon cleared a season-best 7-0 for sixth.