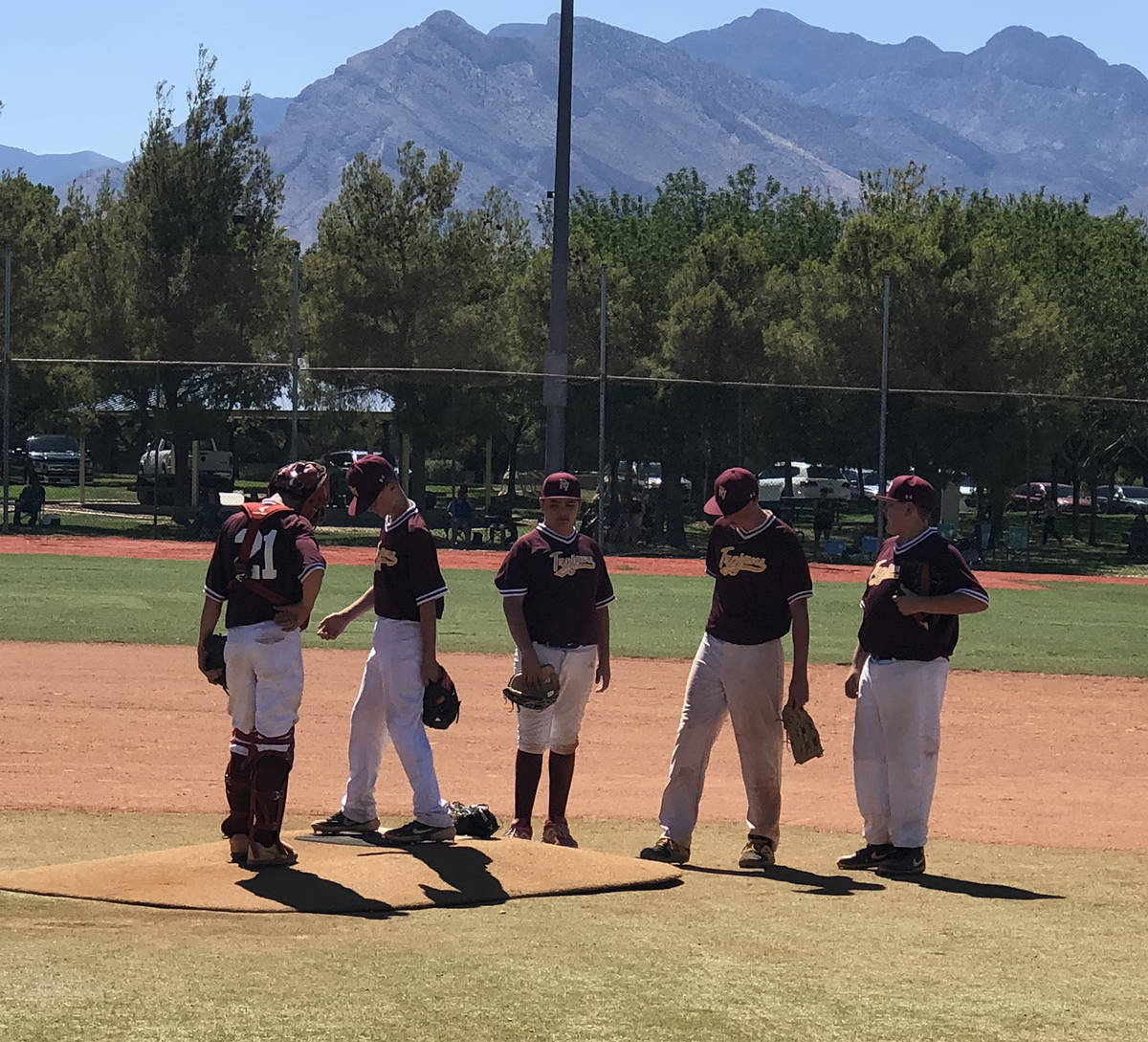 File photo Pahrump baseball players gather near the mound after a pitching change Sunday during the fourth game of a weekend tournament at Las Vegas Sports Park. 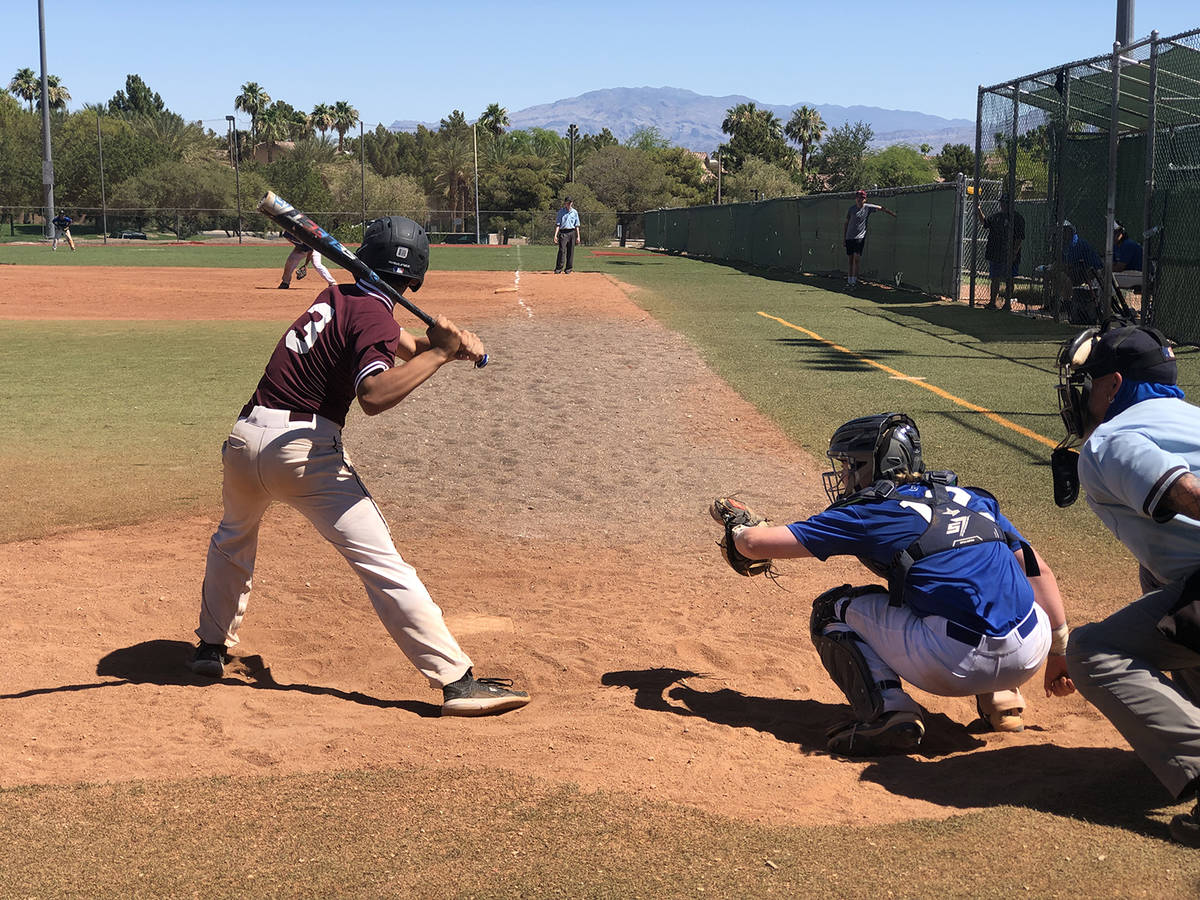 File photo Justyn Ybarra just before he doubled to the fence in left field as the Pahrump 18U team wrapped up a four-game, three-day tournament at Las Vegas Sports Park. 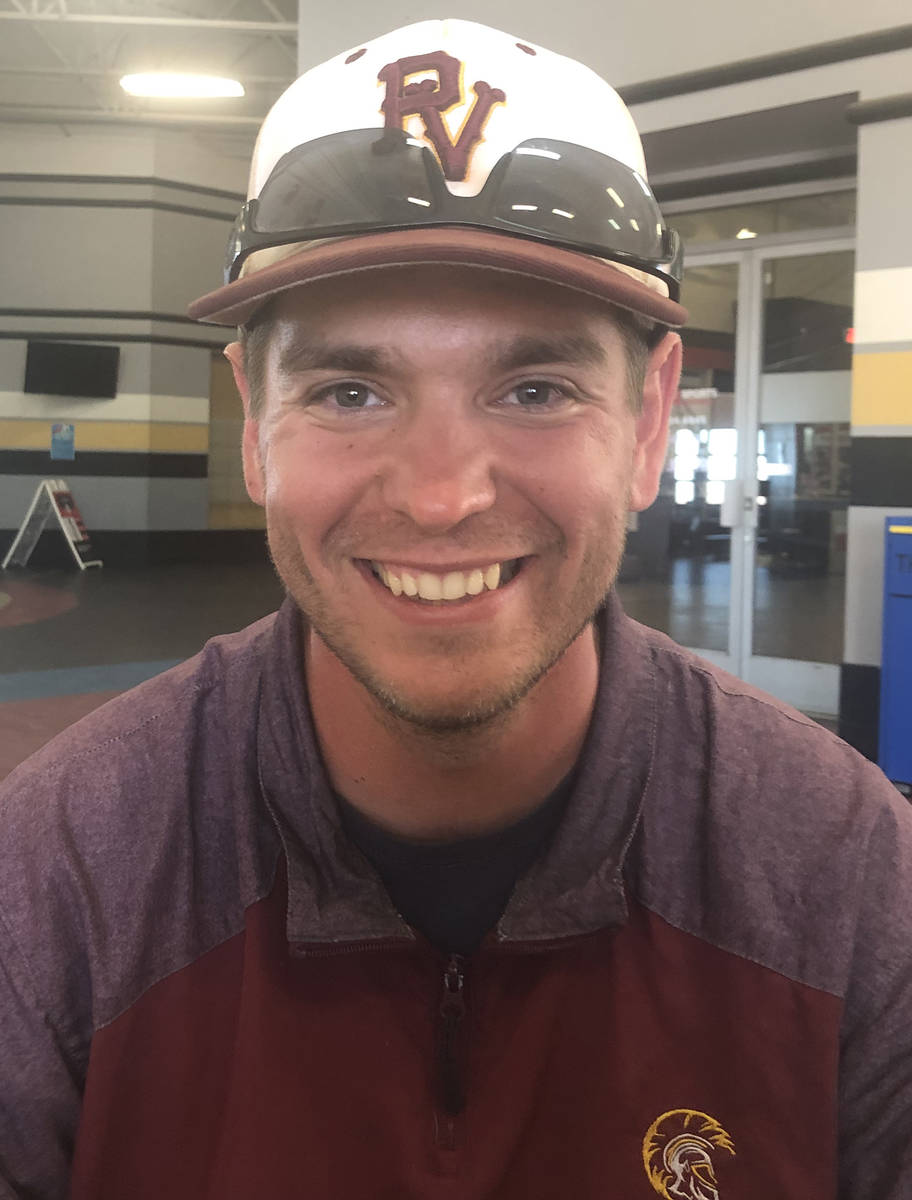 Tom Rysinski/Pahrump Valley Times Pahrump 18U an 14U manager Drew Middleton talks about the summer baseball season after a tournament at Las Vegas Sports Park.

“Connie Mack decided to cancel their season due to COVID, and the schools were not sure if they were going to be able to use their fields this summer,” recalled Pahrump Valley coach Drew Middleton, who coached the 18U and 14U teams this summer. “So it left us all alone to find our own games. … I sent an email to all high school coaches in Las Vegas basically saying we have a field, we have lights, come play us. It took a lot of time and effort to find us games, but our 18U team got 20 games and 14U got 16. All together, 36 games is a good summer for the program.”

Eventually, Las Vegas schools were allowed to use their fields during the condensed season that ended July 9. But with the problem of finding opponents settled, the usual summer questions returned to the forefront.

“We had two huge question marks for our varsity team,” Middleton said. “Number one, who’s going to step up on the pitching staff, and number two, who in our lineup is going to step up and produce offensively?”

A plus for the program was sheer numbers, as Middleton had plenty of players around to try and answer those questions.

“We had 42 kids play in our program this summer, which is the most we’ve had play since I have been out here,” Middleton said. “It was nice to see that many kids on our field.”

The 18U team finished 11-9, but more importantly Middleton saw signs the Trojans will be able to fill the holes left by the graduation of five seniors.

“We lost three huge arms in Jake (Riding), Jalen (Denton) and Ryan (Braithwaite),” Middleton said. “So I used this summer to see who could help replace those guys next year. Three guys that stood out this summer pitching-wise were Kyle McDaniel, Scott Hirschi and Micah Mendoza.”

There already were high expectations for returning players, but seeing them play against quality competition during the summer season made some things very clear.

“Kyle showed he could be the ace of the staff,” Middleton said. “He has the best stuff in terms of velocity and movement. He’s the guy that when he’s on the mound, you know you’re going to be in every game and should win that game.

“Scott Hirschi was by far our most consistent guy. He comes in, goes straight at guys and has a really good upbeat tempo on the mound. Coming in, I saw Scottie as a reliever/closer type, but after the summer he had, I would say he’s our No. 2.

“Micah Mendoza was probably our most surprising pitcher of the summer. He is a guy who doesn’t care who the batter is, he comes in and attacks hitters. He’s a guy that forces teams to put the ball in play, which, being a defensive-minded team, we like that. He also has a very resilient arm. He can come back off of short rest and give you quality innings. Micah definitely will compete to be in the high school rotation next year as a sophomore.”

Summer standouts at the plate included James Metscher (“the dude is an on-base machine”), Zack Cuellar (“he stepped up and hit the crap out of the ball”), McDaniel (“it got to the point where it’s shocking when he gets out”) and newcomer Dustin Lopez.

“Our four hole was the biggest question mark in the lineup,” Middleton said. “Who can continuously drive the ball, hit guys in but also handle off-speed pitches? Dustin, being his first summer with us, stepped up and took over that spot. This kid is legit and will be fun to watch the next two years.”

Meanwhile, the younger team was really young: five freshman, four eighth-graders and 13 seventh-graders. The group went 6-10, with four of the losses coming in a high-level varsity tournament.

“I loved what I saw from this group,” Middleton said.

“They weren’t afraid, they didn’t back down, they showed up and competed. No matter the score or the situation, these guys just battle. It’s exciting to know we have this kind of talent coming into the program in the next few years.”

Players who made an impression on the 14U team included rising freshman Andrew Zern, who moved recently from Las Vegas and is a “mature hitter,” Middleton said. Classmate Tyson Reddit impressed with his bat, moving from the bottom of the lineup to the No. 2 hole because of his “ability to barrel up the baseball even against quicker pitching.”

Eighth-grader Kayne Horibe drew attention for his ability to play anywhere and hit in the middle of the order. “This kid is just a baller,” Middleton said. “He had an excellent summer and will be a dangerous player for us for years to come.”

Middleton thanked assistant coaches Ethan Wald and John McHugh for their assistance this summer, saying “it doesn’t happen without their help.” Also in that category are the parents, for “hanging in there through last-minute adjustments and making sure the players get to the games.”

As for the players, “To come out and play through 110-degree weather is draining, but they struck through it. They gave me 100% all summer long, and they are just ballers.

“These kids love to play baseball and they love to learn, which is what will make this program so dangerous for years to come.”