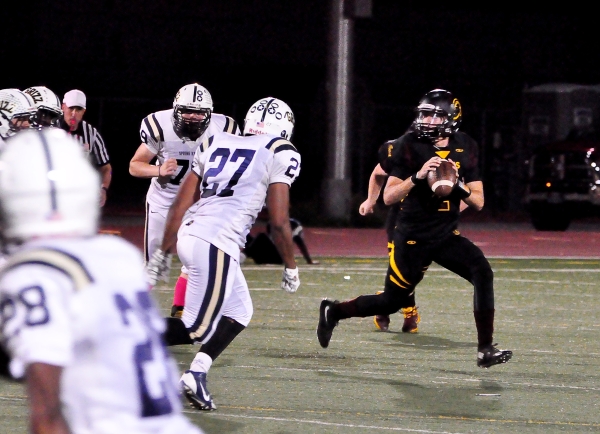 Former Trojans senior quarterback TJ Milk signed with the University of Jamestown in North Dakota on Wednesday, which was national signing day for colleges across the country. Jamestown is a Division II school.

Milk averaged 112.4 yards per game and had 1,012-passing yards this year. He was also honored with second team quarterback in the Sunset League.

“I am incredibly excited to sign and keep playing football,” Milk said. “I loved the atmosphere and the feel of everything at the school. I also liked the fact that the coaches believed in me and that was a huge part of it.

“It took me three days to make my decision and I signed today.”

Milk said the school he signed with is an hour from the capital, Bismarck and according to him the town has a population of around 16,000.

“They gave me a football scholarship,” he said. “I will be majoring in political science and then hope to get a law degree after college.”

He said the coaching staff was a big part of his signing.

“I really enjoyed talking to them all, especially the head coach,” Milk said. “The coaches believed in me and they told me they wanted me to come compete for a QB spot. Right now they said I had a good shot at making second string quarterback. At the moment there is a senior or junior in the position.”

“Having played at the next level, and having played with those who possess the attitude and skill-set to be successful in college, I know that Jamestown University is lucky to sign T.J. Milk,” Gent said. “I am very proud of TJ and all the work he has put in to get to this point. His work ethic and attitude will continue to bring him and his team success as the years go on.”