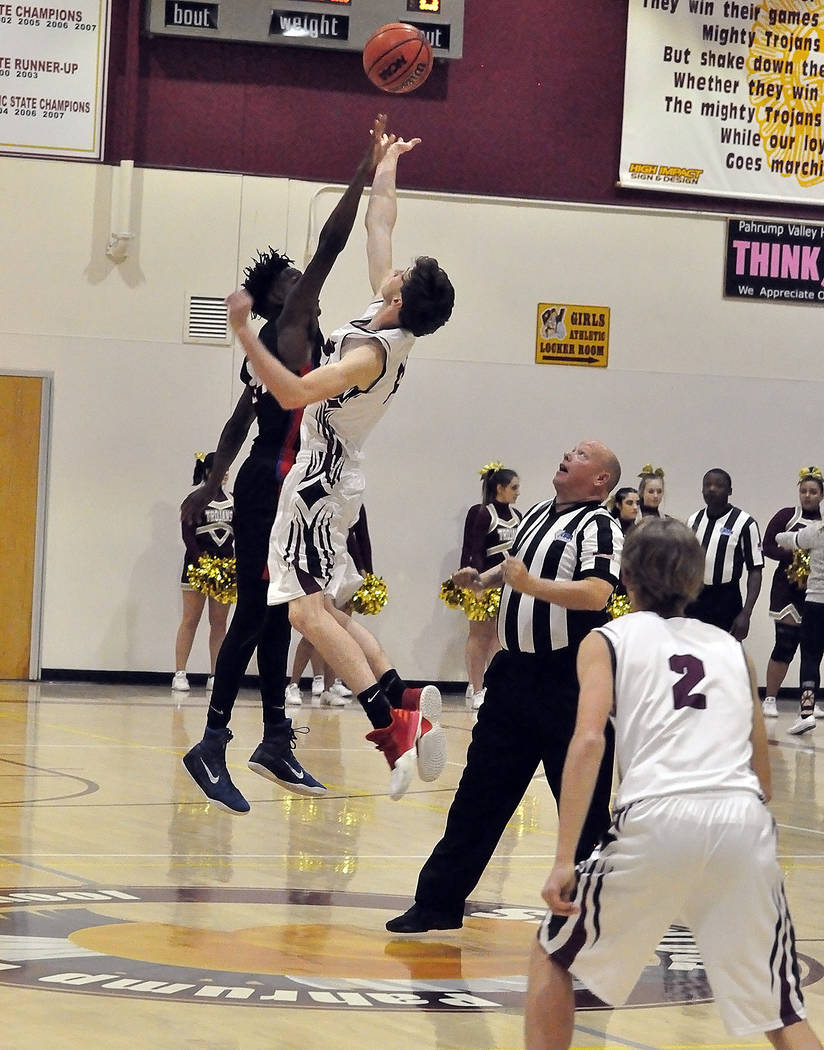 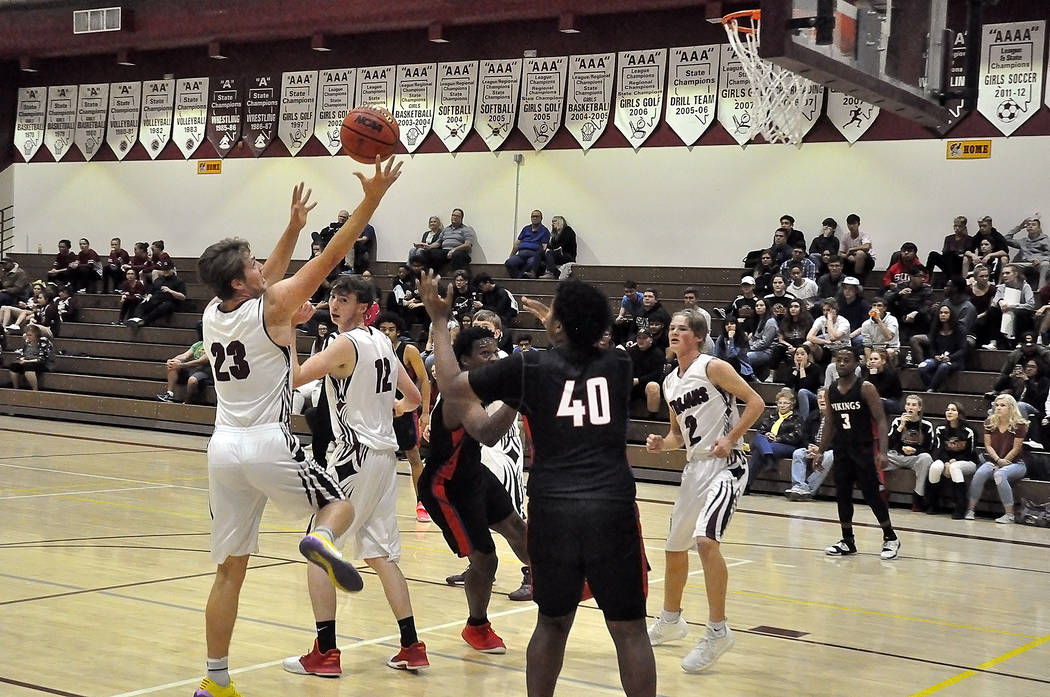 But once again, things went away. The Pirates outscored the Trojans 9-2 the rest of the way, including hitting their last six free throws, to leave Pahrump with a 52-45 victory.

“That was a tight game,” Pahrump Valley coach Dan Clift said. “It’s one of those where we knew it was going to be like that. We missed so many easy shots and struggled offensively.”

The game was tied at least once in each quarter, and each time the Pirates (5-5) took a small lead the Trojans (2-5) surged right back in posting their second win over the Trojans this season.

“Chance stepped up,” Clift said. “He had 15, and Grant stepped up and had 17. The last couple of games when Brayden’s been in foul trouble, Chance has scored for us. That’s huge, because when Brayden is not a threat offensively because of foul trouble, we need guys to step up.

“We’re just not deep enough at the post to lose one of those guys, and the same thing with Grant at the point. When he picks up quick fouls and we don’t see him for much of the game, that’s a tough one for us.”

Severt (12.0 points per game) and Farnsworth (9.7) on the inside and Odegard (11.1) on the outside have led the way for the Trojans. Severt and Odegard have each scored in double-figures in five of seven games, and Severt has scored 20 points twice. Losing any one of them to foul trouble creates a rough path to victory for the Trojans.

“We have to have that third kid in double digits,” Clift said. “If we have Brayden scoring 20 or Grant scoring 12 or 15, we need that third kid. Going into Moapa, we were saying we need to score 60 points and we need to stay out of trouble.

The Trojans are strong enough defensively for Clift to acknowledge he doesn’t feel a need to spend much time worrying about that end of the floor. Odegard and Farnsworth each scored more points than any Moapa Valley player. Jessup Lake led the Pirates with 14 points, while Derek Reese added 10.

Free throws weren’t a problem for the Trojans, either, as they shot 14 of 18 from the line, or 78 percent, which, as Clift noted, should be good enough to win. Instead, it was another game in which they were just short. But the coach is not discouraged.

“I feel pretty good for a team that’s won two ball games,” Clift said. “I think we’ve come a long way in terms of growth. Offensively, we’re able to run stuff that we wanted to run. On film, I’m liking what I’m seeing, but shots aren’t falling for us as much as we’d like.”

The Trojans won a close one the night before, as Farnsworth scored 16 points and Severt added 14 in a 49-46 win over Somerset-Losee despite 21 points apiece from Johnny Bass and Caevee Cruz for the Lions.

“The Cruz kid and the Bass kid both shot the lights out,” Clift said. “I was blown away. But that was their whole offense, to move these kids to the corner. I don’t know if they took a 3-point shot that wasn’t from the corner. Cruz had all of his points from 3.”

Somerset-Losee is playing an independent schedule this season, and the Trojans will return the visit and play the Lions on Jan. 28 in North Las Vegas.

“That Somerset-Losee team, without those two kids, I don’t think there was another kid who started for them that is as good as any of our kids,” Clift said. “I could have done a better coaching job in terms of taking those two kids away, and we would probably win by 20.”

Next up for the Trojans is Sunrise Mountain on Friday night at home. Then a trip to Mountain View Christian’s Vegas Invitational before getting back into a regular schedule beginning Jan. 8 at Chaparral. League play resumes two days later at Del Sol.

“I feel good, and I’m trying to convince the kids of the same thing,” Clift said. “But I do know you have to win. By the time we get back from Christmas break we need to have two or three more wins.”