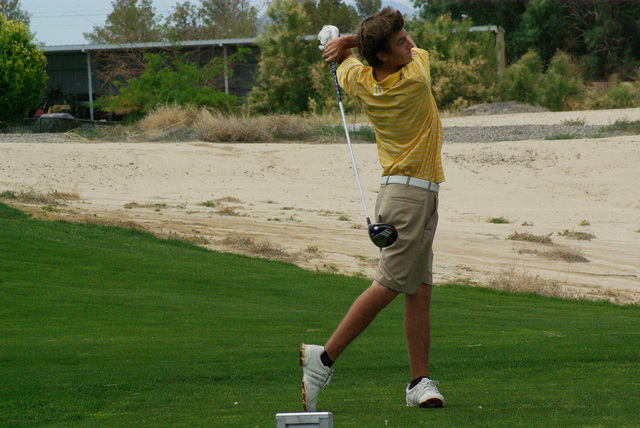 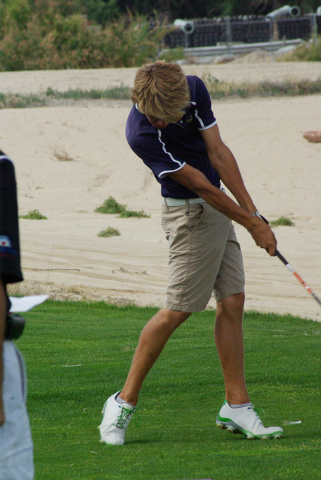 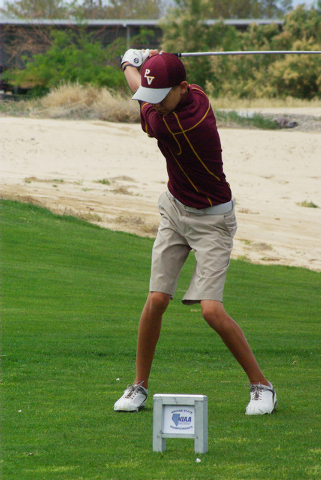 High school golfers from all over the state descended on Pahrump for two days of golf. The Nevada Interscholastic Activities Association had its 2014 state golf championships in Pahrump at Mountain Falls. The two-day tournament started on Wednesday and ended on Thursday.

Trojans Golf Coach Bob Hopkins knew the state finals would be here and he wanted his whole team to qualify for the event. His expectations were high for his team on their home turf.

“We didn’t play real well yesterday. We had to count over 100. Hopefully we play better today. We actually struggled on our home greens. I guess they were a little bit nervous. For Austen, Kelby and Mike this is their first state tournament. Ancell played very well on the backside. Ancell is battling for fifth. I am happy with that and how he played in his first state tourney. I think we can improve a lot. I think we need more wind here for it was just too calm for my team. If you look at it, Faith and Boulder did not play very well either. I expected them to play a lot better. There were not a lot of low scores in our division. We are down 15 to Elko and maybe we will beat Elko and Spring Creek,” Hopkins said.

Pahrump was led by Austen Ancell on the first day of competition who carded a 78. Not too far behind was teammate Kyle Steib who posted an 82. Derek Moore carded an 85, Branden Hastings a 98, Kelby Lindberg a 105 and Mike Hildebrand a 103. Pahrump’s team score was 446. Spring Creek and Pahrump are tied.

In Division 1-A play Pahrump rival Faith Lutheran was also up against the top teams from the North and as a team posted a 403 on the first day. This was high for them. Faith had only two golfers in the 70s, Charlie Magruder carded a 77 and Trenton May had a 78. The rest of the team was in the 80s.

This gave the Lowry Buckaroos an opening and they took it. As a team the reigning state champions carded a low 390. The Lowry Buckaroos had four golfers in the 70s. Andres Mendoza led the team with a 74, Chris Mendoza carded a 78 and Gray Mendoza and Josh Shaver each had a 79. Joseba Criswell had an 80 and Josh Rose posted an 85. This put the Buckaroos in line for a repeat. Faith is in second place, with Boulder City in third, Elko in fourth, Pahrump and Spring Creek are tied for fifth.

As far as individuals, Jacob Causey from Moapa Valley had a brilliant day of golf and is currently the Division 1-A leader at 71. He is a total surprise. Many believed the 1-A would be a duel between Magruder and Luke Logan of Boulder City.

Logan carded a 73 for Boulder City. Logan was the Southern Division 1-A Regional Champion for the third year in a row. Andres Mendoza from Lowry had a 74.

The Southern golfers have the advantage because they do golf at Mountain Falls quite frequently. In addition to league appearances at the course the golfers see the course every year because they have the regional finals here, but none of the teams from the south took advantage of this.

In Division 1, after the first day at the Falls Nick Turner from Bishop Manogue leads the pack with a 2-under par 68. He is closely followed by two golfers, Van Thomas of Arbor View and Brandon Bauman of Palo Verde, who each have a 69.

There is a three-way tie for first after day one with Bishop Gorman’s Owen Rosebeck, Palo Verde’s Bradley Collet and Bishop Manogue’s Nick Turner. All three carded a 70 on the first day.