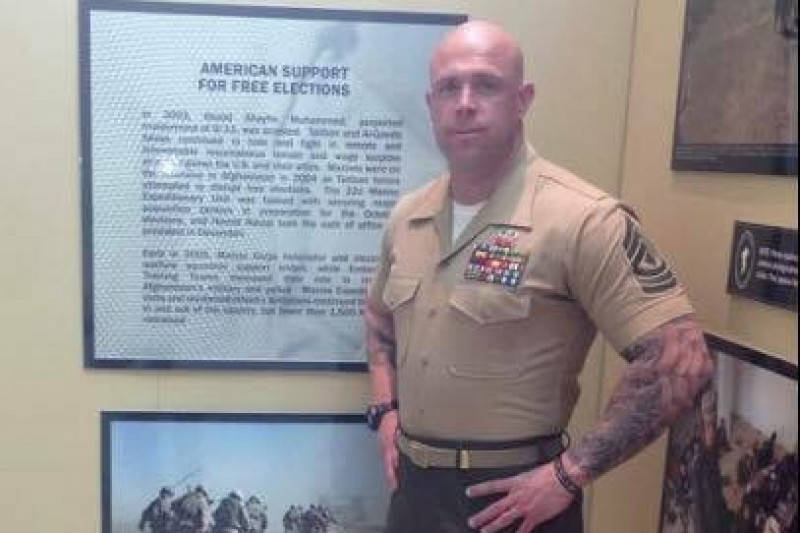 Special to the Pahrump Valley Times Chris Carlisle was a retired combat marine and recipient of the purple heart. According to his racing team he was injured at mile 290 and passed away of internal injuries, while being lifeflighted to Reno.

A motorcyclist died as a result of a crash while competing in the 550-mile Best in the Desert Vegas to Reno off-road race, organizers said.

The victim was identified as Chris Carlisle, 39, of Lake Elsinore, California. After the wreck he was taken to Mount Grant General Hospital in Hawthorne, where he was flown to Reno for treatment and died en route.

The crash happened south of Mina, according to his racing team member Nick Hamm, between pit 8 and pit 9 at mile 290 during the longest off-road race in the United States.

The crash was one of two in that race, which started in Beatty on Friday morning and finished in Dayton on Saturday morning.

The second, Best in the Desert reported, involved a quad and a truck. “We have checked on the quad rider, and he is recovering in a Reno hospital,” the group said in a news release.

The victim of the fatal crash, Carlisle, was a retired Marine first sergeant and was the recipient of a Purple Heart. He served three combat tours.

“Our thoughts and prayers are with the families, and we know the entire off-road race community sends their support,” Best in the Desert said in a news release. “More details will be released as they become available.”

On the page, it simply said, “Chris lost his life while racing with the Warrior Built organization in the Vegas to Reno event in a tragic dirt bike accident.”

It reads, “Many people knew Chris as a Marine, but he was so much more, a devoted father who loved his son Dylan and two daughters, Megan and Hailey; a loving son to his parents Melinda and Mike; the oldest sibling, role model and “leader of the pack” to Brian, Dana, Kimee, and Tyler; a fun-loving uncle to his seven nieces and nephews, and a loyal friend to many.

“His faith in God and love for helping others made him incredibly special to those who knew him. Chris was passionate about helping other Marines, and additionally served with the Wounded Warrior and Mighty Oaks programs,” the GoFundMe me page states.

Chris’ mother, Melinda, “has taken on the emotional and financial burdens of transporting his remains from Nevada back to California, as well as the burial and funeral costs,” the page states. “It is the desire of friends of the family, as well as her other children that she not be burdened by this cost in this time of incredibly heartbreaking loss. Any additional funds will be placed in trust for his daughter’s college expenses.”

Other members of Carlisle’s racing team were Giovanni Perez, age 23, Nick Hamm, 41, and Jason Hamm, 36, all of Lake Elsinore.