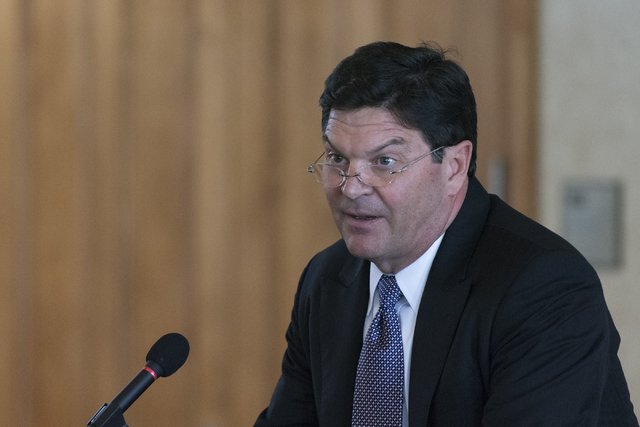 Jason Ogulnik/Las Vegas Review-Journal Robert McBeath is shown in a 2016 photo. He was appointed last week by Nevada Gov. Brian Sandoval to the Nevada Athletic Commission. McBeath is the president of OptumCare and Chief Executive Officer of Southwest Medical Associates.

Dr. Robert McBeath is the newest appointee to the Nevada Athletic Commission.

His appointment was made last week by Nevada Gov. Brian Sandoval.

“As a physician who has experience in multiple medical specialties, Robert McBeath will provide a unique and necessary perspective to the Nevada Athletic Commission,” Sandoval said in a statement.

“His vast business experience will also be an asset to the commission,” Sandoval said. “The safety of our athletes is a top priority and having a physician on the commission will ensure that health considerations are at the forefront of the regulatory and licensing process.”

McBeath is the president of OptumCare and chief executive officer of Southwest Medical Associates, where he has also been a leader in innovation and technology.

“I’m honored and thrilled to join the Nevada Athletic Commission,” he said. “I want to thank Governor Sandoval for appointing me to this prestigious position and for giving me this opportunity to serve. As a longtime Nevadan, physician and avid sports fan, I appreciate the vital role this commission, its staff and members play in regulating some of the biggest sporting events we host in our state.”

“I look forward to working with Commission Chairman Marnell, Executive Director Bennett and my fellow commissioners to make sure Nevada remains a world leader in this area and to protect and promote the integrity, health and safety of boxing, mixed martial arts and related sporting events happening in Nevada,” McBeath said.

He opened Urology Specialists of Nevada in Las Vegas in 1996 as the sole practitioner.

Over the years, McBeath built the practice into a group of 13 providers and 75 employees. At the same time, he also developed and managed several aligned health care businesses, including a community-wide lithotripter services company and Specialty Surgery Center.

McBeath will replace Dr. James Carpenter for the remainder of this term that ends Oct. 31, 2019.

Ault is a member of the College Football of Hall of Fame.