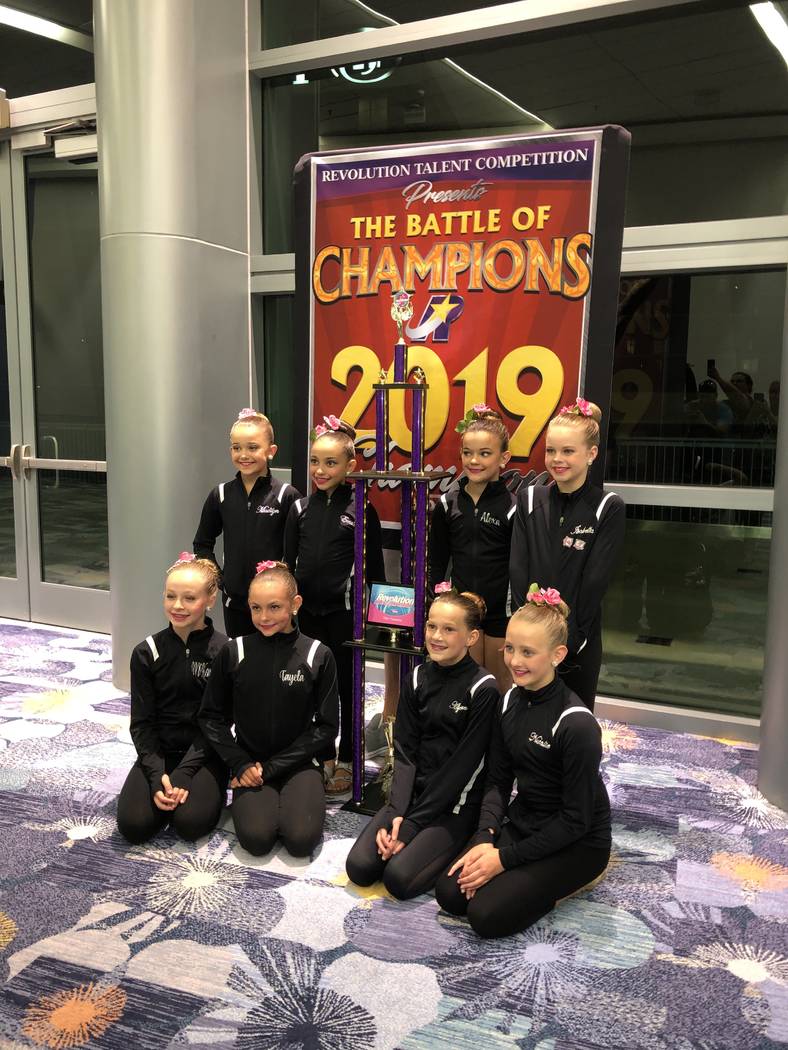 Special to the Pahrump Valley Times Nevada Dance Centre dancers pose with the trophy for winning the overall championship at a Revolution Talent Competition event at Anaheim Convention Center in California. 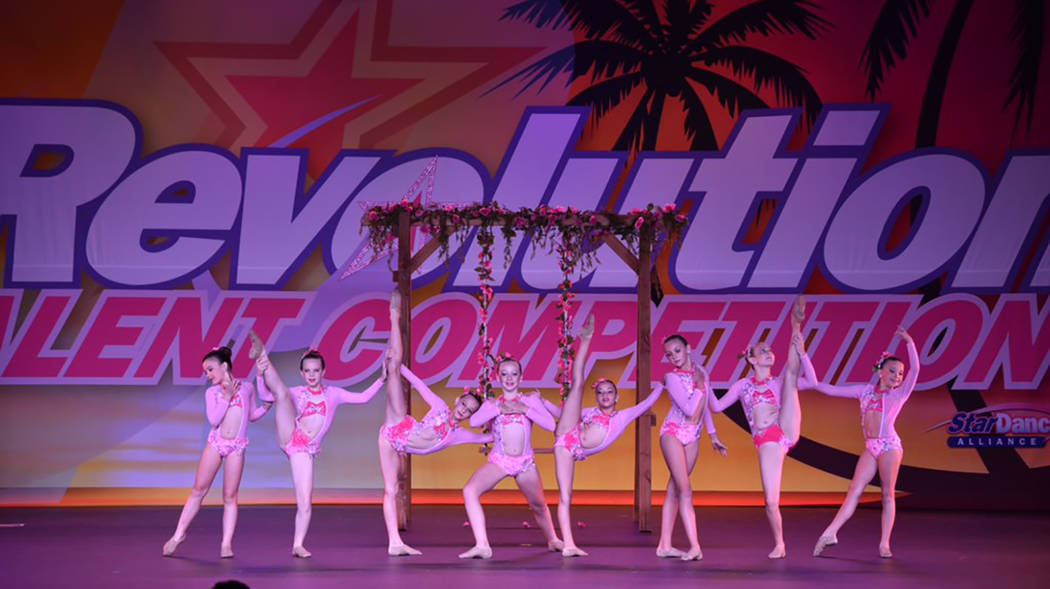 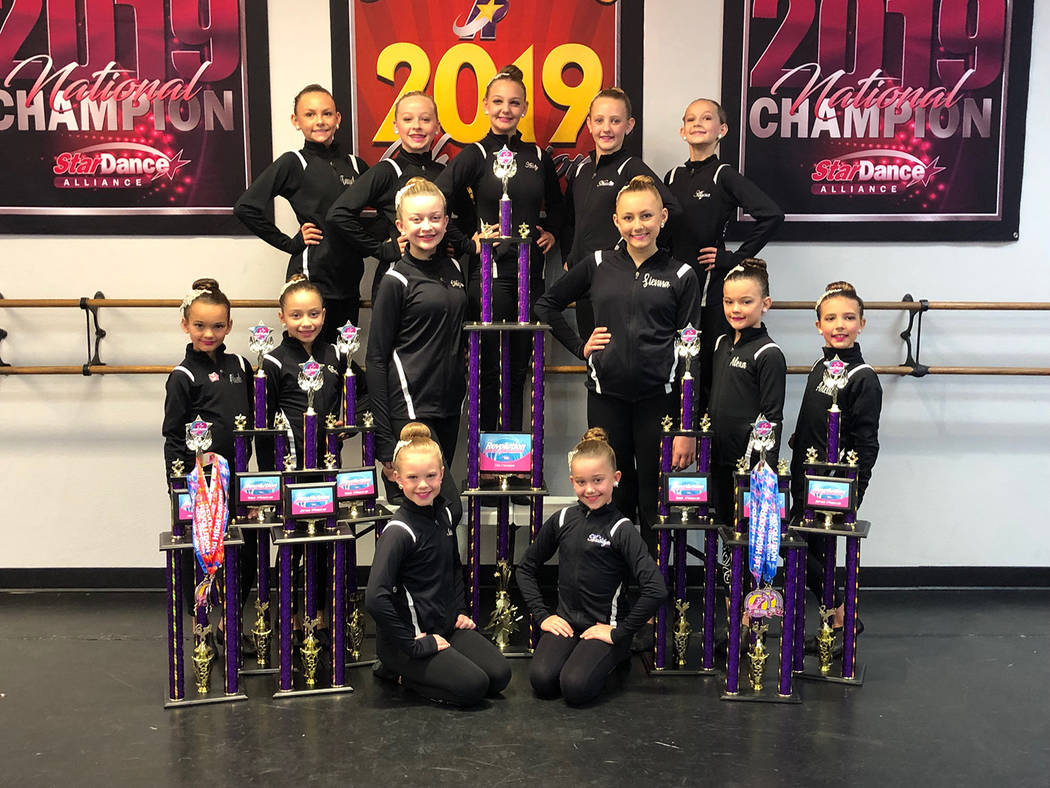 Special to the Pahrump Valley Times Dancers pose with trophies in front of them and three championship banners behind them at Nevada Dance Centre in Pahrump.

From the outside, the Nevada Dance Centre is an unassuming place. But its location in a Basin Road strip mall conceals its status as the home of champions.

A group of young dancers from that Pahrump studio went to the Anaheim Convention Center in California in July and came back with not one, not two, but three championship banners.

Revolution Talent Competition has been running dance events for 13 years and holds more than 60 regional competitions that feed into three national championship events in the Poconos of Pennsylvania, Pensacola, Florida, and Anaheim.

“At nationals, there were 68 groups in our division,” Wade said.

And her kids beat them all.

At any age, dancing at a high level requires serious commitment. And the girls who gathered at the studio on a recent Monday for a dance class are no exception.

“I just took a class and really enjoyed it,” said 13-year-old Maylene Higginbotham, who said she learned about Nevada Dance Centre from Sienna and Tayela Brown and has been dancing for three years.

Higginbotham said she gets excited to come to the studio every day — and that’s four hours per day, five days a week. “I just really enjoy it.”

Sienna, 13, and Tayela, 11, also were on the competition team that went to Anaheim. “It was amazing,” Tayela said of winning, while Sienna said the group was confident going in but, “I was surprised we won.”

Wade said the group did a lyrical dance to “Childhood” by Michael Jackson for the overall competition, which included eight dancers. By then, her team already had two banners to bring home and was performing with confidence.

“I always tell these parents that children are born with the talent, we just give them the skills to help them achieve their goals,” Wade said. “It gives the children something to do and be confident in and feel pride in themselves. Not everybody is going to be a professional dancer, but the skill and determination and the time management … most of our dancers are straight-A students.”

Nevada Dance Studio is a family affair, as Wade’s daughter, Juliette, also teaches there and joined her mother in choreographing the winning routines.

“I tell everybody I have the best job in the world,” said Kelly Wade, who said she has been involved with dance for 45 years and has had dance studios for 25 years, previously in California and Arkansas before opening one in Pahrump three years ago. “I get to come in here and dance, play music, and I get to be with my children and grandchildren. They live in Las Vegas and drive here. They come here and dance probably three or four times a week.”

And while Wade stresses that not everyone will be a professional dancer, former students dance on cruise ships and on dance teams for professional basketball franchises.

But the kids who brought home three championship banners from Anaheim don’t care about that yet.

At 11, Alyssa Eaton is among the most experienced dancers on the competition team.

“I danced at another studio since I was 3 and then here for two years,” Eaton said.

Eaton said dancers can feel it when a routine is going well.

“Some competitions it doesn’t feel so good, and then others you just know you’re going to do good,” she said. It felt good at nationals, she said.

For others, dancing was more spontaneous.

“My mom asked me if I wanted to dance, and I said yeah,” said 11-year-old Natalie Minor, who has been coming back for almost three years.

“I just kind of took a class, and I wanted to keep coming back,” said Isabella Simpson, 10, who also has been dancing for three years. “I really like it.”

And a big reason all of these young girls — there are few boys, and they are younger than the competition dancers — keep coming back is the Wades.

“Miss Kelly and Miss Juliette are the nicest people you’ll ever meet,” Addison Morin, 13, said. “Miss Kelly can get a little crazy at times, but she is really, really nice, just like everybody else here. It’s like a family.

“It’s one of the best things I’ve been doing.”

That’s music to the ears of Kelly Wade, who has roughly 80 students enrolled in the studio.

“The competition team, it’s only their second year of competing, so to win overall is a huge accomplishment,” she said. “They put in a lot of hours and determination and dedication.”

Wade said her students run from under 5 up to 18 years old, and not every kid who walks in the door has had previous dance experience.

“Some have danced, some have done gymnastics, and some come in and haven’t done anything,” she said. “Some just walk in and want to do it.”

And as the young dancers said, many of them fall in love with it and keep at it.

And what makes them happy these days is seeing three large championship banners hanging on the wall at Nevada Dance Centre.