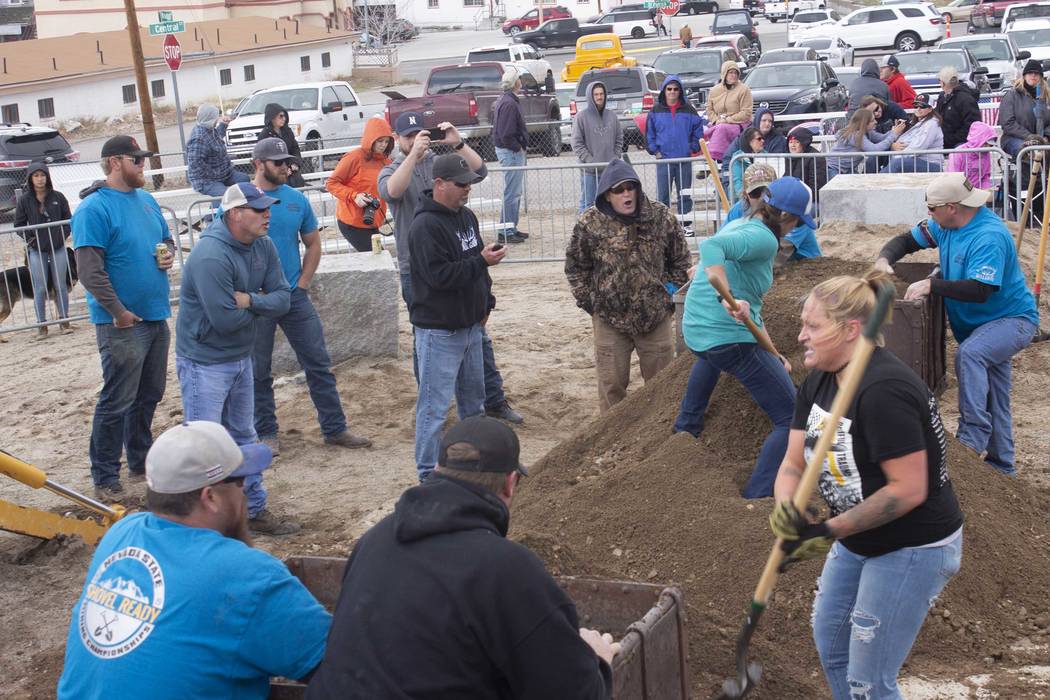 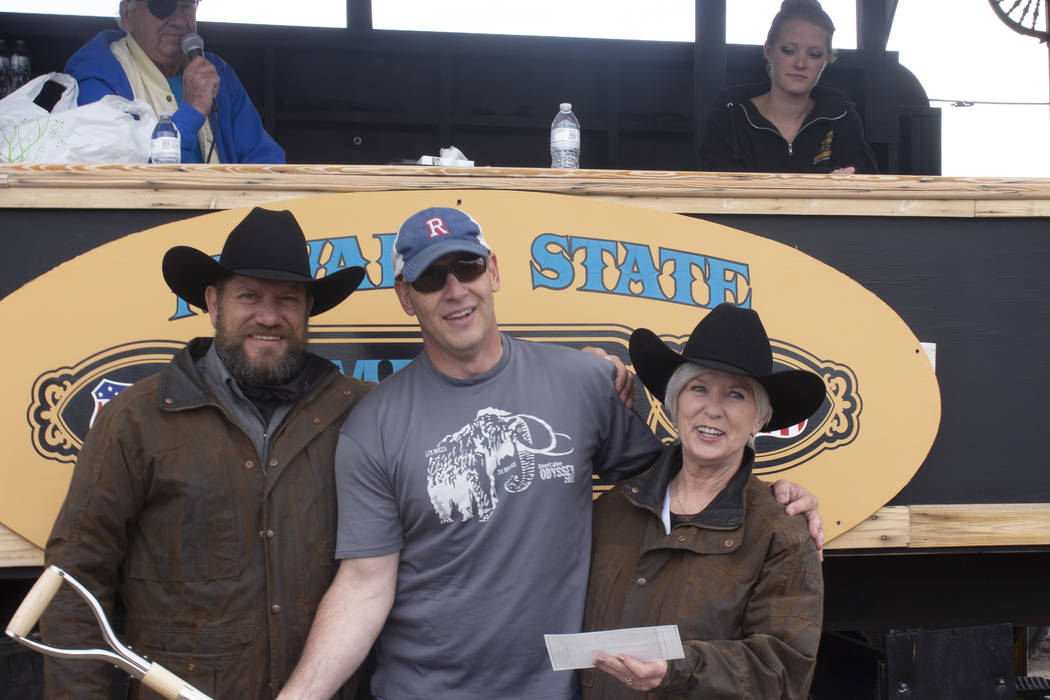 Jeffrey Meehan/Times-Bonanza & Goldfield News Oz Wichman (left) handed out prizes to the winners at the 2019 Nevada State Mining Championships with his wife and Nye County Commissioner Lorinda Wichman (right). In the center is James Eason, the winner of the men's mucking competition at the mining championships. 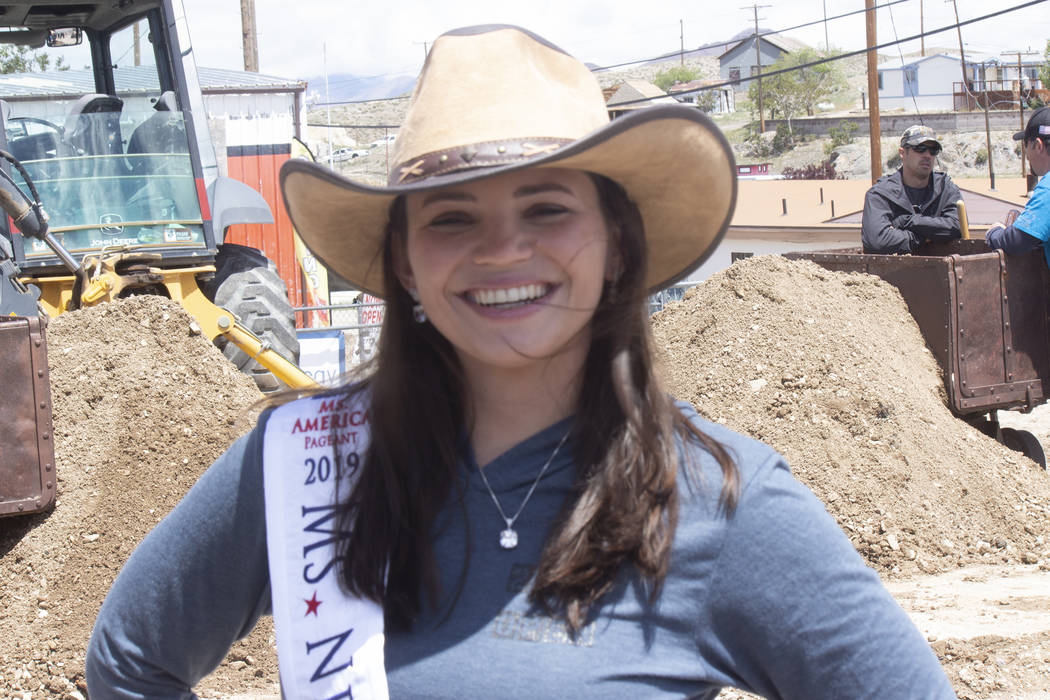 Jeffrey Meehan/Times-Bonanza & Goldfield News Katie Jo Williams, Ms. Nevada State in the 2019 Ms. America Pageant, entered the women's mucking competition at the Nevada State Mining Championships in Tonopah at the end of May. Williams came in second place out the the three contestants in women's mucking. 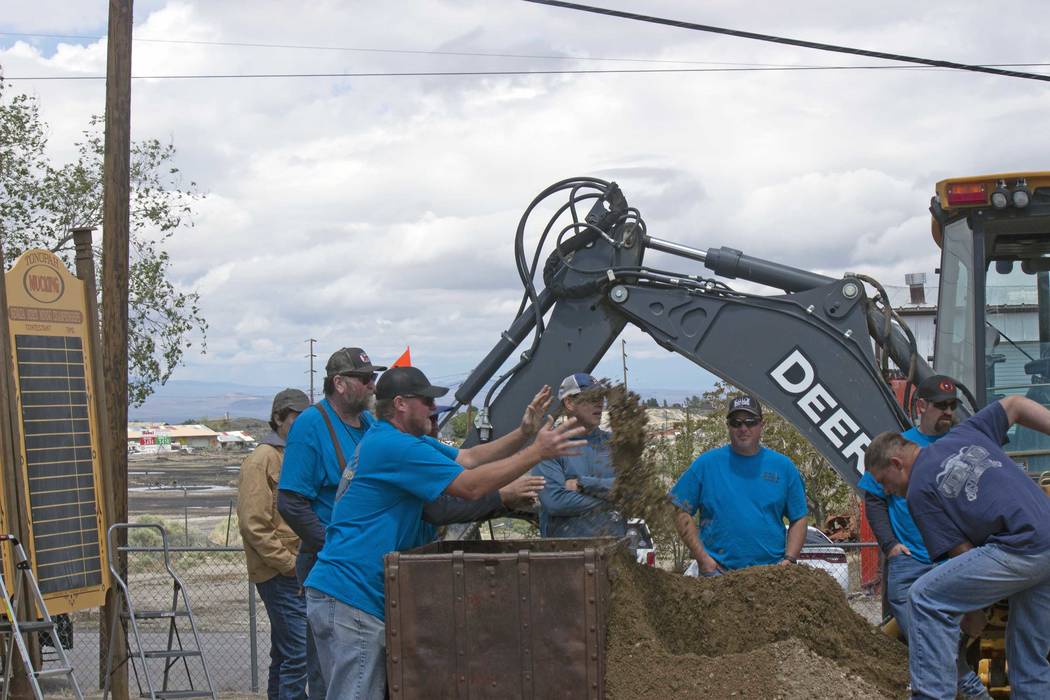 Another year of heavy lifting occurred in Tonopah with the 2019 Nevada State Mining Championships breezing through during the 49th annual Jim Butler Days celebration.

James Eason, moving one ton of muck into an ore cart with a time of 2:04.54, powered his way to first place in the men’s mucking competition. Eason came in just ahead of Craig Leedy who had a time of 2:06.58 with Matt Decker coming in third with a time of 2:44.06 in the parking lot of the Elks Lodge in Tonopah.

Competitors battled temperatures in the mid- to low-40s during the competition. Rainfall also got things a little wet, which eventually led to some of the competition being canceled.

A reporter from the Times-Bonanza caught up with third-place finisher Decker prior to the championships getting underway.

“This is one of the competitions to come to,” Decker said.

Decker is planning on stopping at a few more competitions this year.

“We’ll hit a bunch of Colorado’s in July and August and then back up to Reno for the world championships in Carson City,” he said.

Decker said he’s been coming through the area for the event for about 20-plus years, and he takes in the parade and other festivities of Jim Butler Days.

Oz and Lorinda Wichman, named king and queen of Jim Butler Days, made their way down to the mining championships and handed out prizes to some of the winners. Wichman is a Nye County Commissioner from District 1 and a resident of northern Nye County.

The top winners for men’s mucking were James Eason and Craig Leedy with a time of 0:48.72, which brought them a cash prize of $200. The next two spots in men’s mucking went to Steve MacDonald and Matt Decker for second and Kelsey Godfrey and Mike Carapos for third.

There were three entrants in the women’s mucking competition.

Williams was also at Butler Days for another purpose. She is Ms. Nevada State in the 2019 Ms. America Pageant. The winner of that pageant is set to be named in the fall.

The mining championships have gone on for a century or more, according to information on the Tonopah Mining Park’s website.

This is the 49th year the competition has been held on Memorial Day weekend during Jim Butler Days.

The winner of the men’s single jack competition went to Matt Decker who took home $1,200. Contestants hand drill for an allotted amount of time with the deepest hole winning.

The men’s double jack competition was canceled because of weather.