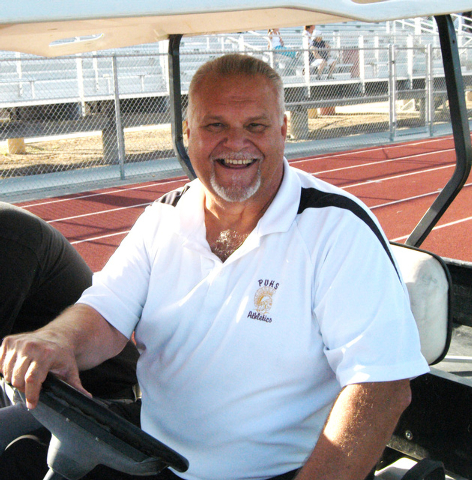 Pahrump Valley High School has been going through some changes lately. The Nye County School District announced in October of last year that all Nye County schools will start on Aug. 11 and get out on May 22. These changes according to the district allow the students to complete the semester prior to Christmas. They said research said it was better for the kids to have the semester all finished before Christmas break. (see PVT Oct. 9, 2013)

The PVT sat down with Chris Brockman, Trojans athletic administrator, to ask him how the changes would affect the student athletes at PVHS.

Q: What is the effect of the new school schedule on Pahrump Valley High School sports if any?

A: The schedule does have a little effect. Our finals will be given the week before Christmas and the week before Christmas we have games because Clark County does not schedule any games during their finals week. It won’t affect the kids as far as out of class. They will still have the opportunity to take the final, but they could be away at a game on Wednesday night and they could have another final on Thursday, so to study for that final they need to study at the game.

Q: What about spring sports? The current schedule has the spring state finals finishing up during our graduation.

A: There is another problem. The NIAA was talking about moving up the state tournaments in the spring. We talked to Dale Norton and the only thing the May schedule would interfere with is graduation. The sports schedule in spring if left as is had the track and baseball finishing state during the week we graduate. As of now, the NIAA has not made any changes to the spring schedule and if they don’t we will move graduation.

Q: How is the football schedule affected by the new schedule? This year the practices start August 10.

A: The first football practice remains the same. Football is the only sport that does two-a-days. This year they will not be able to do it because we will already be in school for the initial start days of practice. The team will only have practices after school. Joe Clayton has said he would try to get some of the traditional conditioning done prior to school starts, but we have not finalized anything yet.

Q: Isn’t this a big thing for our team?

A: It’s all about put-in time. If you get kids that have not been in your program, then you need more put-in time. It means you basically have 10-12 hours less practice. It all depends on what they do, how they do it and how many new kids there are learning the system. With the two-a- days process, you do a lot of weeding out of the kids and you find out who really wants to be there. We should have more kids staying out for football because they don’t have to go through two-a- days. I know he has 60 kids going to camp this year. There is a big group of kids that want to invest and get better as players. Again, looking at the state, they will not let us start early. We didn’t even apply for a waiver. Last year when northern schools all started early they did not approve any waivers.

Q: Besides the schedule changes are there other changes in the department this year and what about tennis? Tennis was supposed to start last year and was delayed. Will tennis get off the ground this year?

A: We have two teachers who will run the tennis intramural team. We will have the kids sign up in the fall. We are looking to start this sport, but we don’t want those kids to come from a current fall sport. We would like to introduce the sport and have the athletes come from a different group of kids who need the opportunity to compete. We will look at the interest. Michael Lyke, he teaches math, and was new last year, will be the coach.

Q: Are there any other new coaches for the fall?

A: There will be no new head coaches for the fall. Ed Kirkwood is the new athletic director. Ed said he always wanted to do it. I am excited to have him aboard. It was just great to have him as coach.

Q: Any other coaching jobs for assistants?

A: We have a few. We need an assistant girls soccer coach. We need a position as an assistant in boys soccer, we may need two in football coaches and we need a new assistant coach in volleyball since Ed will not be doing that this year. Ed will remain a basketball coach and is stepping down as head track coach. He is staying on as a basketball coach because he is needed there and athletic directors can coach if needed. I know he is a great coach, but I think I get more bang for my buck with him as AD. He will still work closely with the new head track coach to make sure that job gets done well. He will not just throw the track program aside.