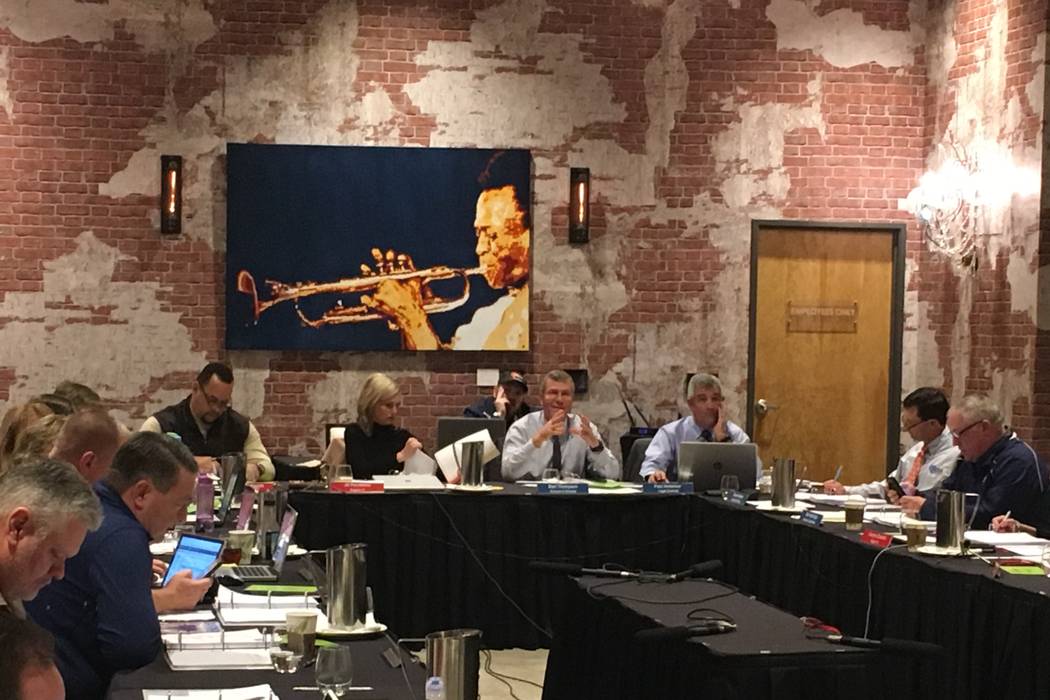 The NIAA Board of Control voted Thursday to approve the principals' proposal and eliminated the 5A classification at the Whitney Peak Hotel in Reno, Jan. 18, 2017. Justin Emerson/Las Vegas Review-Journal.

In the end, the principals got their way.

After opposing the recommendation of the Nevada Interscholastic Activities Association realignment committee, a contingent of Clark County School District principals flew to Reno to present their proposal. The Board of Control was tasked with choosing between the two.

Meeting in Reno at the Whitney Peak Hotel, the board voted 7-2 on Thursday in favor of the principals’ proposal. There will be no 5A classification when the schools realign next school year.

“I think the most important thing was that the Board of Control heard from the principals, heard a united voice,” board president and Clark principal Jill Pendleton said. “When the schools that are impacted are making the recommendation, it only makes sense to support that.”

The principals’ change is not as radical a shift as the committee proposed. There still will be four classes, and Class 4A will still have four leagues. Chaparral, Desert Pines and Mojave join 4A for football, and Rancho drops to 3A.

The proposal fixes one of the biggest issues — the Northeast League — with the former alignment. Canyon Springs, Las Vegas, Eldorado, Rancho and Valley comprised the weakest football league with a combined regular-season record of 15-35. It gave enough postseason rubric points to Las Vegas (3-7) that it was recommended for the committee’s 5A, which many in the room saw as a problem.

“I’m a true believer that the system we had put into place two years ago was truly flawed,” board member and realignment committee chairwoman Pam Sloan said.

Sloan recommended pushing the vote back and having the principals meet with the committee members and forming a compromise, but she eventually voted in favor of the principals’ proposal.

The nonfootball realignment will look similar, with Chaparral and Mojave remaining in 3A, and putting Cheyenne, Rancho and Tech in 4A.

The next realignment cycle begins for the 2020-21 school year, and the realignment committee will be appointed in September. Principals expressed support for a 5A at that time, and they want each sport to be realigned separately.

“I’m excited for the athletes in Southern Nevada that we can take a pause for a minute and look at realigning sports in a manner such that students can participate, students can achieve success and begin to look at sport-by-sport alignment two years from now,” Eldorado principal David Wilson said.