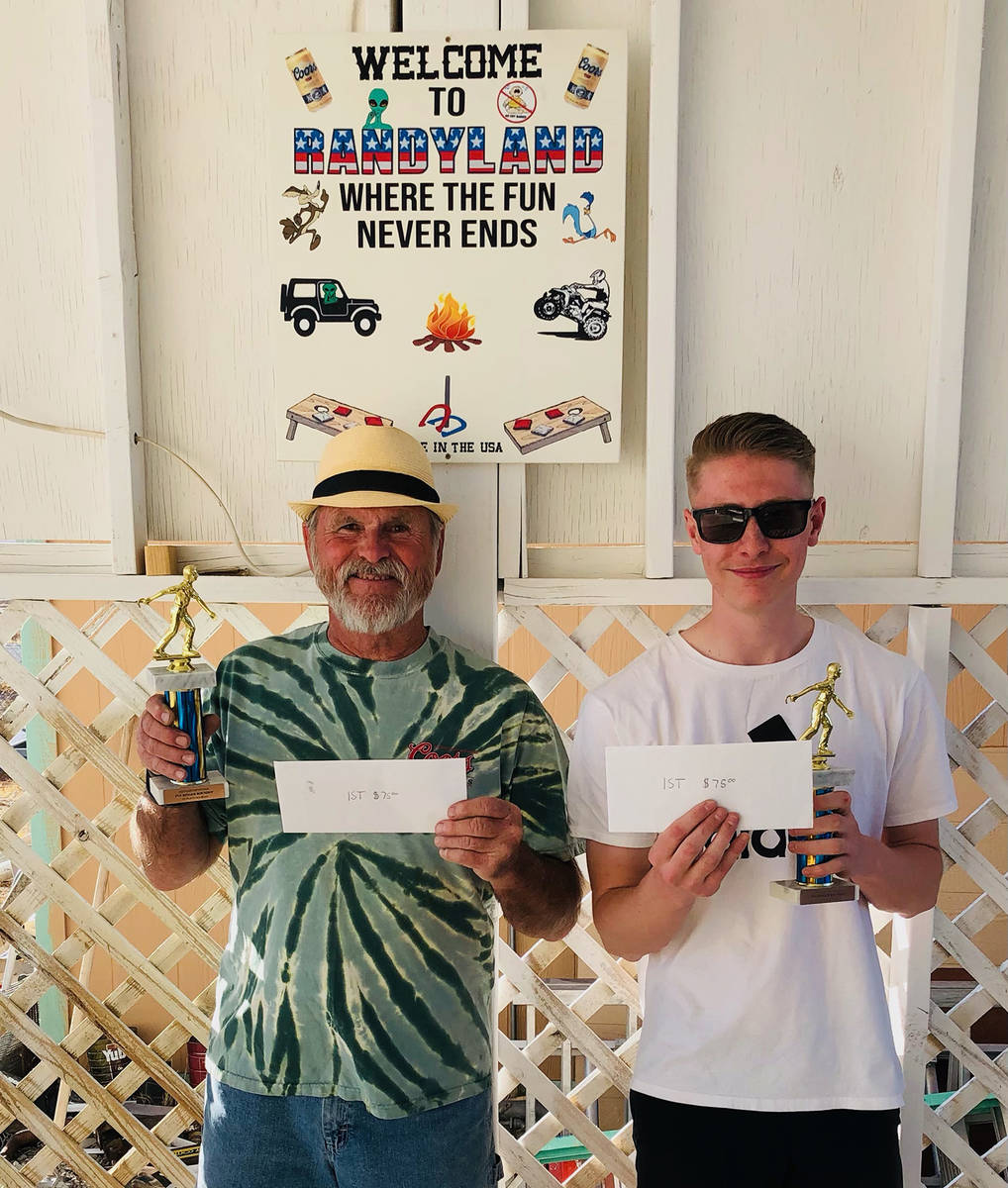 Lathan Dilger/Special to the Pahrump Valley Times Mike Nicosia, left, and Kasey Dilger show off their trophies after winning the Randyland Ringer Roundup on Jan. 16 in Pahrump. The two went undefeated in the double-elimination tournament, and each pocketed $75. 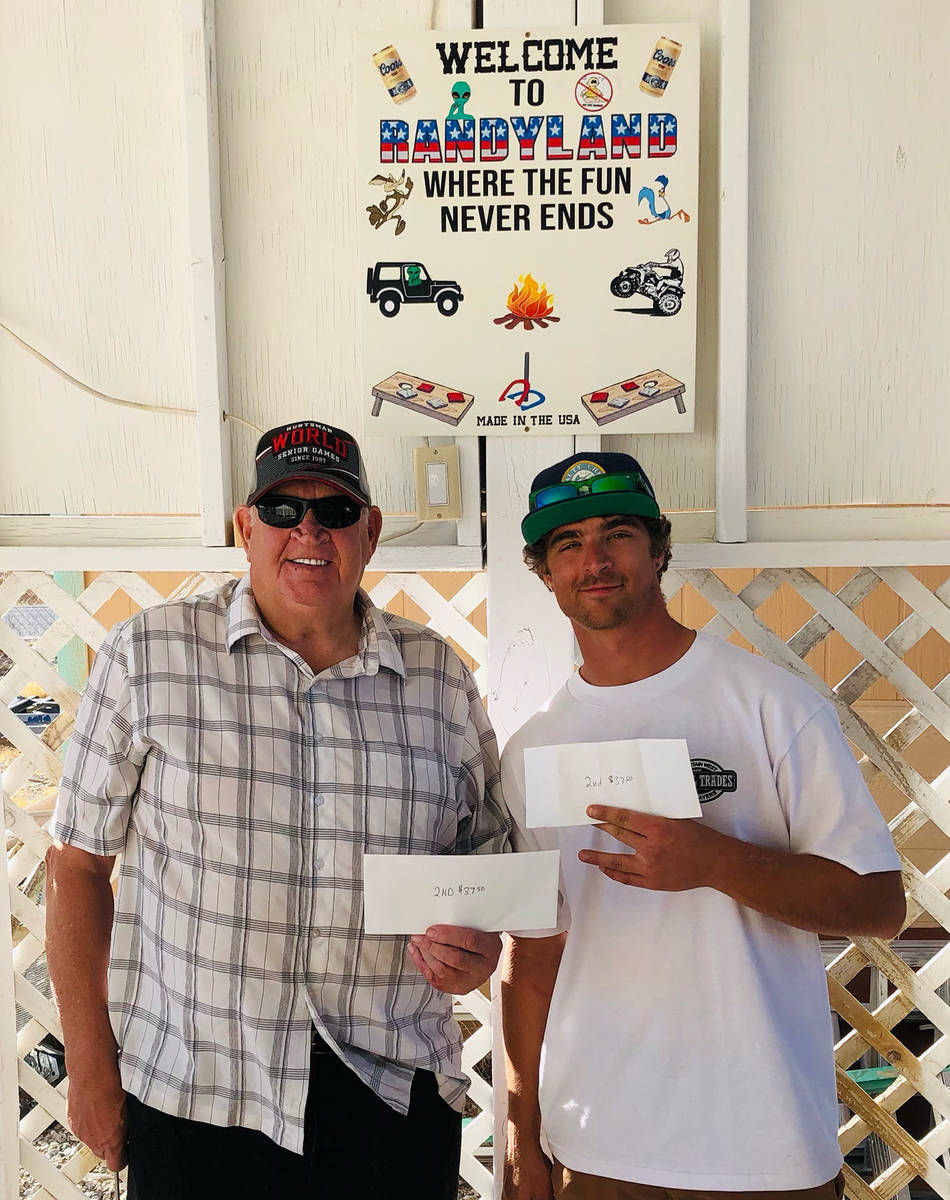 Lathan Dilger/Special to the Pahrump Valley Times Dennis Andersen, left, and Jefferson Counts lost twice to Mike Nicosia and Kasey Dilger but defeated everybody else to claim second place at the Randyland Ringer Roundup doubles horseshoes tournament Jan. 16 in Pahrump. 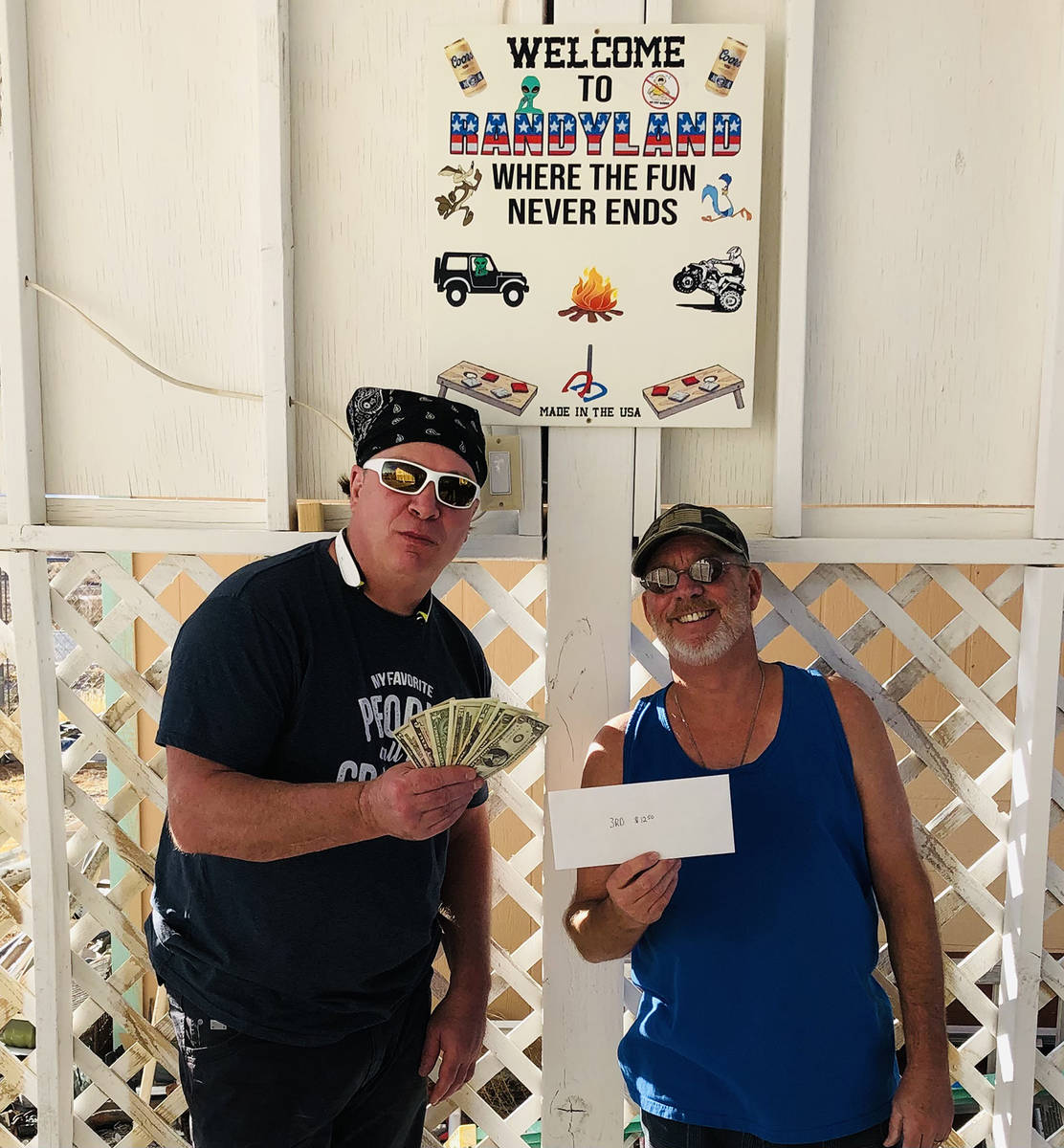 “Randy came to me and said it was going to be very nice weather, so he wanted to put on a horseshoe tournament at his house,” said Lathan Dilger, president of the Southern Nevada Horseshoe Pitchers Association.

Four days later, the yard was host to the latest event in the Backyard Series, the Randyland Ringer Roundup, complete with the usual food and a 50/50 raffle.

“We had three players from Mount Charleston, three from Las Vegas and the rest from Pahrump,” said Dilger, whose son, Kasey, spent his last day in town before heading back to college teaming with Mike Nicosia to capture the tournament championship. The two split the $150 top prize.

Claiming $75 of that pot for finishing second were Dennis Andersen and Jefferson Counts, who reached the final of the main draw before losing to Nicosia and Kasey Dilger, defeated Mark Kaczmarek and Gary Dilger in the loser’s bracket final, then lost again to Nicosia and Kasey Dilger in the final. Kaczmarek and Gary Dilger lost their opening game, then won four in a row to reach the loser’s bracket final. The winners had a tough road as well.

“The first-place winners went undefeated but were down in every game and fought back to win,” Lathan Dilger said of Nicosia and Kasey Dilger, who defeated Salzwimmer and Chuck Smith in their first game, then defeated George Mallory and Steve Dilger before their initial win over Andersen and Counts in the main draw final.

Andersen and Counts split $75 for finishing second, while Kaczmarek and Gary Dilger shared $25 for their third-place finish.

The pairings were made by a draw of cards, ensuring each would have one A player ane one B player. Players are categorized mostly by handicap, but there are exceptions, Dilger said, especially with drop-ins.

Next up for Nevada’s pitchers is a tournament sanctioned by the state association Feb. 6 at Leavitt Park in Las Vegas. Tournaments that were to be held in conjunction with Pahrump Valley Days in February and the Pahrump Balloon Festival in March remain on the schedule for now.

“We held all of our tournaments last year, and not one player got the virus,” Dilger said. Pahrump pitchers participated in tournaments ranging from Tonopah to St. George, Utah, using masks while competing against pitchers from several states.

Dilger said that the tournament slated for Feb. 20-21 could be moved to a different weekend and that a tournament scheduled in conjunction with the Pahrump Balloon Festival in March might be played on temporary pits at Honeysuckle Park, a facility on which Dilger hopes to get permanent pits constructed.

Anyone interested in hosting a tournament in their backyard as part of the series should contact Lathan Dilger at 775-751-4813.