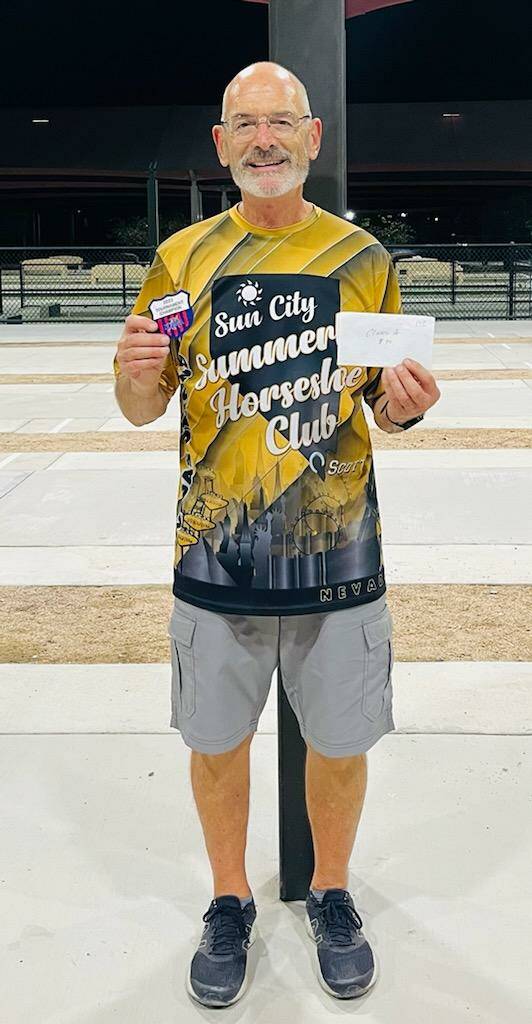 Special to the Pahrump Valley Times Scott Hardy took home first place in the A class at the NSHPA's Sin City Nights tournament in Las Vegas on Saturday, Aug. 13. He was the only pitcher in the tournament to finish with a perfect 5-0 record.

Special to the Pahrump Valley Times Lathan Dilger finished in first place of the B class in the NSHPA's Sin City Nights tournament. He ended the day with a 4.5-1.5 record, getting a must-win in his final game to win the tournament.

The NSHPA held their Sin City Nights tournament at Leavitt Park in Las Vegas this past Saturday. The tournament was a sanctioned, singles event with 13 pitchers participating.

Hardy, who plays in the A class, ended the tournament as the only pitcher of either class to finish with an undefeated record.

Tom Grose had a nail-biting finish to get his second place for the A class. He went into the final matchup of the tournament with a 2-2 record. His opponent: Lawrence Workman.

Workman entered the matchup with Grose with a 3-1 record. Grose would go on to defeat Workman by a score of 24-20, tying them for second place with identical 3-2 records.

Grose won the tiebreaker by having a slightly higher ringer percentage for the tournament. He threw 79 ringers, good for 39.50%.

Because Grose won the tiebreaker, that meant Workman took home third place in the A division.

Workman finished the tournament with 151 total points and threw 62 ringers in his 200 attempts, good for a ringer percentage of 31%.

In the B class, NSHPA president Lathan Dilger took home the win. He finished the tournament with a record of 4.5-1.5.

His lone loss of the tournament came in the opening game with Don Brown. Following that game, Dilger tied Randy Salzwimmer to start the tournament 0.5-1.5.

After those two games, Dilger rattled off four wins in a row to lead him to victory.

Going into the last matchup of the day against Jim Magda, Dilger was trailing by 0.5 game.

Dilger was able to get the win by a score of 32-29, which propelled him into first place. He scored a total of 187 points and threw 71 ringers in his 240 attempts.

Magda, who finished in second place, ended the tournament with a record of 4-2. He scored 199 points and threw 84 ringers along the way.

The third-place finisher for the B division was Mark Kaczmarek.

Kaczmarek ended the day with a 3.5-2.5 record. He, too, found himself in a must-win situation going into the last matchup of the day.

Kaczmarek was able to get a 33-24 victory, leap-frogging Dunn for third place.

Lathan Dilger would like to thank Neil and Char for helping direct the tournament.

The next NSHPA tournament will take place this Saturday, Aug. 20, at Petrack Park in Pahrump.

The Hot August Nights tournament will be a sanctioned singles event beginning at 6 p.m.