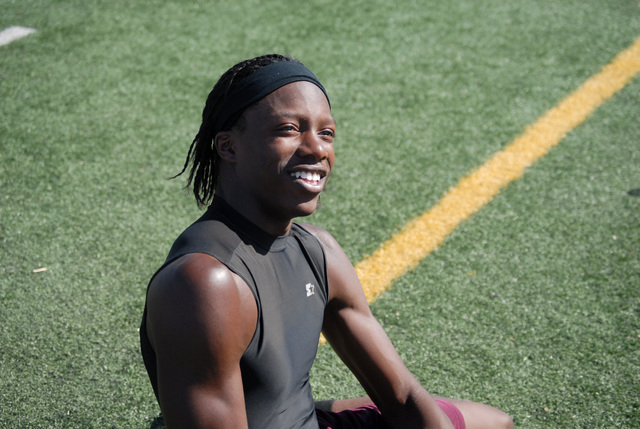 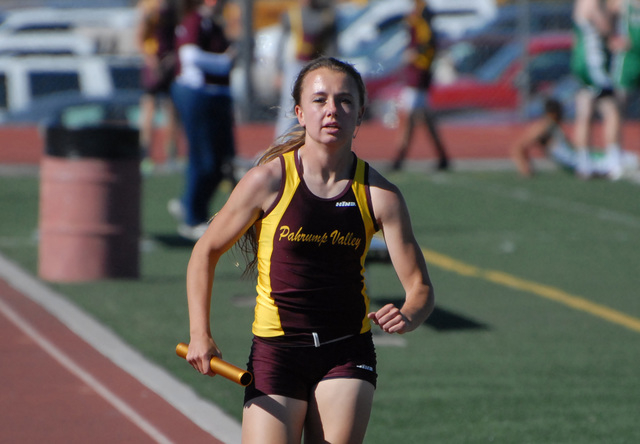 It’s time for the fastest show in Las Vegas, the Southern Nevada Regional track finals at Sunrise Mountain High School. It started on Tuesday and will run through Friday and Saturday.

The Pahrump Valley Trojans track team will be at Sunrise Mountain hoping to qualify for the state finals, the following week.

“We are all set to go,” said Trojans Coach Ed Kirkwood.

Kirkwood said Keenan Harris, who spent the entire season injured with a hamstring pull, is ready.

“He did a good job with the 4×100 relay. I told him to run it at 90 percent and that is about what he did. We ran a pretty good time. It was one of the faster times all year. He asked me, ‘Why 90 percent?’ I told him, ‘Because we want to live to run next week.’ I wanted him to get a whole race under his belt and the handoffs were nice and tight,” he said.

Despite being fully healed, Kirkwood still didn’t want Harris to run the open 100.

“We just want him to qualify for state in the relay,” Kirkwood explained. “I really don’t think he has had enough time to recover. I don’t want him to go out there and get injured again. I told him just to stay with the guys and just test things out. Well, he passed the test. We will cut him loose this week. We have to do well this week to move to the following week.”

Devon Montgomery will be running both hurdle races and the 4×100 and the 4×400-meter relays.

According to Trojans Coach Ed Kirkwood, on the boys side Devon and Nick Nelson are the only boys close to getting an individual state championship. Nelson will be going for the 800-meter run with his best time of 2:02.6. He will be running against Manuel Hernandez of Sunrise Mountain with a 1:58 time, Abdirahman Mohamad of Desert Pines with a 2:01.06 and Colin Deurlington of Tahoe-Truckee with a 2:02.08.

Devon Montgomery will be defending his state title in the 110 hurdles. He is undefeated this year with a 14.66 time. RJ Hubert of Moapa Valley with a 15.14 and teammate Michael Carlson with a 15.31 are the closest to him.

In the 300 hurdles, Devon posted a 41.33 his first time running it last Friday at Boulder City and this puts him in the top 5 in the state. Kamal Counts of Cheyenne has a 40.54.

The Trojan girls did their best in field events at Boulder, but didn’t dominate in them. They scored in the middle in most of these event. Caeli Havel took 4th in shot with a 30-04.00. Andi Bishop in the pole vault took 4th place with a 8-06.00 and Meghan McDermott in the triple took 5th place with a 31-07.50.

According to Kirkwood, sprinter Kelbie Middleton was taking a much needed break. Kirkwood said she has been battling a bug for the past couple of weeks. Middleton normally runs the 100 and the 200-meter runs and has an outside chance of becoming a state champion in the 100 or 200.

Sydney Sladek will definitely defend her 800-meter run state title with everything she has. She will also be running in the 400-meter run and has a good chance of doing well there. Kirkwood feels she is in the top 5 in the state there.

Senior jumper Christina Thompson continued to jump well taking 4th place in the long jump (15-09.50) and 3rd place in the triple jump (31-10.00). She seeks to duplicate Melynda Gross’ feat of being a double state champion as a jumper.