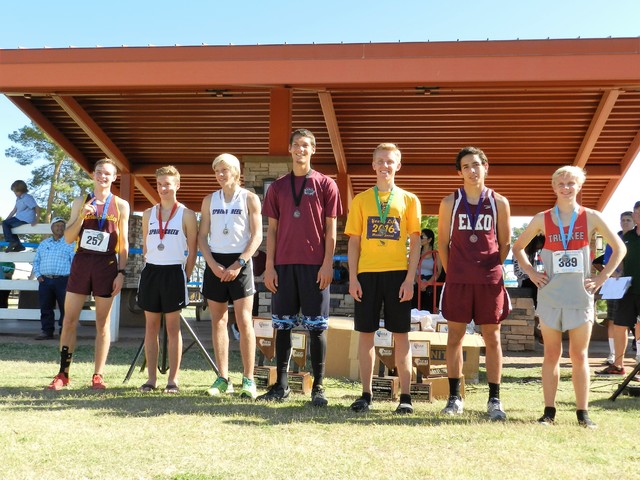 Special to the Pahrump Valley Times Bryce Odegard stands with his first place medal on the far left. The Trojans finished fifth as a team. 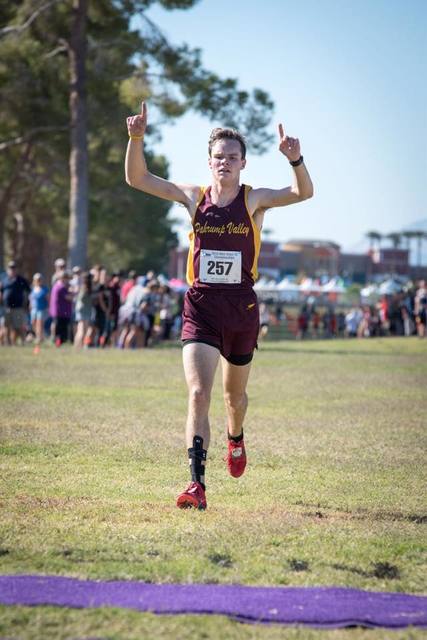 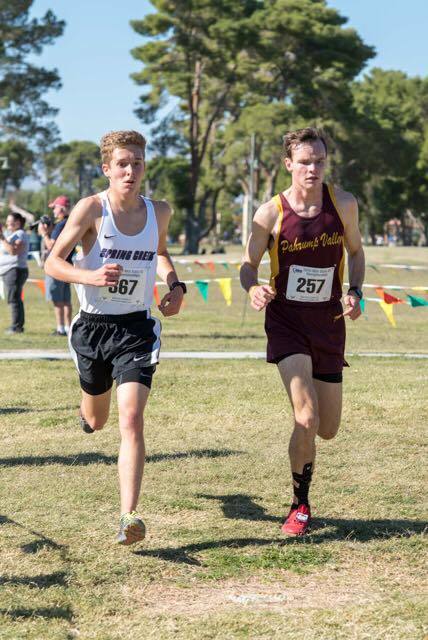 Special to the Pahrump Valley Times Trojans runner Bryce Odegard ran neck and neck with William Fallini-Haas of Spring Creek until the last 800 meters of the race and then Odegard kicked it in and beat his Spring Creek opponent. 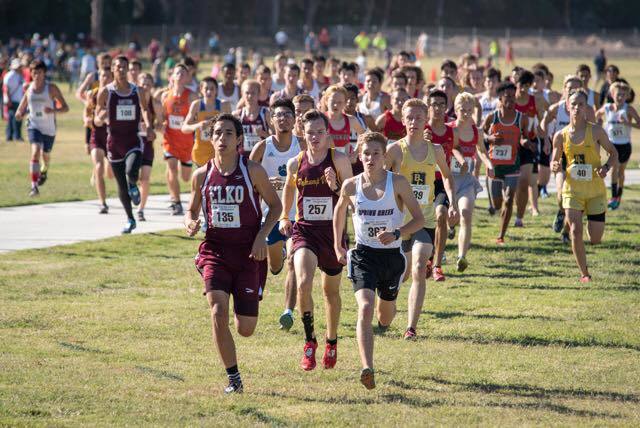 Special to the Pahrump Valley Times The start of the race shows Trojans runner Bryce Odegard clearly in third place behind William Fallini-Haas of Spring Creek and one other runner. Odegard said he ran his fastest first mile of the season in 4:50.

The first mile at the state meet last Saturday was his fastest mile of the season for Trojans cross-country runner Bryce Odegard. It was too fast, and he knew he had to keep something in reserve. In the last 1,000 meters of the race he saw his opponent, William Fallini-Haas of Spring Creek, was breathing harder but so was he. He fell back a little and then he heard his uncle off to the side telling him, “to go.”

At 800 meters Odegard pulled away from Fallini-Haas and it was all over. He won state with his fastest time of the season, 15 minutes, 56 seconds out of 58 runners.

“All year long my coaches and my dad have been telling me that I have been coming out too strong,” Odegard said. “It was just a fast course and I didn’t mean to come out strong. My opponent wasn’t used to the fast start. This was his first state meet and I think I tired him out. At 800 meters when he slowed down, I took off.”

His coach, Trojans coach Matt Kolodzieczyk watched him pull away at the end.

“With just 800 meters left in the race, Bryce was right on his hip,” Kolodzieczyk said. “When Bryce pulled away, I could tell the other guy was done. Odegard probably took him out of his comfort zone.”

It was Odegard’s first 3A Nevada cross-country state title, and he was the first boy to win a state cross-country title for the Trojans.

This was Odegard’s third appearance in the state meet. He finished in fourth place in both meets. Last year he ran a 17:34 at San Rafael Park in Reno and the year before he ran a 16:56.1 at Sunset Park in Las Vegas.

Spring Creek’s Fallini-Hass was hot on his heels for second place (16:11) and Cole Campbell, also from Spring Creek, took third.

In the team competition, Spring Creek took first with 38 points out of seven teams, Elko was second (68), Tech was third (81), Truckee fourth (81) and Pahrump Valley was fifth (107). Last year was the first time under Kolodzieczyk that team had gone to state, finishing in sixth place. Before that, the team’s last appearance at state was in 2002. The Trojans have never won a state meet as a team.

“This was a great race for us as a team, but Mike Sonerholm ran great for us and had his best finish of the year,” Kolodzieczyk said. “I am proud of all the runners that ran at state.”

Next year for the boys, Kolodzieczyk said his goal will remain the same, to go to state as a team.

“Having Bryce on the team has made them faster (the boys team),” Kolodzieczyk said. “He pushes them.”

Odegard said since the first race the team all got faster and improved with every race.

“Mike (Sonerholm) and Grant (Odegard) started at about 21 and have come down to 18 and Layron was about 19 and is about 17. He had sprained his ankle during the season, so this has slowed him down.”

Bryce Odegard was confident that the team will be faster next year.

Two Trojans girls ran as individuals. Diamond Sonerholm finished in 39th place out of 58 runners (22:22) and Grace Plumb finished in 43rd place (22:47). For both girls, this was their first state appearance.

The coach said he was pleasantly surprised to have two girls go to state this year.

“For both girls this was their first year running in cross-country,” the coach said. “The last time we had a girl go to state it was just one and that was Stefanie Thelaner in 2013. Now for two girls to get experience going to state will help us out next year.”

The last individual state title for the Trojans was won by Makenzie Dean in 2007. Dean is currently a sixth-grade math teacher at Rosemary Clarke Middle School. The girls team has never won a team state title.