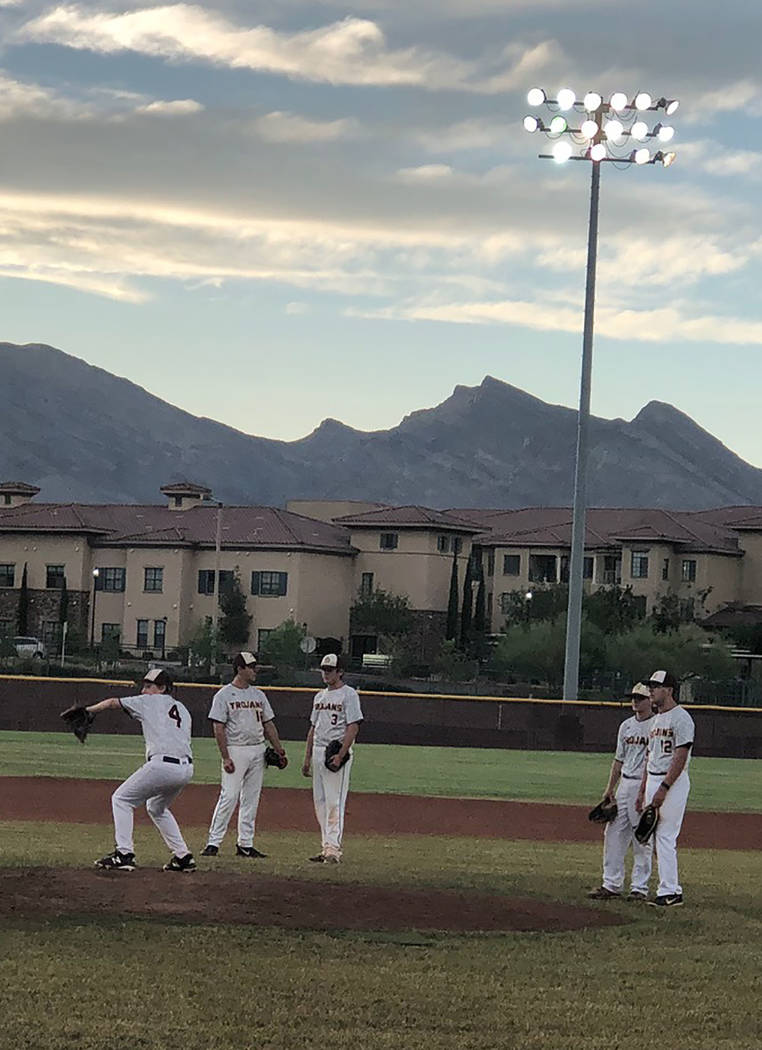 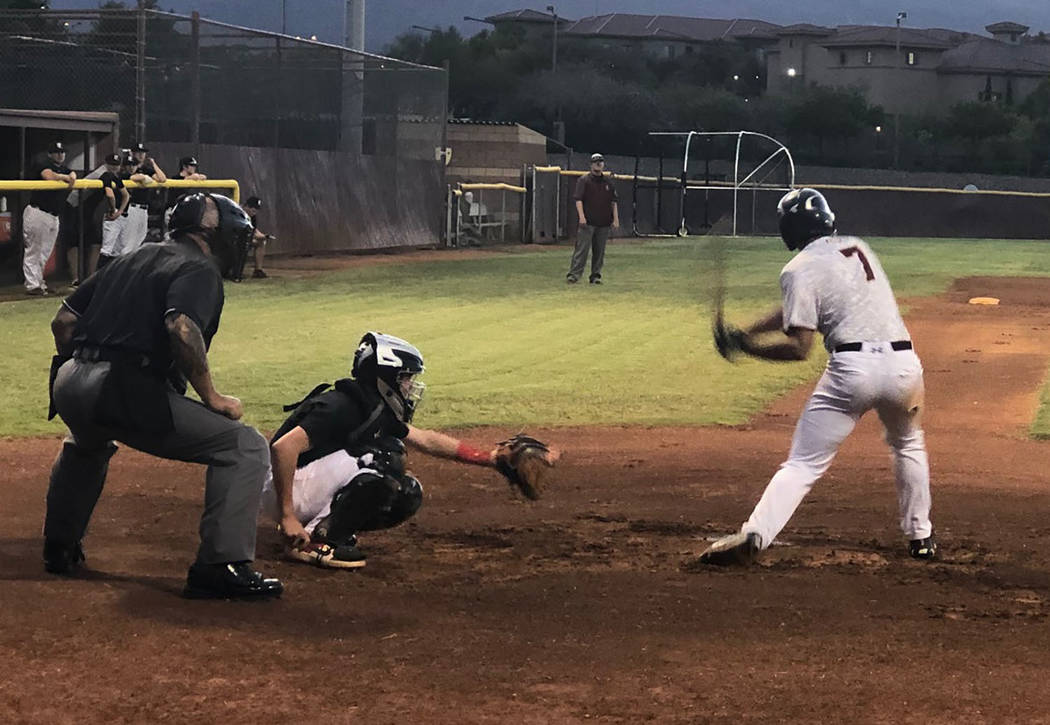 Tom Rysinski/Pahrump Valley Times Pahrump's Jalen Denton (7) went 2-for-3 with a solo home run during the first game of Friday night's doubleheader against Faith Lutheran in Las Vegas. The Trojans lost both games, 4-2 and 6-1. 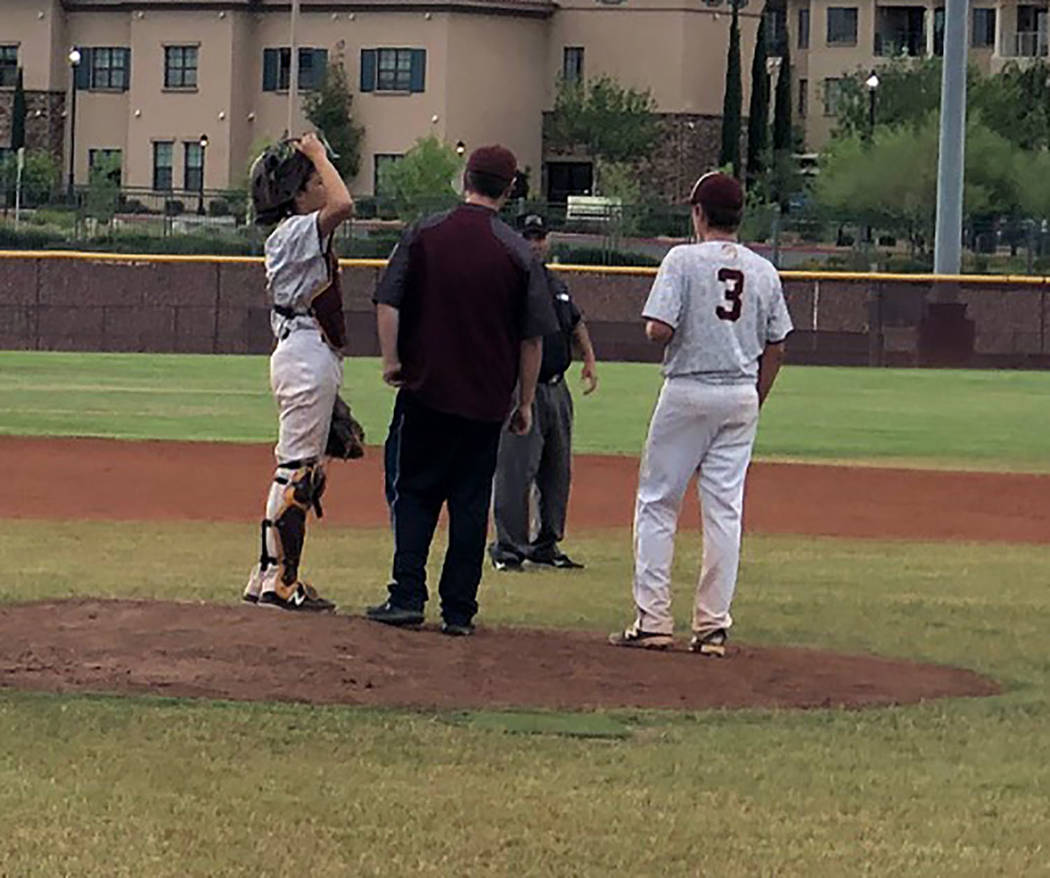 Tom Rysinski/Pahrump Valley Times Pahrump catcher Coby Tillery, coach Drew Middleton and pitcher Jake Riding confer on the mound during the fifth inning of the Trojans' 4-2 loss to Faith Lutheran in the first game of a Friday night doubleheader in Las Vegas.

It would be logical to assume that a baseball team made up of players under 18 would include many players on the high school varsity. But this summer, Pahrump’s 18U Connie Mack team takes that one step further.

“This is pretty much the whole team other than one guy who didn’t play,” Pahrump coach Brian Hayes said. “This is our group. We’re kind of excited because this is the first time since I’ve been coaching here that we have our entire returning team playing, other than one guy.

“This is the first year we’re playing 18U. We’re probably a little too young to play 18U, but I think it’s good for them. It puts a little pressure on them, and Boulder’s playing there, so we felt like we need to be at that same level. We’re excited that they’re all out here.”

After opening the season with two wins, the Trojans dropped three consecutive games, including a doubleheader Friday night at Faith Lutheran High School in Las Vegas, as the Crusaders swept the Trojans 4-2 and 6-1.

“We have to play a little better than we did today, but when you’re down four guys, and probably our top four guys, it makes it a little tough,” said Hayes.

One problem you have rarely in summer ball that you don’t have during the high school season is players going out of town. So the Trojans brought up three players from the 14U Connie Mack team to fill in some gaps.

The offense simply wasn’t there against Faith Lutheran, with five hits in the opener — including two apiece by Jalen Denton and Jake Riding — and just two in the nightcap. The pitching wasn’t bad, especially in the opener, with Riding striking out eight while pitching into the sixth inning.

“He locates pretty well,” Hayes said of Riding, who got several called strike threes, mostly at the knees. “He keeps the ball down, mixes up his curve ball and does a pretty good job throwing strikes for us. We just hope it continues, because we expect him to be one of our top guys next year. So this is a good opportunity for him to see a little better offense and see how he works around that.”

But the “freebies” Hayes hates so much hurt, as two of the players who scored for the Crusaders reached base after being hit by a pitch. But before then, Pahrump got off to a good start thanks to Denton and Riding.

Riding, who was far more valuable as a pitcher than a hitter during the high school season, led off the second inning by pulling a double to left field. He moved to third on a single by Angel Rodriguez and scored on a double steal attempt when the Crusaders chose to through to second, nailing Rodriguez but allowing Riding to score the Trojans’ first run.

Denton, who hit .462 with 14 extra-base hits for the 26-10 high school team, belted a one-out home run to right-center field in the third to give the Trojans a 2-1 lead, but they would not score again.

The Trojans took a 1-0 lead in the second game as Zack Cuellar reached on an error, moved to second on a walk, took third on a single by Sterling Oshiro and scored on a wild pitch. But that was all the offense Pahrump could muster, as Trojan hitters struck out 11 times against two Faith Lutheran pitchers.

The team rebounded Saturday night with a 2-1 home win over SLAM Academy to even its record at 3-3, tied for second behind the 4-1 Crusaders in the 18U American going into a Tuesday game against the Southern Nevada Falcons. Hayes has told his players he thinks they can reach the playoffs, although that is only one of the goals for the summer.

Hayes, who told his players after Friday’s games that they write the lineup, not him, thinks the summer league offers players a chance to step up and show what they can do going into the next high school season, when the Trojans will be looking to return to the state tournament.

“We’re hoping by the end of the summer we know who’s where,” Hayes said. “We told the kids we hope we’re retooling rather than rebuilding, and I think we are.”

The Trojans will play Thursday at Green Valley and next Tuesday against Las Vegas and will not be back home until Friday, June 21, against El Dorado.