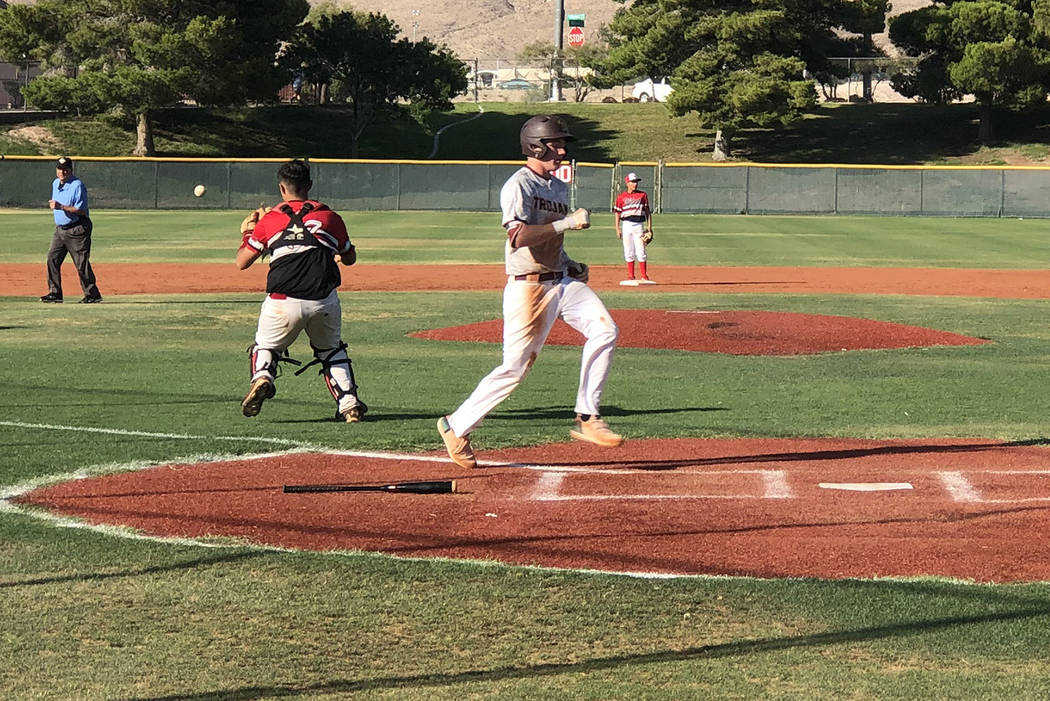 Tom Rysinski/Pahrump Valley Times Pahrump's Chase McDaniel scores on a sacrifice fly by Jake Riding during the fourth inning Tuesday night against the Las Vegas Cats at Las Vegas High School. McDaniel went 2-for-2 with a walk and 3 runs scored during the Trojans' 12-0 win. 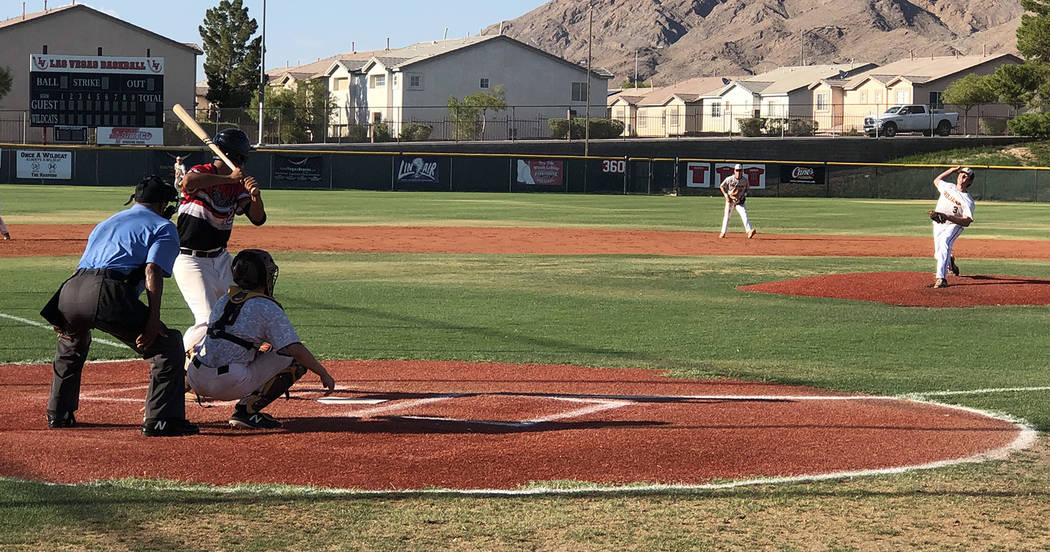 “He ended the high school season really strong, and then summer he’s been coming out here and doing the job,” said Middleton, the Pahrump Valley High School pitching coach who is coaching Pahrump’s 18U team in Connie Mack baseball. “He’s been great.”

The latest example of that came Tuesday night at Las Vegas High School, when Riding tamed the Las Vegas Cats over six shutout innings, allowing just three hits as the Trojans pulled away late for a 12-0 win.

Riding had the Cats frustrated as they repeatedly sent weak pop-ups the other way and fouled off pitch after pitch in the same direction. Two first-inning batters made solid contact, sending the ball deep to center field, but after that he cruised. He also did not walk a batter.

“Jake was really good today,” Middleton said. “He got ahead of the hitters and just attacked. He settled down and hit his spots.

“His last two outings have been really good. He’s been lights out.”

Hitting his spots is encouraging for Riding, who said that was something he needed to work on this summer.

“Locating off-speed,” he said was his task. “I’ve been having trouble with that for a long time. Overall, I’m doing good. I haven’t really pitched a bad game yet.”

Riding said there was no special secret to making the Cats hit weak fly balls the opposite way over and over.

“Just keeping it outside,” he said, noting that was not his usual routine. “I just kept it outside, and they kept lunging for it.”

Nine of the 18 outs Riding recorded were pop-ups to either first or second base, giving Jalen Denton and Kyle McDaniel easy play after easy play.

For much of the game, it looked as if Riding would have to be that good, as the Trojans were doing little at the plate. They got on the board in the second when Coby Tillery reached on an infield single and took second when the throw from shortstop went out of play. He moved to third on a ground ball and scored on a wild pitch.

Pahrump doubled the lead in the fourth. Chase McDaniel beat out an infield single on a ball the second baseman did not charge, stole second, moved to third on a wild pitch, and, after two walks, scored on a sacrifice fly by Riding.

It wasn’t much production after the Trojans had the bases loaded with nobody out.

And with Riding inducing pop-ups and ground balls, the defense had plenty of chances and performed very well. Aside from a misplayed ball in the outfield, the Trojans were mistake-free defensively until the bottom of the seventh, and by then the Cats’ generosity had made the game a rout.

Clinging to a 2-0 lead going into the sixth, Pahrump batted around in each of the final two innings. Four walks in the sixth and two walks and two hit batters in the seventh made it easier, but there also were a double by McDaniel, an RBI double by Riding, RBI singles from Zack Cuellar and Ryan Braithwaite and a 2-run single by Denton.

The win puts Pahrump at 5-4 in the 18U American Division, while the Cats are 4-4 in the National. It was the second consecutive win for the Trojans, and, as Middleton noted, the team is very young, with an all-sophomore outfield and an eighth-grader in Kyle McDaniel at second base.

“The great thing about this group of kids is that they’ve played a lot of baseball together,” Middleton said. “A lot of them were on the (Little League) all-star team last year. It’s going to really help next high school season.”