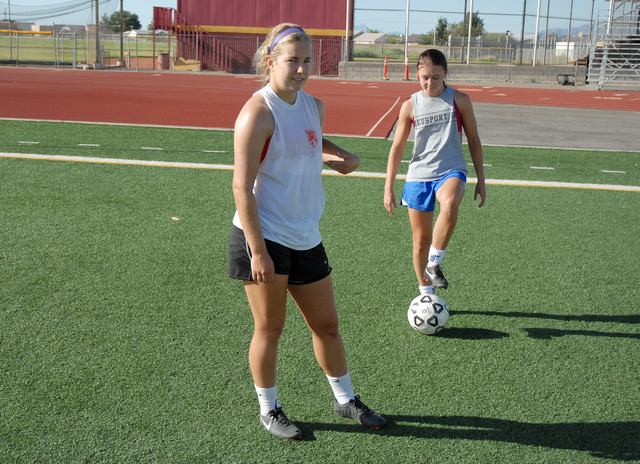 Players 96 girls soccer club 18 and under is coached by Joe Sladek and they won the 2014 U.S. Youth Soccer Region IV Championship tournament, which included 13 Western states. They will be at the nationals in Germantown, Maryland on July 22-27.

The girls will play six teams at the nationals. There are four regions, so there will be four teams plus two other teams, which qualified as wild cards.

The team is based in Las Vegas but has 8 Pahrump girls on the team. The following are the Pahrump members: Jennifer McCaw, Sydney Sladek, Paige Chaffee, Kristen Young-Chaffee, Ashlyn DiBlasi, Lexi Smith, Alyssa Turner and Brittany Klenczar. Only six of the eight girls will travel back East for the tourney. The six that will be attending from Pahrump are Sydney Sladek, Alyssa Turner, Brittany Klenczar, Lexi Smith, Kristin Young and Paige Chaffee.

Joe has them training almost every day now for the tournament. The team meets in Pahrump in the early hours of the day when it is cool.

“We are now training for the nationals three times a week in Las Vegas and they are working out here 3-5 times a week,” Joe explained. “The team will be up against some of the best teams in the country, but we are one of those teams. If they play like they did at regionals, they will do well. There we played two or three teams from southern California, a state champ from Washington, a state champ from Colorado, and a state champ from California and some powerful regional teams. They were all good.”

Joe said he and his team will find out who they are playing sometime this week.

Sydney said she expects to play teams better than what they faced at regionals.

“We will play definitely the best of the best. Probably all these girls will be playing college ball. These teams were tougher than the teams we played for in the Nevada State Championship, but the feeling you get for winning for your school is different than winning for your club team. There are different levels of satisfaction,” she said.

Jennifer McCaw got her team to nationals, but will have to report to her college team in Idaho that same week and so will not make the trip back East with her teammates. She said she enjoyed the level of competition in the regional tourney and will miss playing for her team.

“The competition was comparable to college level of play. I am focusing on getting in shape and getting my speed up to be faster and more agile. I am pretty close to the best shape I have ever been in. I have been working really hard,” Jennifer said.

Brittany Klenczar agreed with her two teammates on the level of play at the regional tournament.

“It was so fast-paced. All the girls are extremely good and they know where they need to be. Your positioning has to be perfect. The fact that we won was really cool. It was a once in a lifetime experience. A lot of people don’t even go to nationals, So I am honored to even go,” she remarked.

Alyssa Turner said her team had to step up their level of play.

“We had a hard time adjusting to the climate and how fast-paced it was,” Alyssa said. “We were not even expecting the level of play so we stepped it up and matched it and then won.”