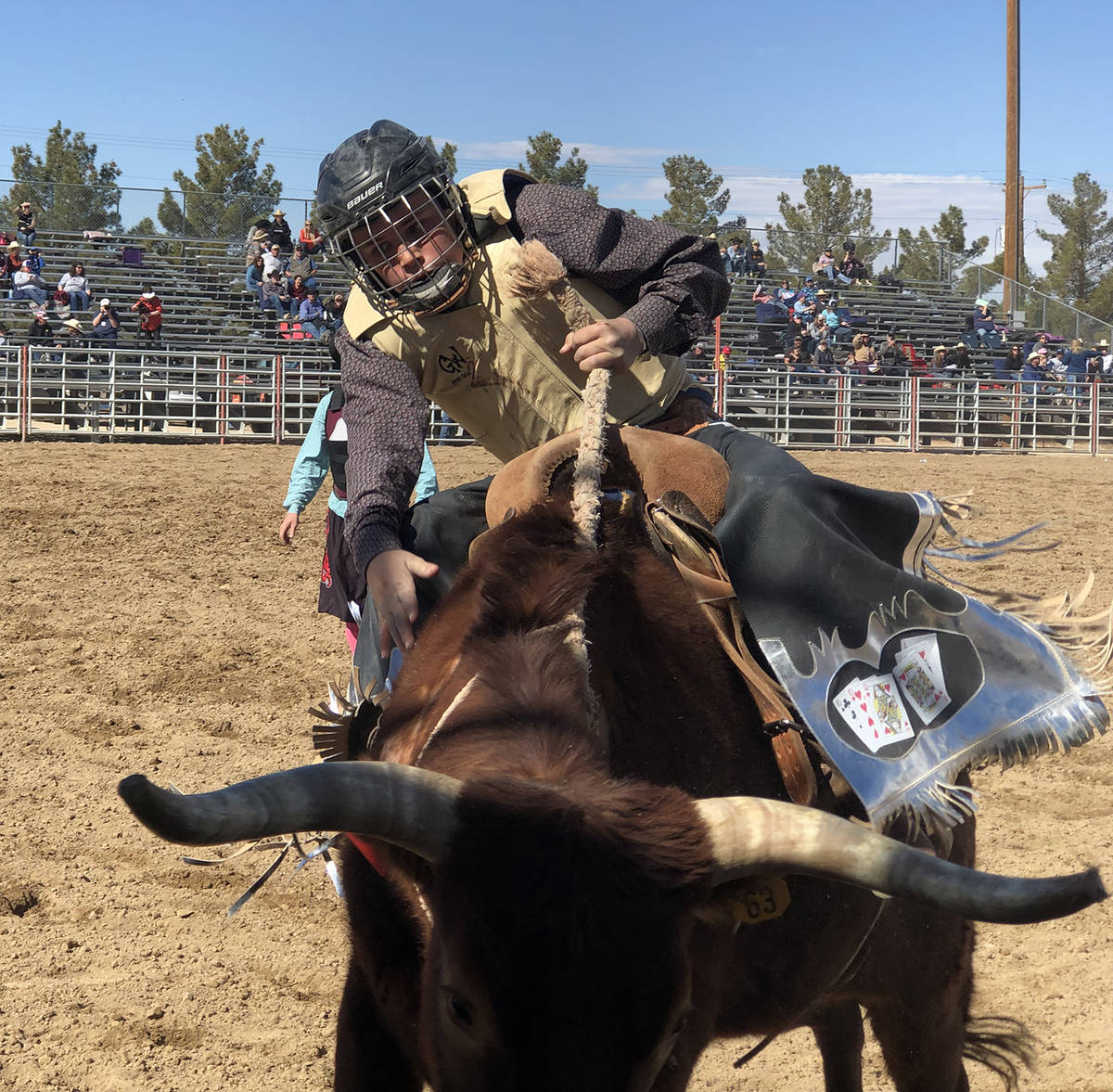 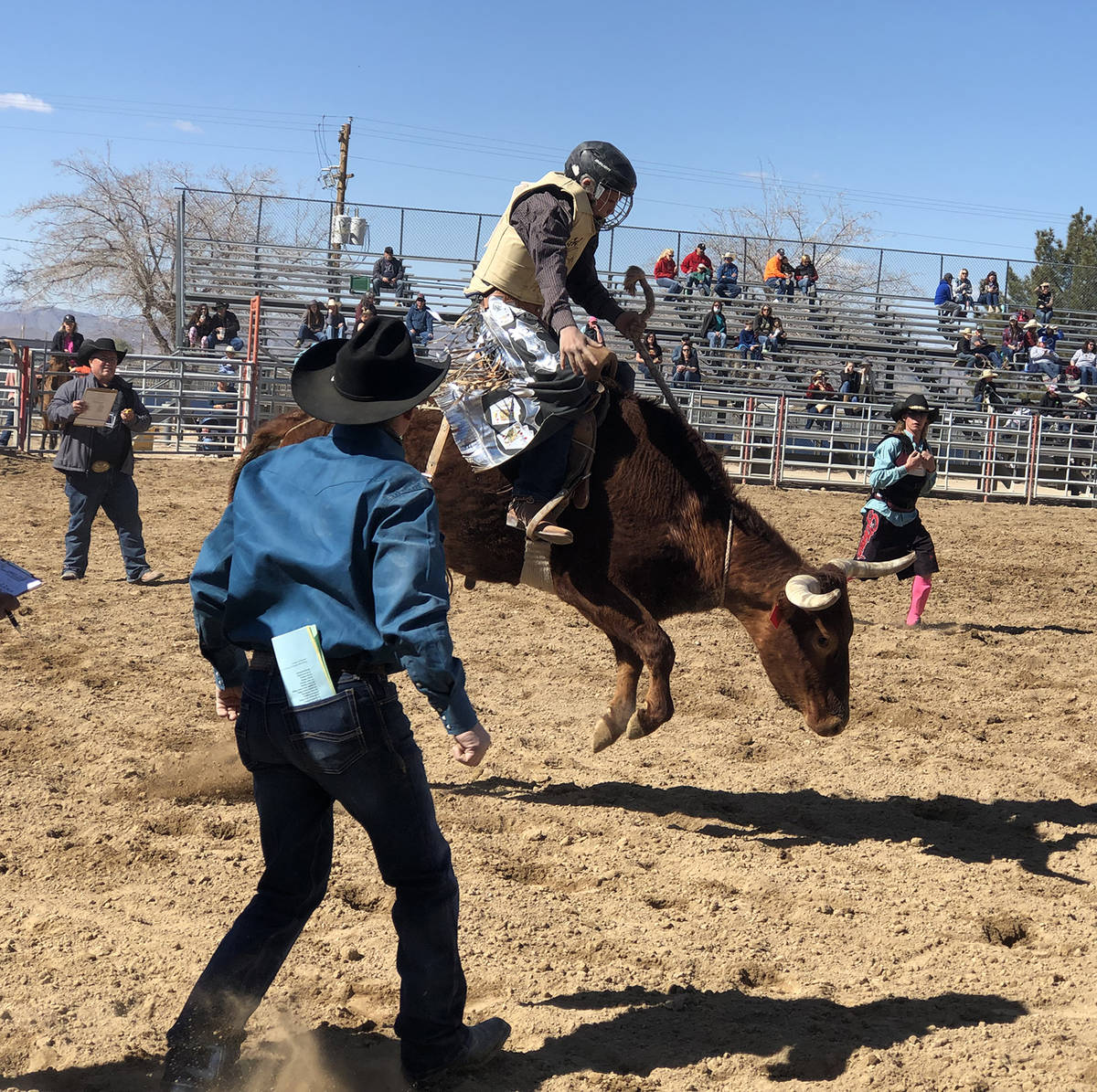 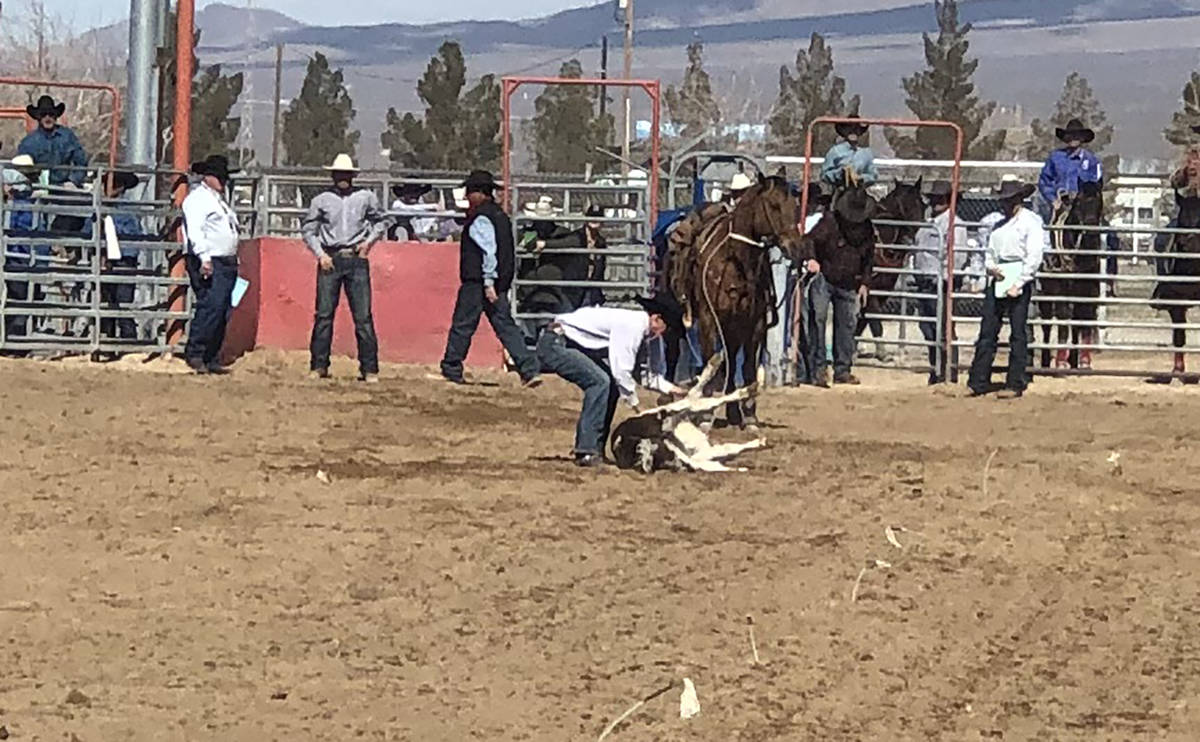 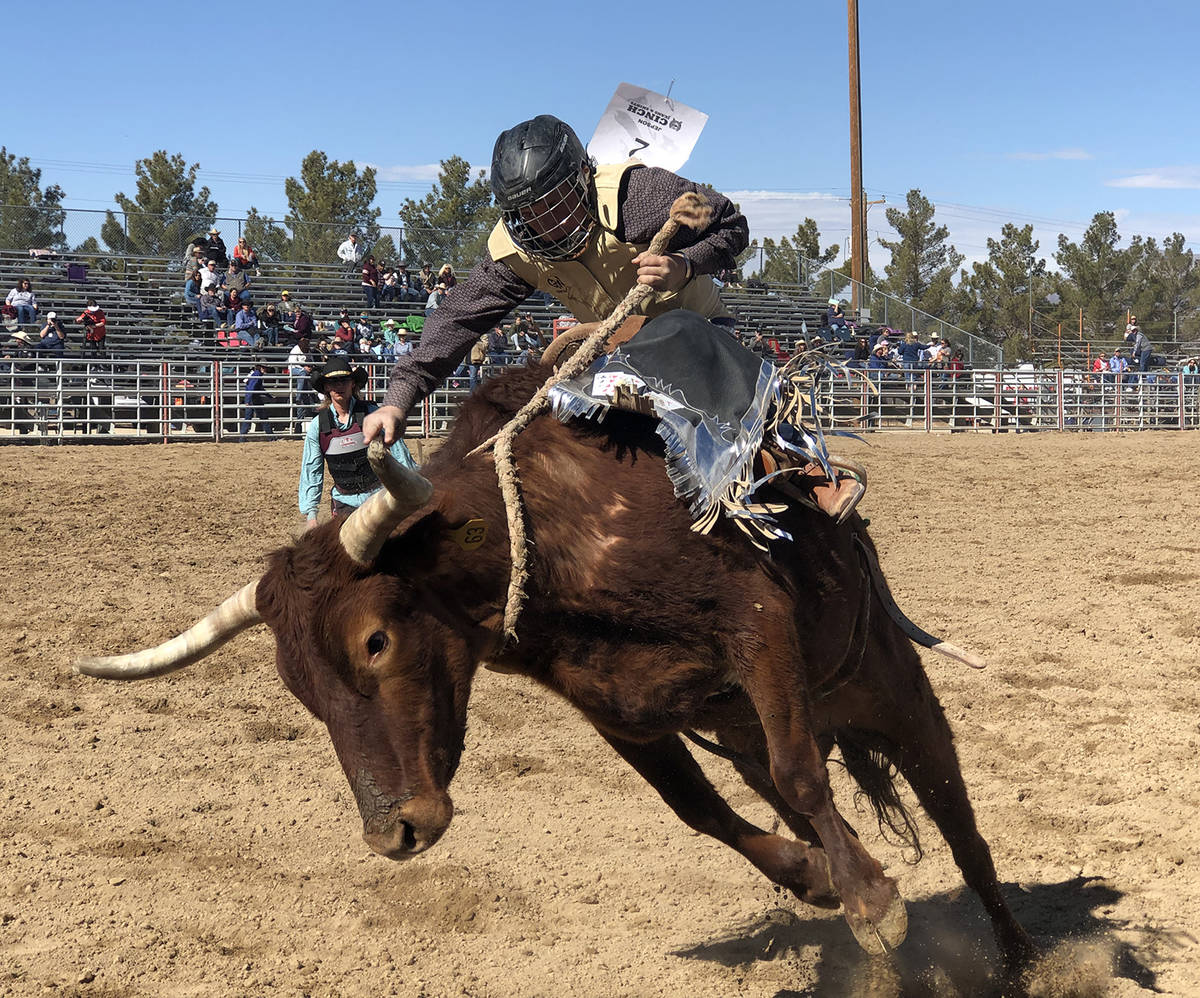 He accepted the hugs, pats on the back and the praise, then found a spot to recharge his young batteries for the rest of a very busy day, which he outlined as calmly as an office worker listing what was needed for the staff meeting that morning.

“I’ve got to go get on my horse and go team rope; me and my partner are doing that,” the Pahrump seventh-grader said. “Then I’ve got breakaway, then ribbon robe — I’ve got to go grab a calf — and then that would be it for today.”

“Today” was the first day of the two-day Nevada State High School Rodeo Association’s rodeo hosted by the Pahrump Valley High School Rodeo Club on Feb. 20 at McCullough Arena, and Jepson did a little bit of everything and did it successfully.

Pahrump’s Brandon Mountz specializes in bull riding, and he had another strong effort at his hometown rodeo. Of the seven junior high school cowboys entered, Mountz was one of only two who scored points twice, earning 9.0 on his first go and 10.0 on his second. He finished one point behind state leader Eyer Morrison of Wells and 12 ahead of third-place C.J. Christian of Alamo.

The effort kept Mountz in third place in the state standings with 92.50 points. Morrison leads with 130.

Garrett Jepson had strong showings in his high school events, winning the tie-down roping competition and teaming with Joseyray Funk of Douglas-Carson to place 10th in team roping, an event in which they lead the state.

In tie-down roping, Jepson earned 10 points with a time of 12.970 on his first go and eight points in 13.410 on his second, with his 28 points giving him 128 for the season. That places him just two behind three cowboys tied for first: Trevor Carter of Alamo, Daunte Ceresola of Fernley and Riley Roderick of Wells.

“I think all of them did well,” said Buddy Krebs, director of the Pahrump Valley High School Rodeo Club. As the host, Krebs didn’t have much of a chance to see the hometown kids compete. “I didn’t have time to watch them all. I was busy working. But they all did a good job.”

The younger Jepson was the busiest of the Pahrump entrants, and things only got better as the weekend went along. Despite the congratulations after his first effort in saddle bronc steer riding, Jepson did not score then or on his second go.

“You’re supposed to keep your feet up and your shoulders when you come out of the gate, and I just dropped my feet … so that’s a no-score,” he explained. “It’s not what I wanted, but I got it in. That’s all that matters.”

Jepson sits second in the state in the event with 85 points, closer to first-place Morrison (130) than third-place Jace Harry (25) of Fernley.

In team roping, Jepson and Borkman scored 10 points on each go, posting times of 14.240 and 6.730 and finishing with 30 points overall, six clear of the field. The pair lead the state with 130 points, Eyer and Olen Morrison of Wells sit at 117.

Jepson earned second place in boys breakaway with times of 5.220 and 3.850, the latter the third best time of the day. He totaled 26 points, just one behind Fallon’s Wyatt Peek, to give him 130 for the season. Jepson shares first place overall with Cade Steward of Alamo and Kade McKnight of Fernley, just 1.50 ahead of Eli Lancaster of Battle Mountain.

Jepson also took second in ribbon roping, teaming with Ellie Webber of Alamo to score eight points on each go on times of 14.140 and 13.450. The 25 points each earned trailed only Elko County’s Kylie Velasco, who netted 30. Jepson is seventh in the state in that event.

Krebs said the rodeo drew a record turnout of contestants, although he said the cancellation of Pahrump Valley Days most likely hurt attendance. Still, the weekend event was a positive for the town, he said.

“I’m sure it had to help the Pahrump businesses,” he said. “You’ve got something with 150 kids entered and have their parents with them and siblings. There were probably 500 to 600 people here and all of them eating, getting gas here and everything else.”

Next up for the rodeo club is a March 12-14 trip to Fernley. That will be followed by rodeos hosted by the Alamo, Spanish Springs, White Pine and Humboldt clubs.