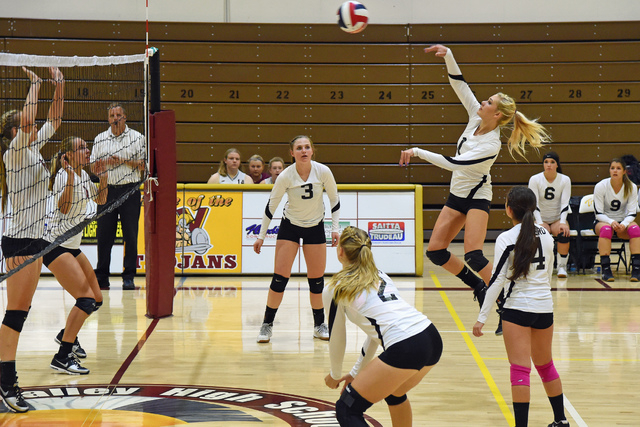 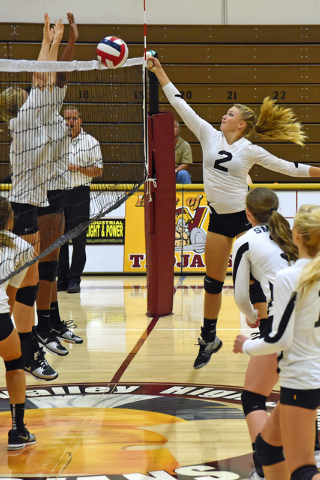 The Lady Trojans volleyball team put up a good fight Tuesday but was overpowered by league-leading Faith Lutheran, 25-19, 25-13, 25-16.

Pahrump spent much of the game on the defensive with blockers Shayla Dance, Jill Smith and Andi Bishop able to block a few hard hit shots, but not enough to make a difference. The Pahrump girls moved well, but Faith managed to find holes in their defense.

“Their girls are really good at placing the ball,” Harris said. “It was a good game. There were a lot of good things that happened and we didn’t just roll over and die.”

Harris said the precise placement of Faith kept Pahrump off balance and kept their offense from mounting a good attack. She also felt her team really only had a few problems during the game.

“In all three games, there was only one rotation that struggled for our team,” she said. “We will have to work on that one rotation.”

Harris had said in the past that if her team was to be competitive it had to eliminate serving errors. She feels her team is doing that now.

Another positive for the team is the hard hitting of Dance. In the beginning of the season Dance was over-shooting the court. Practice and hard work has brought the hits into the court.

“She is getting them down. It has taken awhile. During the second part of the season I think we will be all right,” she said.

“They are coming around. We have to play Sierra Vista, another hard team. The first time we played them we were a different team. The team was not ready to play them and on Wednesday they will be,” Harris said.

Harris said she is confident her team can capture the fourth spot in the Sunset League. She feels once that happens her team will do well in the playoffs. She believes the Sunset League teams are better this year than the Sunrise teams.

At the moment the Trojans are tied for fourth with Cheyenne behind Spring Valley (7-3, 5-2) in third, Sierra Vista in second and Faith in first. The next game is at home against Spring Valley at 6 p.m on Tuesday.

“Things went terrible. This was a loss to a team we should have easily beaten,” he said.

The coach said Dalia Mejia did an outstanding job in the third game as setter and by serving the last 9 winning points.

With the loss the Hornets (4-2, 2-2) find themselves in seventh place. The team needs to finish in sixth place to make it to regionals. The Hornets will be at home for homecoming on Friday at 7 p.m against Round Mountain.

Muckers Coach Chuck Fox said his team came alive in the second game after losing a close one.

“We had three great games where the girls played Muckers volleyball like they are capable of,” the Lady Muckers coach said proudly. “I love how well they play as a team, and how they support one another when they are playing well …”

Sandy Valley (8-0, 5-0) is on top of the league with the Muckers hanging on in fifth place.

Alba Amoros contributed to this article.