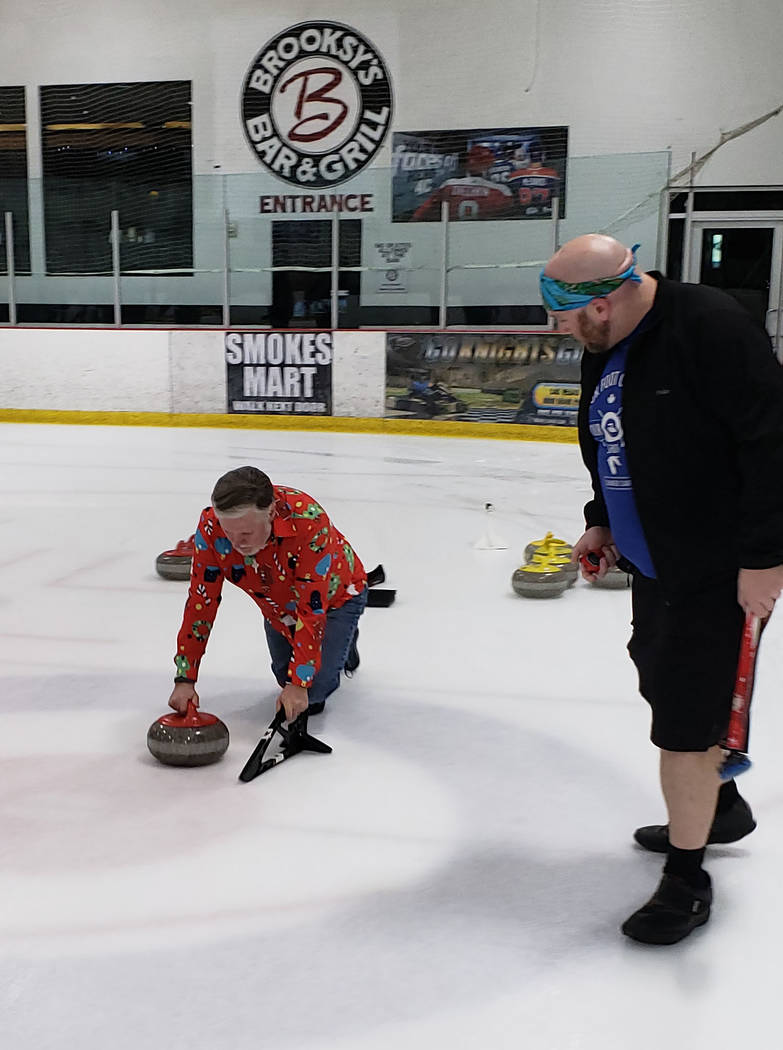 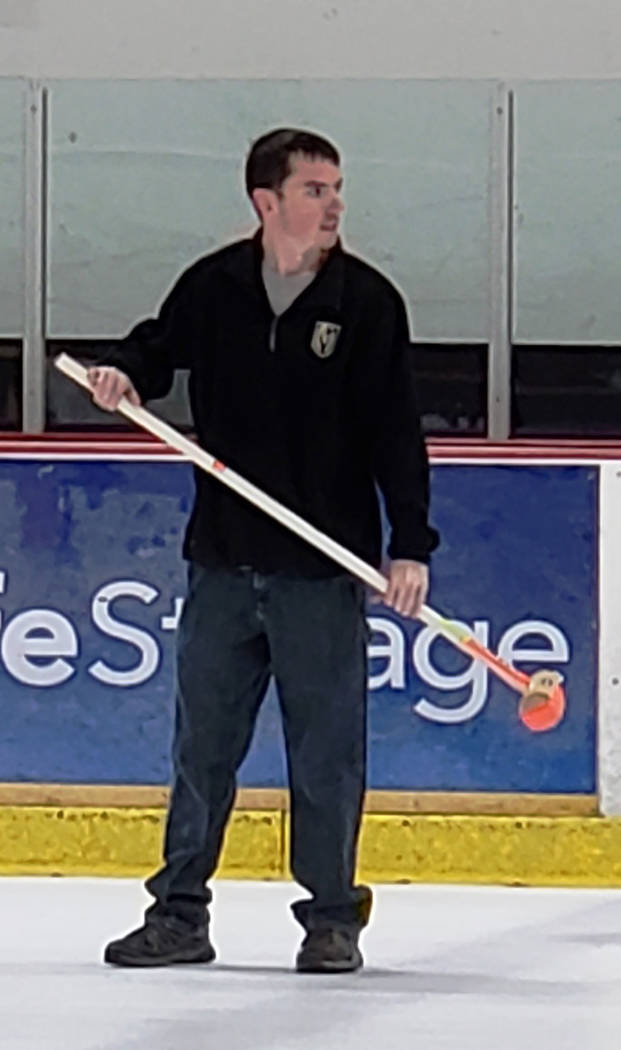 Karen Duryea/Special to the Pahrump Valley Times Matt Duryea of Pahrump has his broom ready at the Las Vegas Ice Center during the Las Vegas Curling Club's recreational league play. 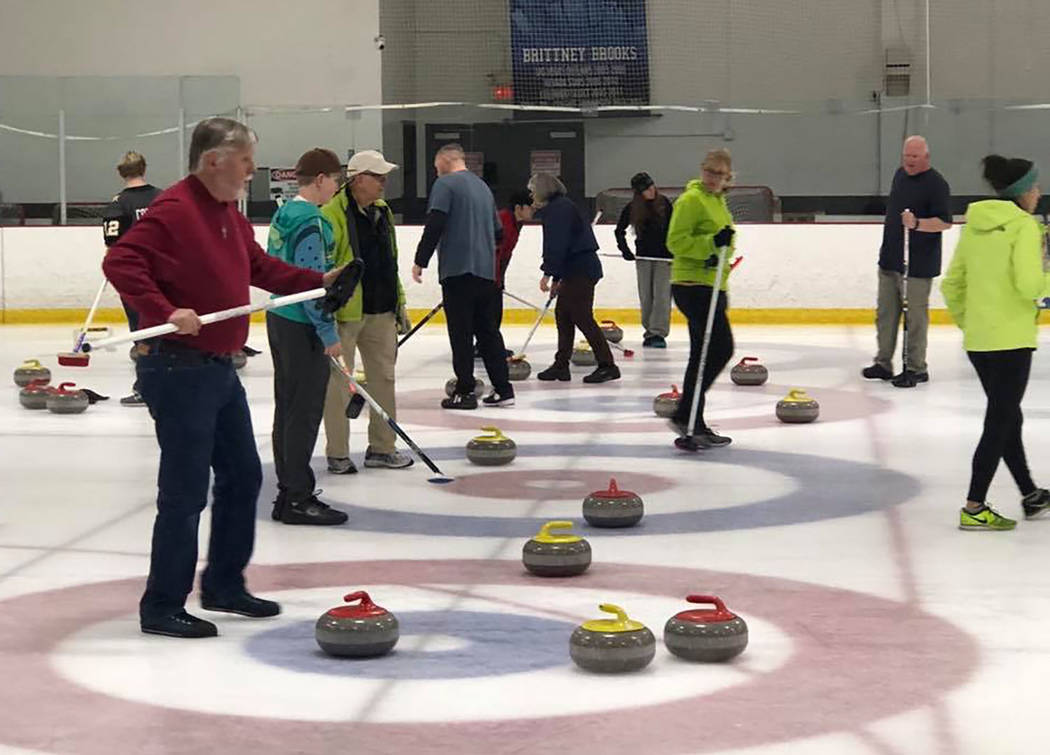 Karen Duryea/Special to the Pahrump Valley Times Members of the Las Vegas Curling Club gather on some of the five sheets available for recreational league play at the Las Vegas Ice Center. 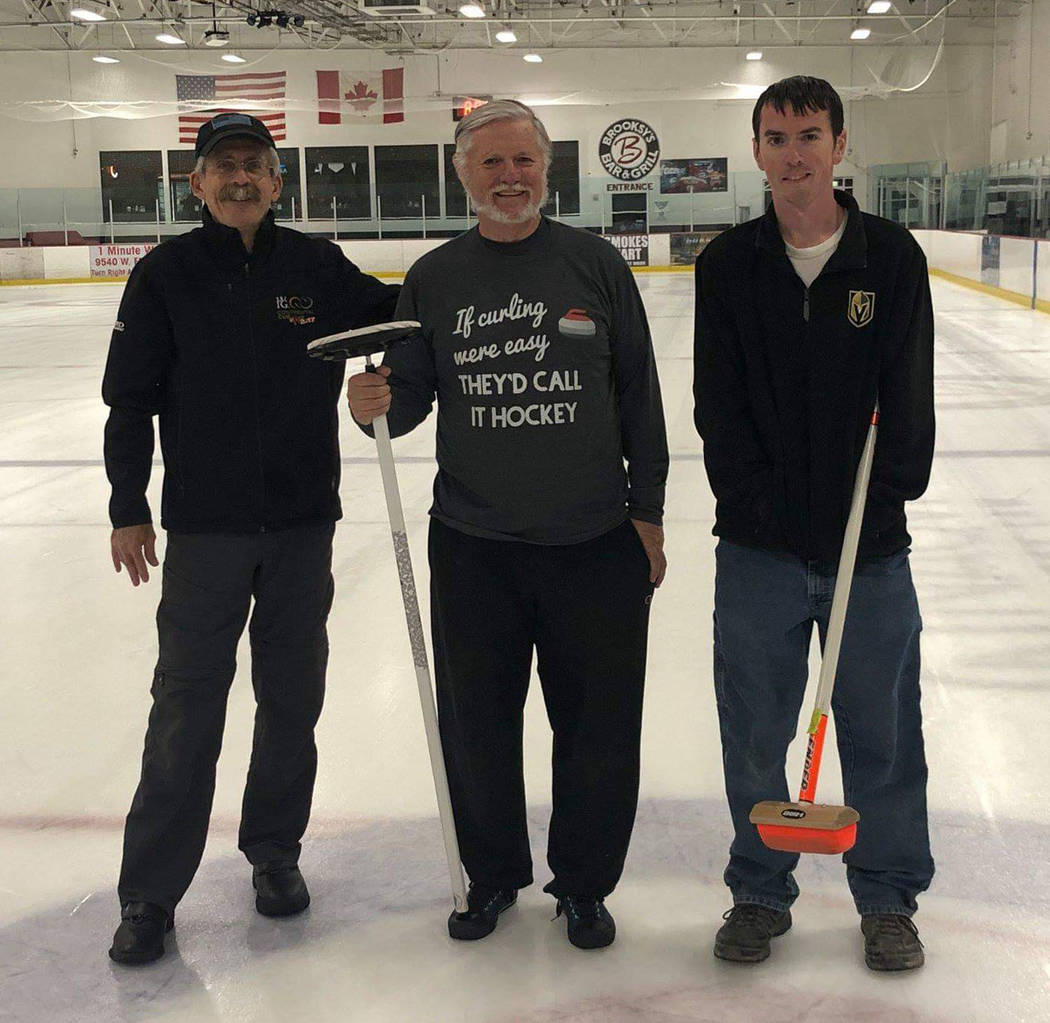 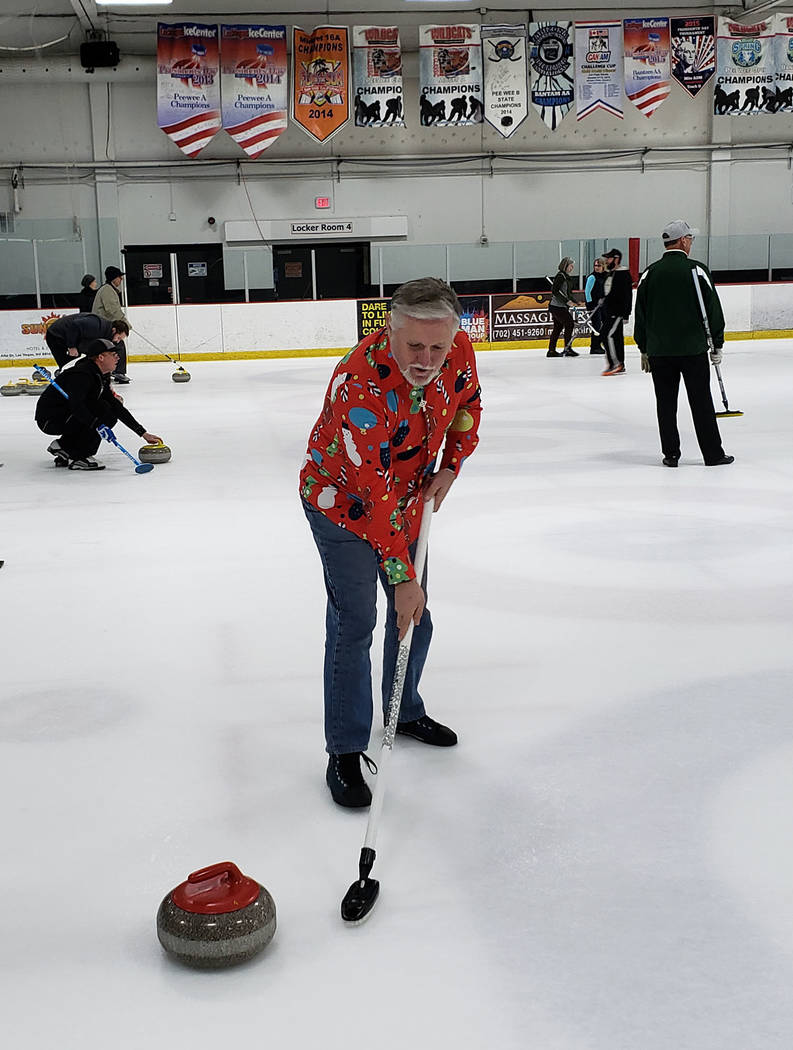 Karen Duryea/Special to the Pahrump Valley Times Tom Duryea of Pahrump sweeps to help guide the stone toward the house during the Las Vegas Curling Club's recreational league.

When Matt Duryea tells people he participates in curling, he says he gets one of two responses.

Apparently, not everyone got caught up in curling when it was featured prominently during the 2018 Winter Olympics in South Korea, when the United States, after rough outings in the previous two Olympiads, won gold in the sport for the first time. The Americans finished third in the round-robin, then defeated Canada 5-3 and Sweden 10-7 to take the gold, generating a wave of publicity for the sport.

But Matt’s father, Tom, got involved in curling before it became cool, relatively speaking, joining the Las Vegas Curling Club three years ago.

“When I moved here four years ago when I retired, I was looking for something to do,” Tom Duryea said. “I saw on Facebook they had Learn to Curl lessons in Vegas.”

Matt, who moved to Pahrump a year and a half ago, began curling six months ago.

“It was the offseason for softball, and it was ‘Hey, you want to go curling?’ ‘Sure, why not?’” he recalled.

Curling’s appeal lies partly in its accessibility. Men and women play, and age is not an issue.

“We do have a 10-year-old that curls with us,” said Tom, who explained that curlers in their 70s and 80s can use a hook on their broom to help throw the stone without bending over.

So if everyone from 10 to 80 is out there curling, how hard can it be? Well, as the Duryeas explained, it isn’t, but it is.

“Curling is really easy to learn how to play, but it’s very hard to get good,” Tom said. “The game’s called curling because as you throw the stone, you turn the handle a little bit. And as it slows down, it will curl in the direction you turned it. If it’s looking like it’s going to curl too far, you sweep hard, and that will keep the stone from curling and make it go straight. There’s a lot of strategy to sweeping.”

“That’s why I enjoy it so much,” Matt said. “Learning to curl the first time or two it’s fun, then it gets all serious and competitive.

“To me it’s a relatively simple exercise in geometry and/or physics. I played billiards a lot when I was younger, and it’s the same concept. You’re trying to make an object go from Point A to Point B, at exactly Point B, and how you get there is the important part.”

The object in question, the curling stone, is 42 pounds of granite with a plastic handle on top.

“They come from Scotland,” Tom explained. “There’s only one quarry in the whole world. You buy them in a set of eight. You don’t carry them around, they stay at the club. And when we have our bonspiel, we supply the stones for all of the teams.”

The bonspiel is a major event on the curling calendar, and the Las Vegas Curling Club hosts the Sin Sity Spiel each year, but Tom said there are probably a dozen bonspiels around the country taking place in January. This year’s Las Vegas event, scheduled to include a maximum of 32 teams, will be Jan. 11-13 at the Las Vegas Ice Center.

A major event means that the Las Vegas Curling Club will have something it doesn’t always enjoy during the regular 10-week league seasons: good ice.

“Sometimes the Zamboni driver gets in a hurry and he’ll put the blade down crooked, so you’ll have a ridge going down the center of your sheet,” Tom said. “We share our arena with high school hockey teams. It gets pretty chewed up.”

“As the hockey season goes on, the edges of the ice tend to lean down to the boards. One of our sheets, near the end of the season, you could stand over here, throw it to the boards and it will come back here. That takes lots of sweeping.”

“It gets real interesting real fast,” Matt added. “There’s also at some points you can set a stone down and it might slide to the side by itself. It makes things really interesting when you’re trying to throw across a puddle. A wet spot on the ice is one thing, but a puddle is something else.”

That simply will not do for an event Tom Duryea said will include teams from across the Western United States, Canada, Japan, Australia and New Zealand.

“For our bonspiel that’s coming up, the Wednesday before the Zamboni is coming out and scraping about three-eighths of an inch of the ice off,” he explained. “Then we’re going to flood the rink, about a quarter inch of water. Let it freeze, bring the Zamboni out, do it again, then flood the ice again. So we’ll have good ice for the bonspiel.”

Matt says the biggest misconception about curling is that it’s boring. For Tom, it’s that it’s easy. But the opportunity for people to learn for themselves how boring and easy it is or isn’t presents itself in frequent Learn to Curl events. The Sin Sity Spiel will include a Learn to Curl session at 3 p.m. Saturday, Jan. 12, during a break in the schedule.

“In our rec league, you’ll have people come out at Learn to Curl and say this is fun when they manage to throw the stone the length of the ice,” Tom said. “That gets them excited. But that’s as far as they get.

“Some people come and say this is kind of stupid, so never mind,” Matt said. “Other people come and said it was a lot more interesting than what you think. People who enjoy engineering or math really enjoy a sport like this because it makes you have to think. You’re not just blindly pushing a stone down the ice.”

“Last year we lost by one point in the finals to go to Canada,” Tom said. “The year before our team went to Vancouver.”

Not everyone can go from finding the Las Vegas Curling Club on Facebook to representing Nevada in a major event that quickly. But it is a sport for all ages, experience is not necessary, and Tom and Matt Duryea would like to see more people on the ice.

For more information about curling, contact Tom Duryea at tom@duryea.org