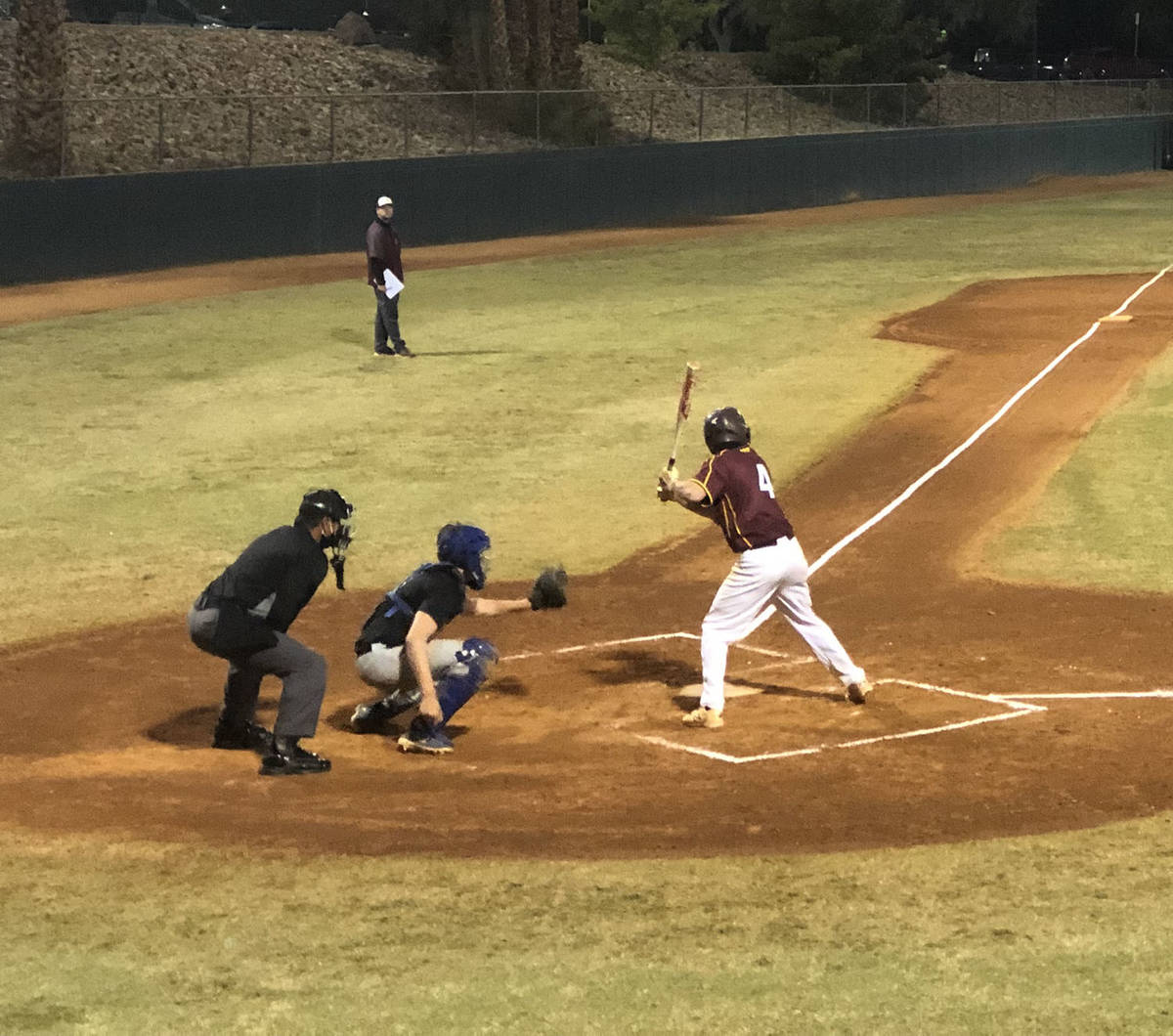 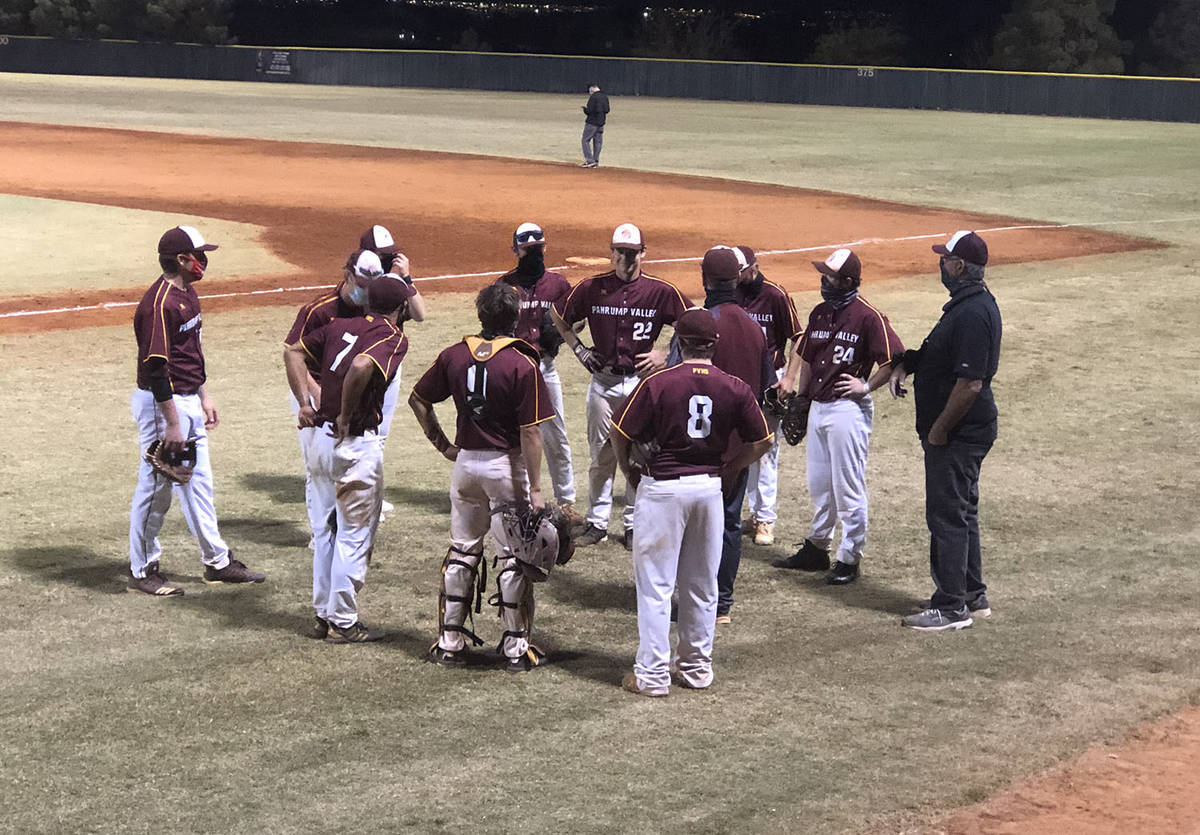 The opportunity arose to play in the Vegas Valley Baseball League, where teams are made up of players from some of the best high school programs in the state. To their credit, the Trojans wanted the challenge.

“I think we needed more competition,” pitcher/outfielder Jalen Denton said. “We’re a great team, and I think we can go places. When we play well, but we’re better than the other team or they’re a younger team, it doesn’t really help us.

“Coach asked, ‘Does anyone want to play in college?’ A lot of us raised our hands. And he said, then I suggest you play here.”

They started their 10-game Vegas Valley Baseball League schedule Friday night at Arroyo Grande Sports Complex in Henderson, and the results were a split of 5-1 games: a victory over the Enterprise Lions, a team made up of players largely from Sierra Vista High School, and a 5-1 loss to Mountain West, which draws players from Green Valley High School.

“Green Valley is one of the best programs in all of Vegas,” Trojans coach Drew Middleton said. “Four of their five runs came with two outs tonight. Three of the five innings we had guys in scoring position and didn’t get it done. That was the difference.

“Our defense and pitching are clicking, and then our offense we’re that one hit away.”

There weren’t many hits in the 5-1 win in the opener. Three of them came during a 2-run sixth inning, highlighted by a 2-run single by Jake Riding. Denton drove in the first run on an infield single that scored James Metscher.

The other runs had little to do with offense. Ryan Breathwaite singled to center in the third, moved to third when Metscher struck out on a pitch in the dirt but reached base on a wild throw to first by the catcher, then scored on a wild pitch. In the fourth inning, Kyle McDaniel and Denton were each hit by a pitch and Sterling Oshiro reached on an infield single. Zach Cuellar then drove in McDaniel with a grounder that forced Oshiro at second.

But that was enough. Denton started well on the mound, survived a rough patch in the middle of his outing, then closed by retiring five straight batters, four by strikeout. The rough patch included back-to-back walks followed by a hit batter, with a wild pitch allowing the Lions’ run to score.

“When I’m in a tight situation, I’ll just take a deep breath and look out somewhere and just pretend none of them are there,” Denton said. “I go through all of the mechanics and make a good pitch.”

“He started off strong, and then got into trouble a little bit,” Middleton said. “He started to speed up his mechanics. His lower half was rushing, and his top half was trying to catch up. But he settled down, took a deep breath, and found his way out of it.

“As a pitcher you don’t always have your best stuff. And he had 10 strikeouts in a little bit of a rough outing and got through all six innings while giving up only one run.”

It was the Trojans who managed only one run in the second game, but they were facing one of the best pitchers in Las Vegas.

“That’s a college-level arm,” Middleton said. “He’s throwing 84, 86 and has some nasty stuff. He can drop his arm down and go sideways. A pitcher throwing with different looks, we don’t really see that in our league. That’s the nice thing about this league and playing up against these players, we’re going to see some legit arms that we don’t normally see.

“I can’t tell you the last time we saw a pitcher that dirty. He had a scout here tonight watching him, a (College of Southern Nevada) scout. That kid’s legit, and he’s only a junior. At the end of the day, he shut us down, but it was really good experience for our guys to see that.”

In the end, it looked as if two Trojans would be on third base at the same time, resulting in an out. But instead of running into an out, the Trojans ran into a break.

“They got Sterling in a rundown, and when he was running back to third the third baseman didn’t get out of the way, so it was fielder interference and he advances home,” Middleton explained. “He ran into him, which is what we train them to do, so that was good.”

During a fall season in which the Trojans seldom have needed to use a second pitcher, they used three against Mountain West, which turned two walks, a double and a single into a 3-0 lead in the top of the first. But it was tight the rest of the way, and Middleton drew positives from the game.

“They’re a really good program, and we played with them, better than the score shows,” he said. “I don’t think they’re better than us, but I felt like we competed.”