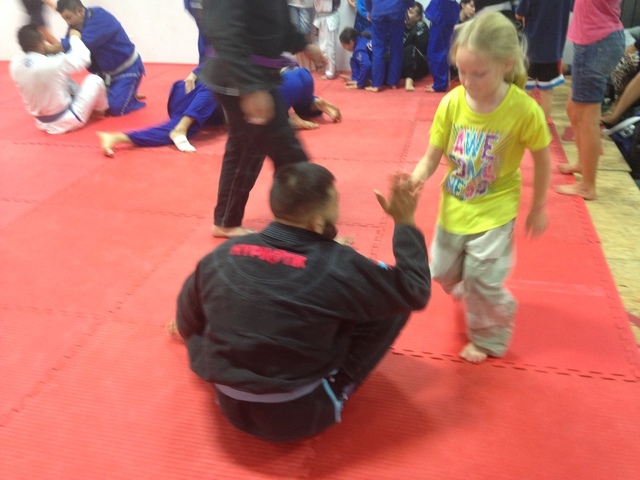 Special to the Pahrump Valley Times A young girl gets her first jiu-jitsu instruction at Cascao Jiu Jitsu at the VIP Cheer Gym on State Street at the grand opening on Saturday. 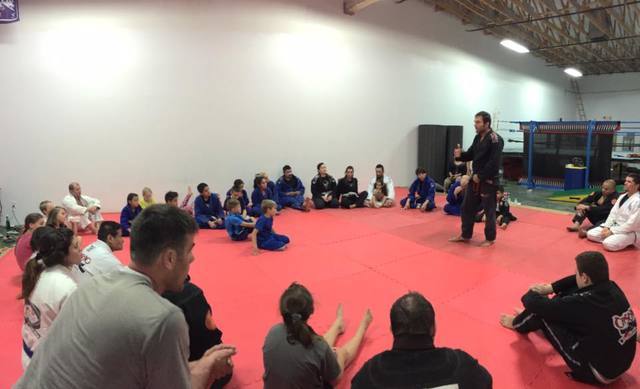 At the grand opening of Cascao Jiu-Jitsu at the VIP All-Star Gym, a large crowd was there for the opening Saturday. Special to the Pahrump Valley Times 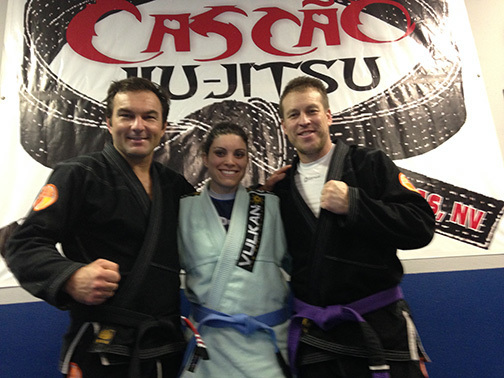 From left to right, Walter “Cascao” Vital, Ashlee Hernandez and Gabriel Hernandez at the grand opening of Cascao Jiu-Jitsu in Pahrump. Special to the Pahrump Valley Times

In the valley, there aren’t that many martial arts places to train but now there is one more place to consider.

After a one-year absence in the valley, Brazilian jiu-jitsu returns to Pahrump with the opening of a new jiu-jitsu training facility at the VIP All-Star gym at 1375 State St. The facility is called Cascao Jiu-Jitsu and is affiliated with Cascao Jiu-Jitsu in Las Vegas. The grand opening was held on Saturday.

“My wife and I are fortunate to have two good jobs,” Hernandez said. “Teaching jiu-jitsu in this valley is not about finances. I could care less if I make a single dime. I just want a place where the kids and adults can train.”

Gabriel Hernandez is a Pahrump Valley High School graduate of the class of 1991, where he lettered in football, wrestling, baseball and the rodeo club. He serves this town as a Nye County’s Sheriff’s deputy and lives with his four children and wife Ashlee here in town.

He began his grappling training at age 14, participating in freestyle and scholastic wrestling in high school. At age 20, Gabriel joined and served in the United States Marine Corps Reserves while attending college. In 1998, Gabriel started his law enforcement career and began to further his self-defense training. During that time, Gabriel became a certified instructor in multiple defensive tactic systems. Gabriel has coached Brazilian jiu-jitsu and youth MMA at two prestigious gyms in Las Vegas. Gabriel continues his training in Brazilian jiu-itsu, self-defense and is currently a two-stripe purple belt.

“It is stressful when you run something like this as a business, but my wife and I don’t need to do that,” he said.

Hernandez was thankful for all the help he has received from his instructor.

“I think our instructor, Walter Vital knows the amount of stress,” Gabriel Hernandez said. “And this is the reason he donated to us the mats and didn’t charge us an affiliation fee. He even brought a group out for our opening day.”

Cascao Jiu-Jitsu was founded by head instructor Walter “Cascao” Vital, who was born in 1976, and is from Joao Pessoa PB, Brazil. He started training Brazilian jiu-jitsu in 1991 and earned his black belt under Mario Sukata, in 2003. In 2004, Vital moved to Las Vegas to establish his own academy. His list of accomplishments is extensive and includes two-time World Champion (2007 and 2012), two-time Pan American champion (2006 and 2009), multiple North American Champion, 2005 U.S. Open Champion, and a multiple Grappler’s Quest winner. He now has schools all over the world, including four in Las Vegas, two in Washington, four in Michigan, one each in Oregon and Hawaii, and 12 in his native Brazil.

Ashlee Hernandez is a former Pahrump Valley Trojan and Miss Pahrump. In 2012, she found herself residing in Las Vegas as a stay-at-home mother of four children. It was at that time she decided to attend a Las Vegas-based MMA school with her husband Gabriel Hernandez. Ashlee Hernandez took one jiu-jitsu class and was immediately hooked on the art. She found that it was not only an effective form of self-defense but was also a great way to get into shape. In 2014, Ashlee Hernandez earned her blue belt and started focusing on competing in tournaments. Since that time she has competed in local tournaments and even placed in the 2015 IBJJF Masters World Championship.