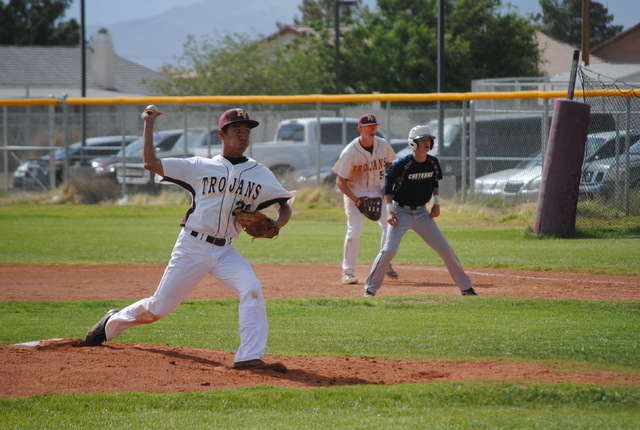 The Trojans baseball team has been lacking in the hitting department, but someone forgot to inform Cheyenne of this problem as the Trojans exploded with 10 hits, 9 RBIs and 10 runs to beat the Desert Shields 10-3 on Friday.

The win secured a playoff spot for the team. The Trojans are in third place now, but face Faith Lutheran on Thursday. The top four teams make it to the playoffs.

Pahrump (21-9 overall, 8-4 Sunset League) got an early lead in by scoring first in the first inning. They then trailed Cheyenne (9-12, 3-9) 3-1 in the top of the third, but it was a short-lived lead as the Trojans battled back by scoring 3 runs in the bottom of the third.

Josh Mortensen then shut down the opposition for the rest of the game.

Mortensen pitched a complete game, allowing no earned runs, with a walk and a strikeout. He finished 1-1 with 3 walks, 3 runs and 2 stolen bases. He was named once again, the player of the game for his efforts.

Coach Brian Hayes said his team out-played Cheyenne in every aspect of the game.

“Pitching-wise, Josh Mortensen walked only one batter and had 5 strikeouts and scattered 8 hits,” Hayes said. “Defensively, we made only 1 error (all 3 runs scored after this 2-out error). When we get on base and have an opportunity to be aggressive on the base paths we tend to do much better in the win-loss column.”

In the game against Cheyenne according to the coach, the Trojans walked 8 times, had 11 hits, and had 10 stolen bases.

Hayes said the team will look at the last two games against Mojave and Faith Lutheran as an opportunity for them to gain momentum before playoffs.

“We expect Mojave to hit the ball, which is a good challenge for us because we will have to keep the sticks going in order to knock them off,” he said. “Faith will be a different challenge. They won’t give us much, so we will have to pitch, play solid defense and produce some timely hits. A win at Faith would be a great way for our seniors to finish their last regular season game.”