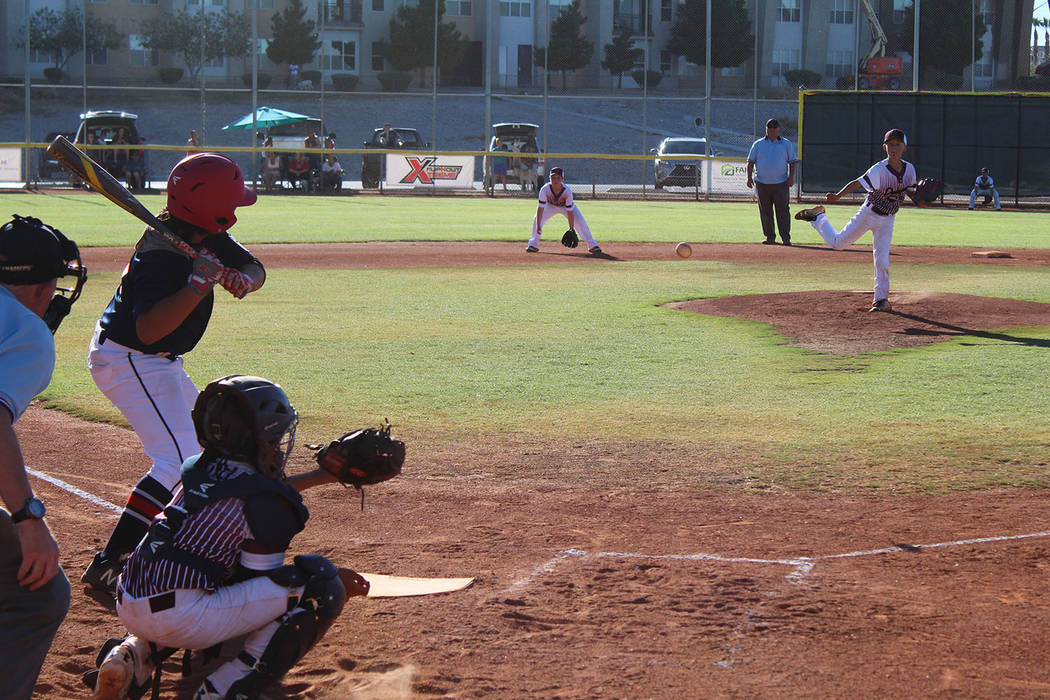 Caroline Thacker/Special to the Pahrump Valley Times Jason Christiansen of the P-Town Little Leagues 9-to-11-year-old all-stars delivers a pitch to a Peccole paper during the District 4 Tournament on Tuesday at Mountain Ridge Park in Las Vegas. 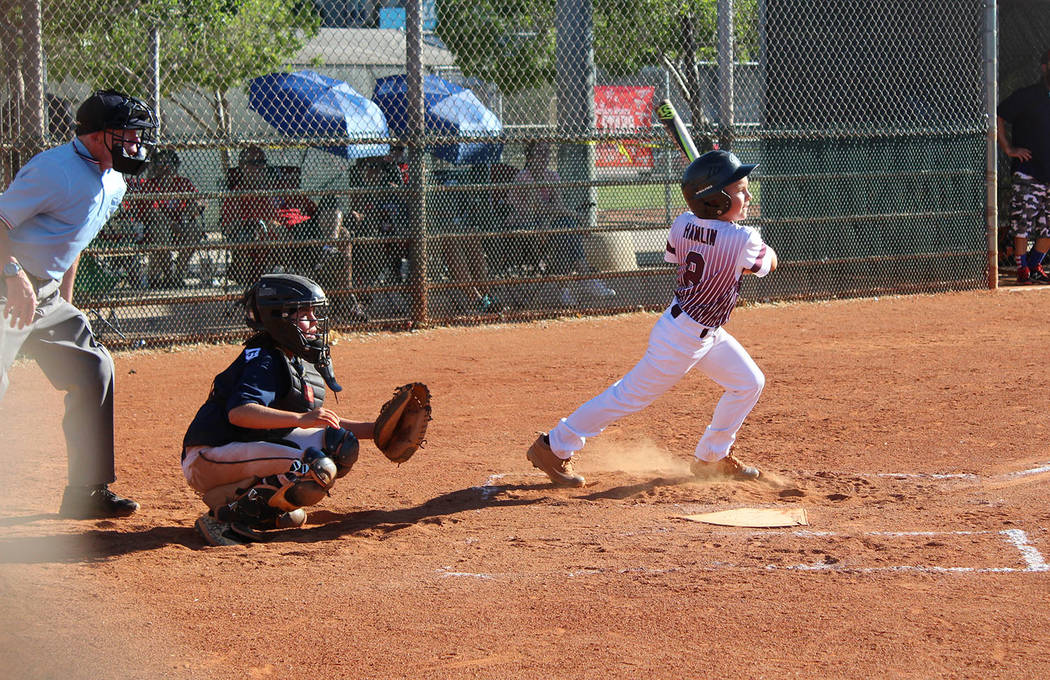 Caroline Thacker/Special to the Pahrump Valley Times P-Town Little League's Ryan Hamlin breaks from the batter's box after making contact against Peccole on Tuesday during the District 4 Tournament in Las Vegas. 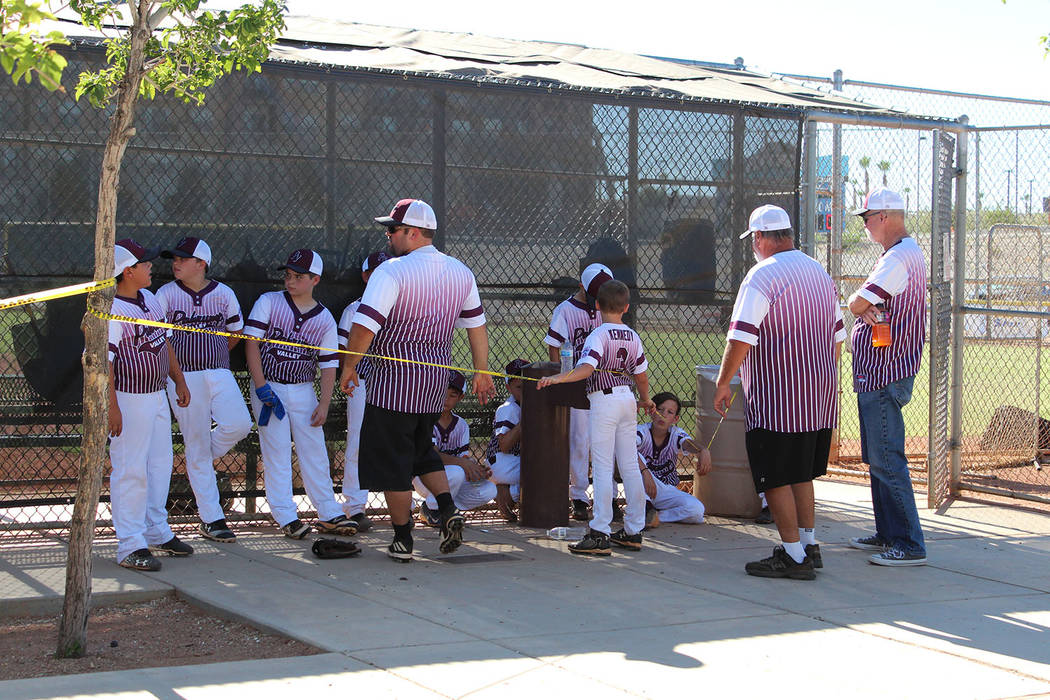 Caroline Thacker/Special to the Pahrump Valley Times P-Town manager John Walker and coaches Richard Swingle and Pete Christiansen talk to their 9-to-11-year-old all-stars before the start of a District 4 Tournament game on Tuesday at Mountain Ridge Park in Las Vegas.

Caroline Thacker/Special to the Pahrump Valley Times Preston Kennedy keeps his eye on the ball during P-Town Little League's game Tuesday against Peccole during the District 4 Little League Tournament for players aged 9 to 11 in Las Vegas.

Tuesday was a rough evening for Pahrump’s Little Leaguers at the District 4 Tournament in Las Vegas.

The 8-to-10-year-old all-stars and 9-to-11-year-old all-stars each suffered lopsided losses to Peccole, with the former losing 18-0 in three innings and the latter falling 14-2 in four. The losses spelled the end for both teams in the double-elimination tournaments.

But don’t try telling P-Town Little League 9-to-11 All-Star manager John Walker going home early makes the tournament not worth the effort. There are always lessons to be taught.

“Learning how to play hard, giving 100 percent, that’s how you keep your self-respect as an athlete,” Walker said. “You do what the coaches tell you to do; in other words, the fundamentals. That is what these kids picked up, and I’m extremely proud of them.”

And Walker has seen enough baseball to know when players are playing the game the right way. He’s been coaching youth baseball for 34 years.

After opening the tournament Saturday with a 13-0 loss to host Mountain Ridge, P-Town started off its second game on the right foot with a first-inning run. With one out, Caden Briscoe reached on an infield single and moved to second on a passed ball. One out later, Brycen Foust delivered a single to right field, scoring Briscoe and giving the Pahrump team an early 1-0 lead.

It didn’t last. The next time a P-Town player came to the plate, the score was 11-1.

While it might sound like a worn-out cliche, the Pahrump players never gave up. They loaded the bases in the second and third innings, the first threat ended by an infield grounder and the second on an unfortunate and rarely-seen play.

Ryan Hamlin came to the plate with the bases loaded, and a pitch got away from the catcher and bounded toward the backstop. All three runners broke, but the runner at third didn’t think he could score and froze, then retreated. The other two runners were practically at the next base by the time they realized the lead runner wasn’t moving, and Peccole had its choice of which runner to tag for the last out. They chose first base.

Undaunted, P-Town came back in the next inning with a run that scored on a single up the middle by Briscoe.

“Caden was hitting real well in both games of the tournament,” Walker said. “And Ryan Hamlin, for a 9 year old, was absolutely outstanding.”

Looking for bright spots comes with the territory after two one-sided losses, and the biggest one was obvious to Walker.

Coaches don’t quit either. In both games, the coaching from the dugout never stopped despite the scores. Over on the field where the 8-to-10-year-olds were losing for the second consecutive night, fielders were being instructed on what to do on a fly ball to shallow right field in the midst of an 11-run third inning by Peccole.

There are reasons Pahrump teams struggle often in the postseason, and Walker knows it.

“They have all 11 year olds, and they are bigger,” Walker said of the Las Vegas teams. “But they have a much larger pool to draw from than we do. That’s why it’s very difficult for us to compete and make runs at district championships.”

Little League teams are drawn from areas of similar population, roughly 30,000, according to Walker. But not all groups of 30,000 people are alike.

“We have a disadvantage because our population is an illusion because we have so many older people,” he said of the difference in demographics between Pahrump and Las Vegas. “We don’t really have that 30,000 base to draw from like they do here.”

If there’s any frustration because of that, don’t look at Walker to see it.