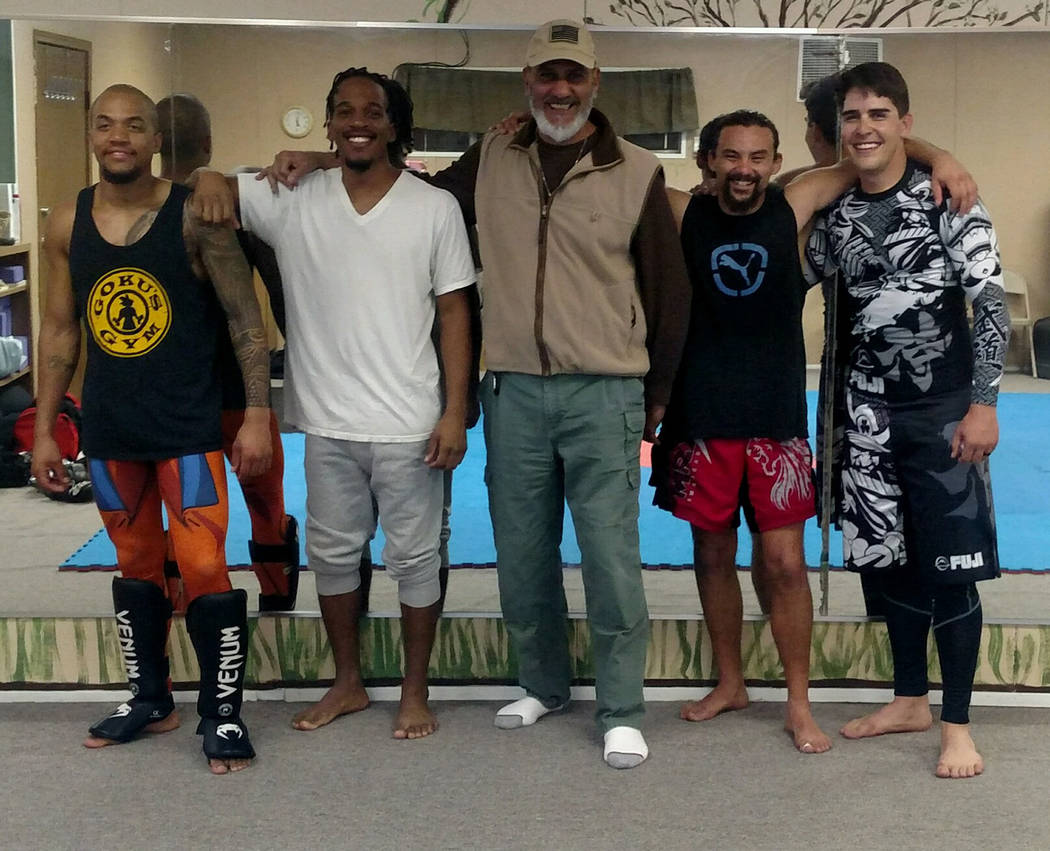 Special to the Pahrump Valley Times Andrew Gonzales, second from right, has been getting help from, from left, Diamante Williams, Rahshawn Bethea, Jose D. Hernandez and Josh McKillips to train for his MMA return. Not pictured is Jesse Tarver, whom Gonzales also cites as an immense help to him. 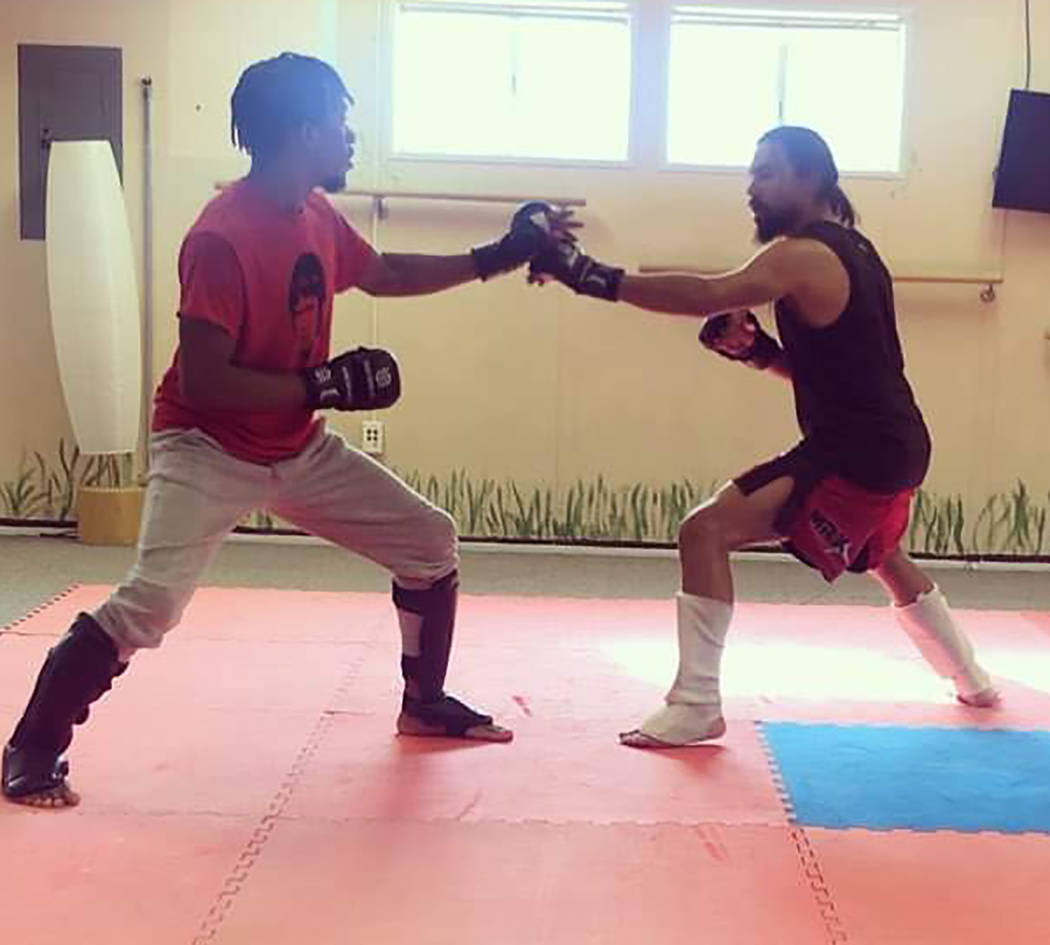 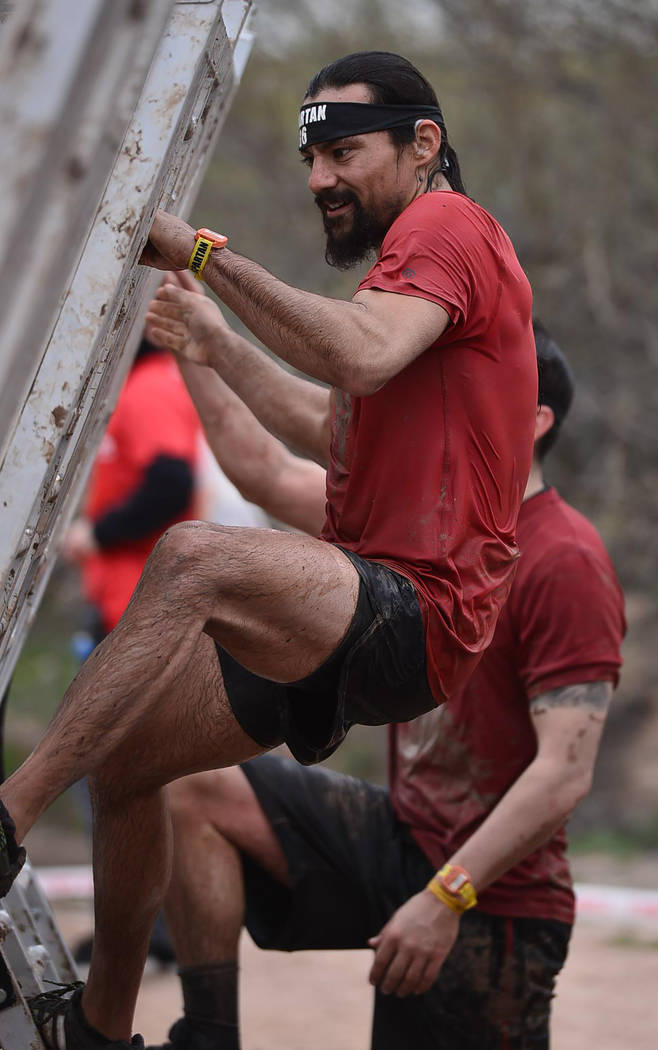 Special to the Pahrump Valley Times Andrew Gonzales of Pahrump at the Helix Wall during the Spartan Sprint Race in February in Arizona, something he did during training to get back into the mixed martial arts ring. 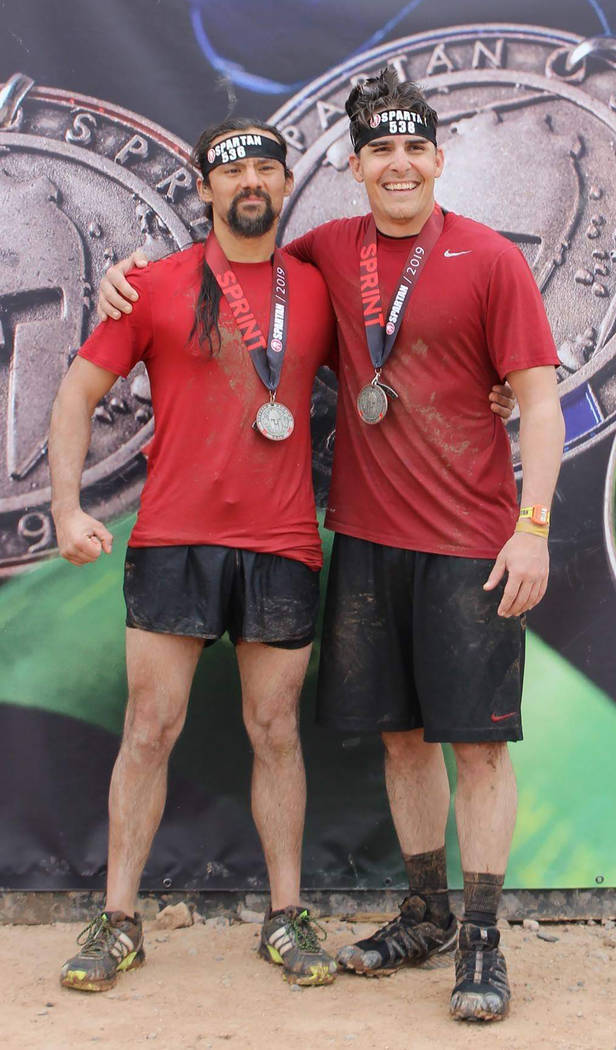 Special to the Pahrump Valley Times Andrew Gonzales, left, and Josh McKillips after they completed the Spartan Sprint Race in Arizona.

For the first time in almost three years, Pahrump’s Andrew Gonzales will step into the ring tonight for a Tuff-n-Uff mixed martial arts fight during Fight Night Orleans at The Orleans in Las Vegas.

“I am getting back into it,” Gonzales said. “I took a hiatus to focus on schooling and purchasing a home. I attended a couple of open tournaments here and there, but now that I have a little more time on my hands, I can attend to the training needed for fighting in Tuff-N-Uff.”

Gonzales, who is profoundly deaf, went to school for American Sign Language interpreting and bought a house in Pahrump since his last fight, but he never stopped working out. The second-degree black belt in Chugoku Kenpo Karate, who is working toward third degree, always has been active in martial arts.

“I was part of Dragon Cloud Dojo when it was open here in Pahrump, and when my sensei decided to retire I still kept up with my martial arts training and teaching consistently,” Gonzales explained.

“As far as prepping for the fight, specifically I have been training since January, so roughly about six weeks of specific fighting prep,” he continued. “I have been working with two main instructors. Sensei Jose Hernandez, 7th dan black belt and head of Dragon Cloud Dojo USA, is the one I have been focusing on my standup for striking. My coach, Robert Wilson, a first degree black belt in jiu-jitsu and head of Mix-it-Up Martial Arts Academy, has been working on my ground game defense and prevention strategy against grapplers.”

That has been a focus for Gonzales because going to the ground has not been a strong point for him.

“I have a couple of martial arts friends that I will do drills with and who have come out to assist me with sparring and reflex/muscle memory training,” he said. “The main emphasis that we have been focusing on for training is capitalizing on my striking and prevention of takedowns in the ring. My previous fights had me go to the ground which is not my strong point. So this time around, we had enough knowledge to increase my ground defense and draw out my striking power.”

The bantamweight fight tonight will match Gonzales with Broxsten Salguero.

“There is little known about my opponent other than he is a jiu-jitsu practitioner and a competitor and that he trains at Wand Fight Gym in Las Vegas,” Gonzales said. “So the strategy is to defend and prevent the takedowns or going to the ground and take him out with strikes. He is a younger guy, so he may throw all his energy into the first round. We shall see.”

Gonzales considers Pahrump his hometown, and he has lived here since 2006. For the past decade he has worked with the Nye Communities Coalition, first with AmeriCorps and now as a youth leadership development coordinator.

“My area of expertise lies with developing leadership skills using exercises and trainings that focus on communication, teamwork, resource allocation, strategizing, initiative and problem solving as well as other areas needed to prepare them for roles as leaders or to take on a leadership role,” he explained.

Gonzales said the youth leadership group participates in community service events and runs some of its own, including the annual Kick Butts Day anti-tobacco campaign in March.

“They will clean cigarette butts from the local park playground and compare it to previous years’ collection and use it when discussing tobacco use issues to key stakeholders,” Gonzales said. “They will also have areas where they can educate and inform the community regarding the dangers of tobacco use and some of the policy changes that are coming up and how the community can make a difference.”

Gonzales plans to go beyond third degree black belt and eventually open a school in Pahrump. He functions with the help of hearing aids, but with only about 9-12 percent hearing in each ear he must read lips when communicating. The situation is progressive, and at some point Gonzales will be completely deaf.

None of which will matter tonight when he steps into the ring against Salguero. There are 18 bouts on the Fight Night card, with Gonzales taking on Salguero in the sixth bout. Tickets, starting at $25, will be available at the door.