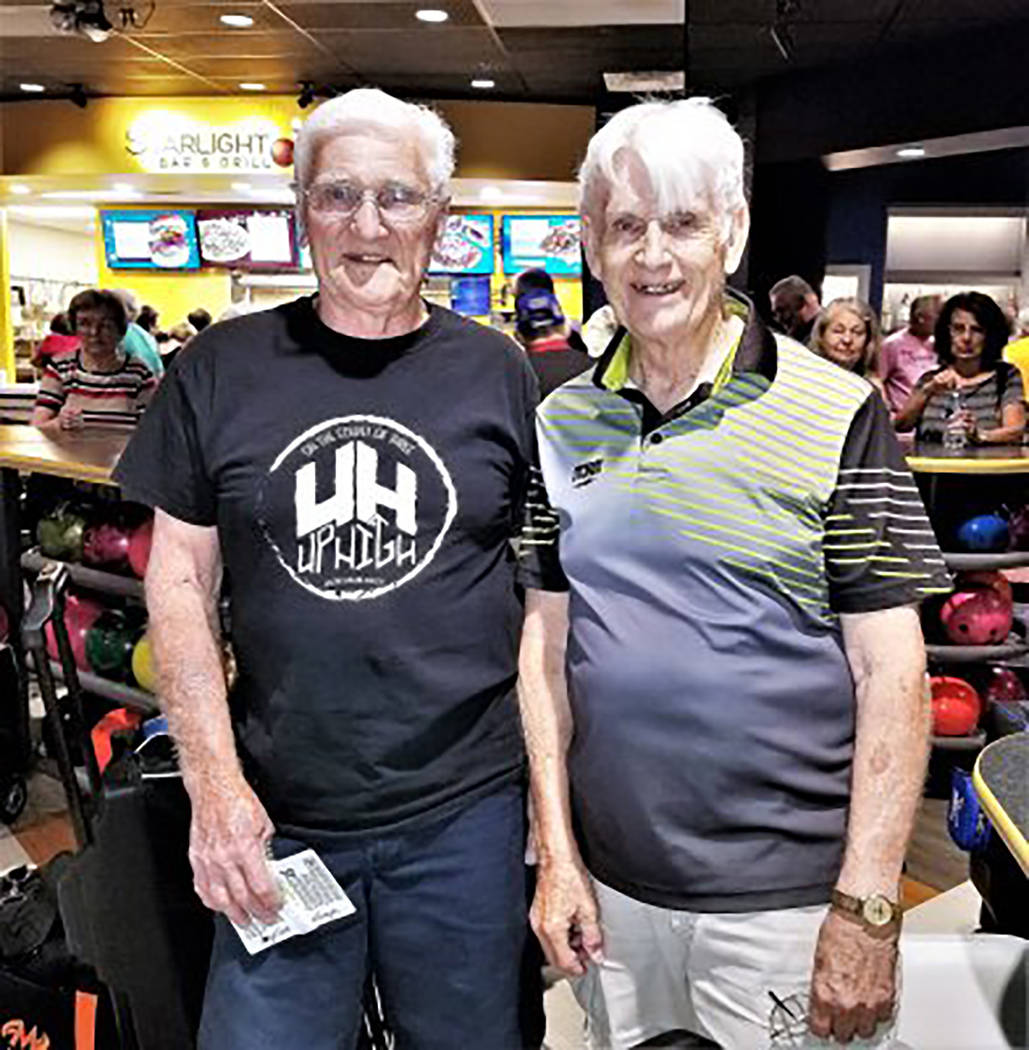 Special to the Pahrump Valley Times David and Randy Gulley teamed up to win a silver medal in men's doubles bowling at the National Senior Games in June in New Mexico. 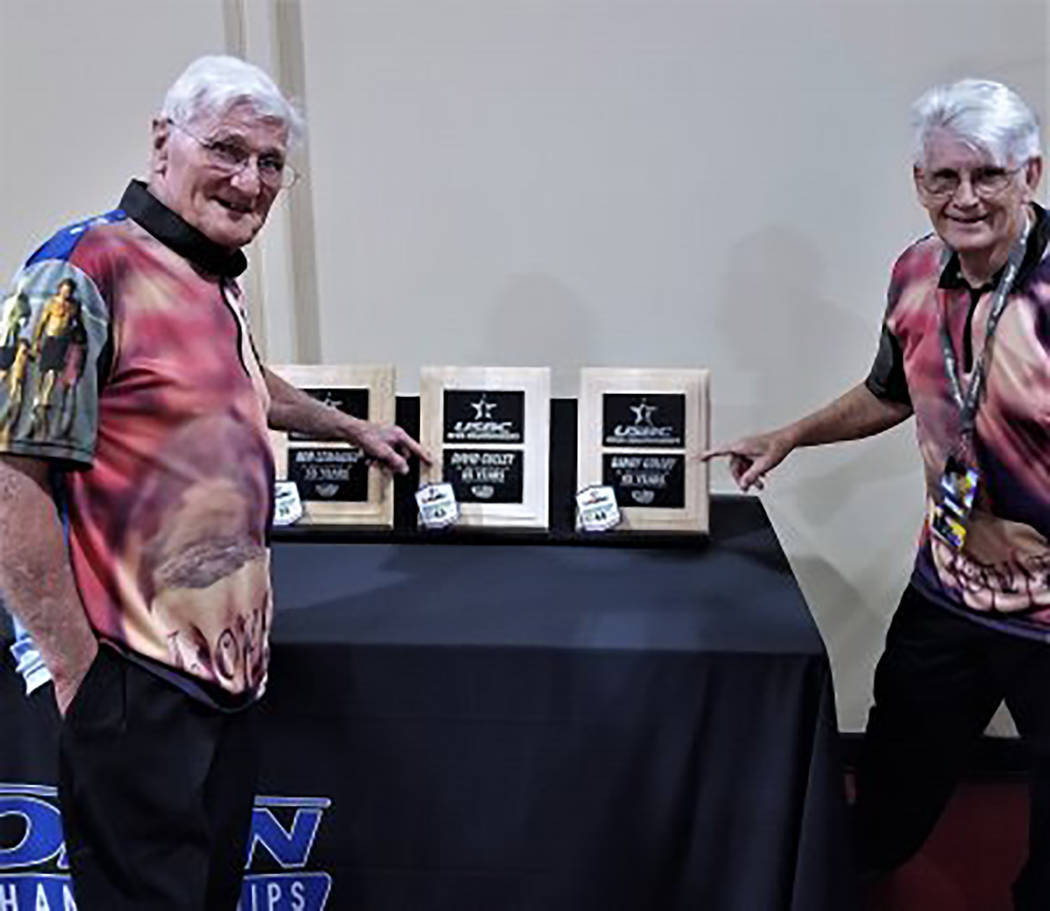 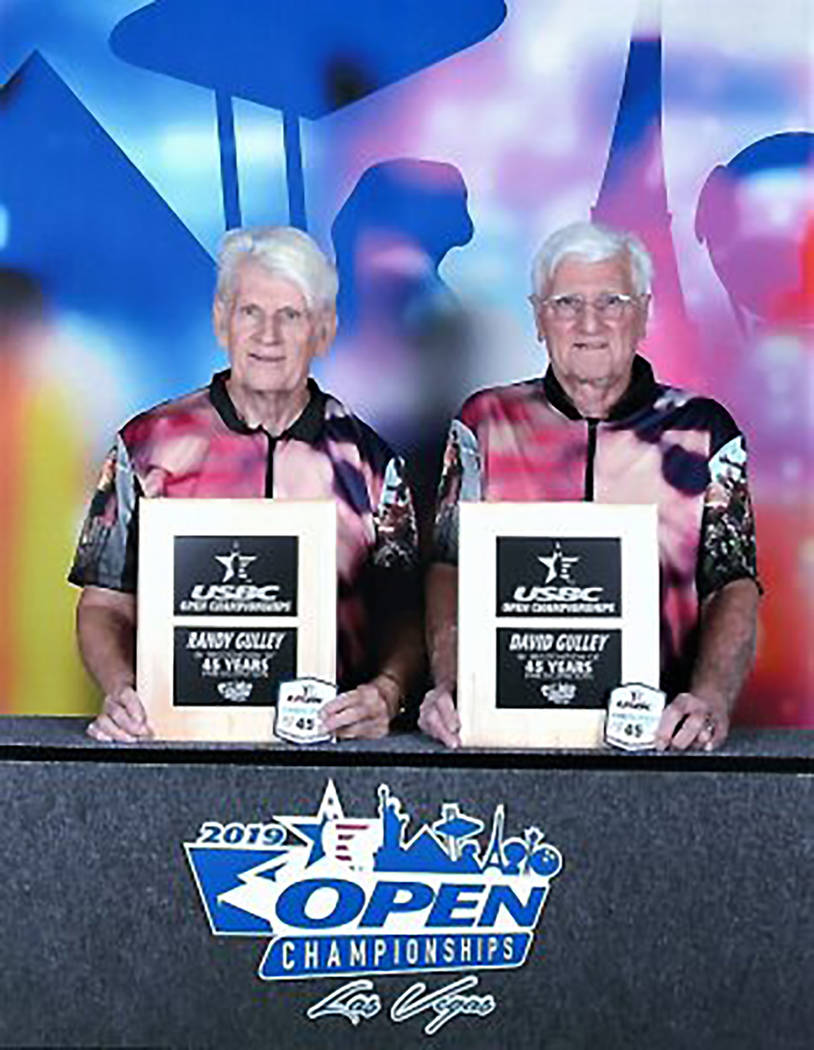 Special to the Pahrump Valley Times David and Randy Gulley with their 45-year plaques at the United States Bowling Congress Open Championships in Las Vegas. 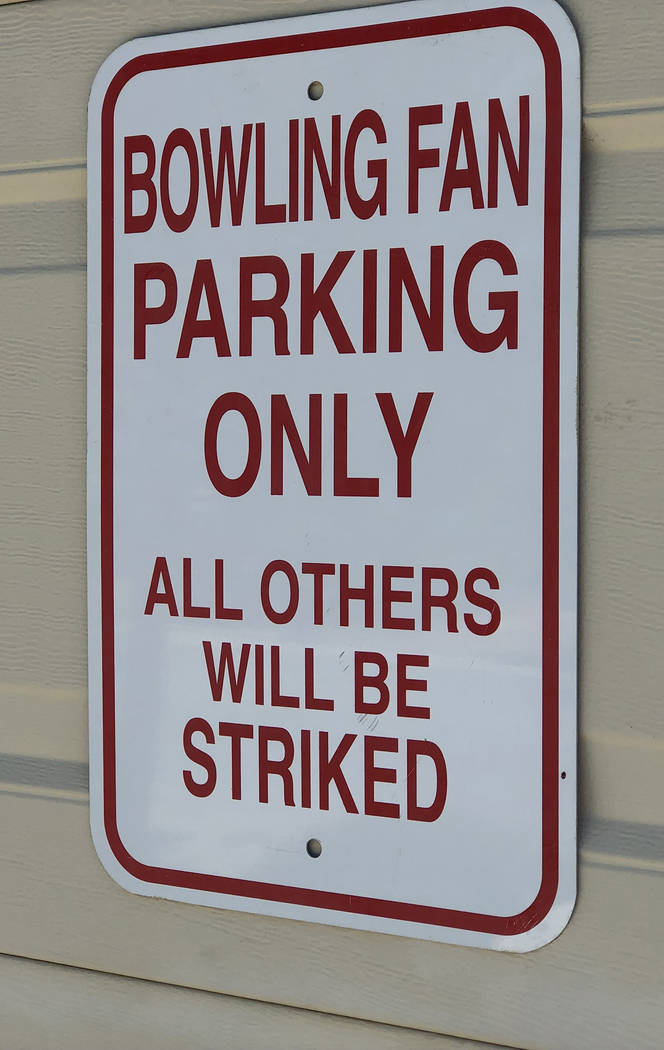 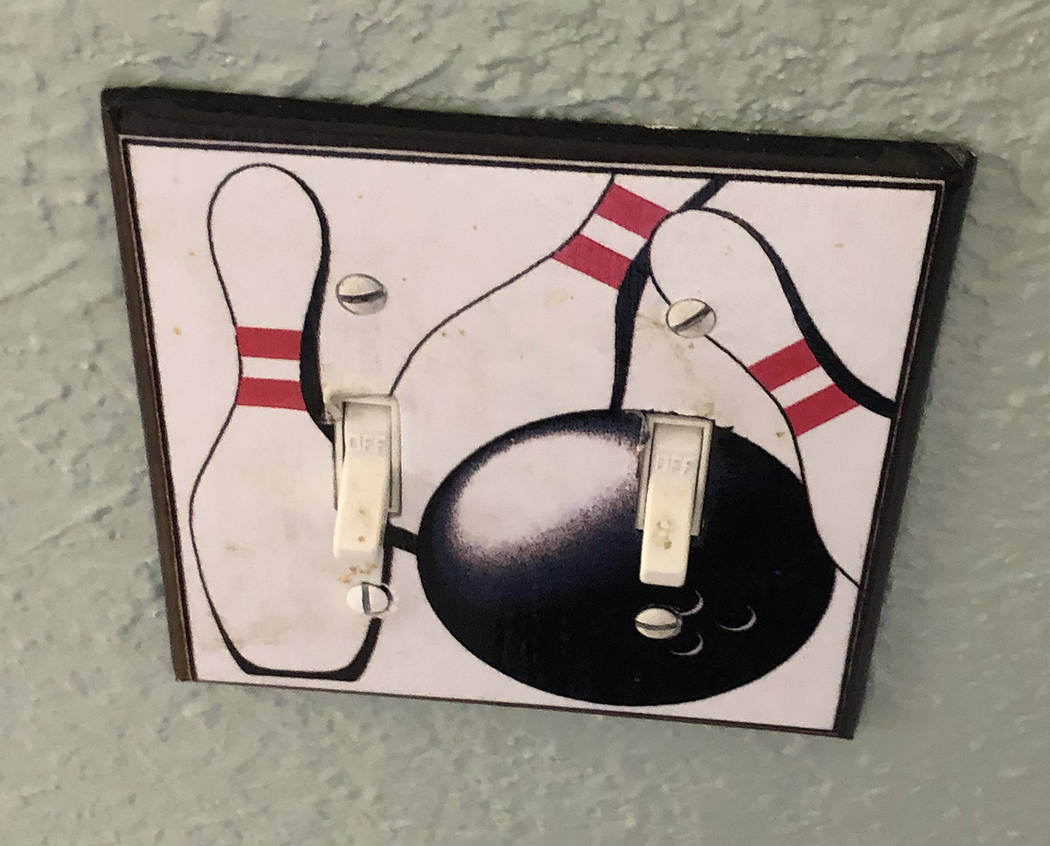 Tom Rysinski/Pahrump Valley Times At Randy Gulley's home in Pahrump, even the light swtiches reflect his passion for bowling. 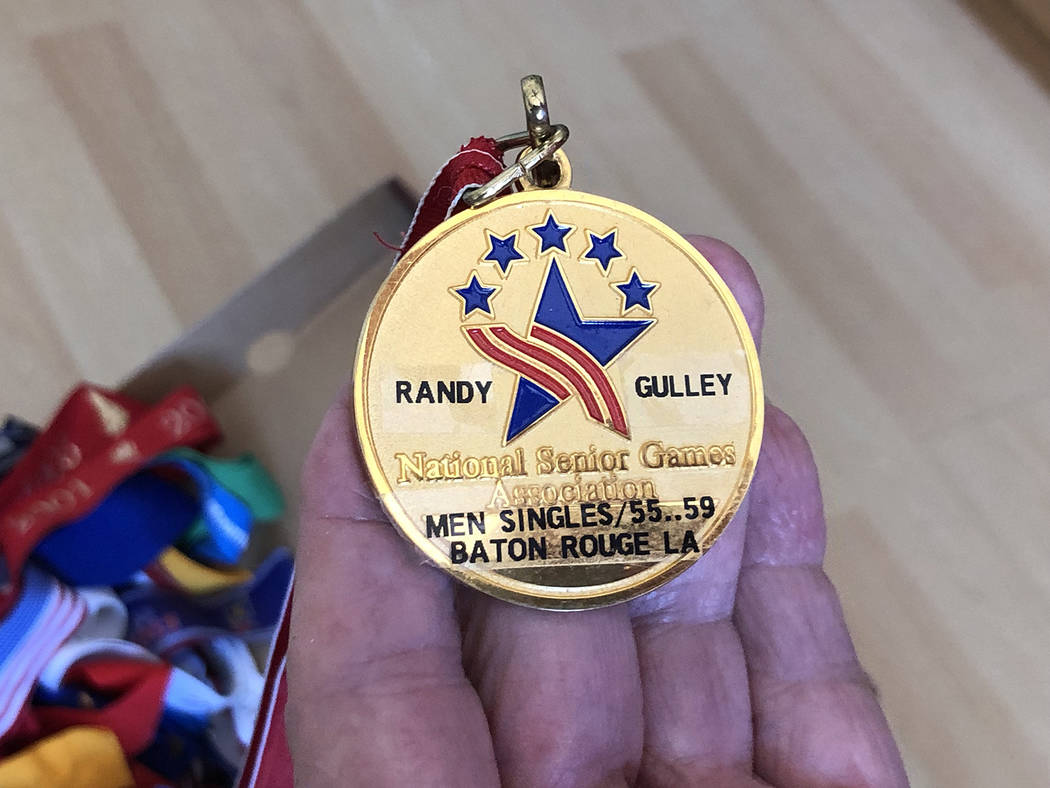 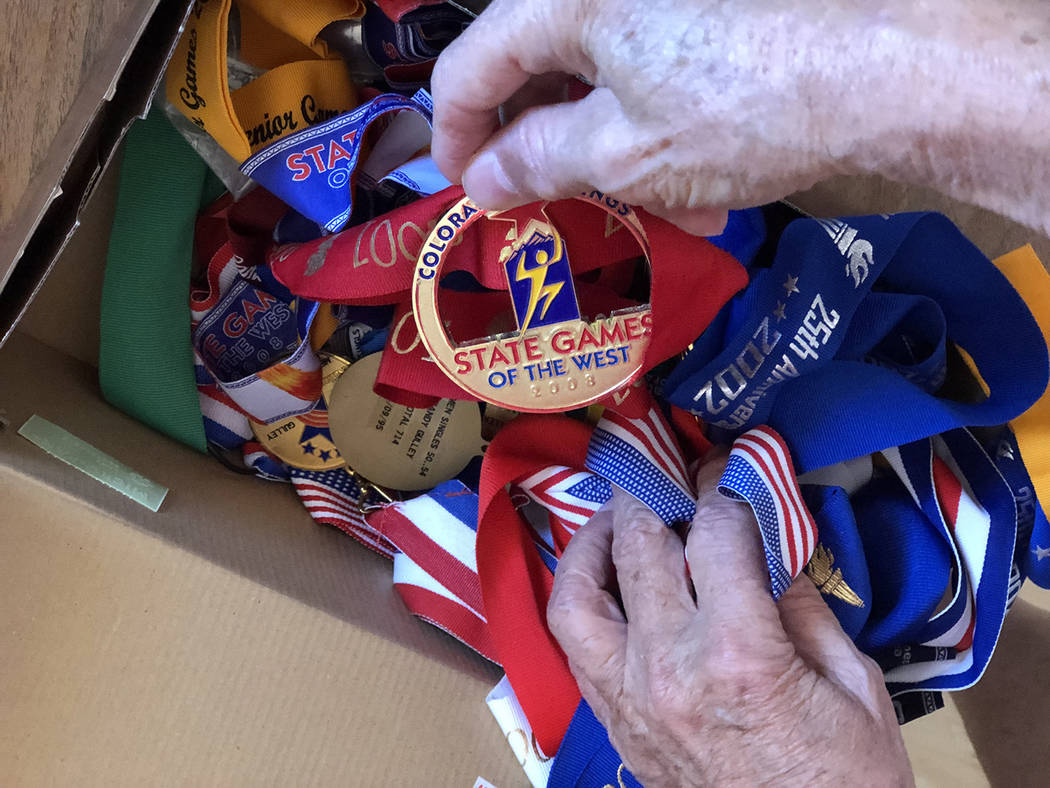 Tom Rysinski/Pahrump Valley Times Randy Gulley of Pahrump estimates he has won roughly 60 medals in bowling competitions, most recently a silver in men's doubles competing with his brother at the National Senior Games in New Mexico.

Sixteen years is a long time between winning medals in a national sporting event, but Randy Gulley proved last month that, when it comes to bowling, he’s still got it.

Gulley teamed with his brother David for a 1,192 over three games to win the silver medal in the 75-to-79 division of the National Senior Games in Santa Ana Pueblo, New Mexico.

Gulley wasn’t in a 16-year slump, he just had not competed in the National Senior Games since winning a silver medal in men’s singles bowling in 2003 in Hampton Roads, Virginia.

“The only reason I went this year was because my brother wanted to go,” Gulley said. “He’s never bowled in it before, and he’s a year younger than me, so we decided to go out to Albuquerque.”

While Gulley’s brother was new to the National Senior Games, he was not new to competitive bowling. In fact, both brothers were honored with plaques marking their 45th year at the United States Bowling Congress Open Championships at South Point Hotel Casino in Las Vegas.

“Every five years you get a plaque,” Gulley explained. “If we make it to 50, my brother and I, it will be all over the paper, because it will be something two brothers have never done before at the same time. If we live long enough, that would be awesome.

“The guy who writes bowling already has written the article, and I said, ‘That’s five years from now, guys. I’ve got to make it that far.’”

Gulley already had one gold and one silver medal from his previous National Senior Games experiences. In 2001, in Baton Rouge, Louisiana, he rolled a 655 series, 12 pins better than Texan Walter Hanel, to win gold in the 55-59 division. Two years later, in Hampton Roads, Virginia, Gulley performed even better, rolling a 684 series, but that was 35 pins behind Mike Klapik of Connecticut. Gulley settled for silver in the 60-64 division, well ahead of Connecticut’s James Birritta’s 640.

This time around, both Gulleys competed in singles as well as doubles, but they each had better games bowling together.

“Singles, I didn’t fare too well,” he said. “In doubles, I came back and did pretty well. The team that beat us was from Kentucky. I was talking to them, harassing them, didn’t work. ‘You actually have bowling centers in Kentucky?’

But in doubles, they combined to shoot 1,218, well ahead of Kentuckians Stephen Delles and David Troutman at 1,161. But in the finals, Delles and Troutman took gold, beating out the other seven finalists with a score of 1,264 while the Gulleys were second at 1,192. Sixteen doubles teams entered the tournament.

Gulley is new to Pahrump, having moved here around Thanksgiving last year. Previously, he lived in North Las Vegas after spending 23 years in Colorado Springs. A veteran who spent three years in the Army, Gulley worked for 29 years in a civilian job for the Department of Defense at military bases.

“I was the Freedom of Information Act officer, I was the Privacy Act officer, I was in records management,” recalled Gulley, who has lived in Korea, Germany — where he started a bowling league, of course — and Okinawa. “I had 100 people working for me. Then they were reorganizing at Peterson Air Force Base and they were going to give me a hundred more, so I got an early out.”

Gulley’s talents for organization were not reserved for his full-time job, as he has been in numerous positions of responsibility at all levels of bowling. He has been co-commissioner for the Rocky Mountain State Games and past president of the Colorado High School Bowling Federation. He served as bowling commissioner for the State Games of America, a biennial multisport event for amateur athletes, which opens this year July 31 in Lynchburg, Virginia.

“Anything to do with bowling I’ve been involved in,” he said.

He is in multiple bowling halls of fame and was the torch bearer at the 32nd Rocky Mountain Senior Games in 2009 in Greeley, Colorado.

“I was the only bowler who has ever been a torchbearer,” Gulley said. “I’m walking down the street with the torch with all of these people behind me.”

These days, he’s best known for photographing bowling events, recognized when he walks into a bowling center with his camera around his neck. He is on the board of the International Bowling Media Association and was a credentialed photographer at the Open Championships. He also was well known in bowling circles for writing stories about the sport, most notably as the head staff writer of the Colorado Bowler for 14 years.

“I hate journalism,” Gulley admitted. “I hate writing. That’s not my thing, but I took the photos and I had to start putting words with them. They got bigger and bigger. I still have articles going in papers, but I don’t write that much anymore. It’s mostly my photos that hit the papers.”

“They did a horrific job of running it,” said Gulley, who has run bowling events at the state and national levels. “And the bowling was actually worse. My brother, this was his first tournament of this type, and he said he’ll never bowl this again. If this was my first time, I’d never come back. It left a bad taste in my mouth.”

And those issues remained right until the end.

“My brother went over and said we wanted to get our medals because we had to leave. We were coming back for the Open Championships at the South Point. They wouldn’t do that. When I got home, I called someone who was still there, asking if he could pick up the medals. I emailed someone on the board of the Nevada Senior Games, but they said they won’t mail out medals, but they turned us down trying to pick them up. So we’re probably not going to get a medal.

“It’s a fun event, and they turned it into a bad event.”