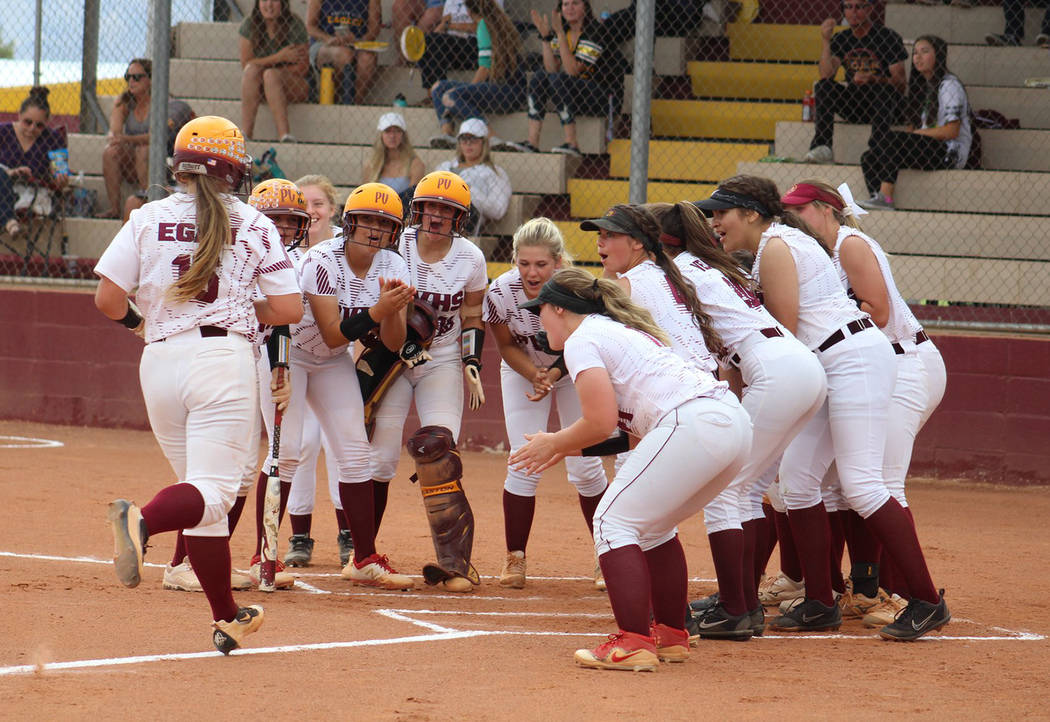 Cassondra Lauver/Special to the Pahrump Valley Times Freshman Deeanna Egan is greeted by Pahrump Valley teammates at home plate after crushing a 3-run home run during the first inning of Wednesday's 9-5 victory over Boulder City at Floyd Field in Pahrump. 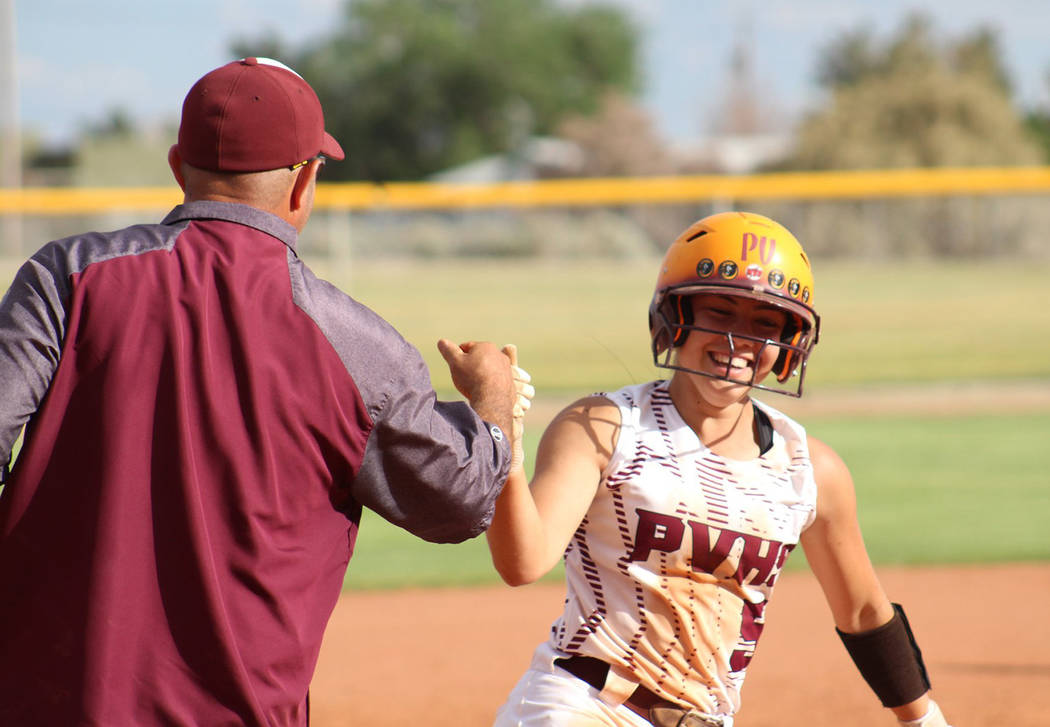 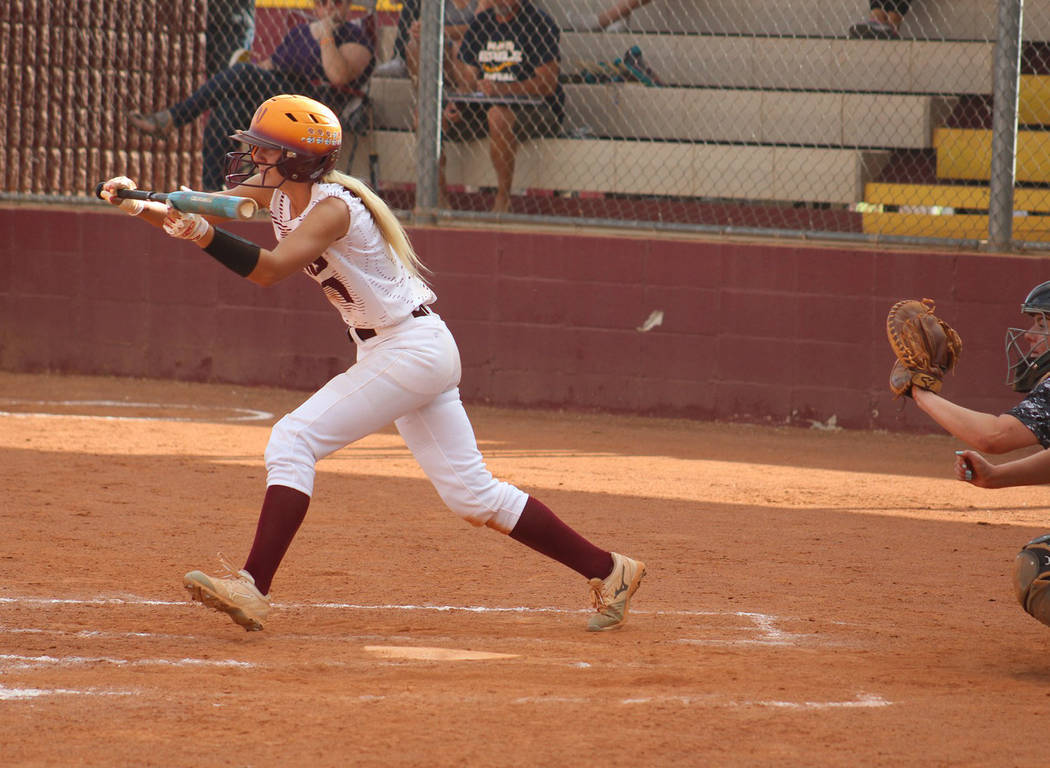 Cassondra Lauver/Special to the Pahrump Valley Times Pahrump Valley leadoff hitter Tereena Martin squares around to bunt during the Trojans' 9-5 region tournament victory over Boulder City on Wednesday in Pahrump.

But concerned or not, it was very satisfying to see just how quickly the Trojans answered.

Dee Dee Egan followed Kareena Nelson’s RBI single with a 3-run home run over the fence in left to give the Trojans a 4-2 lead, and they went on to post a 9-5 victory over their old rivals at Floyd Field.

“We talk about that a lot, just punching back,” Lauver said.

“It was a very inside pitch, inside below the knee, and I thought I was just going to pop it up because that’s what I usually think every time,” Egan said. “But it just went out, unexpected.”

Egan wasn’t done for the day, drilling a run-scoring double to the fence in right field in the sixth inning that pushed the lead to 6-3.

“At the beginning of the season I was having a hard time, but then my bat path finally came around and now I’m hitting well again.” Egan said.

Junior second baseman Skyler Lauver also belted a home run, going 3-for-4 for the day with 2 RBIs and a run.

“I’m really happy with how I’ve been doing,” Lauver said. “For a minute there my bat path wasn’t the best. I was still getting on base, but I wasn’t hitting as high of a slugging percentage as I was hoping for, and now I’m starting to hit more doubles, and the home run was nice.”

The Trojans tagged Boulder City pitcher Abby Giunta with 12 hits, scoring 3 times in the bottom of the sixth to put away the game after the Eagles had pulled within 6-5.

The game marked the second time the old rivals have met this season. The first time around, the Eagles took leads of 7-0 and 9-1 before the Trojans rallied with 10 runs in the bottom of the sixth and went on to a 14-10 victory.

Needless to say, a lot has changed since that March 11 contest in Pahrump.

“I feel like our pitchers have grown a lot this season,” Cassondra Lauver said. “I think they’ve gained a lot more confidence in themselves, and they’re hitting their spots much better. They’ve gained some speed and some accuracy.”

“I have to admit they did get in my head in that first inning, but I believe in myself and battled back,” Cuellar said. “I feel confident that I can just keep pitching and it will turn out really good.”

That trait is no accident, but the end result of an approach to the game that makes every at-bat throughout the season a teachable moment.

“We want to play our best every time,” the first-year varsity head coach said. “We try to simulate a 1-0 ballgame. We’re going to play it like a 1-0 ballgame. It can be hard to do during league games, but our coaches do a good job of making every single moment intense. The whole purpose of that is preparing them for these moments.”

Combining that attitude with some challenging competition outside of the Class 3A Sunset League is designed to pay dividends during the postseason.

“We were having a rough time for a minute there in the middle of the season, and it was starting to get in our heads a little bit, but then we went over and played Bishop Gorman,” Skyler Lauver recalled. “That was kind of the breaking point when we finally came back around.

“Playing 4A teams has made 3A seem like a breeze. I was kind of nervous for Boulder, and yes they fought pretty hard, but it wasn’t something we weren’t used to after playing those 4A teams.”

“I feel like we can do anything if we put our mind to it,” Cuellar said. “It’s everything, our heart, our spirit, how great we play together.”

And their coach, whose staff has done a lot to infuse that belief, is delighted to hear that kind of talk.

“The girls are pretty solid in knowing what they’re capable of doing, and they have a lot of confidence in the game that they play,” Cassondra Lauver said.

The victory put the Trojans (25-11) into Thursday’s winners bracket final at Moapa Valley (21-6). The winner of that game gets today off, moves right into Saturday’s region finals in Pahrump and clinches a berth in the state tournament. The loser will play the survivor of losers bracket games among Boulder City, Mojave, Chaparral and Virgin Valley at 4:30 p.m. Friday for a state tournament berth and the right to face the winners bracket champion for the region title Saturday in Pahrump.

Pahrump Valley 12, Virgin Valley 2: On Tuesday, Terrena Martin went 3-for-3 to lead a 13-hit attack as the Trojans defeated the Bulldogs in five innings in their region tournament opener.

“I feel like we were a little bit on the nervous side, not necessarily because of who we were playing but just it’s the first playoff game and we’re hosting regionals and that kind of got in our stomachs a little bit,” Cassondra Lauver said. “I was pumped up and a little bit nervous.”

Skyler Lauver was 2-for-2, and Jackie Stobbe went 2-for-3 for Pahrump Valley.