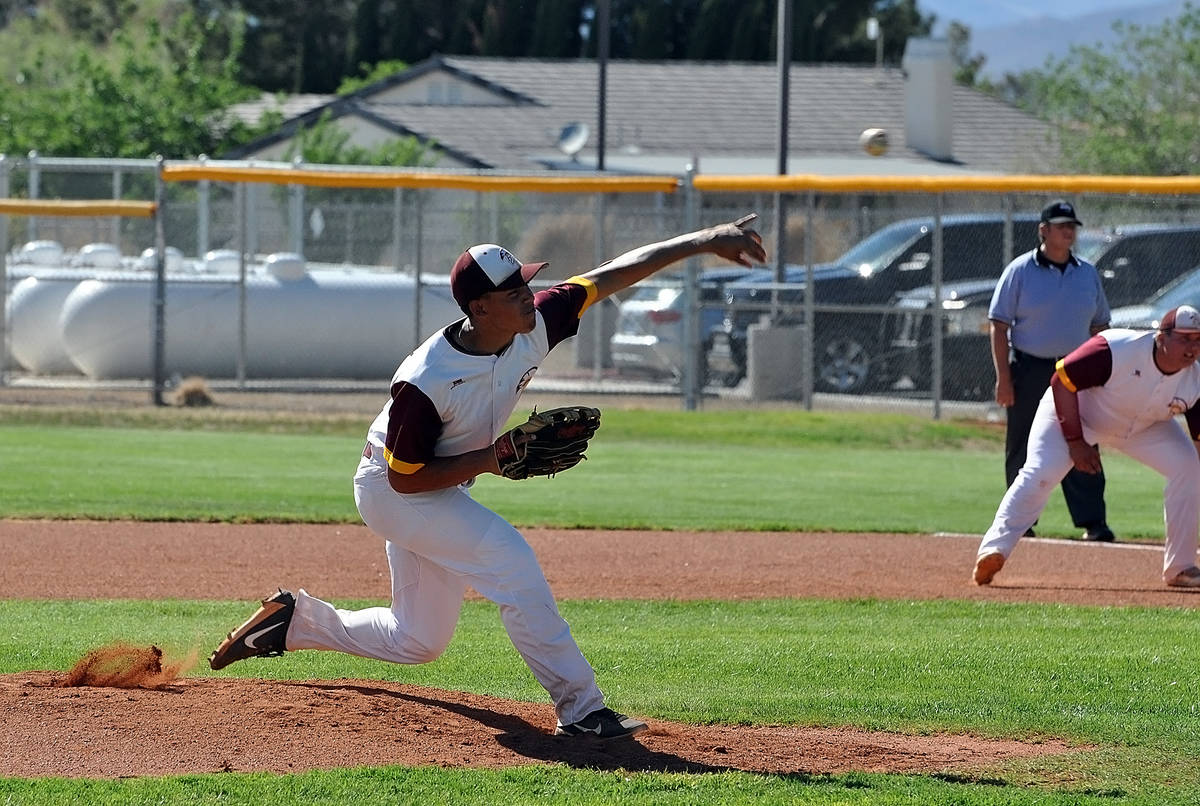 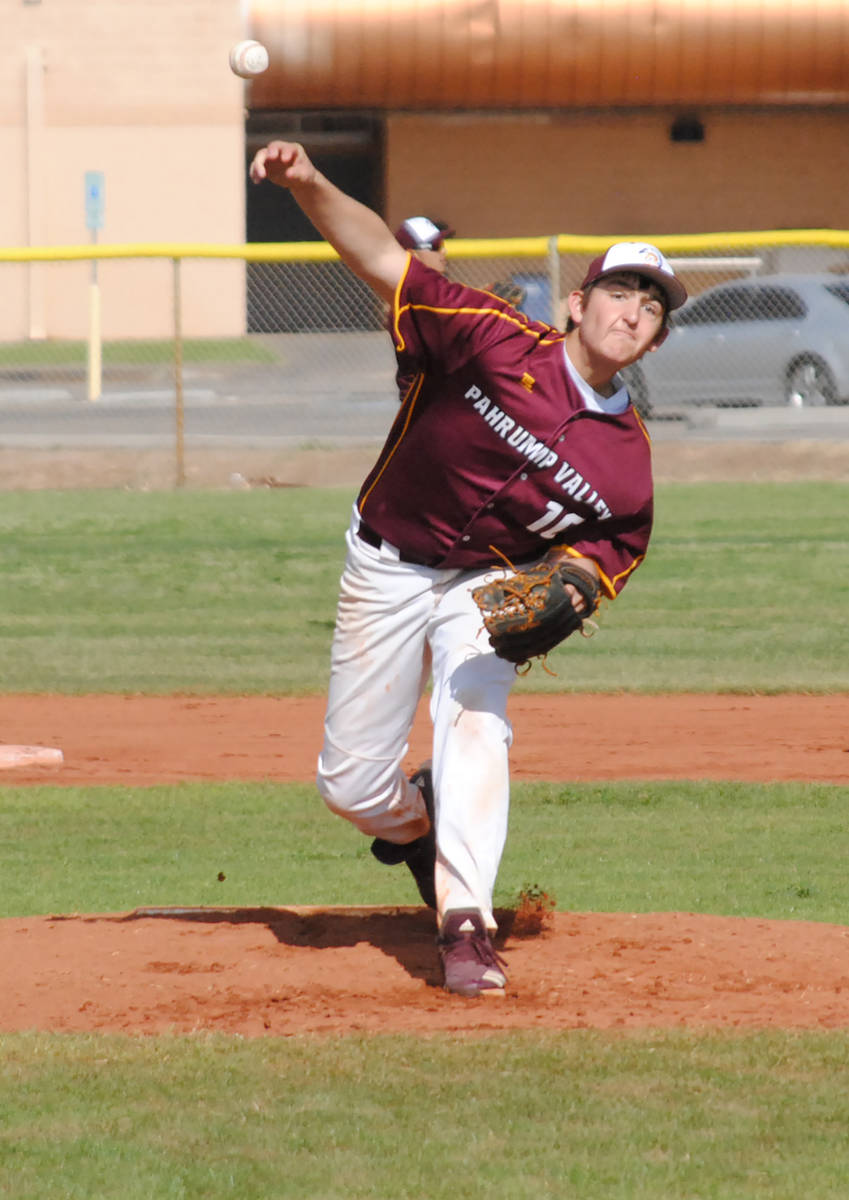 File photo Jake Riding, shown pitching for Pahrump Valley High School in 2019, was a tough-luck losing pitcher Friday night, tossing a complete game with 7 strikeouts without a walk while going 2 for 2 with 3 RBIs in Trojan Gold's 4-3 loss to Palo Verde.

Trojans coach Drew Middleton said the 1-run loss to a strong Palo Verde team was frustrating because of the inability to capitalize on opportunities.

“What beat us in the end was the inability to get timely hitting with runners in scoring position,” Middleton said, noting the Trojans struck out looking five times with runners on second and third. “We left a runner at third in every single offensive inning. We just couldn’t get that one hit.”

Riding did everything he could against Palo Verde, tossing a complete game with seven strikeouts without a walk while going 2 for 2 with 3 RBIs.

The first two RBIs came in the opening inning, as James Metscher walked and Sterling Oshiro was hit by a pitch to start the game for the Trojans. A double play appeared to get Palo Verde out of trouble, but Denton drew a walk to set up Riding. In the third, Denton again walked and Riding again drove him home, but by then Palo Verde had used five singles and a walk to push across four runs during the second inning.

“We played a really good game against a really good team,” Middleton said. Palo Verde will be in Class 5A for baseball if there is a spring season.

The second game was a different story, as the Trojans erupted for 7 runs in the third inning and 6 runs in the fourth inning against Sierra Vista. Four players scored in each of those innings as Pahrump used timely hits to take advantage of walks to produce the big innings to back Denton, who struck out eight and walked one.

Kyle McDaniel went 2 for 3 with a double and 3 RBIs for the Trojans, while Metscher reached base in all three plate appearances and scored 3 runs. Middleton was pleased that he was able to get freshman Austin Sandoval an inning at catcher, he also scored twice and drove in a run (the game’s format meant all 12 players were in the batting order).

The games marked the first competition for the Trojans since a positive COVID-19 test kept them off the field late last month.

“After having two weeks off and only having one practice in that two-week span, I was proud of our guys and the way they competed,” Middleton said. “Overall, our pitching once again dominated, got ahead of hitters all night with first-pitch strikes and mixed up all of their pitches really well.

“Defensively, we were stellar with only one error on the night. Offensively, it took a little bit for us to get going, but it was nice to see us explode in the second game.”

Four nights later, Trojans Gold played the first of two doubleheaders to make up games lost to COVID-19. On Tuesday night, they split two games with Foothill, losing the opener 8-7 and winning the late game 7-3.

The Trojans did all of their scoring during the first two innings, including a 5-run second inning which featured run-scoring singles from McDaniel and Coby Tillery. But while they continued to put runners on base, the key hit eluded them the rest of the way.

“Just like last week, we kept getting guys on but we could not get that one hit to drive in insurance runs,” Middleton said.

Foothill scored 4 runs in the second inning off of starter Fidel Betancourt, pushed across a single run in the third and then came from behind with 3 runs in the fifth. With Pahrump not scoring over the final three innings, it was enough.

“We just didn’t play to our potential in the first game, and we knew it,” Middleton said.

The second game was a different story. This time it was Foothill that started well, coming up with three runs off of Jalen Denton, who labored through a 31-pitch inning with 2 walks and 2 wild pitches.

But Denton settled in and went the distance, striking out six in the remaining four innings. (League games are on a time limit.) Meanwhile, the offense went to work. The Trojans scored twice in the second on a 2-run single by Ryan Braithwaite, then taking advantage of sloppy play from Foothill to score twice in the third.

Then, in the fifth, a walk and two hit batters set the table, and Riding’s 2-out, 2-run single blew open the game. He finished with 2 hits, 3 RBIs and a run, while Oshiro stole two bases and scored twice.

“Defensively, we looked a lot more like ourselves and played more sound baseball,” Middleton said of the second game. “Offensively, we did a better job of putting the ball in play and making Foothill make plays.”