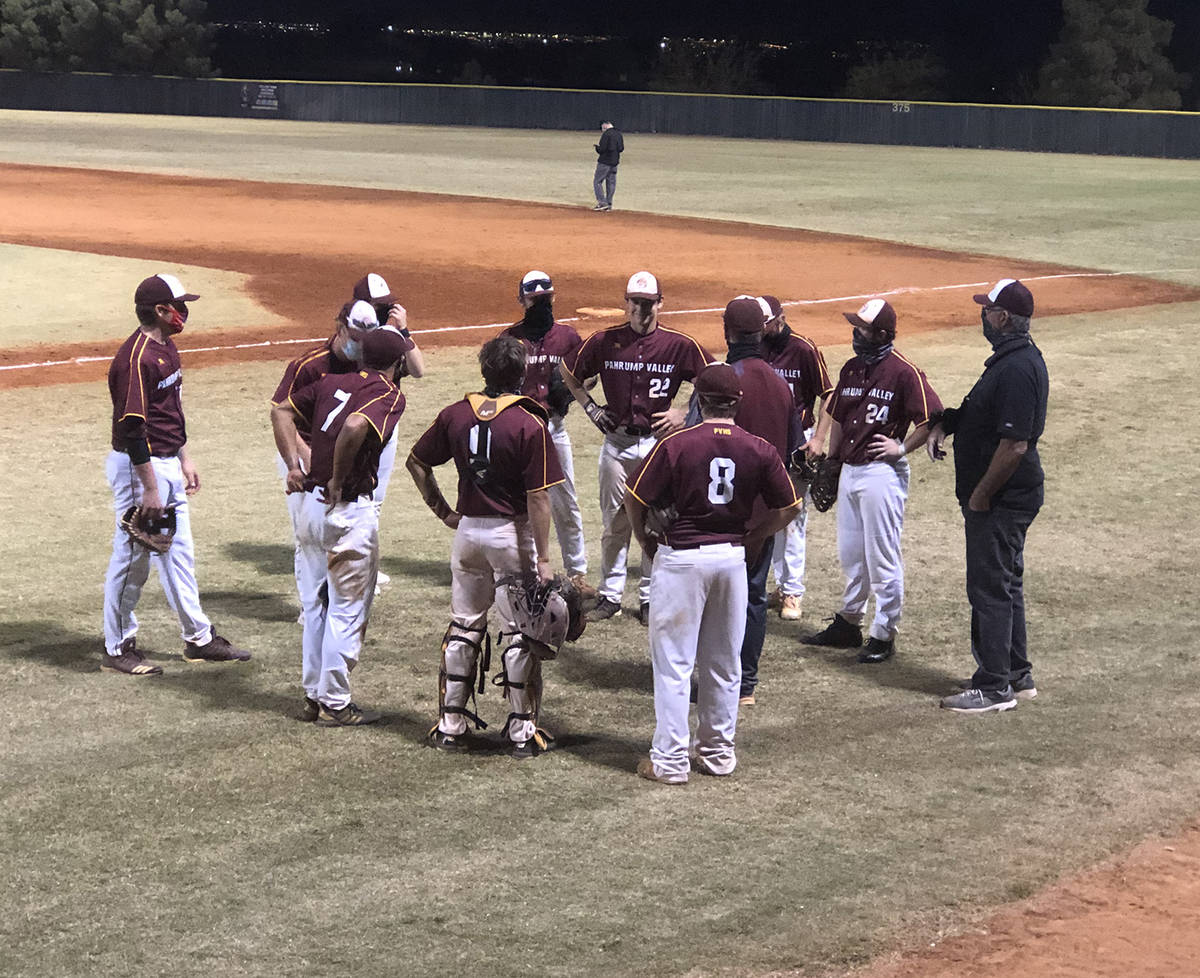 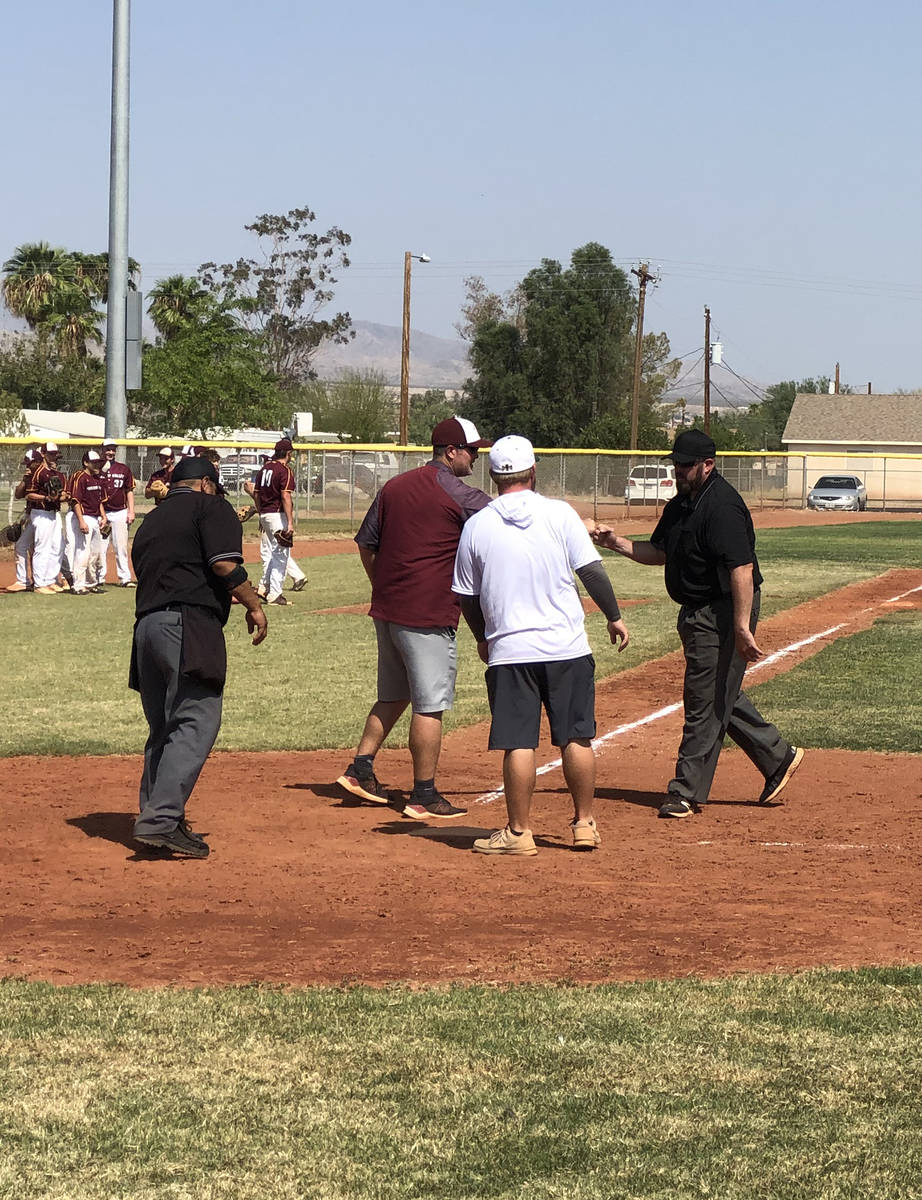 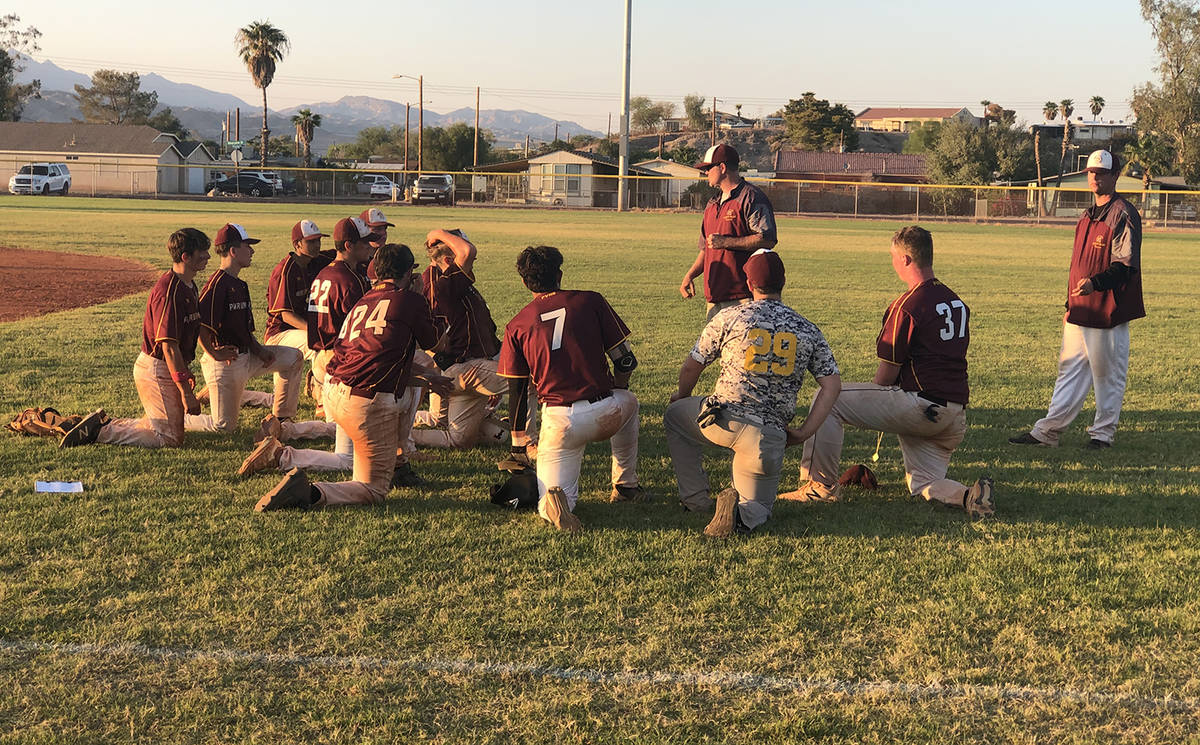 Tom Rysinski/Pahrump Valley Times Shadows get longer after a long day of tournament baseball, with Pahrump players gathered for a postgame chat from coach Brian Hayes at Rotary Park in Bullhead City, Arizona.

The unfortunate victim of that combination was Tech, which wound up on the losing end of 10-0 and 14-3 scores in the final Vegas Valley Baseball League games of the season at Arroyo Grande Sports Complex in Henderson.

Jake Riding went the distance for six-inning no-hitter. Riding struck out 10, throwing just 64 pitches and hitting one batter for Tech’s only baserunner.

“He was just dominant,” coach Drew Middleton said. “Jake was near-perfect this fall on the bump.”

And he pitched without pressure, as the Trojans put away the game early, exploding for 9 runs during the first two innings.

Kyle McDaniel went 3 for 4 with a triple, 2 RBIs and 3 runs; while Jalen Denton went 3 for 3 with 2 RBIs and 2 stolen bases. Zach Cuellar also had 2 steals for the Trojans, who finished with six.

Game 2 saw the Trojans score in every inning but one. McDaniel and Denton each had 3 hits again, with McDaniel belting a triple, scoring 3 runs and driving in one while Denton posted 3 RBIs and 5 stolen bases. Riding finished 2 for 3 with a double, 3 RBIs and 2 runs, and Fidel Betancourt went 2 for 3 with a steal and 2 runs.

The wins gave the Trojans a 7-4 record in a competitive league filled with teams that will play at the 4A and 5A levels this spring, pandemic permitting.

“Overall a good way to end our fall season,” Middleton said. “We got to face some high-level talent, and we showed we can compete at that level. I’m extremely proud of the way our players battled through a unique year. Even through the challenging circumstances, they worked their butts off and got better individually and grew as a team.

“There’s a lot to build off of heading into the high school season.”

Simply getting onto the field was a victory and vitally important for most baseball programs.

“Missing out on a whole high school season was huge,” said Middleton, an assistant coach for the high school team, which had its season end after four games because of COVID-19. “To be able to get on the field and play 19 games this fall — 11 from this league and eight from the Bullhead tournaments — was huge. I think what we learned is how high our potential can really be.

“We showed we have the talent, pitching, defense and at times offensive explosion to really compete with anybody in the state. We aren’t deep number-wise, but we are deep in the fact we have multiple kids we can plug and play anywhere on the field. We have four middle infielders we can plug in and have confidence they can make any play. We have five outfielders we trust can run down balls and throw people out. Those are just examples.”

The Nevada Interscholastic Activities Association tentatively is planning for a spring sports season that will begin with practices April 3, competition beginning April 16 and the season ending May 22. But the NIAA has said that if students are not in school in at least a hybrid learning model, sports will not be played. The Clark County School District already canceled its spring sports season, a decision that covers all CCSD schools except Moapa Valley.

But for now, baseball season will be condensed, not eliminated, and teams will start preparing for it.

“We are taking the rest of the month off,” Middleton said. “In January, we are planning to start off light and focus mainly on conditioning while stretching out our arms. We are going to find ways to get better while we wait and see what happens with our high school season.”