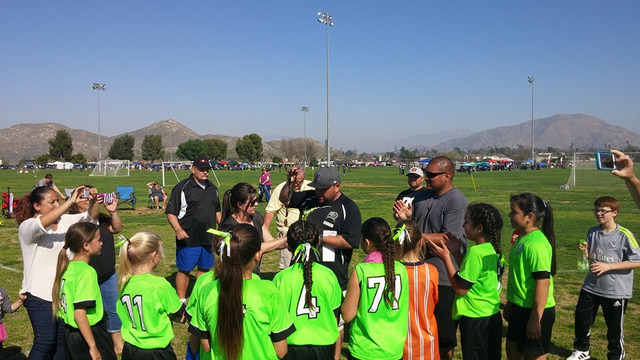 Following any big victory is the obligatory post-celebration.

Coaches and parents last week treated the soccer team to Pahrump’s Tropical Smoothie for a few rounds of soft drinks and a meal.

Still overwhelmed about their astonishing feat, the team found time to share their collective feelings about the victory.

Playing middle defense, Paris Coleman admitted to a bit of nervousness before the championship match.

“I’ve been playing since I was 5 years old, but on our way there, I was very nervous because I didn’t know if we are going to win or not and it was awesome that we did win,” she said. “I think we’re going to do good for our final tournament. I scored one goal in the championship game.”

Though goalkeeper Avery Moore didn’t score a goal in the match, she was still elated the team came out on top.

“I am so happy that we won,” she said. “I did pretty good but I didn’t score any goals. I was also nervous thinking about the tournament and I wasn’t sure if we were going to win or lose. I’m ready for the next tournament. I love the coaches.”

At left forward, Andrea Sauceda was equally joyous with her team’s fortunate outcome.

Meanwhile, Emily Lewis, who did score a goal, talked about her thoughts prior to the match.

“I was a little bit nervous on the way to California,” she said. “I always get nervous before the games, but I’m really looking forward to going to Arizona next month.”

Grace Miller spoke of her accomplishment during the competition.

“I scored one goal and that was really fun,” she said. “I kicked it down, the keeper dropped it and I kicked it in.”

Katerina Crow said she too was able to put the ball in the net more than once during the season.

“I was so very happy that I scored a goal too,” she said. “I scored a lot of goals this season and it was really neat.”

Dayanara Bautista is in her third year of playing soccer in Pahrump.

“I practice a lot,” she said. “I’m the top goal scorer for the team. I’m looking forward to going to Arizona next month.”

Silla Niles noted she plays not just to compete with the other teams.

“I play soccer because I really like it,” she said. “I really, really want to win the next tournament and I hope we can.”

Kailani Martinez talked about her future plans in the sport.

“I think I did pretty well this year, but I didn’t score any goals,” she lamented. “I play left defense and I want to continue soccer when I get into high school.”

Scott Lewis attends all of the soccer matches and practices when he is able.

As the father of Emily Lewis, he too confessed to having a bit of uncertainty while traveling to the California tournament, due to the sheer gravity of the event.

“I have to admit I was a little nervous on our way, because they’re representing not only the team, but also the entire community of Pahrump, as well as the state of Nevada,” she said. “It was a lot of pressure on the kids but Coach Coleman and the other coaches did a really good job in preparing them. They have been playing in some very tough tournaments and I think that they had all of the tools as well as a plan in place.

They went down there and represented the town of Pahrump and Nye County very well.”

Lewis also mentioned what occurred at the soccer complex when it appeared the underdogs, Pahrump United, would take down a very talented opponent.

“I saw more folks that were just down there watching from different groups and cheering us on toward the end,” he said. “It was an unbelievable success story with this group of girls. Pahrump historically never really made it to that level and here we have 10 year-old girls that just excelled in every way and we are just so very proud of them.”

The team’s victory also drew the attention of District 36 Assemblyman James Oscarson, who stopped by the celebration to congratulate the team.

“It is special that we have a group of kids in this community that are dedicated to their sport and have great coaches and great parents who are all here supporting what they do and making the community look great,” he said. “It really doesn’t get any better than that.”

As a pledge of his support for the team and its accomplishment, Oscarson provided a contribution to the squad for next month’s match in Bullhead City, Arizona.

“I made a donation because the kids have to have snacks and things while they are traveling,” he said. “So I decided to help out a little bit with that. It’s really all about the kids and what they do for our community as well as boosting us up as adults to make us know that our efforts are worthwhile. I’m grateful to be here tonight.”