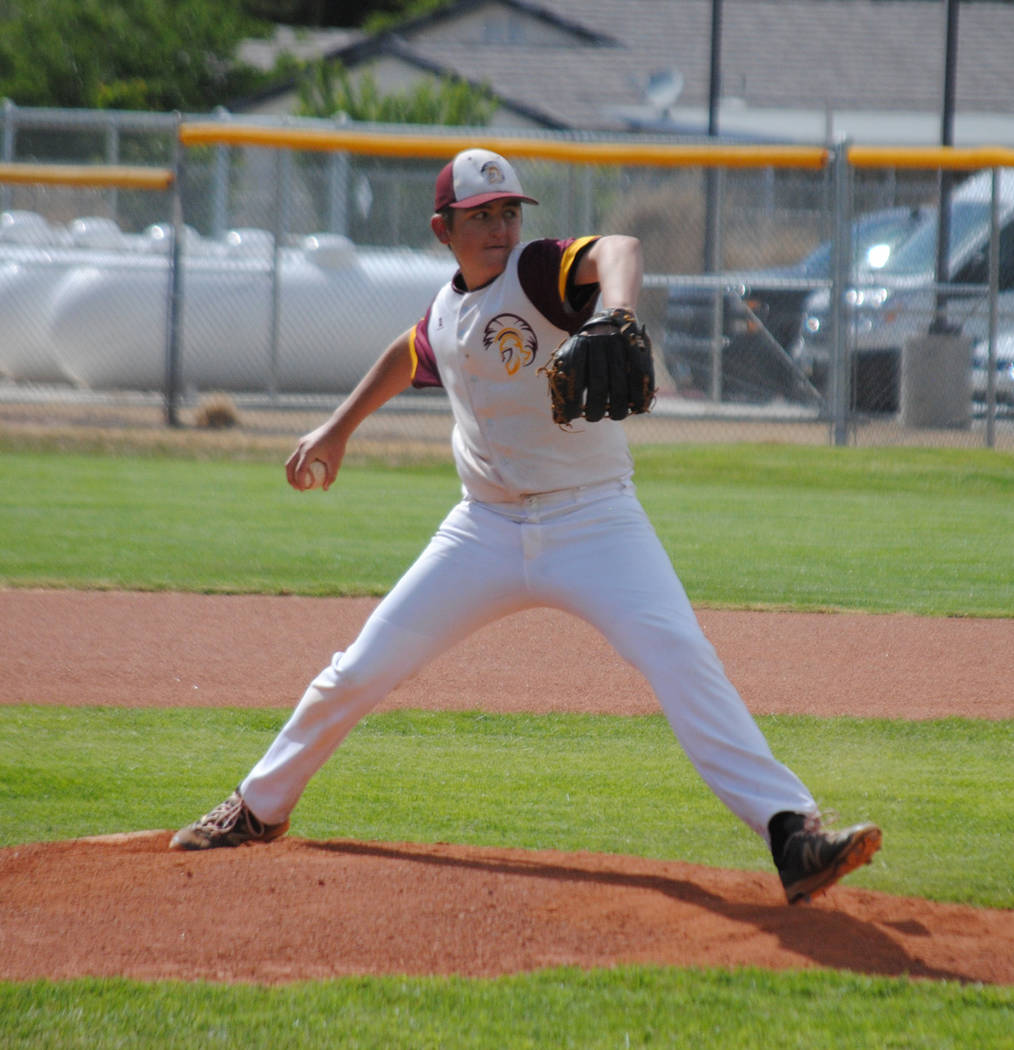 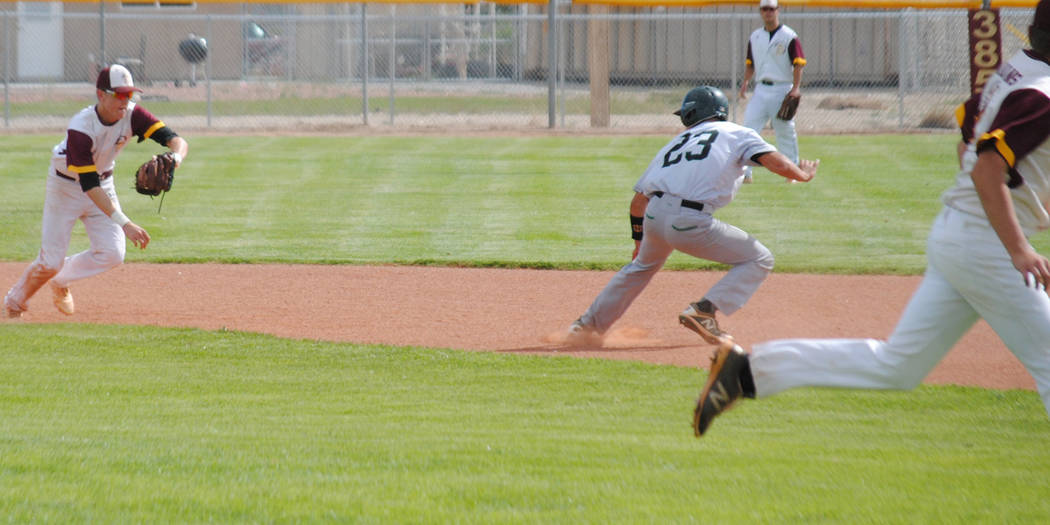 Charlotte Uyeno/Pahrump Valley Times Pahrump Valley's Chase McDaniel, left, chases Virgin Valley's Bridger Toone back toward first base during Tuesday's region tournament game in Pahrump. The Trojans got the out on the play and won the game 7-4. 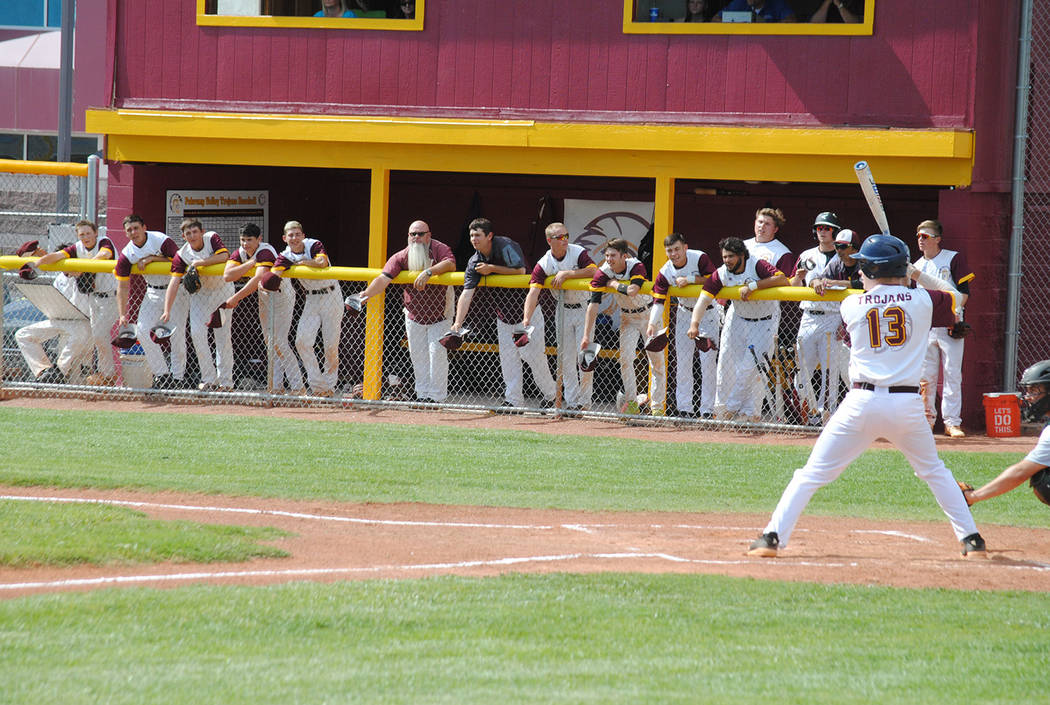 Charlotte Uyeno/Pahrump Valley Times The Pahrump Valley bench has the rally caps out as Cyle Havel steps up to the plate Tuesday against Virgin Valley.

Last year, the Pahrump Valley High School baseball team had to go through the losers bracket at the Class 3A Southern Region Tournament to reach the state tournament. After Wednesday’s game against Boulder City, the Trojans will have to do it again, this time playing one more game along the way.

Blaze Trumple ripped an 0-2 pitch over the fence in left field for a 3-run home run to cap a 4-run ninth-inning rally that carried Boulder City to their second win this season over Pahrump Valley, a 7-3 triumph at Rod Poteete Memorial Field in Pahrump.

Boulder City moved on to Thursday’s winners bracket final against Moapa Valley, an 11-0 winner over Del Sol on Wednesday. Pahrump Valley hosted Chaparral, a 16-3 winner over Valley on Wednesday in the losers bracket, in an elimination game Thursday.

For a long time, the idea of either team scoring 7 runs seemed preposterous, as Eagles starter Scott Bahde and Trojans starter Cyle Havel traded 4 scoreless innings after the teams finished the third tied 3-3.

When a one-out double in the seventh against Havel and a one-out triple in the eighth off of reliever Joey Koenig failed to lead to runs, it looked as if the Eagles eventually would pay for not taking advantage of opportunities. But an error to open the ninth was one too many situations for the Trojans to escape.

“We battled out of a couple spots and had a couple ourselves, and it boiled down to which team was going to do the job when they needed to,” Pahrump Valley coach Brian Hayes said. “They did, and we didn’t.”

The Trojans’ defense bailed them out a couple of times. In the fifth, the Eagles had a runner at third base with nobody out wander too far on a ground ball to the infield. Third baseman Roman Roberts fired home, and when the runner tried to retreat to third catcher Willie Lucas fired the ball back for the tag. One batter later, shortstop Chase McDaniel and Koenig, then playing second, turned a perfect 6-4-3 double play to end the inning.

McDaniel forced a runner at third on a ground ball in the top of the seventh, helping ensure a one-out double did not lead to the tie-breaking run.

The Trojans had taken a 1-0 lead in the first when Koenig led off with a single, stole second and scored on a single by McDaniel. Those two forged another run in the third after the Eagles had taken a 3-1 lead, as Koenig singled, Jalen Denton followed with an infield single and McDaniel drove in Koenig with a single to right. But three consecutive ground ball outs kept the game tied.

The Pahrump Valley bench got fired up in the bottom of the seventh when Zach Trieb got his second hit of the game leading off the inning. Hayes sent Reace Millette in to run for Trieb as Roberts stepped into the box. Two attempts to move Millette to second via a sacrifice failed, and an ensuing strike-him-out, throw-him-out double play took the wind out of the Trojans’ sails.

“It seemed like we would get the first couple of guys on base and then get in one of those ruts,” Hayes said. “That last inning, Zach leads off with a single and then we can’t get a bunt down and our guy gets a bad jump and tries to steal. Honestly, that’s two huge mistakes for our team right there, and in the playoffs you can’t do that.”

After the Eagles’ ninth-inning rally, the Trojans opened their half of the inning with consecutive singles from Dylan Grossell and Tyler Floyd, once more injecting some energy into the fans and the bench. But Giunta, who relieved Bahde in the eighth, set down the next three Trojans to send the Eagles into the winners bracket final.

“We played a good, solid baseball game,” Hayes said. “They just did a bit more than we did. It would have been nice to be able to push something across in those innings when it was 3-3, but I’m sure they’re saying the same thing.”

Koenig, McDaniel, Floyd and Trieb each had 2 hits for the Trojans, who did not record an extra-base hit.

So Pahrump Valley finds itself in the losers bracket. A win Thursday over Chaparral (13-13), a team the Trojans handled easily 12-0 back on March 18 in Las Vegas, would have sent the Trojans (24-9) into a doubleheader today in Pahrump. The Trojans would face either Del Sol or Virgin Valley at 1:30 p.m., and a win there would send them to a 4:30 p.m. battle with the loser of Thursday’s Moapa Valley-Boulder City game in the losers bracket final.

The winner of the Moapa Valley-Boulder City game will face the losers bracket winner at noon Saturday in Pahrump for the region championship. A second game, if necessary, will follow.

“We’re going to have to win three now to get to Saturday,” Hayes said. Both the region champion and the runner-up will advance to the Class 3A State Tournament next week at Virgin Valley High School in Mesquite. “We just have to take it game by game.”

Pahrump Valley 7, Virgin Valley 4: On Tuesday, Jake Riding pitched 6 innings of 2-hit ball, and Trieb went 2-for-2 with a double and a run as the Trojans defeated the Bulldogs in the region tournament opener in Pahrump.

Tyler Floyd went 2-for-4 with an RBI and a run for the Trojans, who scored all 7 runs during a fifth-inning uprising.

“We pitched and played defense really well for five innings and then kind of lost our focus a little bit,” Hayes said of Tuesday’s game. “And that carried over a little today.”

Riding struck out two and didn’t walk a batter over 6 innings.

“Jake threw really well, our defense was pretty solid, and we got that timely hitting. One big inning of 7 runs, and that was the difference.”