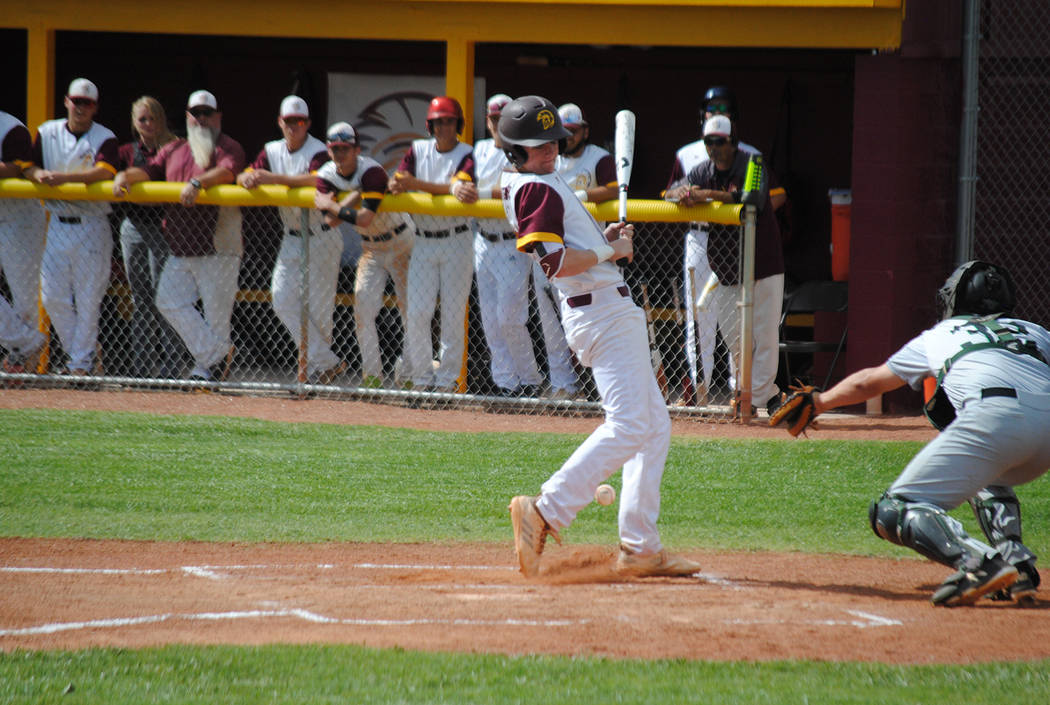 Charlotte Uyeno/Pahrump Valley Times Pahrump Valley's Chase McDaniel reacts to being hit by a pitch during a 6-1 victory over Virgin Valley on Friday in a Class 3A South Region Tournament elimination game in Pahrump. 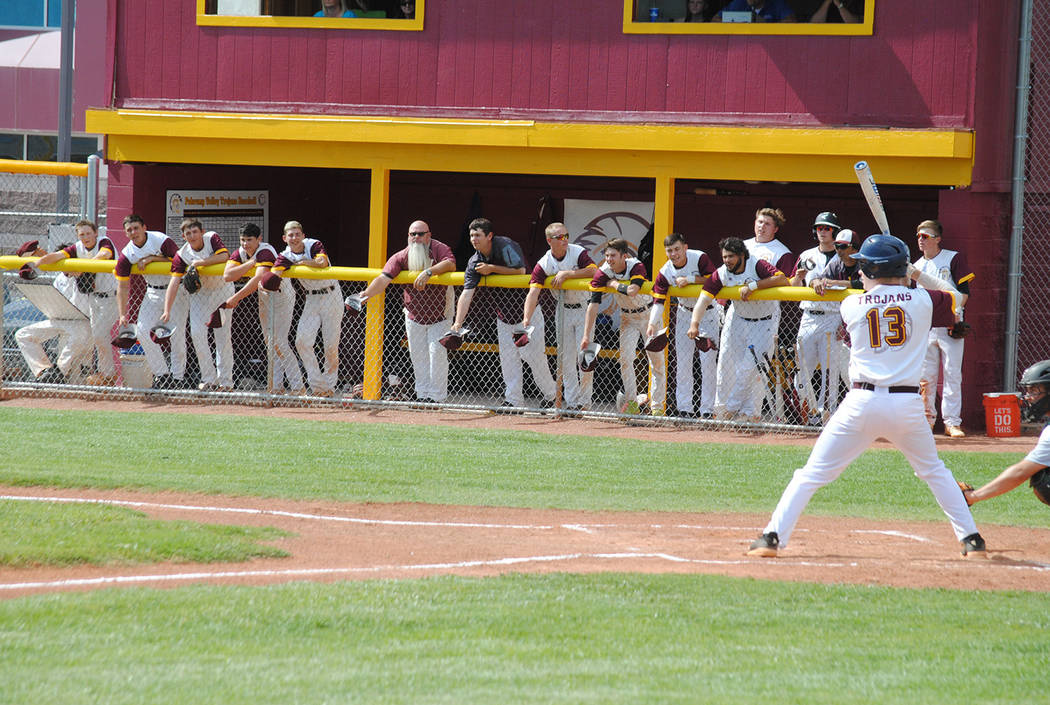 Charlotte Uyeno/Pahrump Valley Times The Pahrump Valley bench gets out the rally caps for Cyle Havel against Virgin Valley during the Class 3A South Region Tournament in Pahrump.

A second-round loss in the Class 3A South Region Tournament meant the Pahrump Valley High School baseball team had to win three consecutive games to return to the state tournament.

The Trojans came close. Very close. But in the end having to win three times in two days proved to be too high of a mountain to climb.

Kashten Frei’s double with one out in the top of the seventh inning plated Rylan Evans and Coby Longman with the tying and go-ahead runs and lifted Moapa Valley to a 6-4 win over the host Trojans in the losers bracket final on Friday at Rod Poteete Memorial Field.

The Pirates (19-10) advanced to Saturday’s finals against Boulder City (25-8). Despite sweeping the regular-season series from the Eagles, the Pirates lost to them for the second time in the region tournament, allowing six runs in the bottom of the seventh and losing 8-7.

Willie Lucas was 2-for-2 with two RBIs for Pahrump Valley, which finished 26-10.

The Trojans had played two crisp games to get to that point. First, Jalen Denton tossed six solid innings, yielding two runs with five strikeouts to propel the Trojans past Chaparral 7-2 on Thursday.

Tyler Floyd was 2-for-2 with two runs, and Lucas was 2-for-4 with an RBI. Chase McDaniel supplied two hits and a run, and Zach Trieb provided a two-run single for the Trojans.

In the first game Friday, Denton was 2-for-2, and the Trojans scored all of their runs in the fifth inning in a 6-1 victory over Virgin Valley to eliminate the Bulldogs for the second consecutive season.

Roman Roberts tossed a seven-hitter and struck out two for Pahrump.

Jesse Jones tossed a five-inning no-hitter and struck out 14 to lead Pahranagat Valley to a 10-0 win over Beatty in the opening round of the Class 1A Southern Region playoffs on Thursday at Indian Springs High School.

Austin McKenzie went 2-for-3 and scored twice for Beatty, while Brayden Lynn went 2-for-2 and drove in a run. Juan Lopez and Fabian Perez also drove in runs for the Hornets, who finished 8-10.