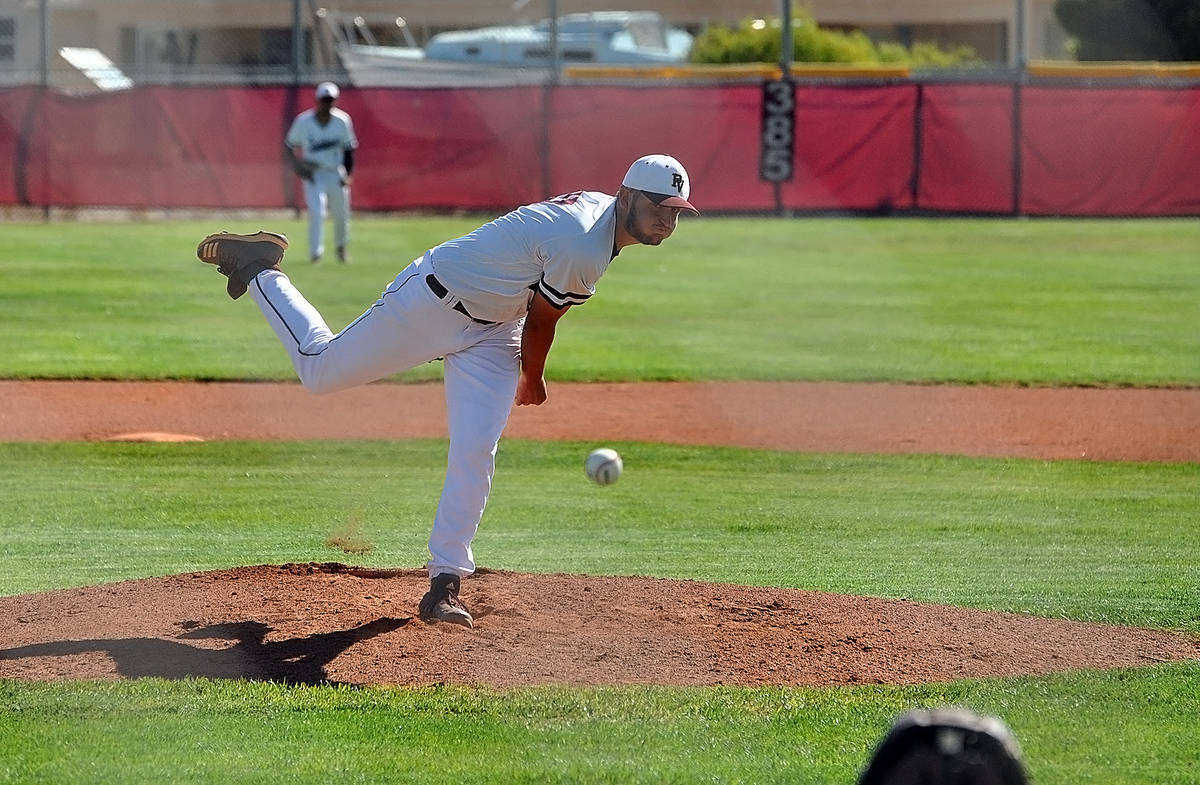 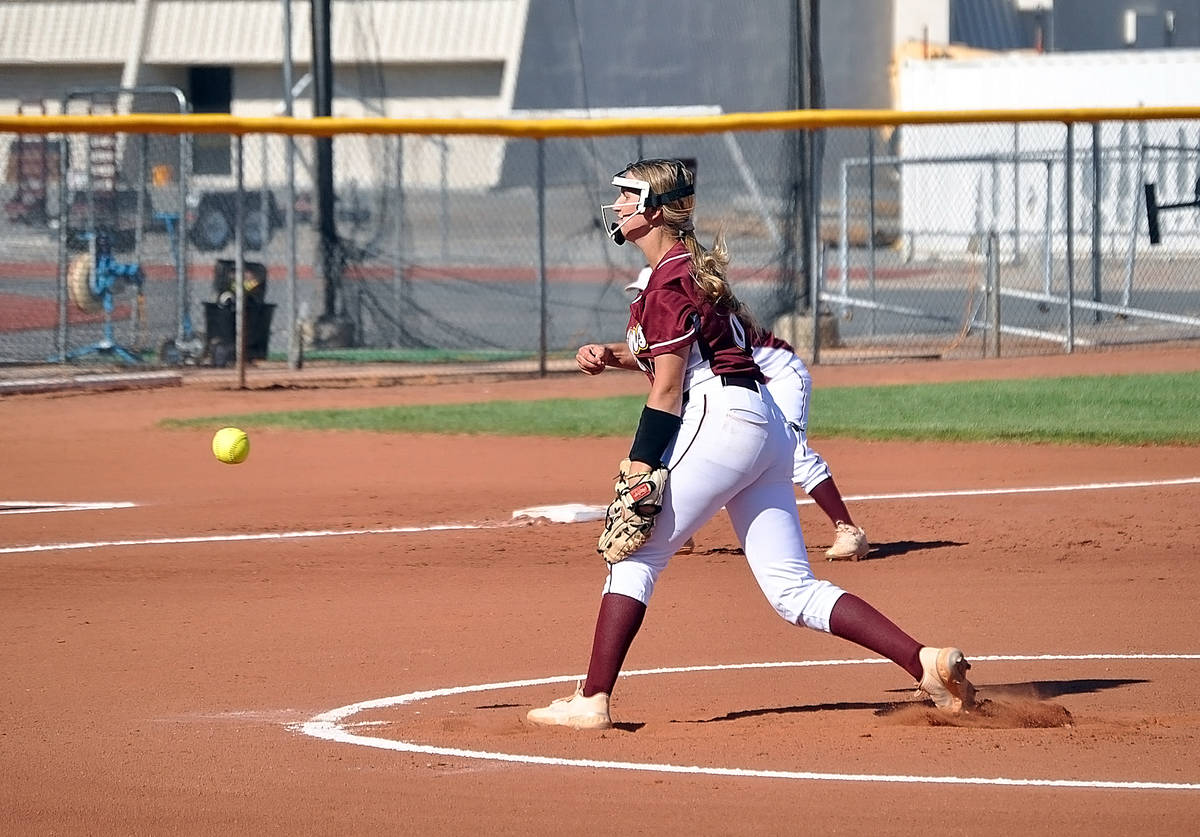 Horace Langford Jr./Pahrump Valley Times Senior pitcher Ciara Stragand allowed 3 hits without a walk over 4 innings Tuesday as Pahrump Valley rolled to a 15-0 win over SLAM Nevada in the first game of the Class 3A Southern Regional Tournament at Floyd Field. 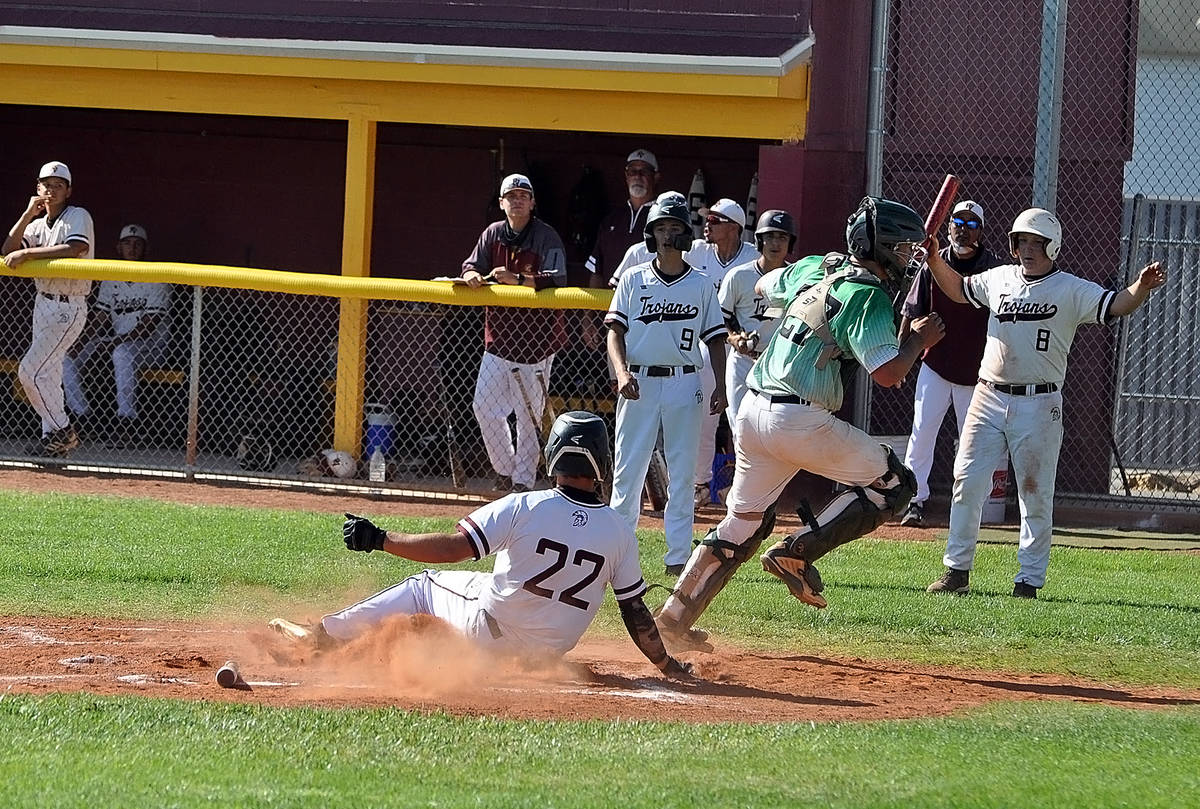 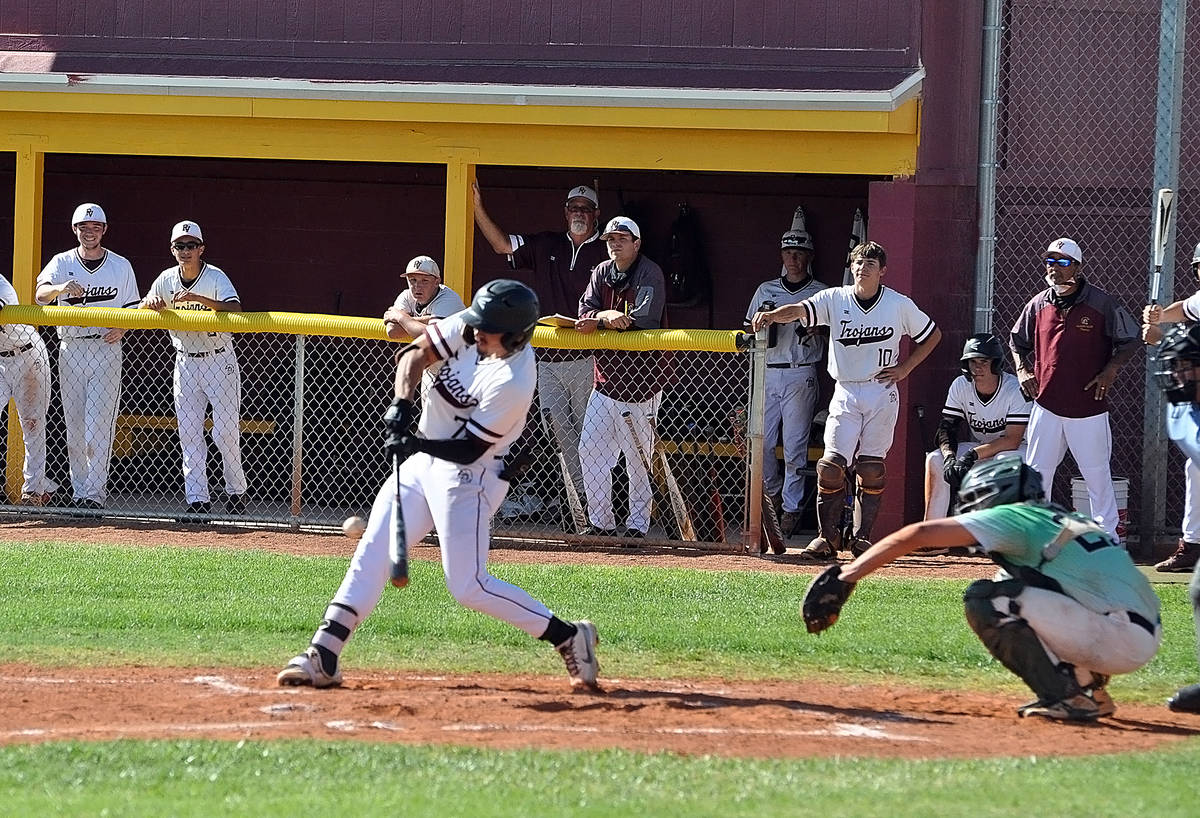 The mission Wednesday for the Pahrump Valley High School baseball and softball teams was simple: Beat teams they had handled easily earlier in this season to go into Friday’s play needing a single win to reach the regional final.

And while the last outs proved elusive, both sets of Trojans accomplished their missions.

On Floyd Field, the softball team totaled just 4 hits but parlayed them and 6 errors into a 7-0 lead, then held on during a harrowing seventh inning to post a 7-4 win in the second game of the Class 3A Southern Region Tournament.

Next door at Rod Poteete Memorial Field, the baseball team was cruising behind Jalen Denton, who faced one batter more than the minimum through 4 innings with 6 strikeouts as the second-seeded Trojans took a 12-0 lead. But an infield single, a walk and two hit batters led coach Brian Hayes to summon relief help, and Ryan Braithwaite recorded the final two outs to preserve a five-inning 12-2 victory.

Braithwaite put the Trojans over the mercy rule hump with a bases-loaded double to left in the fourth. Pahrump Valley mounted a two-out rally with a walk to Denton, an RBI single by Jake Riding, a single by Zach Cuellar and a walk to Coby Tillery to bring up Braithwaite.

“That hit in the last inning from Ryan was a big hit because we didn’t get that yesterday,” Hayes said, referring to a 10-0 win over Virgin Valley in the tournament opener. “We scored 10 runs in the first two and then didn’t score again. We face good pitching, we’re not going to be getting three or four runs an inning, and it’s going to be how are we going to finish.”

How they started was similar to the day before, as the Trojans took an 8-0 lead after 2 innings. Kyle McDaniel doubled and scored in the first and hit a 2-run single in the second to highlight the eruption, with Denton and Riding getting RBI singles in the second and Denton, Cuellar and Tillery each driving in runs with “productive outs,” as coaches like to say.

Meanwhile, Denton was cruising along, retiring the side in order in the first, starting a double play that erased a single in the second and striking out the side in the third. A 2-out single proved meaningless in the fourth, and then things started to go wrong as the Trojans needed to keep the third-seeded Pirates from scoring 3 runs in the fifth to finish the game.

“I probably would have left him in and let him battle out that last inning, but we’re trying to keep the pitch count down for Saturday,” Hayes said of Denton. “He only threw 60 pitches, so we’ve got him for another 90.”

Saturday is a potential regional championship game. The good news for both today and Saturday is that the Trojans have plenty of pitching options.

“We have Scott (Hirschi), we have Fidel (Betancourt), we have Kyle, we can throw Ryan again,” Hayes said. “We’re pretty much set. For Saturday, we’re set pretty well, too, because we can bring Jake back on full rest. He can throw as many pitches as we want on Saturday. If we need to throw him Friday, we can bring him back, and if we don’t, we have him for Saturday.

“We’re in a really good position. Jake threw 60 pitches (Tuesday), Jalen threw 60 today, Ryan threw maybe 10, and Ryan’s got one of those arms where he can throw every day of the week and be fine.”

Offensively, the entire order chipped in against the Pirates, with eight players scoring and six players driving in runs. No. 7 hitter Braithwaite and No. 8 hitter Hirschi each doubled, and leadoff hitter James Metscher scored twice, as did McDaniel, Riding and Cuellar.

Meanwhile, Rily shut down the Pirates for 6 innings, with the Trojans getting 4 runs during the third inning to take control. But the game never got out of hand, meaning the bizarre Moapa Valley rally in the seventh made things a bit too interesting.

“We played a great game today up until that tiny smidgen of a moment,” softball coach Cassondra Lauver said with obvious relief.

That the Trojans survived the wild seventh is a credit to Rily for not allowing the Pirates to score at all over the first six.

“Ally always shines in her own way,” Lauver said of her pitcher. “She’s focused and composed and has gotten very good at not allowing outside influences to break her focus.”

With only two or, as unlikely as it is, three games remaining in the season, Lauver continues to preach what she always preaches.

“The big thing in my brain is I’m focused on making these girls better athletes in the short amount of time we have,” she said. “Of course we want to win. But all of the lessons that are involved in getting to that point … we want to deserve to win. All of our hard work, every little moment when we grinded it out when other people took days off, or we sweated it out, yes it’s hot, but guess what, we’re going to practice anyway. All of these tiny details are what helps us become a champion-style team.

“I want us to deserve to win.”