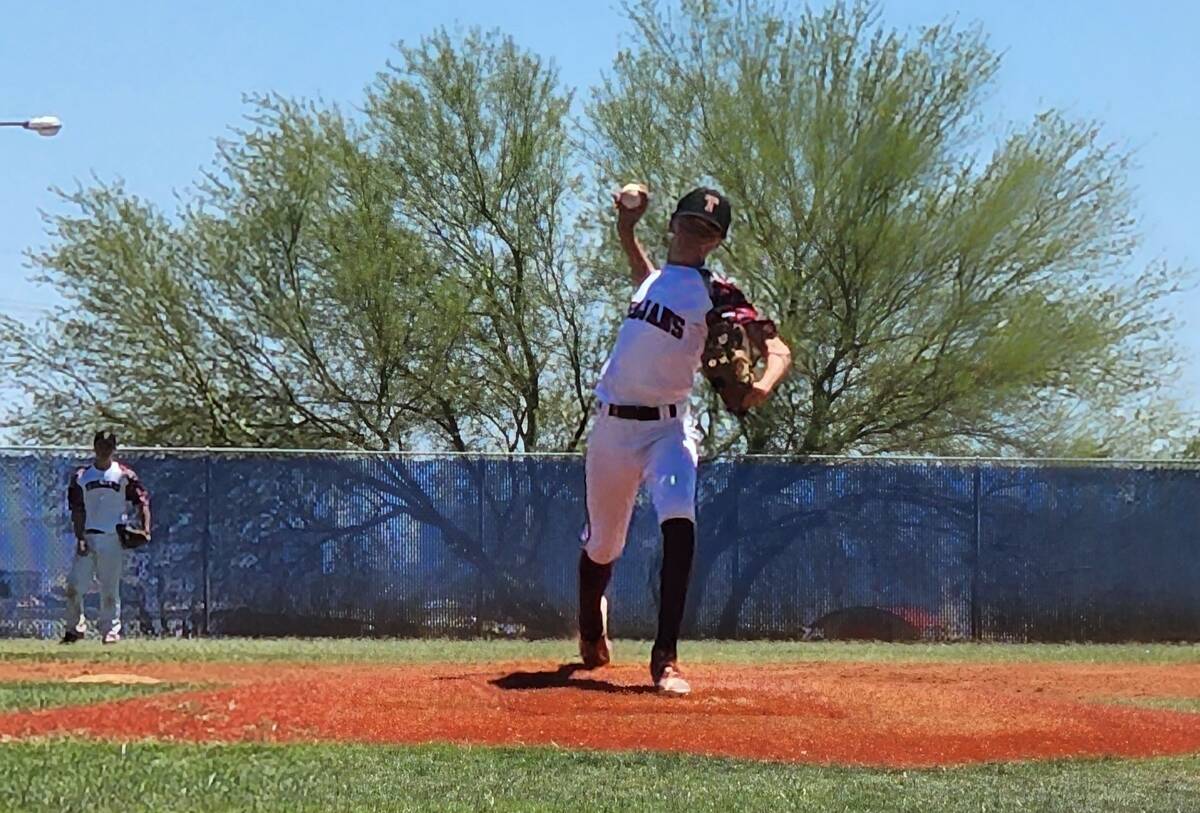 Danny Smyth/Pahrump Valley Times Benjamin Cimperman is getting ready to deliver a pitch while his teammate looks on during Pahrump Valley's U16 game against Sierra Vista High School on Sunday, July 3, 2022.

The Trojans had two teams travel to play games in Las Vegas – a U16 and a U18 team.

The U16 team played two doubleheaders over the weekend, beginning with a two-game series against Faith Lutheran.

Pahrump Valley High School head baseball coach Roy Uyeno mentioned that a lot of the players on the team were in the range of 14-15-year-olds. Quite a few of the players had just participated in the Little League All-Stars tournament the week prior.

In their first game of the double-header against Faith Lutheran last Friday, Pahrump Valley jumped out to an early lead, however, they weren’t able to hang on.

Cody Friel pitched well for the Trojans against the Crusaders.

In the second game against Faith, things went differently for the Trojans. Even though they didn’t come away with the win, Pahrump kept the game close and even came from multiple runs down to take the lead in the fourth inning.

The Crusaders were just too much for the Trojans, and ultimately won the second game by a score of 10-8.

The U16 team’s doubleheader on Sunday went much the same way. This matchup was against Sierra Vista High School.

The Trojans dropped both games, losing by the run-rule each time.

Despite having a lot of younger players, Pahrump’s U16 team showed flashes of good play and strong batting over the course of the four games.

With a couple of years for growth and maturity, on top of getting more experience, Uyeno and his staff will be able to get this group of kids better prepared in the years ahead.

The U18 team suffered the same fate as the U16 team.

They went 0-4 in their matchups. The Trojans played Faith Lutheran’s U18 team on Saturday night, then followed that up with a doubleheader against Durango High School on Sunday night.

Uyeno mentioned that he had just one player from PVHS’ varsity team on their U18 team. Other players from the high school’s team were playing for the club team.

Pahrump Valley will have a couple more matchups in the coming days. They’ll travel to Centennial High School this Saturday, July 9, for a doubleheader beginning at 5 p.m.

After that, they’ll be back at Faith Lutheran on Monday, July 11, this time just for one game. That game will begin at 7 p.m.

Their final game will be on Tuesday, July 12 when they head to Sierra Vista again for one game beginning at 5 p.m.