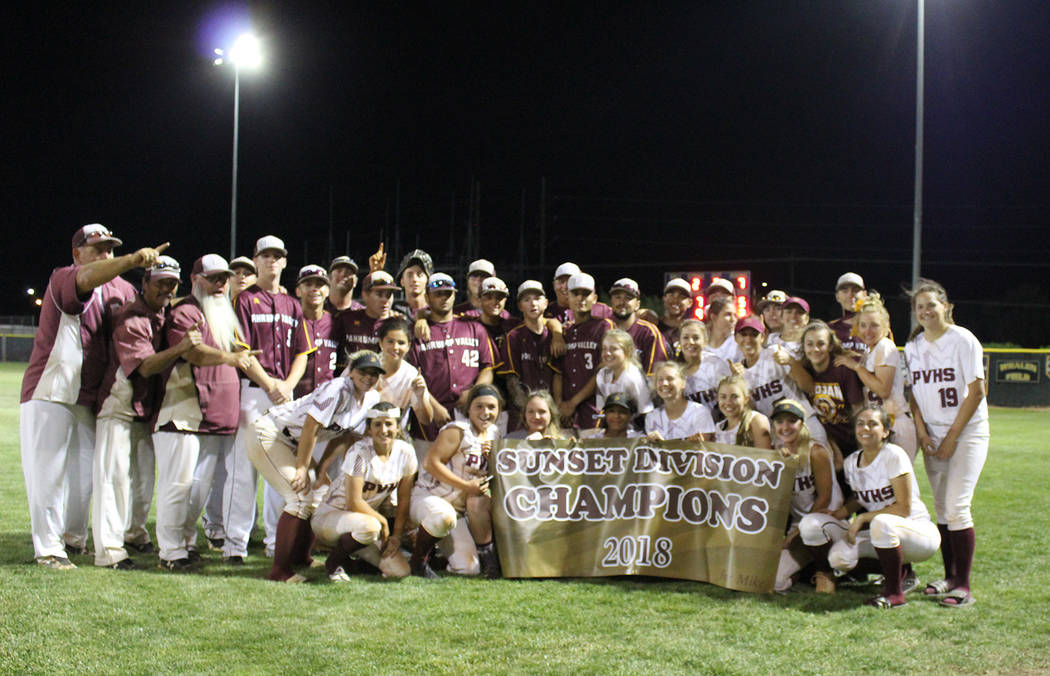 Cassondra Lauver/Special to the Pahrump Valley Times The Pahrump Valley baseball and softball teams celebrate each winning the regular-season Sunset League title and qualifying for the Class 3A state tournament on Friday night in Boulder City. 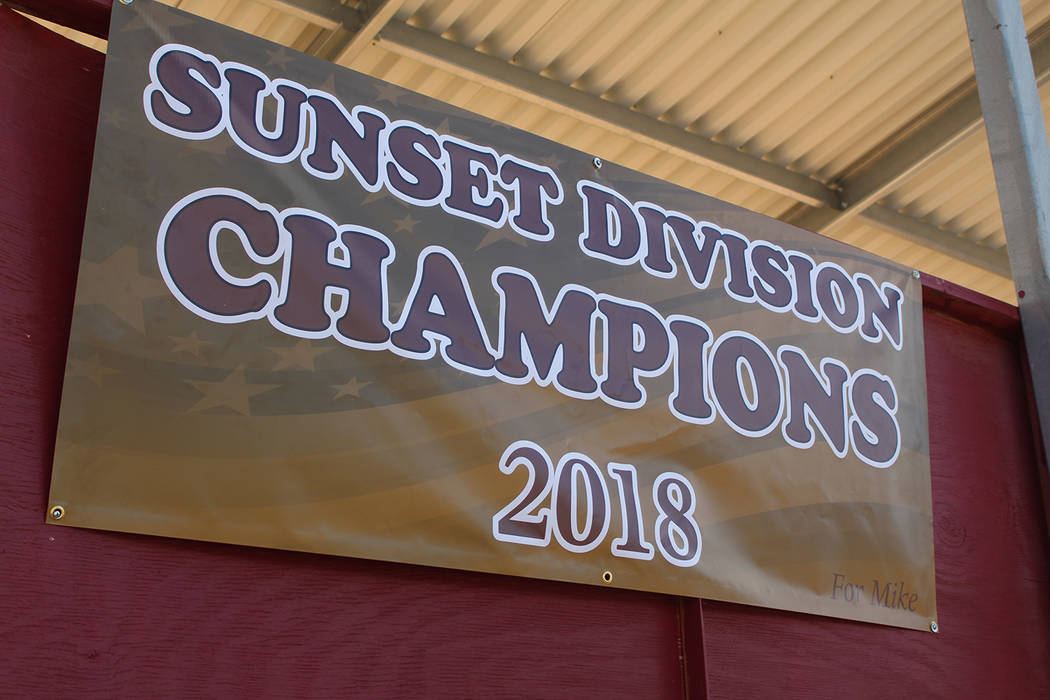 Tom Rysinski/Pahrump Valley Times The 2018 Class 3A Sunset League banner was already hanging Monday from the back of the bleachers at the baseball field at Pahrump Valley High School.

The Trojans fell behind in every game they won, including a seven-run deficit in an elimination game, yet lost a game they led 3-0 going into the final inning. But the end result is a trip to the Class 3A state tournament for the first time in Hayes’ six-year tenure.

Going into the tournament, the Trojans were a confident bunch. They ended the regular season on an eight-game winning streak and were winners of 11 of their past 12 games.

“I felt really good about it, because we had been playing pretty good baseball,” said Garrett Lucas, one of five seniors on the Pahrump Valley roster. “We were playing, I thought, the best baseball I’ve seen from our program the week before the playoffs. Going into that regional tournament I thought we were going to do fine.”

“I think we were pretty confident, knowing that we beat most of the teams in the tournament,” agreed senior Anthony Charles.

Then the craziness began.

The roller coaster Hayes referred to was at its wildest Thursday and Friday. After scoring single runs in the sixth and seventh innings for a 4-3 win over Tech on Tuesday and scoring five times in the bottom of the fifth for a 6-5 win over Virgin Valley on Wednesday, the Trojans were cruising along with a 3-0 lead Thursday over longtime nemesis Boulder City.

Then the roof caved in, as a two-run double followed by walks and a passed ball forged a four-run seventh-inning rally that landed the two-time defending champion Eagles back in the states and left the Trojans needing to win an extra game to join them. The defeat, which wasted 5 1/3 scoreless innings from Jalen Denton, was a bit of a shock for a team that was getting used to doing that kind of thing to its opponents.

“At the end of that game I think we were feeling kind of pressured,” said Anthony Charles, one of five seniors on the Pahrump Valley roster. “We weren’t used to being in the position that we were in, and we kind of let the pressure get to us.”

“It was a disappointment. I’m not going to lie,” added senior Garrett Lucas. “I just knew I’d get over it and focus on the next game and be prepared for whatever was coming.”

What was coming was a Virgin Valley team focused on avenging the Wednesday loss after staying alive with a 9-7 win over Chaparral earlier Friday. The Bulldogs trotted out their top two pitchers to face a Trojan team potentially suffering a hangover following Thursday’s brutal defeat.

“I think it was a combination of both,” Hayes said. “The first inning we looked like we were still thinking about Thursday. I’ll be honest. As a coach, in the fourth inning I was thinking how we should have had this squared away yesterday.”

Whatever the reason, Virgin Valley took a 7-0 lead into the fifth inning as Pahrump Valley looked dead in the water. But with their season hanging in the balance, and the Bulldogs forced to go to their bullpen because of pitch counts, the Trojans put together one of the weirdest rallies of the season.

Chase McDaniel started the bottom of the fifth with a single that proved to be the only clean hit of the inning. A hit batter and an error loaded the bases, but two quick strikeouts seemed to stem the momentum. But the Bulldogs’ bullpen and defense weren’t up to the task. An infield grounder, rather than ending the inning, went for a run-scoring error. A walk and a wild pitch cut the lead to 7-3 before another walk reloaded the bases and forced a pitching change.A balk before the next pitch made it 7-4 and brought up Joey Koenig, who launched a fly ball to right that looked destined to be a great running catch, but the ball popped out. Suddenly, it was 7-6.

An inning later, two walks, a single, an infield error and two groundouts produced three runs, and, after a shaky top of the seventh that saw two seeing-eye singles and a walk load the bases, Bradda Costa closed out the Bulldogs and the Trojans were in the states. “I think we were just counting on getting their ace and their No. 2 guy out,” Garrett Lucas said. “I think they just took their foot off the gas pedal, and we jumped on it.” While comebacks have become the hallmark of this year’s Trojans, falling behind is a habit they would like to kick.

“It’s been an emotional roller coaster for everyone — kids, us, parents. I’ve never been in something like this before,” Hayes said. “It’s mostly because we make it hard on ourselves no matter what we’re doing. If we could just shore up some of the things we’re struggling with, it would be a lot easier.”

“I think we’re a little bit slow on adjusting,” Garrett Lucas said, chuckling a bit. “Then, whenever we hit our stride, we hit it strong. We adjust well, but it takes time.”

The bottom line is the Trojans are one of the last four teams standing in Class 3A.

“We’re definitely not doing the best we can right now,” Charles said. “As a team, we can all do better. I just think we have to shore up some things. For me, it makes me more confident that we can go up to Reno and win the whole thing.”

Pahrump Valley will continue Class 3A state tournament play at 10 a.m. today against either Boulder City or Truckee at Galena High School in Reno.