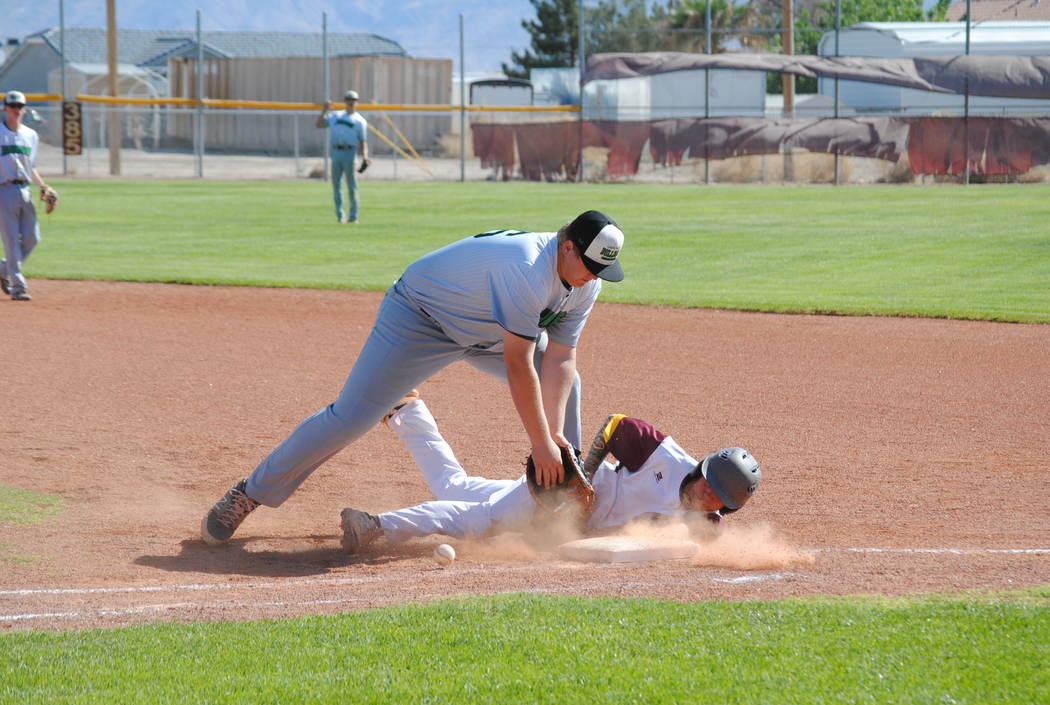 Charlotte Uyeno/Pahrump Valley Times Pahrump Valley's Joey Koenig gets back to first base safely on a pickoff attempt during the Trojans' 6-5 victory over Virgin Valley on Wednesday in the Class 3A Southern Region playoffs in Pahrump. 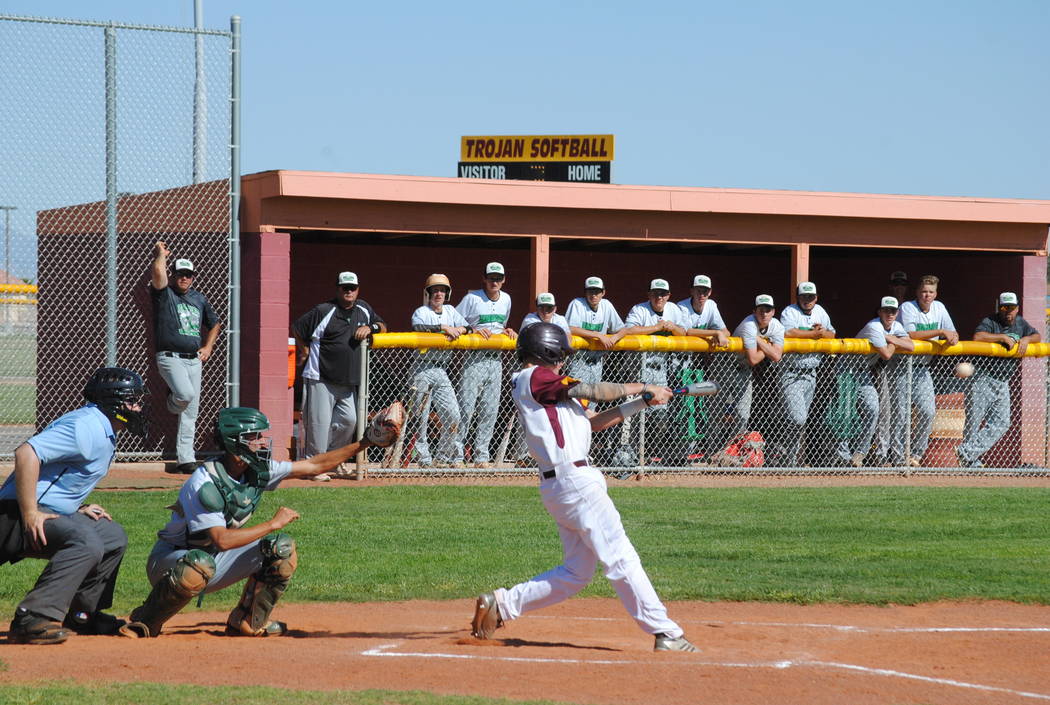 Charlotte Uyeno/Pahrump Valley Times Chase McDaniel's RBI double capped a five-run rally in the bottom of the fifth inning that carried Pahrump Valley to a 6-5 playoff victory over Virgin Valley on Wednesday in Pahrump.

Kardiac Kids is a moniker first pinned on the 1980 Cleveland Browns, who had a habit for pulling out football games in the final minutes on their way to their first playoff appearance in eight years.

Those Browns have nothing on this year’s Pahrump Valley baseball team.

One day after scoring a run in the sixth and a run in the seventh for a 4-3 win over Tech in the opening game of the Class 3A Southern Region Tournament, the Trojans rallied from a 5-1 deficit to post a 6-5 win over Virgin Valley to move into the winners’ bracket final.

“We’ve kind of been that type of team,” Pahrump Valley coach Brian Hayes said, pointing to rallies against Mojave, Cheyenne and Boulder City. The last was especially wild, as the Eagles took an 11-1 lead and still led by seven going into the bottom of the seventh before the Trojans erupted for seven runs to force extra innings in a game that would end in a tie back on April 3.

This time, Pahrump Valley (18-13-1) didn’t wait quite as long to turn the tide, pushing across five runs in the bottom of the fifth.

After a pitching change, Bradda Costa hung in on an eight-pitch at-bat that ended with an RBI single. Joey Koenig followed with single to tie the game, and Chase McDaniel’s double put the Trojans ahead 6-5.

The ability to beat quality pitching and the ability to play several days in a row was in Hayes’ mind when he put together the regular-season schedule. The Trojans played four games each of the last two weeks of the season, mixing in four games against Class 4A opponents with their final four Sunset League games.

“That’s why we faced Bonanza, Legacy and Durango, so we’d be used to seeing good pitching,” Hayes said. “We specifically scheduled those games. We got in the playoffs last year and weren’t used to playing that many games in a row.

“Other coaches would ask, ‘Who made your schedule? Four games in four days?’ And I said, ‘I did.’ “

After taking the lead, the Trojans turned to Havel, who closed out Virgin Valley for the second time this season, striking out five of six batters, including the middle of the Bulldogs’ order, to seal the win. In the teams’ first meeting, Costa also went five innings before Havel struck out the side in the sixth and put the Bulldogs down in order in the seventh for the save.

“Cyle has thrown maybe 12 or 13 innings, but he’s throwing high-pressure innings,” Hayes said. “We had Ian MacRae ready to throw, then all of a sudden we score five, so we get Cyle loose. He basically tells us to give him time to get loose and he’ll be good to go, and he’s basically proven that the past few games.”

Costa allowed three earned runs and earned the win thanks to the fifth-inning rally.

There was no such offensive explosion in the tournament opener against Tech, as Garrett Lucas scored the winning run on an error in the bottom of the seventh. He also tossed a complete game, scattering five hits with seven strikeouts, one walk and no earned runs.

“We made a couple of miscues behind him early, but after that he was lights-out,” Hayes said.

Havel scored the tying run in the sixth, hitting a double, taking third on a grounder by Floyd and scoring on a double by Charles.

The double-elimination tournament moves to Boulder City for the losers’ bracket semifinal and final today and the championship Saturday. The top two teams will advance to the Class 3A state championship May 17-19 at a site to be determined.