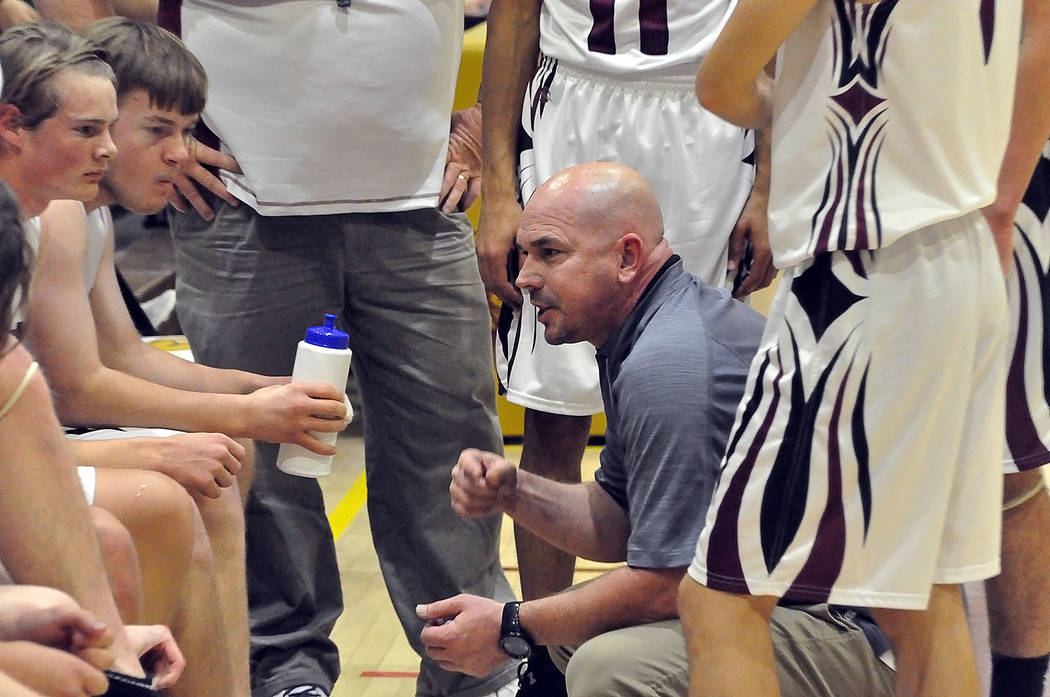 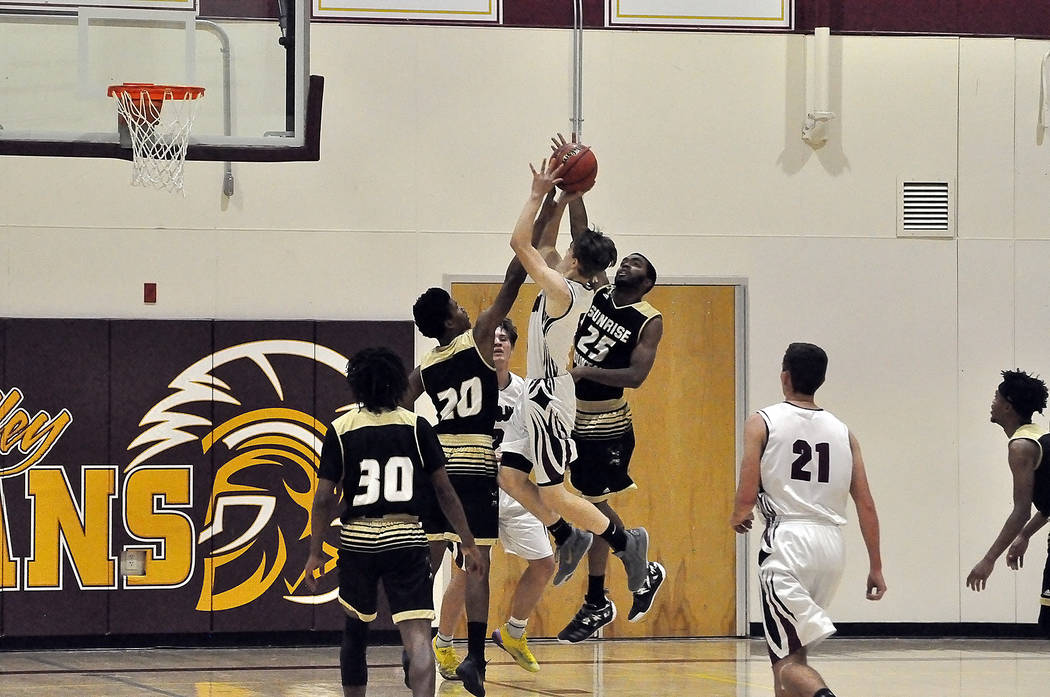 One quarter into Friday night’s boys basketball game between Sunrise Mountain and Pahrump Valley, the Trojans looked all but dead.

Not only had the Miners taken a 21-7 lead, but one of their three top scorers, senior Chance Farnsworth, committed his third and fourth fouls during the final half-minute of the period.

To their credit, the Trojans didn’t pack it in, pulling within six points at halftime and trailing just three three times during the fourth quarter. But in the end, the Miners (5-6) had just enough to hold off the Trojans, 52-48.

“We came out down just like this against Lincoln County and never recovered, but against these guys we did,” Pahrump Valley coach Dan Clift said. “We came back, and that’s something good we can take from this, and also that we pressed a little bit. So those are two good things we can take away from this. Now we can work on not fouling out our big guys.”

Clift took some of the blame for the latter, although three of Farnsworth’s fouls came in a span of 1 minute, 6 seconds.

With Farnsworth on the bench with four fouls, five players scored at least one basket during a 14-6 second quarter that made it a 27-21 game at the half. Grant Odegard and Brayden Severt would finish with 12 points apiece to lead the Trojans, while Koby Lindberg added 9 and Logan Gavenda chipped in with 7.

“I’ve been telling those kids the last three, four games that we’re getting better, we’re doing things better,” Clift said. “Nobody panicked. Nobody’s looking at the score or discouraged by a slow start.”

The Trojans were bothered by the Miners’ press and were forced into numerous turnovers.

“Sunrise Mountain is an athletic team, and when we think we’re open we’re not open,” Clift said. “So we have to remind our kids that even a slight delay on making a 20-foot pass doesn’t work for us. We have to be smart, be disciplined and just run our offense.

“We speed up, they press us a little bit, and we struggle with that still. We’re talking about that constantly. What’s hard for us is we break the press and then throw the ball away.”

On the plus side, the Trojans were fairly effective giving the Miners a taste of their own medicine. The Pahrump Valley version wasn’t exactly the same defense Sunrise Mountain displayed, but a very active trap caused the visitors their share of problems.

“I think we broke even on that,” Clift said of the two teams’ pressure defense. “I worry about us being able to do that, so we go into a three-quarter-court press. We pick spots on the floor that we want to start that in so we can shorten up the floor.”

The tactic helped, as the Trojans stayed close to the Miners, who spend most of the third quarter trying to put some distance between the teams. But each time they opened it up a bit, the Trojans chipped away. When Moises Garcia twice scored on fast-break layups after the Miners’ press forced a turnover, Sunrise Mountain held a 40-31 lead late in the third.

But Farnsworth scored on a strong move inside, Odegard hit one of his two 3-pointers and the Trojans pulled within six. Then, early in the fourth, Odegard took over for about a three-minute stretch, taking a steal in for a layup, being fouled on another steal-and-score attempt and hitting both free throws, then getting fouled on a 3-pointer and hitting two of three free throws to pull the Trojans within 46-43 with 4:26 left.

With Clift urging the Trojans to be aggressive, the Miners again tried to pull away, with Cy’wan Joseph scoring twice inside for a 7-point bulge only to watch Severt and Lindberg respond with back-to-back strong moves inside. But chaotic plays in which the teams exchanged turnovers didn’t help, and while Severt was fouled on a putback and Farnsworth had a thunderous block of an inside shot after the Miners broke the press, there just weren’t quite enough good plays down the stretch to complete the comeback.

The Trojans head into the holiday break at 2-6, but Clift sees chances for success on the schedule after Jan. 1, and with his players showing they can run an effective trap and press, he is cautiously optimistic.

“We’re going to use that when we go to the Vegas Invitational, so we needed to do a little bit of that,” he said of the press. “We hadn’t done that all year, so I was pleased with that.”

The 15th annual Vegas Invitational will be hosted by Mountain View Christian (1-10), a 2A school against whom the Trojans will open tournament play Jan. 3 in Las Vegas.