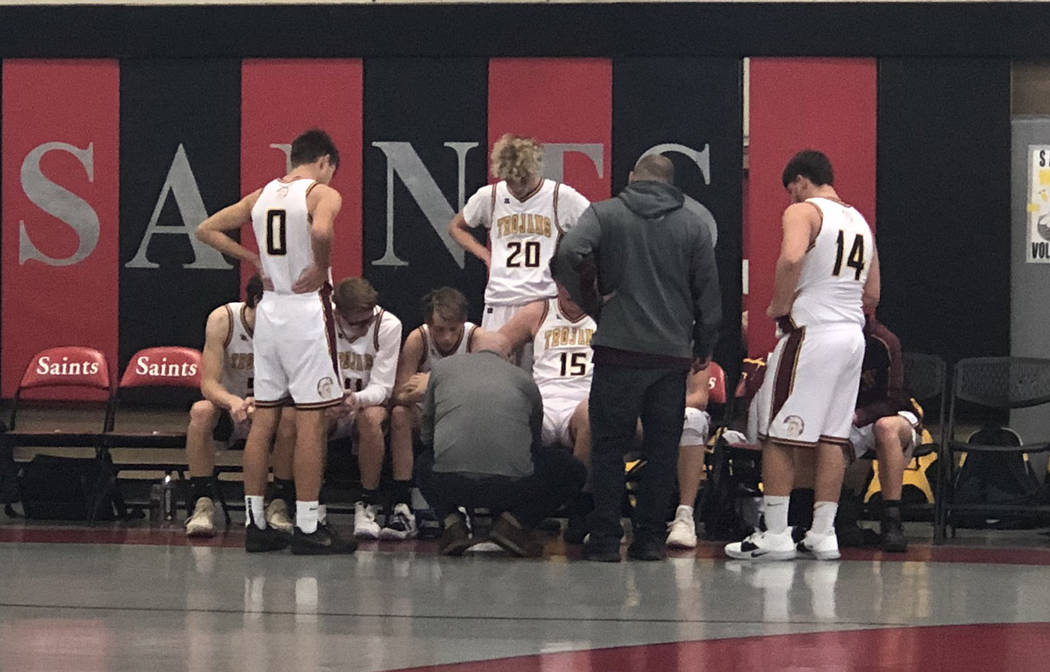 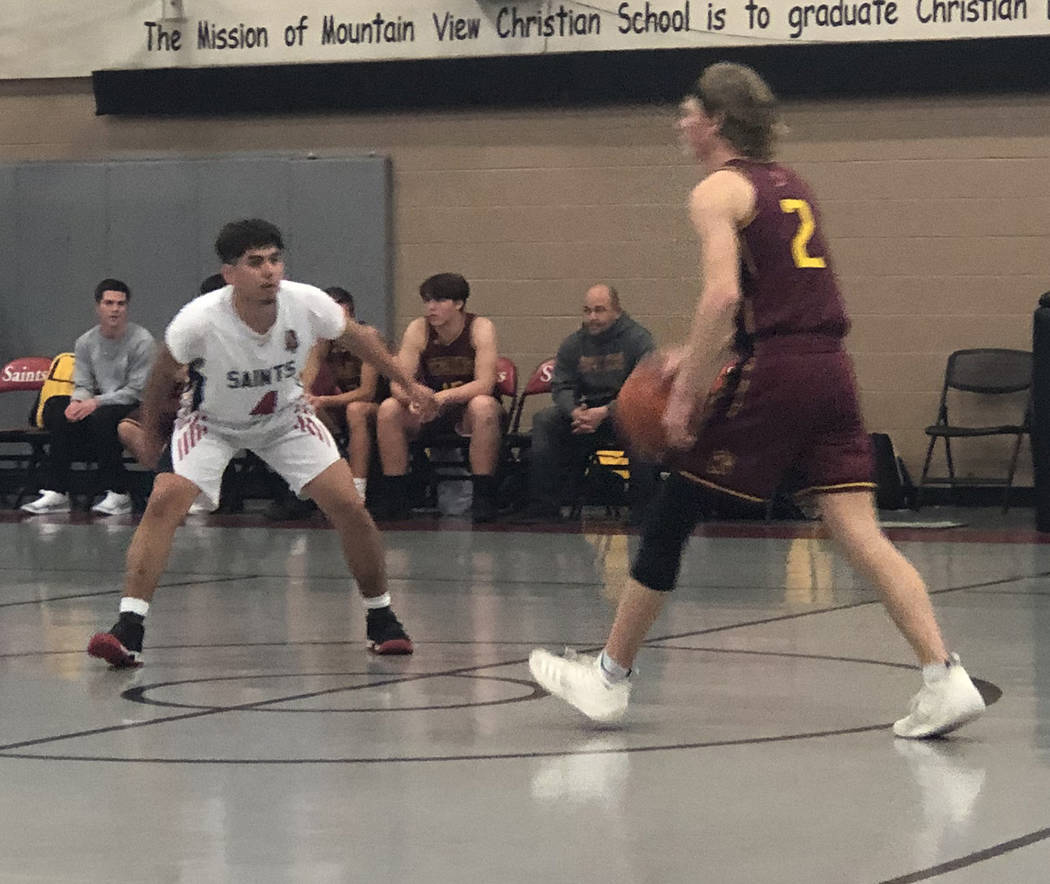 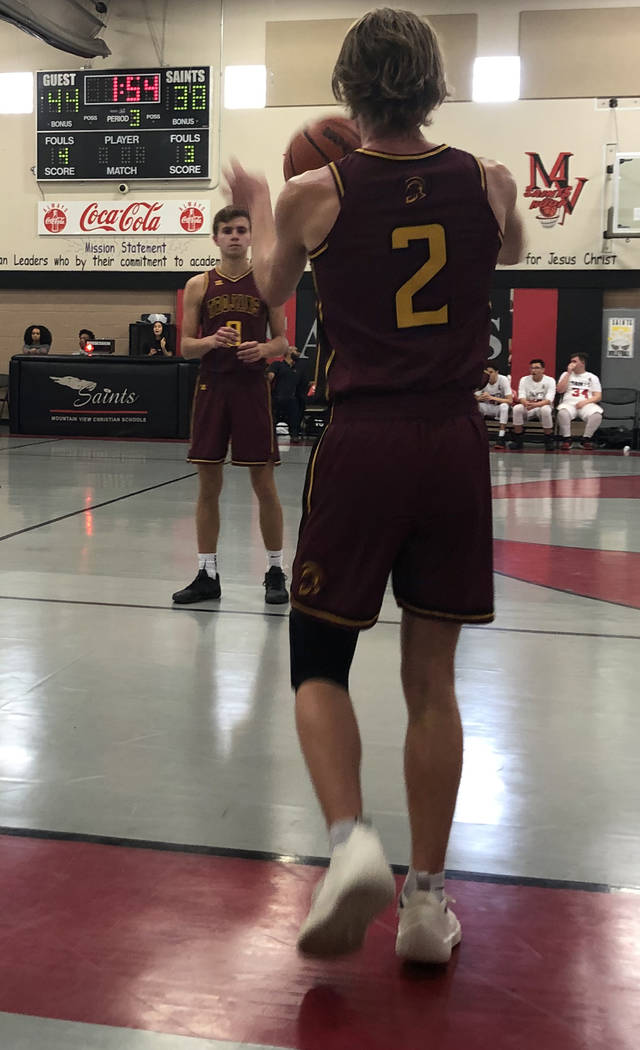 On the surface, there was nothing surprising about how the Pahrump Valley High School boys basketball team fared in the 16th annual Vegas Invitational at Mountain View Christian School.

After all, the Trojans were routed by 50 points in their opener against a strong California team, lost 58-35 to a decent team from Reno, then defeated Laughlin and Mountain View Christian, the worst two teams in the Class 2A Southern League, over the weekend.

But the opportunity to play teams they were not physically overmatched against gave Pahrump Valley’s players a chance to show what they can do, and there were some impressive efforts in those two Saturday wins.

The early game was mostly about Grant Odegard. The senior guard exploded for 32 points — including all 15 points the Trojans scored during the first quarter — to lead Pahrump Valley to a 55-30 romp over Laughlin.

“It’s unusual for me to get that many shots in a game, so kudos to my teammates for that,” Odegard said. “I guess it was just my day.”

Odegard was sensational, and it wasn’t just firing from long range. While he nailed six 3-pointers, defense played a part in his point total. During the first 2 minutes of the third quarter, Odegard made a steal and went in for a layup three times. Three times. In two minutes. A team that led 37-11 at halftime was up 46-11 at the 5:58 mark of the third and coasted home.

“He’s got good hands and anticipates really well,” Pahrump Valley coach Dan Clift said of Odegard. “Dressing eight guys, it was in our best interest to run the clock. If we didn’t, the kid could have had 50 in that game.”

The thin roster was because of a variety of reasons: kids going away over the holiday break, another at an all-star football game, Andrew Avena still coming back from his ankle injury — although he dressed for the Laughlin game in hopes of playing before realizing he wasn’t quite ready — and Koby Lindberg taking a blow to the head during Friday’s game against Wooster.

Playing short-handed didn’t hurt the Trojans in either game Saturday, and against the host Saints it wasn’t because of one guy carrying the scoring load. This time it was junior guards leading the way, as Logan Gavenda scored 18 points and Chris Briscoe chipped in 13. Odegard joined them in double figures with 12 as the Trojans won 52-45.

And younger players also made key contributions. Sophomore Dylan Severt proved to be an effective passer out of the high post on offense and a strong rebounder on defense, while classmate Syblue Glisson always seemed to be in the right place at the right time, either with a rebound or a pass.

Clift is excited about the potential in his younger players.

“His brother played for me, he was a great player for me, and I think he’s got the same kind of personality,” Clift said of Severt, whose brother, Brayden, graduated last year. “Blue, he’s got a great basketball IQ, and he loves basketball. He’s a tall, lean kid that plays about 5-10, and he needs to play about 6-1 or whatever he is. But he’s going to be fine.”

“Our young guys really stepped up during the Mountain View game,” Odegard said. “Logan and Chris became the offensive threats that we’ve seen from them in practice. Dylan and Blue hauled in offensive rebounds that gave us second- and third-chance shots, which helped us keep our lead in the second half.”

The lead was threatened several times, as the Saints — far more physical than Laughlin had been in the early game — kept pecking away. The Trojans led by seven after one and again at halftime, but Mountain View Christian pulled within 4 points early in the third and within 3 points twice later in the period.

But Briscoe hit a 3-pointer with 2:07 left in the third for a 44-38 lead, Gavenda opened the fourth quarter with a 3 off of a scramble after a missed shot, and Glisson put in a layup off of a pass from Gavenda to push the lead to 49-38 and force a Saints timeout. The closest they came the rest of the way was the final score.

The Trojans had trouble handling Saints junior Carlton Moore, who scored 13 of his team-high 18 points during the second half. But otherwise, the Trojans’ defense was outstanding, both with pressure and in the half-court.

“The team as a whole always plays pretty good defense, but the effort against MVC was outstanding and fun to watch and be a part of,” Odegard said.

“I knew that we would do well,” Clift said. “We compete well against kids that are much more talented than us, that are much more physical than us. I understand the context of being a small school. Laughlin is a very small school, these guys here are small at Mountain View. You still have to come out and play. We’re all 16, 17-year-old guys.”

And those guys had a chance to work on things they just can’t do when matched up with players who are taller, faster and can leap out of the gym.